Obama, get ready for the "Clinton rules"

As Wednesday's awful debate proves, it won't matter who the presidential nominee is -- the press will play footsie with McCain and attack the Democrat. 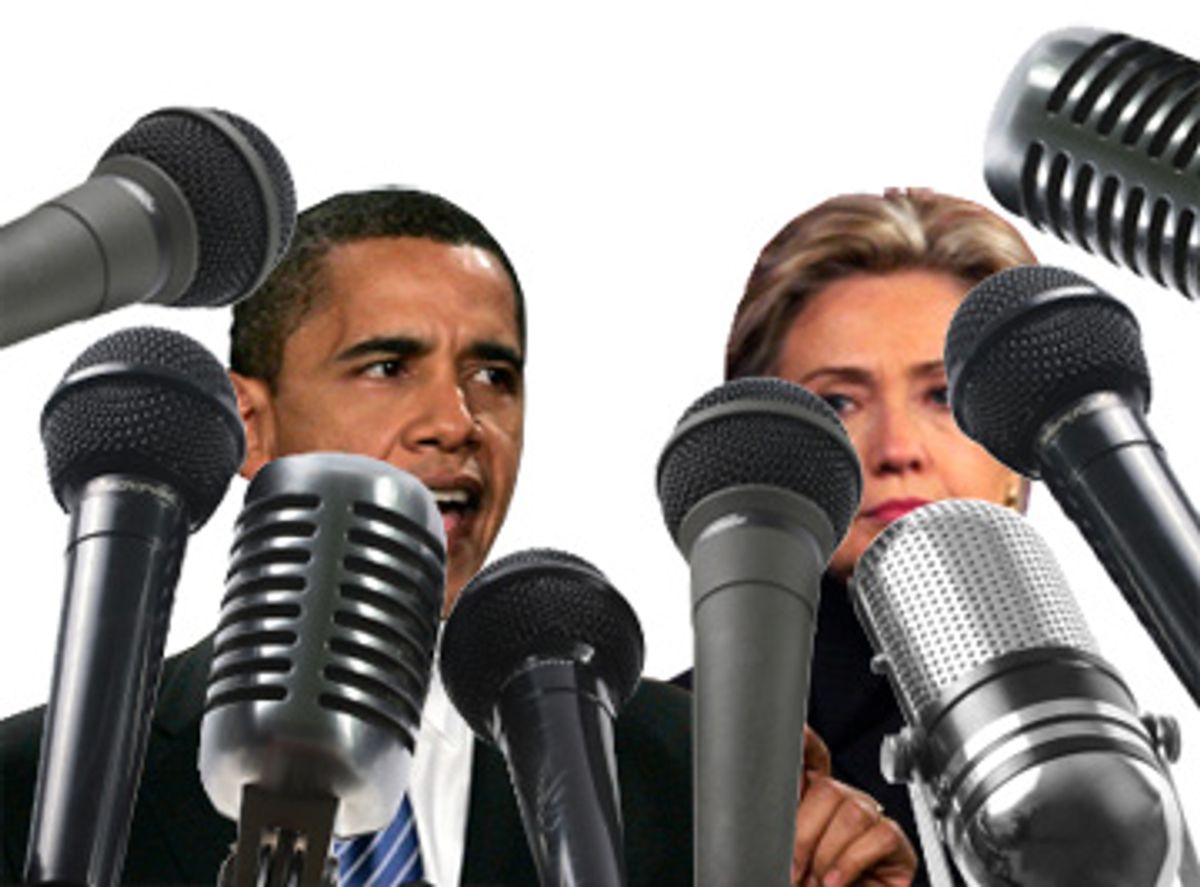 The sorry performance of ABC anchors Charles Gibson and George Stephanopoulos in this week’s final Democratic primary debate should serve as a signal of the coverage to come. Playing gotcha with Democrats and patty-cake with Republicans will remain basic operating procedure for the mainstream media this year, no different from the past half-dozen presidential campaigns -- except that the additional bias in favor of John McCain may make a bad situation worse.

And as Barack Obama should have learned during the debate’s first 45 minutes, if not before, the same fuzzy but obsessive focus on "character" that plagues Bill and Hillary Clinton will be turned on him with equal or greater ferocity by those who once claimed to admire him. He is now subject to the "Clinton rules," which have long permitted pundits, editorialists and reporters to indict the former president and first lady for sins that other politicians, mostly Republican, may commit with impunity (see Gingrich, Newt, first, second and especially third marriage).

Those slanted rules have guided coverage of Sen. Clinton during the past several weeks, notably in the controversy over her inaccurate version of her arrival in Bosnia a decade ago. How the game works can best be understood by comparing the firestorm over her remarks with the placid acceptance of blatantly self-aggrandizing falsehoods by certain venerated politicians of the other party.

Consider the example of the sainted Ronald Reagan, whose biographers report that he repeatedly claimed to have personally witnessed and filmed the liberation of Nazi concentration camps as an Army officer in World War II. There was no truth to this tall tale, although he may have seen such films and did serve in a Hollywood-based military filmmaking unit. In his memoir, the late Reagan aide Michael Deaver acknowledged his old boss' tendency to fabricate heroic stories that conflated movie roles and real acts of courage. Yet the members of the national press corps treated this curious habit as the cute and harmless behavior of a nice old man, rather than a presidential lie (which he uttered on at least one occasion to another head of state, Israeli Prime Minister Yitzhak Shamir). There was no attempt to force Reagan to recant and confess, as Sen. Clinton has done more than once under pressure from the press.

Or consider the free pass afforded to George W. Bush, who escaped accountability for an obvious deception about his past in both of the last two presidential elections. While Bush's National Guard record became a contentious issue, scarcely anyone in the national press bothered to analyze the bogus version of his service that appeared in "A Charge to Keep," the 1999 Dubya campaign "autobiography" (written by Bush aide Karen Hughes). In those pages he claims to have "continued to fly" with his Texas Air National Guard unit years after he actually had dropped out for failing to complete the required annual physical examination. For eight years the White House press conferences came and went, without a single question from the assembled reporters about that glaring lie.

By contrast, Sen. Clinton wrote an accurate account of her landing at Tuzla Airport in "Living History," her bestselling memoir, which suggests that the over-dramatized version she recalled more recently was more a mistake than an intentional lie. But with her, the mainstream media will always tend to assume the worst -- a matrix of suspicion rarely inflicted on GOP politicians like Reagan, Bush or McCain.

Why otherwise would the campaign press corps have demanded the Clinton tax returns while nobody insists that McCain release the returns filed by him and his beer heiress wife, Cindy? When the Arizona Republican releases his 2007 return, as he has done today, will anyone urge him to cough up returns from previous years, as the Clintons did? It is an act of transparency that he has neglected to fulfill for the past quarter-century of his public service, without a peep from his press fans (despite the precedent of his wife's highly questionable shopping-mall investment with savings and loan crook Charles Keating).

And having raked Bill Clinton's charitable foundation for evidence of conflicts of interest, when will the press corps take another look at McCain’s "Reform Institute," the nonprofit think tank that has served as a soft-money conduit and cushy sinecure for his political advisors?

Will anyone ask McCain why he doesn't wear an American flag pin, the burning question that the ABC anchors pressed on Obama? Perhaps the former POW deserves a pass on that issue, but it is interesting to note that photos of McCain with a flag pin are very scarce -- which may simply prove that not every patriot must constantly sport Old Glory on his lapel.

It would be refreshing to place the likes of Gibson and Stephanopoulos and their peers on the witness stand for a change to explain their choices and prejudices. Why did they require Democrats to make tax-cutting pledges that are based on bad economics and worse journalism? Why should they focus on Obama's tenuous connection with a reprehensible but inconsequential figure like former Weatherman Bill Ayers, when they have never mentioned the White House coddling of Cuban exile terrorists? Why do they obsess over the "bitter" gaffe by Obama while passing so lightly over the confusion of Sunni and Shia groups by McCain, supposed master of foreign policy?

Details may be different but the double standard remains the same. If the coverage of this election already induces a nauseating sense of déjà vu, be warned. It will only get worse.