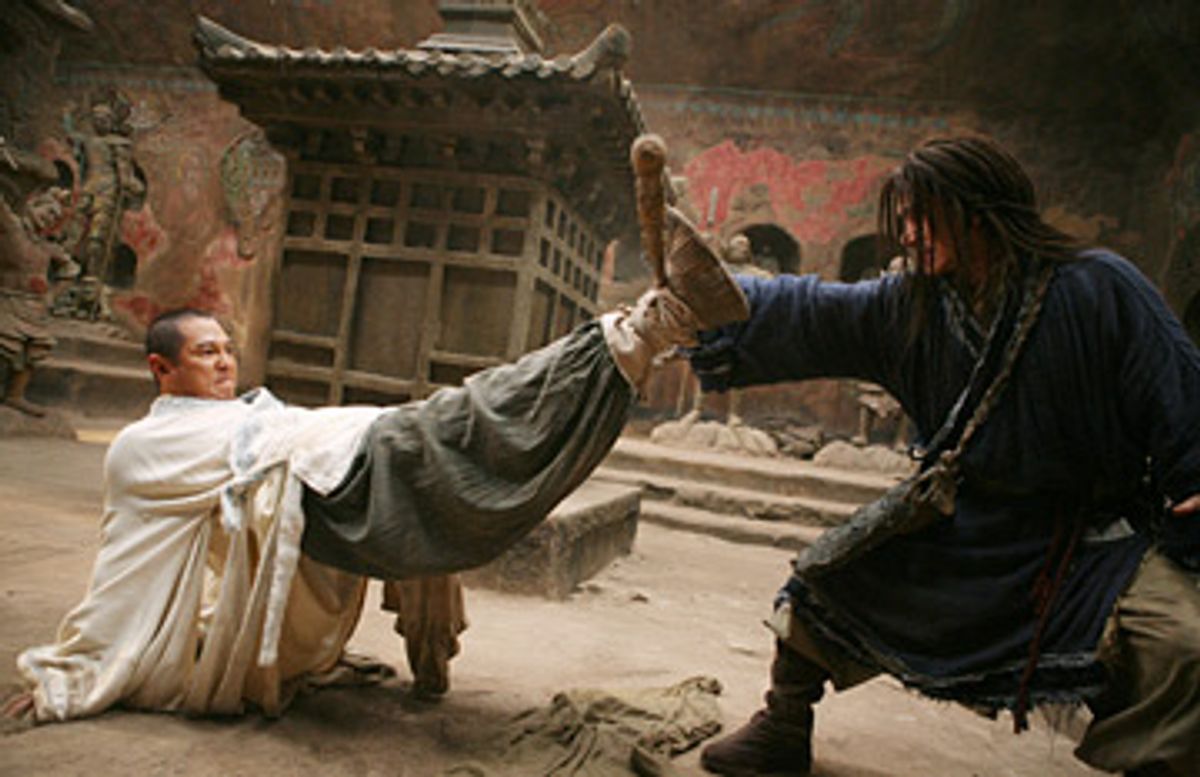 Jackie Chan has said for more than 10 years that he's wanted to work with his friend Jet Li, but plenty of fans probably figured they'd have long white beards -- or long white hair -- before the two action stars finally got together. With "The Forbidden Kingdom," it's finally happened. In this adventure-fantasy -- and love letter to the conventions of martial-arts movies -- Chan and Li each have dual roles: Chan plays an elderly Bostonian shopkeeper and a "drunken master" for whom wine is an elixir of strength. Li plays a monk well-versed in the martial arts and, even more magnificently, appears as the wiry, mischievous Monkey King, a mythical Chinese figure with the ability to transform himself into 72 different animals or objects. The bad news about "The Forbidden Kingdom" is that the picture built around these two stars -- it's directed by Rob Minkoff, who made the wonderful "Stuart Little" movies, as well as "The Lion King" -- isn't quite worthy of their skill and charm, and the plot is far more convoluted than it needs to be. The good news is that the picture is so good-natured, it's easy enough to disregard many of its flaws. "The Forbidden Kingdom" is lavish in its approach -- it attempts some rather extravagant battle scenes -- yet it still seems modest in its goals: It's more interested in being a Saturday-afternoon entertainment than a blockbuster.

Jason Tripitikas (Michael Angarano) is a shy Boston teenager who adores martial-arts movies, renting them from a sleepy little store in Chinatown run by the elderly firecracker Old Hop (Chan). In the backroom of Hop's dusty store, Jason finds an antique bowstaff; a mystical turn of events sends him back in time -- and to China -- to return the staff to its rightful owner. His allies in this dangerous mission are two men he meets in his travels there: Lu Yan (Chan), who's constantly swigging from his jug of wine, and the Silent Monk (Li), a serene figure in flowing white robes who is also a skilled fighter. Jason also meets a beautiful young warrior maiden named Sparrow (Liu Yifei), whose mission, it turns out, dovetails with his own: Both of them must fight the Jade Warlord (Collin Chou) and Ni Chang (Li Bingbing), a fierce, ambitious beauty whose streaming white tresses are part of her weaponry. By vanquishing them both, Jason will be able to free the long-imprisoned Monkey King (Li).

Confused yet? You will be. The story, written by John Fusco, is a mishmash of Chinese legend, literature, films and TV shows that barely holds together. The Monkey King is a figure in the Ming Dynasty novel "Journey to the West," and his exploits have been dramatized in everything from opera to TV shows. "The Forbidden Kingdom" also includes references to numerous Hong Kong action classics, among them Ronnie Yu's magnificent 1993 "The Bride with White Hair" (which was itself based on a 1950s novel).

But the befuddling plot doesn't keep "The Forbidden Kingdom" from being an enjoyable spectacle. The picture's attempts at humor don't quite work: The banter between Li and Chan could use some more polishing from the director, partly because while Li and Chan speak English reasonably well, their hesitancy prevents their timing from being as crisp as it needs to be. Their martial-arts skills aside, though, both Li and Chan have already proved to be marvelous actors: Chan's comic charms won't wear out even after his body has slowed down, and Li, in pictures like "Jet Li's Fearless" and "Unleashed," is such a magnetic, sensitive presence that he doesn't even need to fight to hold our attention.

That said, the fight sequences involving Chan and Li in "The Forbidden Kingdom" -- which were choreographed by the great Woo-ping Yuen, the man behind the action in the "Matrix" and "Kill Bill" movies -- are thrilling to watch. As they challenge each other, there's more joy than aggression in their graceful contrapuntal kicking, their swift, responsive jabs. When Chan and Li match wits, each celebrates the other's presence. This isn't just a martial-arts display; it's generosity and camaraderie in motion.