How I learned to stop worrying and love the recession

The market's in a slump and America's heyday is long gone. But I've found comfort in being a coupon clipper. 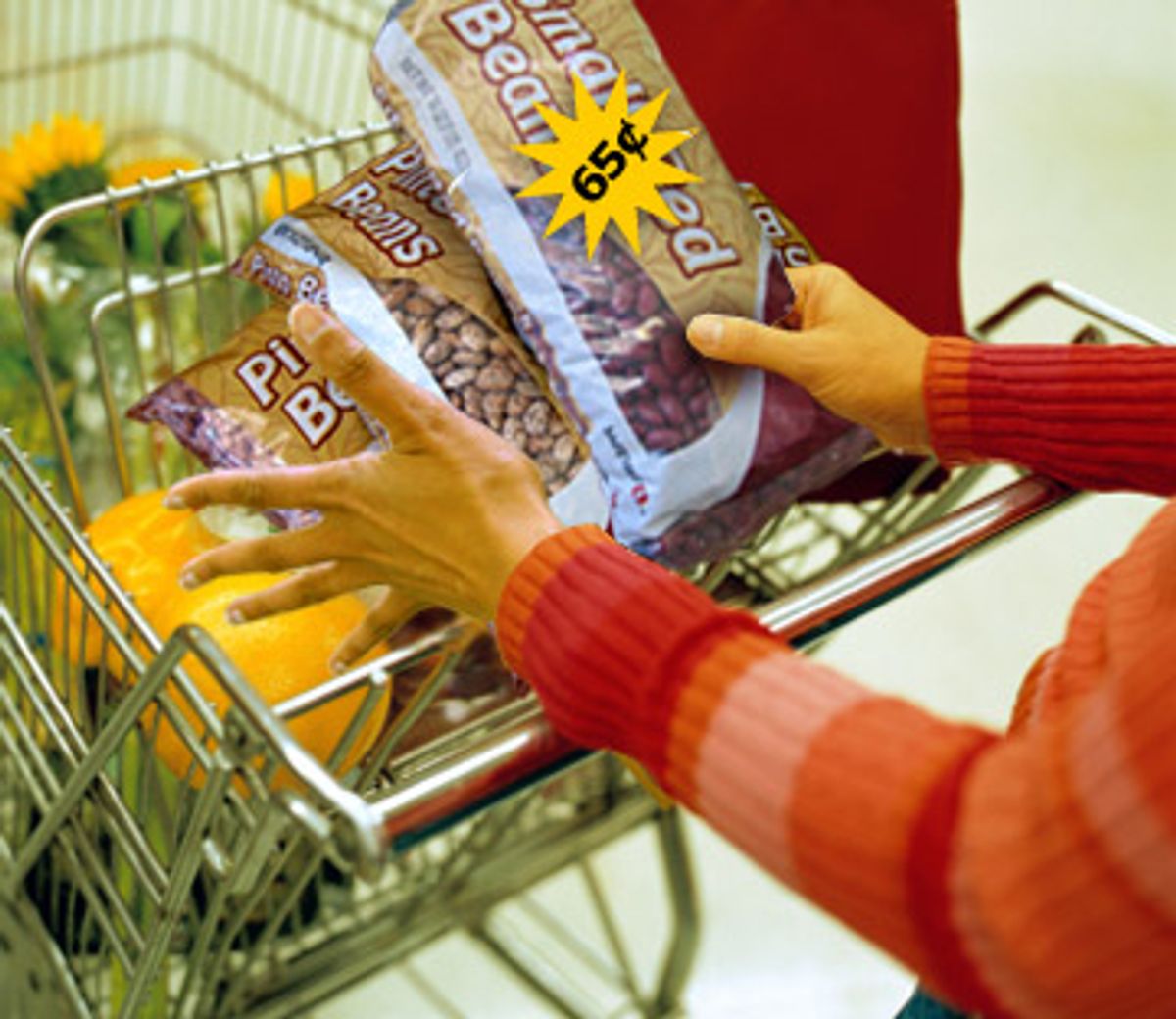 Lately I've been buying beans. Not canned beans, mind you: Dry beans. Bags of dry beans that only cost 65 cents, beans that have to be soaked overnight, beans that you have to sort very carefully to make sure there aren't any chunks of gravel in there.

This is my response to an impending recession, my move to scale back and batten down the hatches for the coming economic storm. Because, like so many of us, when I read about the subprime mortgage crisis and the Fed's $30 billion loan to Bear Stearns and the complicated credit default swaps that sophisticated market analysts claim even they don't understand, I picture our once-great nation as a shaking, teetering house of cards. I feel certain that America's heyday has come to a close, that the cocky overspending and luxurious indulgences and service-economy boom times are gone for good. When I read about hidden, complex, unregulated financial markets and peak oil and the rising cost of gas and food, it all dovetails perfectly for me with the news that "Dancing With the Stars" and "American Idol" are enormous hits, that Britney Spears is staging yet another comeback and that fighting rages on in Baghdad. Inferior cultural exports, abysmal international relations, dwindling hope on Wall Street ... Rome is falling. It's time to buy dry beans.

I'm sure I sound like one of those tender-pawed yuppies who shops at Whole Foods and buys $15 grilled salmon salads and $9 cups of prepackaged butternut squash soup prepared fresh by Wolfgang Puck's foodie minions, eats it all in one sitting, then laments that her grocery bill is too high.

But that's not me, my friend -- although I sometimes wish it were, as I drop a boneless pork shoulder the size of a handbag dog into my slow cooker. No, I'm just a regular, middle-class chump with a sizable mortgage and a husband who's hardly saved anything for retirement and a toddler who drinks organic milk and a stepkid who wants to go to college and two dogs who require almost monthly visits to the vet. Once I considered myself (as so many of us do when we're young and stupid) destined for a life that bordered on glamorous. I'm not saying that I believed with all of my heart that I'd be wealthy or that I felt entitled to huge tracts of land, but really, who knew? I figured I might meet a dashing young heir in line at the taqueria one day, and the next day I'd be flying off to the South of France to dip my toes in the crystal blue Mediterranean while nibbling on fine wine and really good cured meats and aged cheeses. These days, though, I'm old and I need a haircut and all I really want is a good recipe for black bean soup.

Which brings us back to the bean aisle at my grocery store. This is my new therapy (since I can't afford the old kind): shopping for alarmingly cheap yet nutritious foods. It's relaxing, somehow, to stand there in front of those bags -- 33 cents for split peas! Amazing! -- fantasizing about how my family will eat only beans from now on: chilis and bean burritos (Homemade tortillas! Just flour and water!) and bean soups, whole meals that cost less than $3 to make, that might feed the family for days on end. As I escape into a hazy daydream of delicious gourmet bean concoctions, all of which are practically free, I suddenly become aware that I'm not alone.

There's a stout, pragmatic-looking woman standing next to me, fondling a bag of 15-bean soup mix. "This looks pretty tasty," she says somewhat suspiciously, half to herself and half to me. "Fifteen beans!" She breathes those words -- "Fifteen beans!" -- in the same tone most people would say "five-course meal!" or "three-week vacation!" And then she just stands there, fondling and sighing for a full minute, like she's gazing out at the Mediterranean, snacking on a delightful array of cured meats and aged cheeses.

"That does look pretty good," I say, sociably picking up the same bag. It feels good to talk to a stranger about beans. I'm not only buying beans, you see, I am discussing various bean-related options with other bean buyers.

Then the woman notices the $2.69 price tag. "Too expensive!" she announces, and slaps the bag back onto the pile like it's covered in maggots. I stare at the bag in my hand guiltily. It looks really good, actually, and $2.69 doesn't seem like that much to spend. Then again, all of the other bags of beans are 50 or 80 cents, which means that $2.69 is downright criminal. "You're right!" I say, putting back my own bag. "You have to buy beans at the Mexican grocery store. They're cheaper," she tells me as she wheels her cart away.

For the rest of my shopping trip, I try to think like the woman who refused to pay too much for beans. Four dollars for half a gallon of milk? Isn't that obscene? $2.99 a pound for pears? Maybe my kid should try to develop a taste for apples. I steer clear of the aged-cheese-and-cured-meat aisle completely, fearing temptation.

This picture might seem sort of droopy and pathetic to some of my friends, who would feel as deprived as Haitian boat people if they couldn't afford their regular $70 bottles of Erno Lazlo moisturizer. But honestly, I've found my newfound role as recessionary coupon-clipper oddly soothing.

What I'm allergic to are the boom times. Reading about a "return to glamour" and lifestyle coaches and vaginal rejuvenation made me break out in hives. Sept. 11 was supposed to make us all more down-to-earth and more honorable -- you know, the way World War II traumatized the so-called Greatest Generation enough to put down the bottle and stop beating up the little Mrs.? We were supposed to choose valiant, heartfelt, courageous paths, to give of ourselves like never before, to come together as a nation. Instead, most of us have spent the last seven years monitoring Nicole Richie's eating disorder. We haven't been volunteering or running for political office, we've been reorganizing our walk-in closets and talking on the phone about the ideal age to start Botox. As the economy soared, there were far too many options available to us, but we were all whiny and depressed over it nonetheless. Wasn't it sort of lame and bourgeois to work for a living, after all? Wouldn't it be much nicer to spend all our time shopping and getting spa treatments like those women in Paris Vogue? Just a few years ago, charging too much on our credit cards seemed like a really prudent way to rack up enough frequent flier miles for a round-trip ticket to Italy. The only pressing, heavy question we faced was whether or not we should sell our houses for a hefty profit and retire to Costa Rica to start an organic milkweed farm.

Personally, I'm happier when my options are limited. I like knowing that I can't afford to move and I can't afford to quit my job and I can't afford to think about the boundless possibilities that the universe has to offer, I can only afford to clean my own stupid house and eat leftovers and lose weight so the shitty clothes I already have don't look even worse on me than they would otherwise. Under the duress of an economic meltdown, I have to learn to bake bread and grow tomatoes and hit up my friends for hand-me-downs for my kids.

I say bring it on! As long as people aren't nattering on about cosmetic surgery or their stupid kitchen remodels anymore, as long as the skyrocketing costs of food and gas will make us stop for two seconds to consider how impossible it is to feed a family these days on our laughable minimum wage, I'm on board. We may cheer when it looks like the economy is firing on all cylinders, and there's certainly suffering and unemployment in store when it's not, but the fact is that ballooning housing prices have made the American dream an impossibility for most Americans. And those who dared to dream, charging the good life on their credit cards and taking on enormous loans that were considered absolutely normal not so long ago, are painted as fools by the same scribes who breathlessly gushed over plasma TVs and department store couture and whatever else the pushers of high capitalism were peddling during the golden age.

But was it really so easy to be happy when the world was our stupid oyster? That relentless quest for perfection only makes me distracted and neurotic. I don't want to look around my house and think, "I really need to reorganize my closets and reduce clutter. Is it time for another trip to the Container Store?" or "Wouldn't walnut plank floors look better in here?" or "Maybe the cleaning lady should come twice a week instead" or "If we have another kid, we're going to need to add on a second story." I want to look around and, recognizing that I don't have the money to change a single thing or hire anyone to do anything, say to myself, "How lucky am I, to live in such a cozy little house, with two nice dogs (shedding on the couch) and a sweet little baby (scribbling in red crayon all over her white crib) and some lovely smells (55-cent pinto beans) wafting in from the kitchen?"

Because who knows how long these bad times (which we may eventually come to see as good times) will last? I can only assume that if America's downward slide continues, people like me who have no discernible marketable skills, who are paid to sit on our asses and type for a living, will eventually be forced to get real jobs, digging holes or tarring rooftops or picking apples or the like. My father was a professor of economics, so I know exactly how the demand for opinionated blowhards like myself dries up, replaced by a demand for janitorial staff and house painters. When I read about credit default swaps and a stumbling Dow, I don't sweat over my 401K. I wonder how I'll adjust to a life of mopping floors eight hours a day.

Will that be the end of the world? Probably not. But I'd better start saving regardless, and so should you. America's not on top anymore, because we've been exporting nothing but lukewarm fajita platters and spray-tanned celebrity jackasses for decades now. The days of closet-reorganizing professionals and Botox parties and hiring a personal trainer for your nanny's personal chef are over ... and thank God for that.

See you in the bean aisle!