When bananas ruled the world

Intrigue. Power. Corruption. Death. Sex. The history of oil has nothing on that of the yellow fruit. 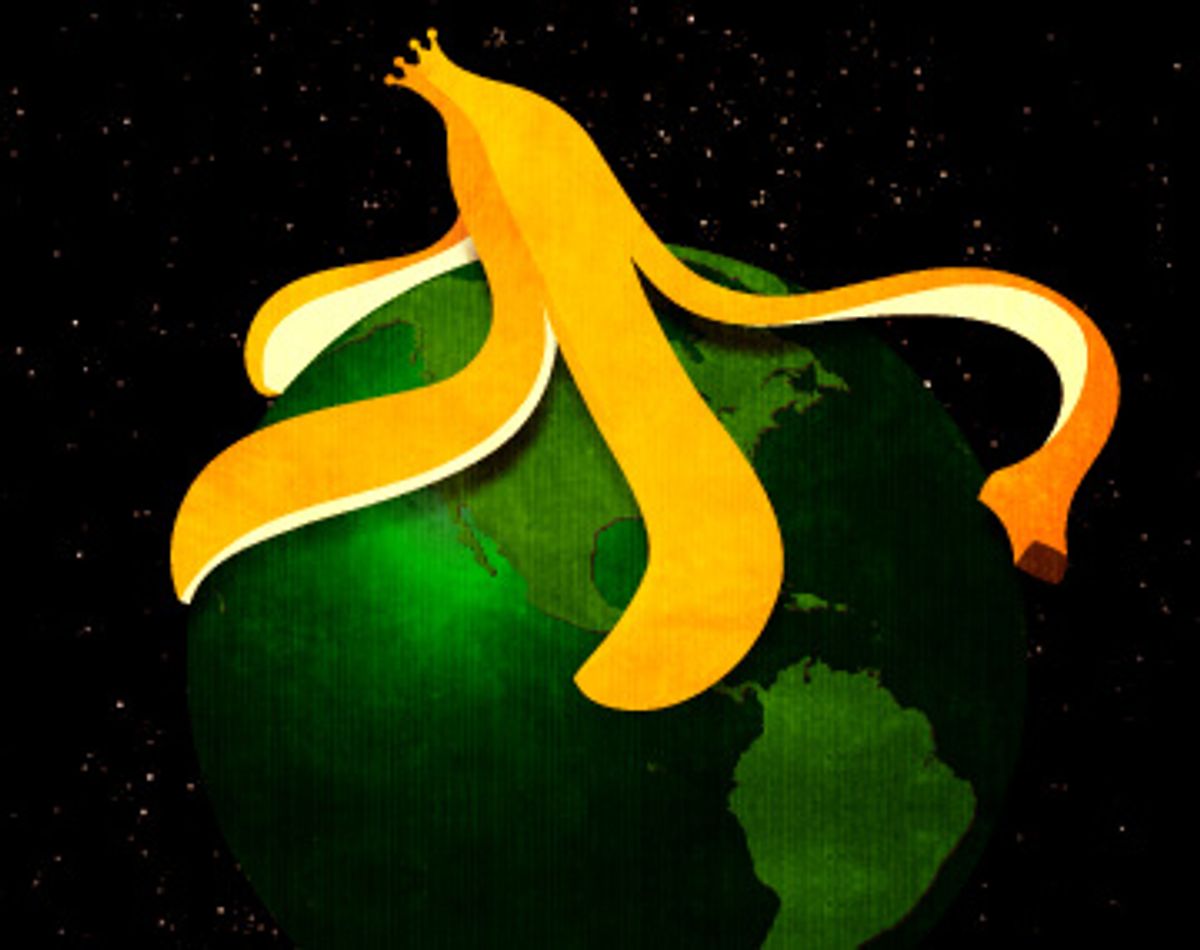 On a trip to Honduras, journalist Dan Koeppel caught the banana bug. Researching an article for Popular Science about attempts to breed a disease-resistant banana, the American journalist wandered the grounds of the old Chiquita compound, amid the fading colonial mansions and golf course, where he stumbled upon the cheery yellow fruit's unsavory past.

"I went out for drinks at the old country club, and this old-timer turns to me and goes, 'In this room, governments were overthrown.' It was like something out of a movie," Koeppel says.

Flipping through an old Chiquita guest book, Koeppel saw the scrawled names of United States senators, scientists, CIA agents and Honduran presidents. "Everybody was in there," he says. Browsing through the research facility's library, the journalist paged through a chipper recipe book featuring the Chiquita banana girl, who was shown topless, as she always was, giving instructions on how to prepare such delicacies as "banana coconut rolls." "I found these strange Chiquita cookbooks a hundred yards away from where massacres were planned," he says.

For generations, the banana has been embraced and celebrated in pop culture: "Yes, we have no bananas. We have no bananas today!" But it took muscle and outright carnage to turn this fragile tropical treat into the most popular fruit in the United States. The banana is "the yin and yang of American culture and blood," Koeppel says. The fruit became his obsession and the subject of his book, "Banana: The Fate of the Fruit That Changed the World."

Surprisingly, Koeppel isn't the only journalist of late to light out to the tropics and come back with tales of the banana's bloody role in history. For Peter Chapman, a Financial Times reporter, who spent years covering Latin America, the great banana company, United Fruit, which later became Chiquita, prefigured the rise of the modern multinational corporation. "It's interesting, isn't it, that something we would imagine as innocuous as bananas has produced as many exercises in regime change as has ever been enacted in the name of oil," says Chapman, whose book is called "Bananas: How the United Fruit Company Shaped the World."

The banana we eat today may be natural in the sense that it grows on a plant, but it's as much a mass-market product as a Big Mac, designed to be cheap, sweet and reliable. Yet the human affinity for bananas goes back 7,000 years, long before pesticides, refrigerated shipping, transportation networks and branding, like the Dole sticker on the peel of the supermarket variety.

"It shocked me to see that the history of this fruit goes hand in hand with the history of humanity," says Koeppel. "Wherever people went, the banana accompanied them." Some biblical scholars argue that the fruit Eve tasted in the Garden of Eden was not an apple, but the much more suggestively shaped banana.

The mass-produced banana first came to the United States in the 19th century. As the next century rolled on, buccaneering banana men pioneered such innovative business practices as propping up puppet heads of states throughout Latin America, keeping them in power through corporate largesse, and exploiting local workers, when not actually encouraging local governments to enslave or kill them. By building railroads, in exchange for land for plantations, United Fruit tightly entwined itself with the economies of many countries, and came to own huge swaths of Central America. Its reach was so extensive that it became known as "the Octopus."

When local leaders threatened taxes or complained about the company's abysmal labor practices, such as paying workers exclusively in company scrip to be spent only at the company store, United Fruit threatened to leave the country, taking its business next door. Mere bribes to local officials were strictly junior varsity in this jungle.

In some countries, United Fruit blatantly paid no taxes at all for decades. In others, when troubled by local officials, it simply installed a more sympathetic government. In Honduras in 1911, the banana men not only staged an invasion to depose the current regime and put in a new one, they had the audacity to demand the new government reimburse the costs incurred in the invasion!

United Fruit was not to be crossed. In Colombia in 1928, 32,000 banana workers went on strike, demanding such niceties as toilet facilities at plantations. In a massacre later immortalized in literature by Gabriel García Márquez in "One Hundred Years of Solitude," the military killed 1,000 unarmed striking workers and their families in the town square in Cienaga after Sunday church services.

The banana men, however, saw themselves not as ruthless corporate overlords but as a force for all that's good in civilization. In 1912, in Guatemala, while clearing the jungle for banana plantations, the company uncovered the Mayan ruins of Quiriguá, and paid for archaeologists to restore it, welcoming comparisons between the great lost civilization of the Mayans and the new one the company was building in the jungle.

"They thought they were bringing back the era of the Mayans, returning Central America from the savages back to its glory days of empire," says Koeppel. The company used that notion to buff its image at home and abroad. As Chapman explains, the companies "knew how to use such methods to ingratiate themselves into the minds of ordinary people, and come across appearing on the side of light and justice."

Today, when the business buzzword "corporate social responsibility" is so commonplace that it has its own acronym, CSR, it's sobering to remember that the banana czars themselves invented the term. "Now, we are expected to entrust our futures to the free market and better-behaved companies as a result of this new doctrine of 'corporate social responsibility,'" says Chapman. "But it does make you wonder, given the very inventor of the concept represented itself as a paragon of virtue, which didn't stop it from committing all manner of abuses."

It may seem hard to believe that the banana business could be as nefarious as the oil business. But to our banana chroniclers, it may have been worse. The banana men managed to be at once ferociously exploitative, while cultivating a beloved image with their customers, pioneering public relations and marketing practices still in use today.

"Nobody has ever loved the oil companies," says Koeppel. "Everyone has needed them, and they have a bloody history, but no one has ever said, 'Gee whiz! Those guys at Shell have such a cute little jingle.'" But when it comes to bananas, the 1944 Chiquita song is arguably the best-known jingle ever: "I'm Chiquita banana and I've come to say…"

But the banana men's mastery of spin didn't stop at catchy jingles. In the 1950s, President Jacobo Arbenz of Guatemala tried to force United Fruit to sell its fallow land back to the government. The president planned to redistribute it to landless peasants. To incensed banana leaders, this was an act of sovereign defiance.

One United Fruit P.R. man wrote a "report," which he sent to 800 influential conservative Americans, sounding the alarm about communism gaining a foothold in Latin America via Guatemala. The company employed no lesser force than the father of public relations himself, Edward Bernays. Promptly, Bernays flew journalists to Guatemala on luxury "fact-finding" missions, which resulted in dozens of articles published in Time, Newsweek, the San Francisco Chronicle and the New York Times, portraying the Guatemalan leader as a dangerous threat.

Bernays called the stories "masterpieces of objective reporting," and went so far as to suggest that somewhere behind the Iron Curtain, Russia was training revolutionaries to take over Latin America. In case anyone missed the point, United Fruit's P.R. team put out a movie titled, "Why the Kremlin Hates Bananas." It wasn't long before the Guatemalan president, who had dared to defy United Fruit, was ousted with the help of the CIA. He ended up stripped down to his underwear, paraded before the press in the airport, and sent into exile, never to return again.

Today's banana companies don't have anywhere near the power in Central America that they once did. That's in part because they don't have to. They've discovered the joy of outsourcing. After all, why deal with those pesky labor problems when you can have local producers assume all the inherent risks of growing an agricultural commodity?

What the banana men figured out, Chapman explains, is that "we don't have to own the land, we can give it to the local guy who wants to run his own plantation. We still have our railway, shipping line and sophisticated access to marketing. We don't have to be involved at the ground level with all the expense and aggravation, and all the headaches that go with it." Chiquita is now mostly a distribution and marketing concern.

But the legacy of their bad old days lives on. You can't blame United Fruit for everything that's wrong in Central American politics, says Chapman. Yet in many cases, by propping up weak governments, it helped create a power vacuum that's been filled by right-wing death squads and left-wing guerrillas. In Guatemala's decades-long civil war, more than 200,000 people have died. When some moderate leaders have advocated for a civilian government, they've been summarily executed. "I was with one such leader myself," says Chapman.

Even today, the taint of international scandal dogs the bananas in our supermarkets. In 2002, Human Rights Watch documented banana workers in Ecuador suffering "widespread human rights abuses," including use of child laborers as young as 8 years old, and workers being fired for trying to organize. In 2007, Chiquita was fined $25 million by the U.S. Department of Justice for making payments to "terrorist organizations" in Colombia.

Both books also peel back the environmental fallout of bananas. The authors suggest that the commonplace banana we eat today, a cultivar called the Cavendish, will likely become the next victim of the same Panama disease that drove its predecessor, the once ubiquitous Gros Michel cultivar, to commercial extinction.

The race is on to build a better banana that can stand up to Panama disease and shipping, ripen at the right rate once picked for the grocery store customer, and still be cheaper than that locally grown apple or pear. In a few decades, we could be eating cornflakes topped with an entirely different variety of banana, a notion that's certainly more comforting than the idea that we might have to give up this cheap, potassium-rich comfort food altogether.

In the meantime, the mass production of bananas for the world marketplace threatens the local varieties that millions of people around the globe depend on to keep starvation at bay. "It's a lot like AIDS, which is believed to have spread through Africa along newly built highways," says Koeppel. "As more and more commercial plantations are being built in Africa, the chances of cross-contamination increase. We are creating the possible disease vector."

Scientists are trying to create a more disease-resistant banana through cultivation and genetic engineering. But it's not easy. The banana, which is a giant berry plucked from the world's largest herb, is seedless, sexless and sterile. Because banana offspring are genetically identical to their parents, it makes them all the more vulnerable to disease.