On the road and off the radar, playing small-town Pennsylvania with the former president. 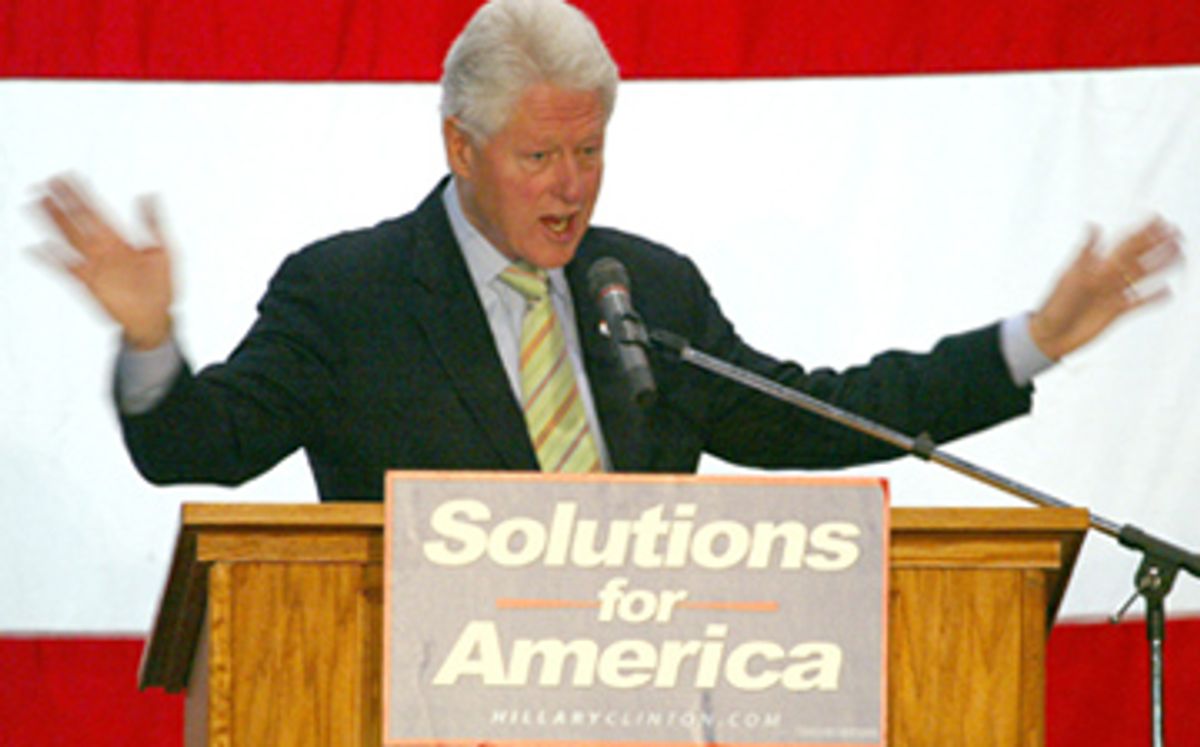 At 61, Bill Clinton -- even though he is a decade younger than John McCain -- makes more self-deprecating comments about age than anyone this side of Phyllis Diller.

At a wan rally at Wilkes University here Saturday morning, he squinted at a card listing local dignitaries and confessed, "You'll have to forgive me. I'm getting old. I can't read well this early in the morning." Burbling about building cars that could get 100 miles to the gallon at a Friday night town meeting in Fort Washington, just outside Philadelphia, Clinton remarked, "Whenever I say this about energy ... people start to look at me and say, 'You know, he's not as young as he used to be, but I actually think he's starting to lose it.'"

These out-to-pasture cracks are an easy way for Clinton to create an empathetic bond with his audience, especially in Pennsylvania, a state with the third highest median age in the nation. But watching Bill Clinton campaign for his wife on the eve of Tuesday's win-big-or-else Pennsylvania primary, it is easy to get the sense that the 42nd president worries that he has become yesterday's man. The crowds can be modest. Even the tricks of advance men, such as subdividing the Wilkes gym in half, could not hide the reality that only 300 people turned out for Bill Clinton in a place where Barack Obama recently played to a turn-away crowd. The underlying problem for Clinton is not his potential Denis Thatcher role if Hillary defies the odds and makes it to the White House, but rather that his political style and persona seem so anchored in the 1990s.

His Arkansas accent, which may be thicker than when he was governor, sets him apart in a political year in which it is difficult to hear any regional tinge in the words of Hillary (who long ago shed her suburban Chicago roots), Obama (whose boyhood homes were in Hawaii and Indonesia) and McCain (who grew up on naval bases). No candidate running dares attempt Bill Clinton's pile-on, bludgeon-you-into-submission style of political argument. As a rhetorician, Obama, in fact, is the anti-Clinton, since his artfully constructed speeches are in sharp contrast to the improvisational and-another-thing oratory of the former president.

When Clinton talks policy, which (no surprise) he does at length, his arguments always circle back to what may have been the signal accomplishment of his presidency -- defying the spendthrift history of the Democratic Party by bequeathing his successor a balanced budget. (What George W. Bush did with that legacy is a tragic tale best retold when small children have been removed from the room.) "This is underappreciated," Clinton said in Fort Washington, in what may have been a reference to himself as well as to fiscal restraint. "If you go to HillaryClinton.com, you will see how she pays for every program she advocates in this election because she really does believe that ... if we want to get these young people their economic future, we've got to provide for a balanced budget."

Ever since Bill Clinton's red-faced off-the-cuff comments in South Carolina and his refusal to let his wife abandon the state even in the face of an impending rout, the former president has turned into something of a stealth surrogate, often less visible to the national press than his daughter, Chelsea. In Pennsylvania, in particular, Clinton has been exiled to places like Moon Township, Connelsville and Somerset, part of his Friday can-you-find-it-on-the-map itinerary.

But there is far more of a coherent strategy here than simply enrolling Clinton in the Witness Protection Program. "You have to remember that Pennsylvania really only has six media markets – and you can't keep sending people to the same places every other day," said Nick Clemons, who is running Pennsylvania for the Clinton campaign. "So we're sending Bill Clinton to the kind of places which have never seen a president or a former president before. And it is making a difference."

Judging from news coverage, Clemons appears to be correct. The front page of Sunday's Times Leader in Wilkes-Barre was dominated by a photograph of the former president standing in front of a giant flag with the free-advertising banner headline: "CLINTON: AMERICA NEEDS YOU." The story also led the paper in the Sunday Voice in Wilkes-Barre with the head: "President Clinton says Pa. victory key for Hillary." Meanwhile, the Sunday Pocono Record in Stroudsburg announced on its front page (albeit below the fold): "Bill Clinton will make stop in Monroe today."

In the March 4 Ohio primary -- which, hard to believe, was along with Texas the last major contest -- Clinton rolled up a landslide 70-to-26 percent victory against Obama in the rural areas of the state, according to the exit polls. Replicating this kind of margin along the forgotten byways and in the played-out coal towns of Pennsylvania is central to Clinton's dream of carrying the state by the kind of 300,000-vote margin that might prompt uncommitted superdelegates to brood about Obama's prospects against John McCain.

The contours of Clinton's popular-vote strategy were outlined at an unusual house party for 70 upper-income Democrats (many of them undecided) Friday night in the Main Line Philadelphia suburb of Haverford. The up-with-Hillary speakers were the kind of all-star array that you might encounter at a top-dollar fundraiser: New Jersey Gov. Jon Corzine, director Rob Reiner and longtime Clinton advisor Ann Lewis. "It really comes down to the popular vote," Corzine said. "If you don't have the popular vote and you don't have the delegate vote, then I don't think you have a strong case [with the superdelegates]."

Because of Democratic Party rules mandating proportional representation, Clinton cannot statistically catch up to Obama's 164-delegate lead from the primaries and caucuses. But the popular vote -- contrary to expectations -- may be a different matter. In outlining the pro-Clinton math, Reiner began with the reality that most calculations put Obama more than 700,000 votes ahead. But that number excludes the results of the outlaw primaries in Michigan (where Obama's name was not even on the ballot) and Florida. Reiner, though, added in Clinton's tarnished Florida victory, reducing her overall deficit to 400,000 votes, using a little sleight-of-hand. "We can almost make that up here in Pennsylvania," he said. "Then if we do that well in Pennsylvania, we're going to wind up very well in Indiana, in Kentucky, in West Virginia. And by the time we get to Puerto Rico -- people don't understand that Puerto Rico has a lot of voters, 2 million voters. We can pick up 400,000-500,000 there with the popular vote."

You read that correctly: The June 1 primary in Puerto Rico -- whose residents, while U.S. citizens, cannot vote for president in November -- may loom large in the potentially vicious arguments over which candidate actually won the primaries. Clinton begins with a huge advantage there both because many Puerto Ricans have family ties to New York and because Obama, so far, has not run well among Hispanic voters.

The English-is-our-national-language crowd is already apt to become outraged when it realizes that Puerto Rico will elect more Democratic delegates than any of the five states (West Virginia, Oregon, Kentucky, Montana and South Dakota) on the calendar after Indiana and North Carolina vote on May 6. But the role of territories in nominating a president could spark a furor that goes far beyond such nativist arguments. Having battled about everything in this race -- aside, of course, from issues -- the Clinton and Obama campaigns may end up debating the cosmic meaning of the popular-vote numbers from the Puerto Rican primary.

But for any of these arguments to matter, Hillary Clinton has to first roll up heavy margins in places in Pennsylvania that Time, Newsweek and even Starbucks have forgotten. With pre-primary polls proving as accurate as divining rods, there is no way of knowing if Clinton can come close to winning Pennsylvania by a double-digit margin. But if the former first lady survives another Perils-of-Pauline primary, she may owe a bit of a debt to a former president named Clinton.