Affection for our planet is misdirected and unrequited. We need to focus on saving ourselves. 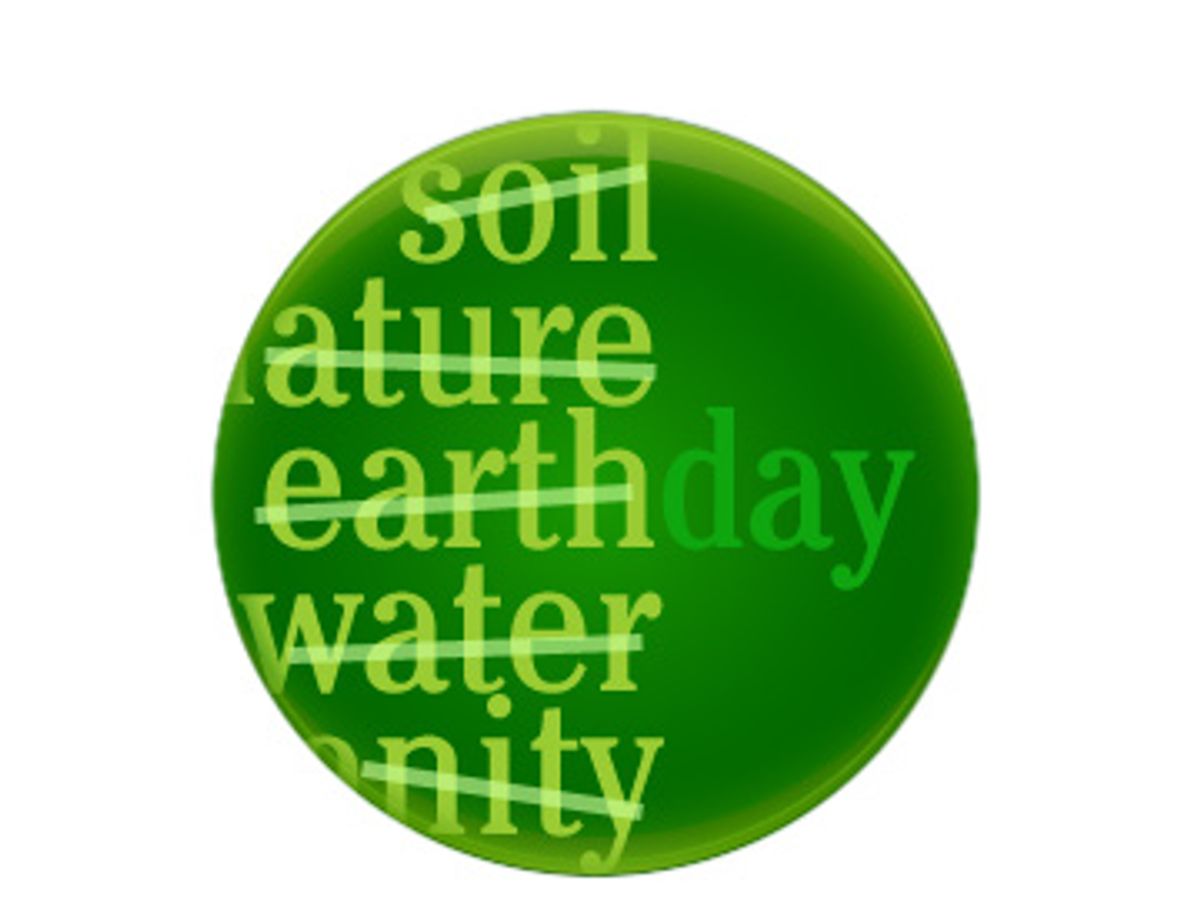 The earth is certainly not important enough to qualify for an ABC debate question. Who wears an Earth lapel pin? Arguably, concern over the earth is elitist, something people can afford to spend their time on when every other need is met. But elitism is out these days. Only bitter environmentalists cling to Earth Day. We need a new way to make people care about the nasty things we're doing with our cars and power plants. At the very least, we need a new name.

How about Nature Day or Environment Day? Personally, I am not an environmentalist. I don't think I'm ever going to see the Arctic National Wildlife Refuge. I wouldn't drill for oil there. But that's not out of concern for the caribou but for my daughter and the planet's next several billion people, who will need to see oil use cut sharply to avoid the worst of climate change.

I used to worry about the polar bear. But then some naturalists told me that once human-caused global warming has completely eliminated their feeding habitat -- the polar ice, probably by 2020 -- polar bears will just go about the business of coming inland and attacking humans and eating our food and maybe even us. That seems only fair, no?

I am a cat lover, but you can't really worry about them. Cats are survivors. Remember the movie "Alien"? For better or worse, cats have hitched their future to humans, and while we seem poised to wipe out half the species on the planet, cats will do just fine.

Apparently there are some plankton that thrive on an acidic environment, so it doesn't look like we're going to wipe out all life in the ocean, just most of it. Sure, losing Pacific salmon is going to be a bummer, but I eat Pacific salmon several times a week, so I don't see how I'm in a position to march on the nation's capital to protest their extinction. I won't eat farm-raised salmon, though, since my doctor says I get enough antibiotics from the tap water.

If thousands of inedible species can't adapt to our monomaniacal quest to return every last bit of fossil carbon back into the atmosphere, why should we care? Other species will do just fine, like kudzu, cactus, cockroaches, rats, scorpions, the bark beetle, Anopheles mosquitoes and the malaria parasites they harbor. Who are we to pick favorites?

I didn't hear any complaining after the dinosaurs and many other species were wiped out when an asteroid hit the earth and made room for mammals and, eventually, us. If God hadn't wanted us to dominate all living creatures on the earth, he wouldn't have sent that asteroid in the first place, and he wouldn't have turned the dead plants and animals into fossil carbon that could power our Industrial Revolution, destroy the climate, and ultimately kill more plants and animals.

And speaking of God, Creation Care is also woefully misnamed. If humans are special, invested with a soul by our Creator, along with the right to life, liberty and the pursuit of happiness, then why should we sacrifice even a minute of that pursuit worrying about the inferior species? Sounds to me more like paganism than monotheism.

All of these phrases create the misleading perception that the cause so many of us are fighting for -- sharp cuts in greenhouse gases -- is based on the desire to preserve something inhuman or abstract or far away. But I have to say that all the environmentalists I know -- and I tend to hang out with the climate crowd -- care about stopping global warming because of its impact on humans, even if they aren't so good at articulating that perspective. I'm with them.

The reason that many environmentalists fight to save the Arctic National Wildlife Refuge or the polar bears is not because they are sure that losing those things would cause the universe to become unhinged, but because they realize that humanity isn't smart enough to know which things are linchpins for the entire ecosystem and which are not. What is the straw that breaks the camel's back? The 100th species we wipe out? The 1,000th? For many, the safest and wisest thing to do is to try to avoid the risks entirely.

This is where I part company with many environmentalists. With 6.5 billion people going to 9 billion, much of the environment is unsavable. But if we warm significantly more than 2°C from pre-industrial levels -- and especially if we warm more than 3°C, as would be all but inevitable if we keep on our current emissions path for another decade or so -- then the environment and climate that made modern human civilization possible will be ruined, probably for hundreds of years. And that means misery for many if not most of the next 10 to 20 billion people to walk the planet.

So I think the world should be more into conserving the stuff that we can't live without. In that regard I am a conservative person. Unfortunately, Conservative Day would, I think, draw the wrong crowds.

The problem with Earth Day is it asks us to save too much ground. We need to focus. The two parts of the planet worth fighting to preserve are the soils and the glaciers.

A year ago, Science magazine published research that "predicted a permanent drought by 2050 throughout the Southwest" -- levels of soil aridity comparable to the 1930s Dust Bowl would stretch from Kansas to California. The Hadley Center, the U.K.'s official center for climate change research, found such desertification could cover one-third of the planet by 2100. Indeed, on our current emissions path, most of the South and Southwest ultimately experience twice as much loss of soil moisture as was seen during the Dust Bowl.

Also, locked away in the frozen soil of the tundra or permafrost is more carbon than the atmosphere contains today. On our current path, most of the top 10 feet of the permafrost will be lost this century -- so much for being "perma" -- and that amplifying carbon-cycle feedback will all but ensure that today's worst-case scenarios for global warming become the best-case scenarios. We must save the tundra. Perhaps it should be small "e" earth Day, which is to say, Soil Day. On the other hand, most of the public enthusiasm in the 1980s for saving the rain forests fizzled, and they are almost as important as the soil, so maybe not Soil Day.

As for glaciers, when they disappear, sea levels rise, perhaps as much as six inches a decade by century's end. If we warm 3°C from pre-industrial levels, we will return the planet to a time when sea levels were ultimately 80 feet higher. The first five feet of sea level rise, which many now believe could happen this century, would displace more than 100 million people. That would be the equivalent of 200 Katrinas. Since my brother lost his home in Katrina, I don't consider this to be an abstract issue.

Equally important, the inland glaciers provide fresh water sources for more than a billion people. But on our current path, they will be gone by century's end.

So where is everyone going to live? Hundreds of millions will flee the new deserts, but they can't go to the coasts; indeed, hundreds of millions of other people will be moving inland. But many of the world's great rivers will be drying up at the same time, forcing massive conflict among yet another group of hundreds of millions of people. The word rival, after all, comes from "people who share the same river." Sure, desalination is possible, but that's expensive and uses a lot of energy, which means we'll need even more carbon-free power.

Perhaps Earth Day should be Water Day, since the worst global warming impacts are going to be about water -- too much in some places, too little in other places, too acidified in the oceans for most life. But even soil and water are themselves only important because they sustain life. We could do Pro-Life Day, but that term is already taken, and again it would probably draw the wrong crowd.

We could call it Homo sapiens Day. Technically, we are the subspecies Homo sapiens sapiens. Isn't it great being the only species that gets to name all the species, so we can call ourselves "wise" twice! But given how we have been destroying the planet's livability, I think at the very least we should drop one of the sapiens. And, perhaps provisionally, we should put the other one in quotes, so we are Homo "sapiens," at least until we see whether we are smart enough to save ourselves from self-destruction.

What the day -- indeed, the whole year -- should be about is not creating misery upon misery for our children and their children and their children, and on and on for generations. Ultimately, stopping climate change is not about preserving the earth or creation but about preserving ourselves. Yes, we can't preserve ourselves if we don't preserve a livable climate, and we can't preserve a livable climate if we don't preserve the earth. But the focus needs to stay on the health and well-being of billions of humans because, ultimately, humans are the ones who will experience the most prolonged suffering. And if enough people come to see it that way, we have a chance of avoiding the worst.

We have fiddled like Nero for far too long to save the whole earth or all of its species. Now we need a World War II scale effort just to cut our losses and save what matters most. So let's call it Triage Day. And if worst comes to worst, at least future generations won't have to change the name again.