The epic battle for Pennsylvania

It seemed endless. It got nasty. (Babies were invoked, but so was bin Laden.) What will Tuesday's vote finally bring for the Democratic race? 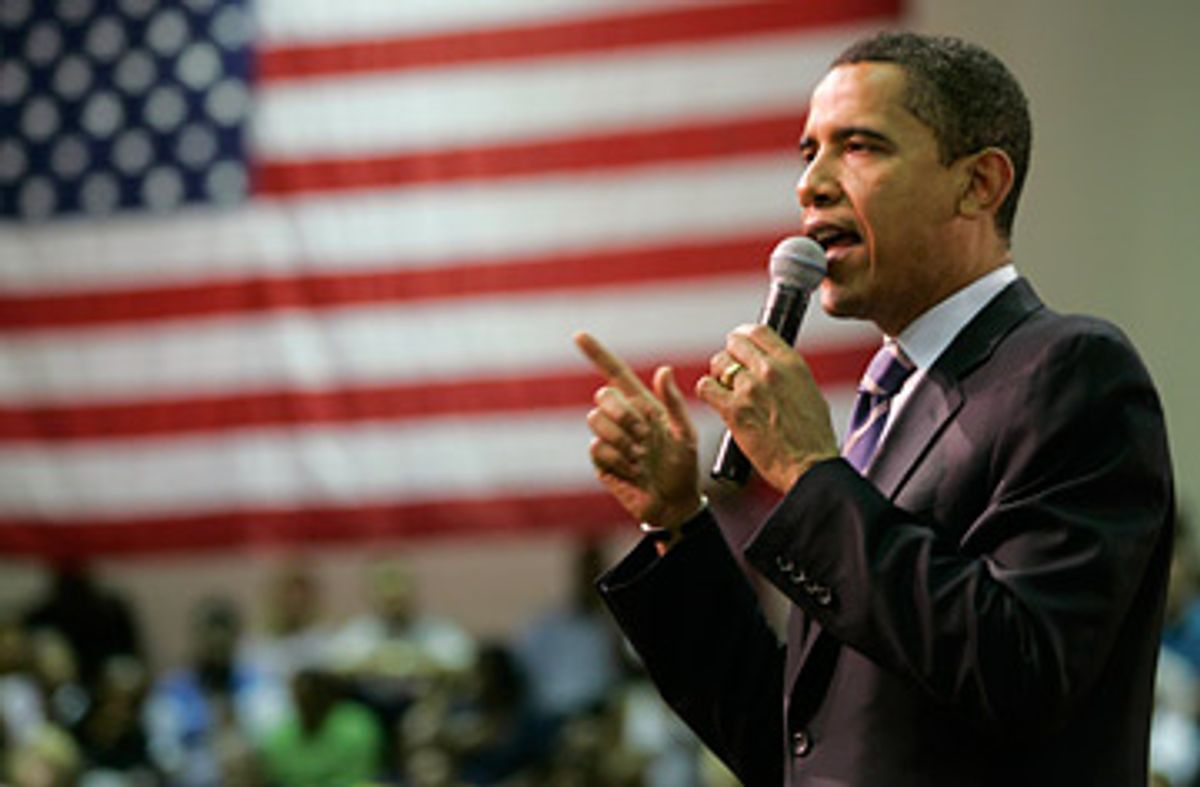 Barack Obama doesn't expect to win Pennsylvania's primary on Tuesday, but why let that get in the way of a few more huge rallies? After all, if things go the way he expects them to, he'll be back in the fall, courting the state's 21 electoral votes instead of its 188 Democratic delegates. The polls show Hillary Clinton maintaining the lead she's held in the state for months, but it was Obama and his supporters who seemed like they were ready to celebrate Monday night.

He walked into a rally here straight from taping a "Daily Show" interview full of easygoing jokes. "I am so sorry we're late," Obama told the few thousand people crammed into a stuffy, hot gym. Most of them had waited at least three hours by the time he showed up and started speaking. They didn't care. "O-ba-ma! O-ba-ma!" the room erupted when he walked in. The ovations kept coming throughout the speech as Obama promised, with a staple part of his stump speech, to change politics in Washington and end "business as usual."

Obama may have reason to party; even a Clinton win will leave her with one fewer state remaining to close a delegate gap that puts her, every day, under pressure to get out of the race. But the path to this point has certainly been strange. By now, you could be forgiven for thinking that Pennsylvania had already voted, maybe two or three times. The nearly two-month campaign here has been so full of dramatic twists that fizzled after a few days of breathless coverage on cable news, so caught up in minicrises for each side, that it now seems like its own universe, detached from the rest of the race for the Democratic nomination.

For all that, though, on the night before the election, not much had changed from when the candidates first landed here. Clinton still leads in most polls, by at least six or seven points. Obama is still struggling to win over the white working-class voters who make up the swing bloc in statewide elections here. Sandwiched between contests in two other large, industrial Rust Belt states (Ohio and Indiana), Pennsylvania's primary may stand out mostly because, after an exhausting battle with record levels of TV advertising and massive voter interest, the race here is likely to produce a result predictable back on March 5: Clinton wins, but Obama still leads the delegate count.

The main difference between the end of the Pennsylvania campaign and the beginning was how nasty it got along the way. Clinton's final ad features images of Pearl Harbor, the stock market crash, the 1970s oil embargo, Osama bin Laden and Hurricane Katrina. A voiceover says, "If you can't stand the heat, stay out of the kitchen. Who do you think has what it takes?"

Clinton aides declared in a conference call Monday that the commercial wasn't negative; it merely made the case that Hillary, not Obama, is most qualified to be president. Her campaign's phone calls to voters also accused Obama of lying about his position on gun rights.

Obama wasn't sticking to the high road, as he previously sought to do. "She is a hardworking public servant, but Senator Clinton does not understand the need to fundamentally change how Washington works," he said Monday night in McKeesport. "We can't have lobbyists and special interests setting the agenda in Washington." His campaign was running ads implying Clinton was using "fear and calculation to divide us" and making its own harsh phone calls to prospective supporters.

The snippiness has even carried down to voters. "I think he's bad for the country," Bobbie Frazer, a Clinton supporter from the Pittsburgh suburbs, told me following an afternoon rally in the city's downtown. Meanwhile, Obama fans had covered up Clinton signs in McKeesport with hand-painted ones of their own. "You know we got Republicans crossing over to vote for Hillary," one Obama supporter said after his speech ended, shaking her head.

Unlike Obama, Clinton skipped any mention of her rival's name at her own Pittsburgh rally. She hardly had time -- her 20-minute speech was crammed with bullet point after bullet point about her policy proposals. Clinton promised to rebuild American manufacturing, but with "green" jobs. She'd create special funds to help lower energy costs and to rebuild U.S. infrastructure, take on China over trade, end the war in Iraq (and win the one in Afghanistan) and restore the peace and prosperity of the 1990s. Her husband, warming the crowd up with a speech that was twice as long as hers, was a little more direct. "When somebody tells you to get out of the race, it's because they're afraid you won't," Bill Clinton said. "When somebody tells you you can't win, it's because they know you can."

Even with seven weeks to roam the state, neither candidate found time for a campaign stop in Punxsutawney, Pa., home of the nation's most famous meteorological rodent. They may have been wary of direct comparisons with Bill Murray's beleaguered weatherman, doomed to live the same day over and over again, but the comparisons were hard to avoid. For weeks, both Obama and Clinton have been getting more and more self-referential, as they've tried to escape the campaign's endless echo chamber. Obama's stump speech includes a line about how babies born when he declared his intention to run for president are now walking. Clinton refers often to "that 3 a.m. phone call," as if she was talking about something that had actually happened, instead of quoting one of her own ads. On Monday, even their sound systems seemed to be channeling each other's campaign, at rallies near Pittsburgh. First Clinton, then Obama, deployed "Only in America," a country tune by Brooks & Dunn filled with mildly jingoistic cliches (off the "Steers and Stripes" album, of course), to keep supporters entertained while they waited for the tardy candidates to show up to their events.

By Tuesday night, Obama and Clinton will finally have moved on from the Keystone State. Obama will head to Indiana (and a John Cougar Mellencamp concert-turned-political rally), while Clinton goes to Washington, D.C., after what is expected to be a victory party in Philadelphia.

The next six weeks will surely go by faster than the last seven. The primary elections will be over by then, in fact, with the final contests in Montana and South Dakota -- and perhaps even a conclusion to the Democratic primary race -- on June 3.