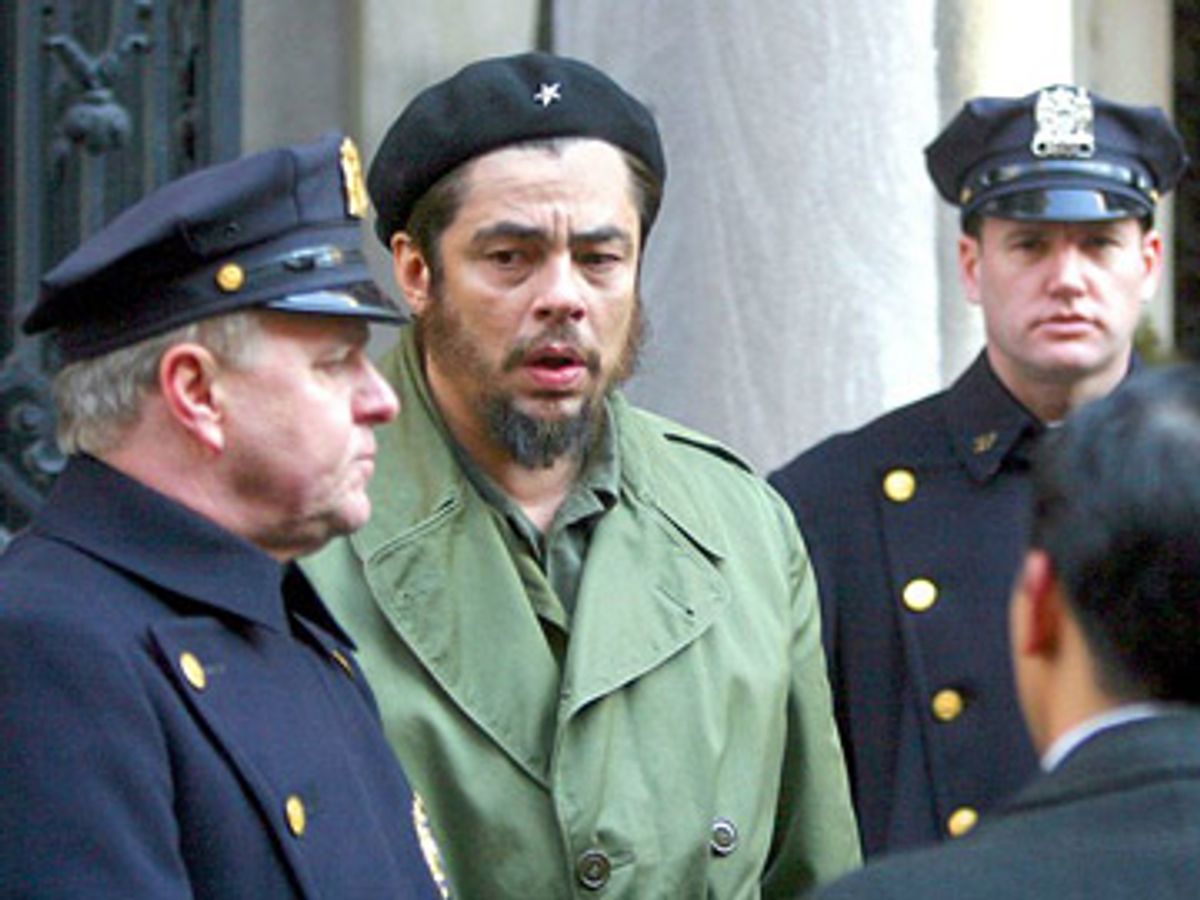 Clint Eastwood's latest thriller, "Changeling," and Steven Soderbergh's four-hour, two-part Che Guevara opus were among the surprise selections when the official lineup for the 61st Cannes Film Festival was announced at a Paris press conference on Wednesday. Both films will be in competition, as will "Synecdoche, New York," the directing debut of eccentric screenwriter Charlie Kaufman ("Being John Malkovich," "Adaptation," etc.).

As expected, Steven Spielberg's forthcoming blockbuster "Indiana Jones and the Kingdom of the Crystal Skull" will premiere out of competition at Cannes on May 18, four days before its worldwide release. The festival's opening and closing films were not announced today; speculation continues to focus on Michael Patrick King's "Sex and the City: The Movie" for the former slot and Barry Levinson's "What Just Happened?" for the much less desirable closing-night gig. In a minor surprise, Woody Allen's new film "Vicky Cristina Barcelona" will premiere out of competition at Cannes, despite published reports that Allen was financially obligated to open the film at the festival in San Sebastián, Spain, later this year.

On the other hand, "City of God" director Fernando Meirelles' English-language "Blindness," based on Nobel laureate José Saramago's novel and starring Julianne Moore and Mark Ruffalo, was long expected to debut at Cannes but was not mentioned today. (It could well be added later, and is a plausible opening-night choice if programmers decide to pass on "Sex and the City.") While that was the most startling omission, rumored entries from Iran's Abbas Kiarostami, Greek director Theo Angelopoulos, Argentina's Lisandro Alonso and Poland's Jerzy Skolimowski apparently were either rejected or aren't ready.

Eastwood's "Changeling," a dark 1920s period piece based on a real-life Los Angeles kidnapping case and written by "Babylon 5" creator J. Michael Straczynski, stars Angelina Jolie and John Malkovich. It was never rumored as a strong possibility for Cannes, probably because it's not expected to open in the United States until October or later. As recently as last week, it was reported that Soderbergh felt his double bill of films starring Benicio del Toro as Guevara, the legendary 1960s Marxist guerrilla, was not yet ready for public exhibition. Now he's got three weeks to finish it. (Soderbergh's two films, "The Argentine" and "Guerrilla," will open and screen separately in most venues, but will be shown in Cannes as a single entry entitled "Che.")

Beyond those expected and unexpected choices, the 2008 Cannes competition will be light in American-made films and rich with big names in international art cinema, largely directors who remain unknown in the U.S. beyond a modest coterie of admirers. Belgian brothers Jean-Pierre and Luc Dardenne, twice winners of the Palme d'Or at Cannes (for "Rosetta" in 1999 and "L'Enfant" in 2005), return with "The Silence of Lorna." French director Arnaud Desplechin, whose 2004 "Kings and Queen" might be this decade's most acclaimed European film, will premiere his new "Un conte de Noël" ("A Christmas Story"), with a cast of Gallic stars that includes Catherine Deneuve, Emmanuelle Devos, Mathieu Amalric, Chiara Mastroianni and Melvil Poupaud. (In most cases these European films don't have official English titles yet; my translations are approximate.)

Philippe Garrel, a legendary figure in the French artistic underground who is only now gaining an international following after almost 40 years of filmmaking, will premiere "La frontière de l'aube" ("The Edge of Dawn"), which stars his son, actor Louis Garrel. German director Wim Wenders returns to Cannes with "The Palermo Shooting," starring Dennis Hopper and Milla Jovovich, along with Patti Smith and Lou Reed playing themselves. Canada's Atom Egoyan ("Ararat," "The Sweet Hereafter") is back with "Adoration," acclaimed Turkish director Nuri Bilge Ceylan ("Climates") returns with "Three Monkeys" and hotshot Chinese filmmaker Jia Zhangke will premiere his new "24 City."

Of the 52 features named to all sections of the official selection today -- with a few more likely to follow -- just seven were directed or co-directed by women. Nine appear to be American movies and roughly 20 are European. (On first glance, it appears that just one is British, which will not be welcome news in a United Kingdom film industry already hard-hit by recession.) I also count eight Asian films, five from Latin America and two or three from the Arab world.