The PBS documentary series "Carrier" discovers conflict and camaraderie among the (shockingly young) inhabitants of the USS Nimitz. 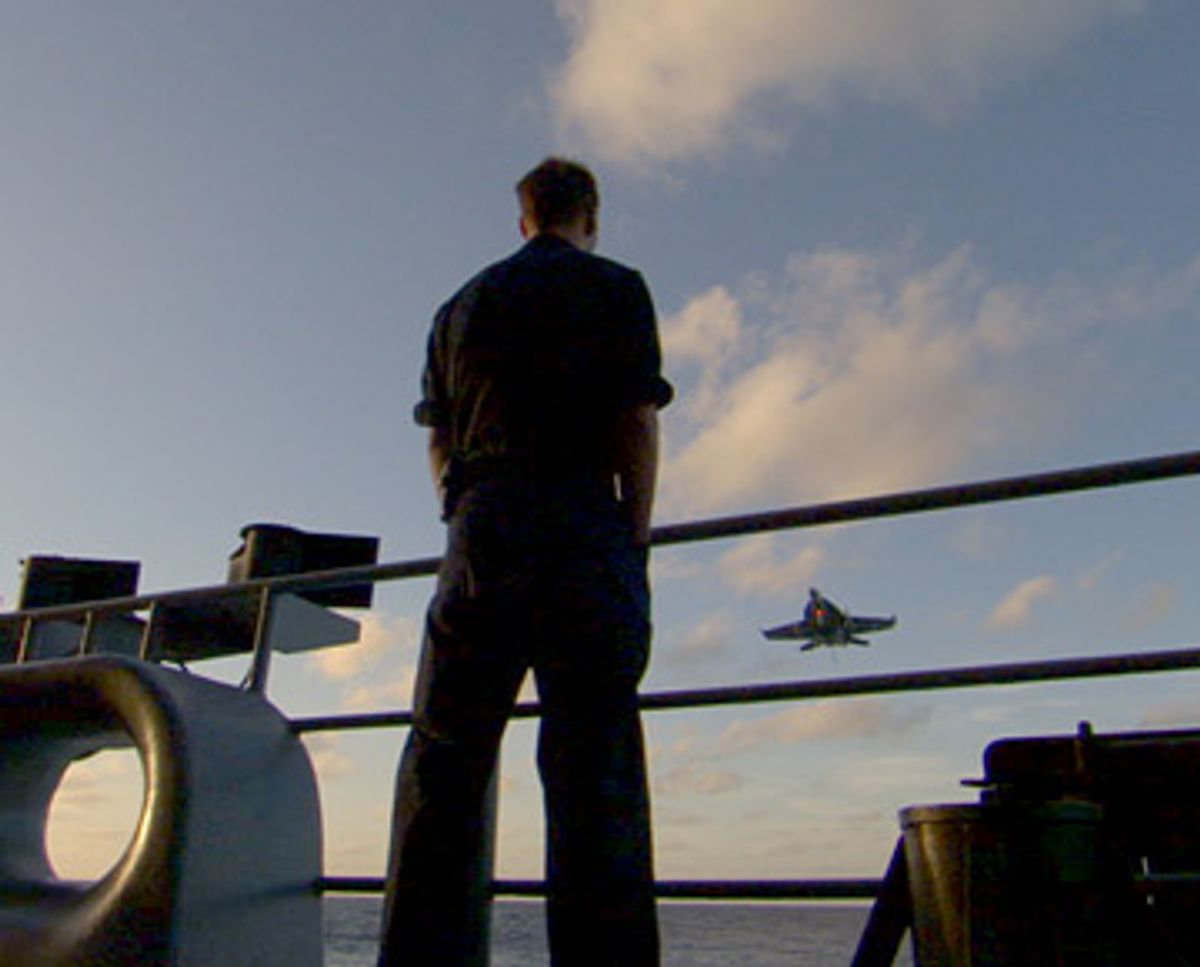 Imagine a floating city, cramped and volatile, powered by two nuclear reactors, populated by 5,000 working people with the average age of 19 who do tedious, grueling, dangerous jobs around the clock.

No, this isn't a science-fiction novel; it's the USS Nimitz, an aircraft carrier in America's fleet that's the subject of PBS documentary series "Carrier" (premieres at 9 p.m. EDT Sunday, April 27, on PBS, check listings). Although the ship's residents are packed into the equivalent of a 23-story building on its side, the experience of the sailors on board varies wildly based on their ranks and jobs. "Our blood runs about a thousand miles an hour," says a chief petty officer on the flight deck, and one pilot loves his job so much he says, "You can consider me a spoiled brat." But an enlisted sailor describes life on the ship as "probably the closest thing that a person who is not in prison will ever get to being in prison." With a careful mix of respect, curiosity and humor, the filmmakers offer a colorful and surprisingly nuanced tour of the day-to-day operations of the USS Nimitz during a six-month deployment in 2005, from California to Hong Kong, Guam, Bahrain and Perth, Australia.

The filmmakers indulge our awe at the brute strength and complexity of this floating war machine, but they also address the justified skepticism at the enormous cost of keeping it afloat while documenting the inherent volatility of life on board. The first two hourlong episodes of the series, though, often linger in the shock-and-awe territory. As we're treated to footage of fighter jets taking off to the strains of heart-wrenching alterna-pop ballads by Five for Fighting, it's easy to suspect that this is the work of a hopelessly romantic neocon with a taste for "Highway to the Danger Zone!" "Top Gun"-style montages.

The bravado of the pilots and officers on board only deepens this impression. "As we joke, [the aircraft carrier is] four and a half acres of sovereign U.S. territory that can park itself anywhere in the world," offers Cmdr. David Fravor. "It is a huge tool for the president. It will always cause someone doubt if they're going to do something, because we're dead serious about what we do." With so much swagger on hand, it's tough not to think of that infamous and ill-considered "Mission Accomplished!" banner that waved off the USS Abraham Lincoln in the early days of what now feels like an interminable war in Iraq.

Even so, the filmmakers aren't shy about exposing troubling aspects of the ship's operations. Those unfamiliar with dumping at sea will be shocked at the carrier's trash-release policies: Everything but plastic gets bundled in enormous brown sacks and cast into the ocean. "You'll find that when compared to the civilian cruise liner industry, we are far more environmentally friendly than those types of ships," Capt. Ted Branch tells the camera. And an unidentified sailor who works in the trash room explains, "We don't dump anything that could contaminate the water, everything we dump is like regular cans or food that we don't eat." No matter what they say, though, watching massive bags of crushed aluminum cans sliding into the waves will make your heart sink.

While the ugly underbelly of military life seems to be missing from the first two, somewhat macho episodes, by the third and fourth hours, sexual assault and racism in the ranks are addressed through some shocking examples. In one disturbing sequence, we're introduced to Bob Patrick, an aviation ordinance petty officer who works on the flight deck, manages 30 people, and has been honored several times for professionalism and initiative. Patrick counsels fellow sailors on how to avoid trouble, drinking and unwanted sexually transmitted diseases as part of the ship's Sexual Assault Victims Intervention (SAVI) program. "He's got the potential of being a great officer and a great leader," a higher-up says of him.

A few scenes later, that portrait changes dramatically. Patrick explains to the camera that he's on restriction after having sex with a lower-ranking female airman. The woman tells the camera that she told everyone the encounter was consensual because she knew that calling it rape would end Patrick's career in the Navy. But she says she was very drunk and "wasn't sure" whether she'd really consented to it or not. She appears shocked that a man she once looked up to and considered "an awesome guy" would take advantage of her. Although the sexual encounter was classified as consensual, both the woman and Patrick are put on restriction, and Patrick won't be eligible for promotion for five years. The captain says, "Most likely his long-term viability for promotion is done." Ironically, Patrick was on SAVI duty that night, on call to counsel victims of sexual assault.

In the next hour of the series, Robert Allen, an enlisted airman, looks right at the camera and announces that he's a racist. Still, we see him joking around with fellow enlistees who are Filipino, Latino and African-American. In Guam, Allen gets fall-down drunk and informs a black fellow sailor that he's a racist. Instead of beating his face in on the spot, the sailor looks him in the eye and says, "The Navy is a melting pot … If you adapt yourself to be around different cultures, if you learn about different people and what they experience in their life, then that will change you overall. If you can teach your children not to be the same way you were raised, then we can make a difference." Allen nods in agreement. It's a memorable moment, but don't cue the chorus of violins just yet: Later, Allen is looking at photos of the night and says, "What the f***? What was I doing talking to this guy? What's he doing hugging me?"

The filmmakers document these events and others with admirable restraint, allowing viewers to draw their own conclusions. Such disturbing episodes, when paired with footage of those fighter jets racing through blue skies while their pilots talk about how anxious they are to drop some bombs, might make the U.S. military look like a demonic force in the world, but the filmmakers are careful to include dissenting opinions among the ranks. Based on footage from the first six episodes, minority enlistees on board seem to be a little more skeptical about the point of the war than their higher-ranking white counterparts. Airman Shaneeka McReed says, "I don't get why we're fighting for somebody else's freedom when we barely have our own."

Lt. Doug Booher seems to be one of the only pilots who has major doubts about the war. He says he understands waging war in Afghanistan and of course he's going to do his job, but as far as Iraq goes, "I think we're fighting a war that may be more futile than we recognize." Later, his commanding officer refers to him as "a blue guy."

Even with such an incredible range of personalities and views on parade under such combustible circumstances, the filmmakers stay focused on the humanity of all of the ship's residents, from the lowliest enlistee to the captain. The soaring fighter jets put on a good show, but the charms and quirks of the working people on board are what make "Carrier" addictive. Most of them are just teenagers who needed to get out of bad situations at home. Some mention the limited opportunities of their small towns, or say that they joined the Navy to escape broken homes, alcoholic parents or siblings struggling with drug addiction. The most heartbreaking of all may be Randy Brock, a Marine whose parents abandoned him at a carnival when he was 3 years old. "The things my sister and I had gone through, the abuse, the things said, the things done ... I wouldn't wish them on anybody," he tells the camera. "I would hate to see where I would be if I didn't join the Marine Corps ... I had nowhere to go." Although disillusioned pilot Lt. Booher leaves the Navy for good halfway through the Nimitz's deployment, it's tough to picture a guy like Brock ever leaving the military. The Marines are like the family he never had.

And it's not hard to see why. For all of the strife and the challenges, the camaraderie on the ship is unmistakable: Fighter pilots refer to each other by their affectionate (but insulting) call names, airmen high-five on the flight deck, then joke around and dance to music on a break. When the big talk of democracy-building is over, these are just kids thousands of miles away from home, forming a family out of strangers with utterly different backgrounds, trying to keep their heads straight and do their jobs and serve their country, right or wrong.