Will the Democrats flop in Denver?

If they arrive at the convention still divided over their star, they risk being upstaged by John McCain. 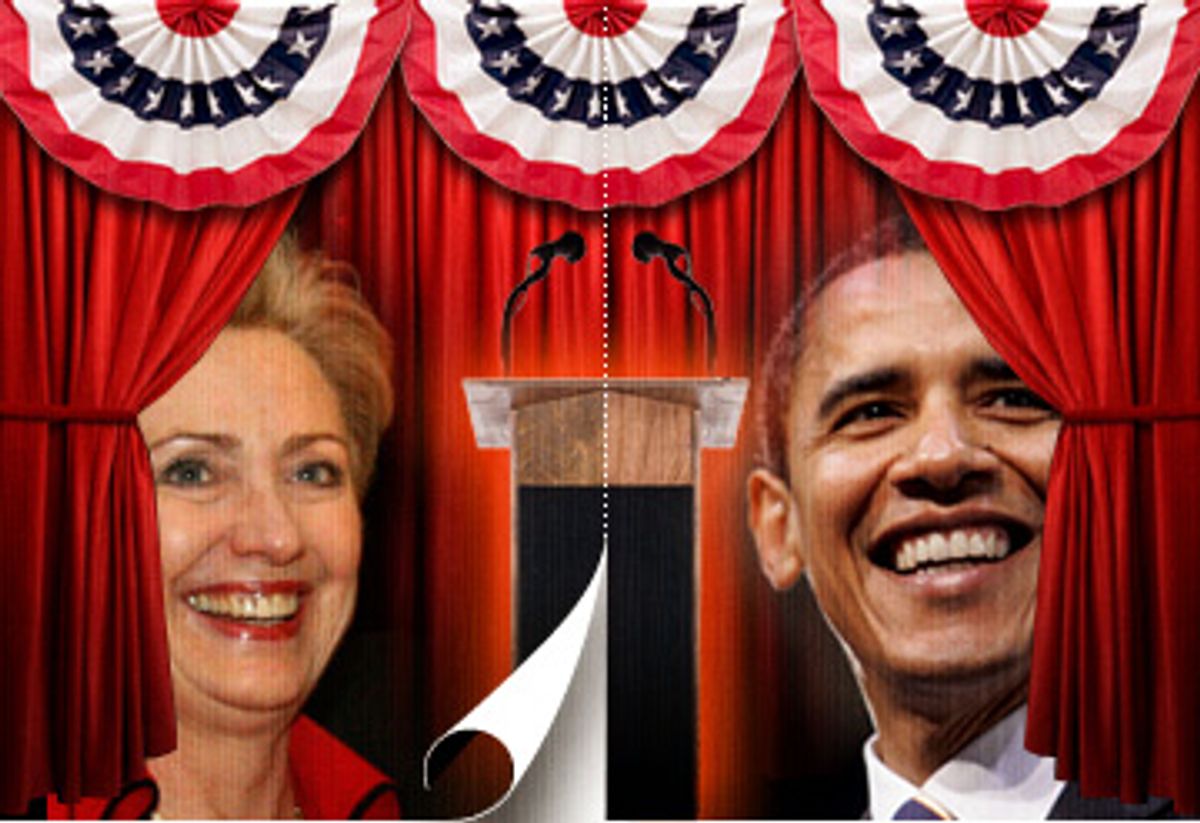 Four years ago, the most fraught decision for most delegates to the 2004 Democratic convention was which Boston bar to head to immediately after the proceedings adjourned each night. John Kerry had picked his running mate weeks before, the platform had been agreed upon well in advance and the choreographed details of the convention were all fully planned, right down to exactly when everyone in the arena would hold up their color-coordinated signs.

This year, the situation could require heavy drinking of an altogether different kind. It's still not likely, but Hillary Clinton's win in Pennsylvania kept alive the prospect of a deadlocked race heading all the way to the convention in Denver in August. Party officials want undecided superdelegates to make a choice between Barack Obama and Clinton by late June, after the final primaries and caucuses are over. But if enough of them resist, denying either candidate a working majority heading into the convention, a crisis could loom, with implications for the battle against Republican John McCain. That threat is forcing Democratic officials to get more serious about developing contingency plans for Denver.

The problem that could confront Democrats isn't so much how the convention eventually picks the nominee -- the days of brokered conventions, with party bosses choosing the winners in smoke-filled rooms, are over. (For one thing, as several Democratic leaders told the Wall Street Journal recently, those party bosses don't really exist anymore.) Any climactic last-stage fight would play out in public, either at the convention itself or in the committees that determine the platform and the rules just beforehand. The real issue therefore is in some ways more mundane, a matter of mechanics: Who runs the show if the nominee isn't picked ahead of time, and exactly what kind of show would it be?

But in an age of hyper political coverage, in which the conventions are seen as a key strategic moment for the parties to present their candidates to the broader national electorate, leaving those questions unanswered until the last minute is an unsettling prospect for party leaders.

"It's the only time, once every four years, that the Democratic Party physically gets together in one place," said Tad Devine, a Democratic strategist who's been neutral this year, after helping run Kerry's campaign in 2004 and Al Gore's in 2000. "You take all of these political people and then you put them literally under one roof, and you invite 15,000 members of the press to come watch ... It's potentially a very chaotic situation."

If Clinton makes good on her pledge to keep fighting on until August, the delegates in Denver might actually have real votes to make (as opposed to the ceremonial but predetermined outcome that normally unfolds). Democratic officials, although they say they're not worried about it now, would have to figure out how to shape and manage a message for a convention in which no one knows for sure who will be standing under all the balloons at the end.

There is still a good chance that such a crisis will be averted. By the time South Dakota and Montana Democrats have their say on June 3, Obama will almost certainly still have a lead in pledged delegates, as well as a narrow edge in the popular vote (especially without Florida and Michigan's contested results). If Democratic National Committee chairman Howard Dean has his way, any superdelegates who haven't come out publicly for one of the two of them would get around to doing it not long after that date, and either Obama or Clinton would finally have a solid claim to being the presumptive nominee. Both publicly and privately, top Democrats and their aides say they adamantly don't want the gathering in Denver to decide the winner. "It's in no one's best interests for this thing to go to the convention," said one Democratic operative, whose boss, a senior Senate Democrat, has remained neutral in the race.

Still, Clinton's victory in Pennsylvania gave her new resolve to keep running. A hotly contested convention may not be likely, "but it's a lot more likely today than it was two days ago," said Devine, though he argued recently that superdelegates will probably go for whoever is leading in the delegate count once the primaries end.

Banking on the whims of the superdelegates -- who aren't required to stick with the candidate they say they'll endorse -- could leave the party scrambling for a Plan B very late in the game. Clinton's campaign has predicted a summer-long battle to convince superdelegates to back her, which would drag the process out longer than previously imagined by most. So organizers in Denver are busy preparing backup plans for a nightmare scenario in which two potential nominees need to be accommodated -- with everything from the best hotel suites to the choicest Pepsi Center skyboxes split between the Obama and Clinton camps.

Informally, both campaigns are being kept in the loop as decisions get made about some convention details that will remain constant either way. No matter who wins, for example, expect to hear a lot about Democratic strength in the West, with governors like Arizona's Janet Napolitano and New Mexico's Bill Richardson taking prominent roles, regardless of the fact that both are backing Obama.

"We fully expect to have a nominee before anyone arrives in Denver," said convention spokeswoman Natalie Wyeth. "With that said, we would not be doing our jobs when you're planning an event of this scope and size if we did not plan for or build in added flexibility."

Ideally, planners want to be able to hand over a "turn-key" convention scheme to whoever winds up as the nominee. The idea is that everything but the content of the convention script will be developed in advance -- and then the nominee's staff would fit their own broad themes around that framework. Each night will already be divvied up into time slots for speeches, before the winner's aides need to figure out who will say what.

But that may all seem a little too easy. Modern conventions are carefully stage-managed affairs, with nothing left to chance; it is the prime opportunity for nominees to make a case to American voters who are tuning in to politics for the first sustained length of time. For example, in 2004, working nearly around the clock in a room in the Fleet Center basement, a team of speechwriters hired by the Kerry campaign vetted the text of everything anyone said from the podium at the Boston convention.

If the winner isn't clear ahead of time this year, Dean and the DNC would take over that critical management role -- meaning whoever wins won't have much input into the overall theme of the convention that nominates them.

John McCain's Republican convention in St. Paul, Minn., will almost certainly focus heavily on his military service, national security credentials and "maverick" image. Given the country's opposition to the war in Iraq and the growing economic turmoil, McCain's strategists want the election to hinge on character. If Democrats show up in Denver with a boilerplate plan -- missing the chance to really hone a message about their nominee's qualifications because they are still battling each other -- McCain's task may well get easier.

Aides to Clinton and Obama say neither campaign has begun planning for how to deal with a competitive convention yet. Before her win in Pennsylvania this week, Clinton's team had mostly been strategizing one day at a time, aides said. And Obama's team remains convinced that they'll win over enough superdelegates in plenty of time to take command in Denver. But a campaign that people once thought would end in January has now been extended at least until May. If it goes much past then, August could take the party into uncharted, and perhaps perilous, strategic territory.