Obama needs to come down from his front-runner's pedestal and fight for working-class voters. Plus: Did Keith Olbermann really say that? 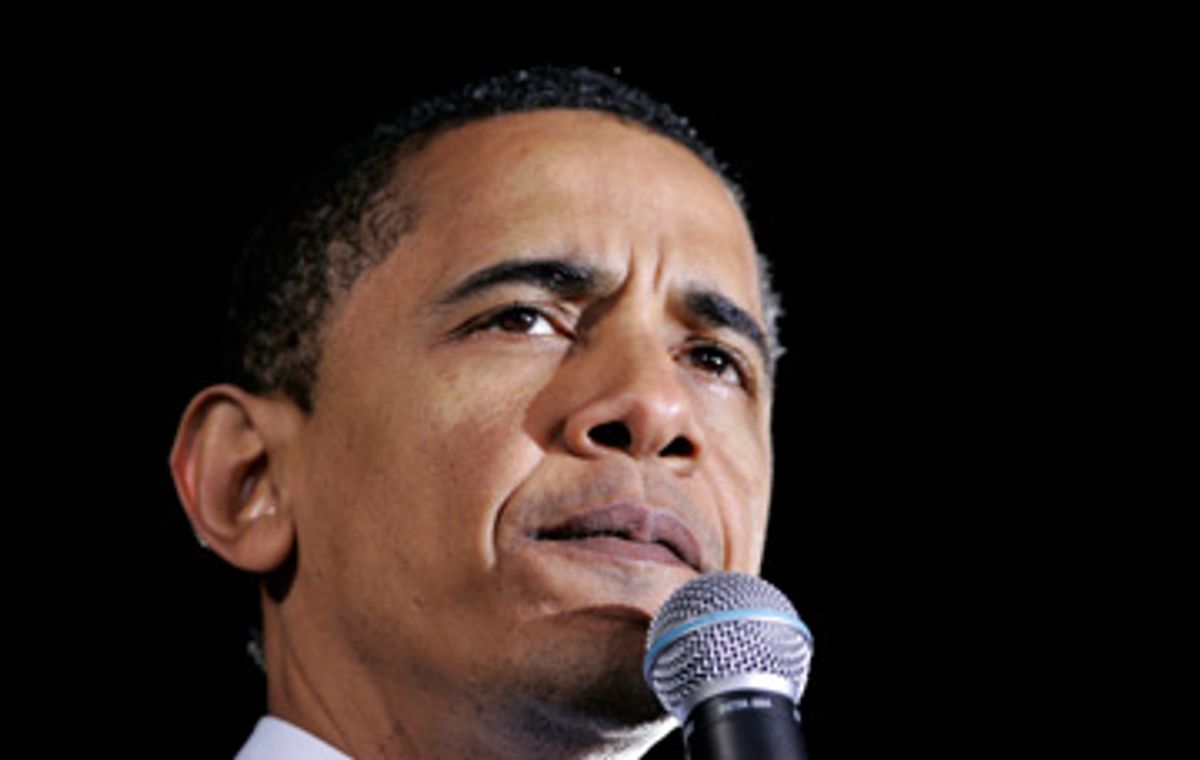 As I continue to think about the lessons of the Pennsylvania primary, and their relevance to the races ahead, I found myself thinking about the hours I spent last Saturday watching CNN's "Ballot Bowl" -- long live clips of John McCain, Barack Obama and Hillary Clinton out on the campaign trail, rarely mediated by cable chatterers. I was also reading angry letters about my post on the ABC debate and recovering from three college visits in a week with my daughter. I share that TMI because the context was important. I was tired and a little bit cranky (I know, that makes me Clinton's demographic!), but I had an epiphany about the race between Clinton and Obama that stayed with me.

I was multitasking and not paying that much attention to the TV in the background, but Clinton is just a campaign jackhammer, shattering your resistance with detail. I tried to tune her out, but I found myself listening to her long lists of what she'd do to solve the healthcare crisis, the mortgage crisis, the college education affordability crisis. And suddenly, hey! She's talking to me! She told me she'd do away with FAFSA, the Free Application for Federal Student Aid! Everyone hates FAFSA! She doesn't want me to take money out of my house to pay for college, either. I felt like I was watching Suze Orman (another one of my guilty zone-out TV pleasures). Clinton said she would solve problems I didn't even know I had.

Then I watched Obama. I love listening to Obama. Once again, I really got his theory of change: His campaign is not about cobbling together a laundry list of policy-wonk solutions and then trying to squeak them through Congress; it's about thoroughly changing the terms and conditions of our political debate. His dream coalition includes decent Republicans and independents, along with young people, African-Americans and lots of new voters who've been turned off by the polarization of the Clinton-Bush years. His speeches are heavily about process, and they're inspiring. If you think our process is corrupt and broken, he's your man. If you're either fine with the process or too busy to think about it (filling out your FAFSA, trying to save your house from foreclosure, breaking up your kids' latest fight), he might lose you.

There are a lot of reasons Obama lost Pennsylvania, but I think that gulf between their approach to speeches last weekend is an important one. I'm not trying to dismiss or stereotype Obama as elitist, out of touch, or Snob-ama, as Michelle Malkin calls him. He is the son of a single mother; he had the kind of upbringing that makes people empathic; he did work for real as a community organizer in Chicago. But very little of that is palpable in his speeches. And while his aspirational change appeal worked to get voters' attention early in the campaign -- all that terrific hope-mongering, the uplifting themes that inspired precisely because they weren't bogged down in detail, unlike a Hillary Clinton speech -- well, it isn't working as effectively now. Sure, Clinton's "solve every problem" shtick can seem like pandering -- trust me, she is not going to get rid of FAFSA! -- but it can also seem reassuring.

Whether you like her or not, it's hard not to concede that Clinton's second act, in which she (belatedly) discarded Mark Penn's incumbent costume and put on her Harry Truman outfit, is working better. Obama might need to find a new script too. There's always the temptation for the front-runner to play it safe, to try to win by not losing. And that has been Obama's game plan of late. He seems a little exasperated that he has to keep fighting for this. I understand his frustration and his exhaustion. But the fact is, he hasn't won, and so he has to keep fighting to win.

I was also struck last weekend by how Obama was still referring to the nasty ABC debate in his speeches, as I was reading Salon letters that overwhelmingly disagreed with my take on the debate. I think Obama, his campaign and many of his supporters in letters believe fighting back against ABC was great politics. But I'm not so sure. A lot of my liberal journalist friends got so fired up about the ABC debate questions, they sent a letter of protest to ABC news. (Nobody asked me to sign it, but then, they probably thought they already had too many women.) Once again, I think Obama's media fans hurt him rather than helped him. I understand that he, and they, think that if they can shame ABC, and others, out of asking gossipy, "gotcha" questions in debates, that helps all Democrats. Again, he, and his devoted supporters, want to transform politics, not merely win. But I think that's an awfully tall order for one campaign.

Even worse, in the week after the ABC debate, Obama mostly dodged reporters. He had that awful sound bite, "Can't I just eat my waffle?" when one writer approached him, and then he shut down plans for a North Carolina debate. He looks like he's ducking tough questions. He's got to start looking like a fighter, and really, when you think about it, he has nothing to lose. He almost certainly can't lose his pledged-delegate or popular-vote edge in the remaining handful of primaries. I personally think he should debate Clinton again, and hammer her on things that really matter, like her disturbing promise, repeated several times now, to retaliate against Iran if it attacked Israel with nuclear weapons. Why not stack up his college-funding plans against hers? Debate who can really bring down the price of gasoline. (Clinton joined John McCain this week in pandering by promising a gas tax holiday, though hers would be combined with a windfall-profits tax.) And so on.

I'm aware that my worries about Obama's campaign to date make me seem like a Clinton voter -- old and fearful, unable to believe in the newcomer's revolutionary appeal. I'd love to be proved wrong. But now that Obama has shown us the audacity of hope, a significant subset of Democrats needs more: They want him to have the courage to propose real-life solutions, and to face down attacks to make them reality. I have to say, I loved this letter. I don't expect Obama to read me, but he should read that.

Update: Did MSNBC's Keith Olbermann really say that? He and "Countdown" stalwart Howard Fineman were reprising their regular conversation about the perfidy of the Clinton campaign Wednesday night when Fineman bemoaned the lack of Democratic leaders (he called that an oxymoron) who could tell Clinton the race was over. Olbermann did him one better, insisting that ending Clinton's campaign requires finding a strong Democratic leader "who can take her into a room, and only he comes out." I know and like and have worked with Keith Olbermann, but that just sounded ... wrong.