This good-natured sequel might not be as endearing as the original, but it's still much more than another stoner comedy. 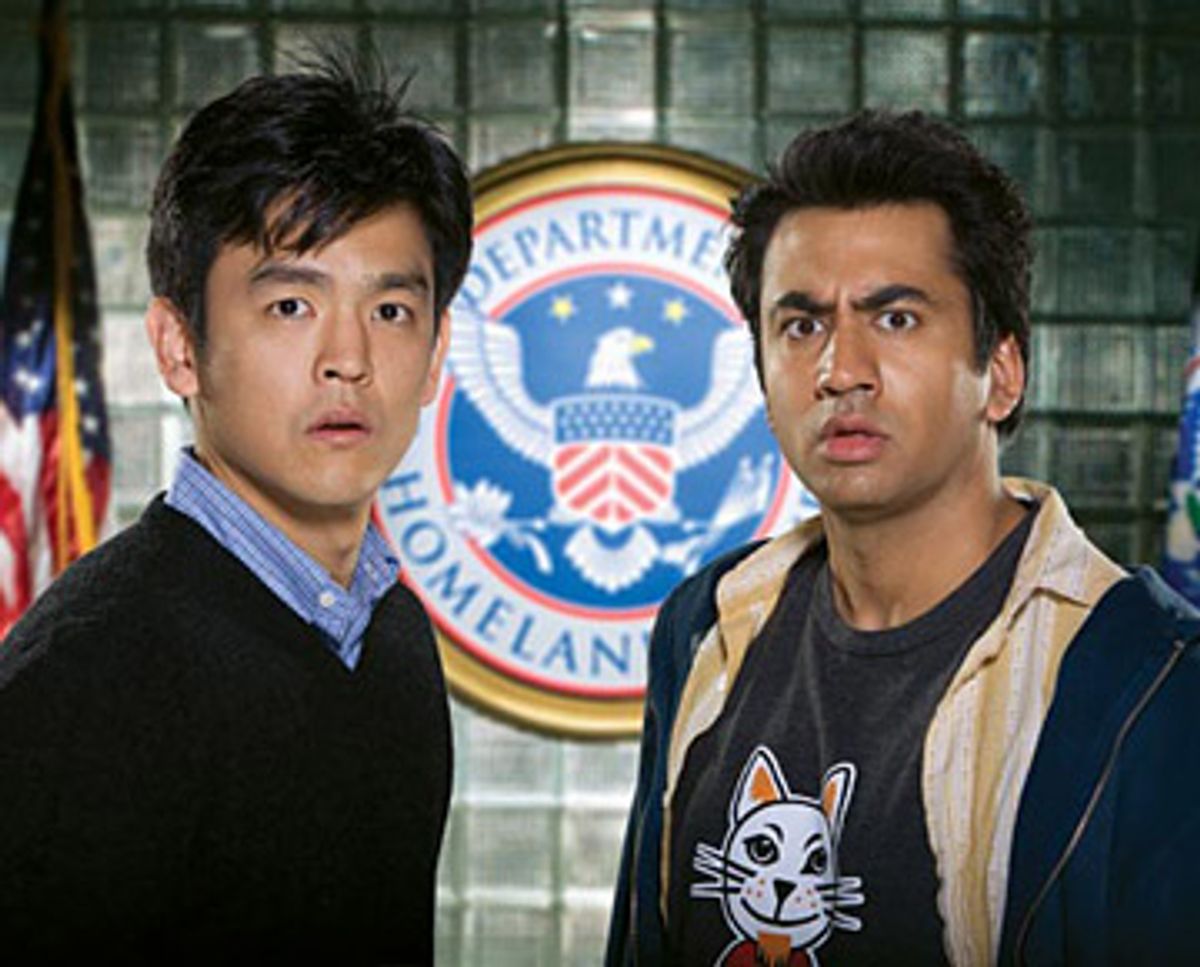 "Harold & Kumar Escape From Guantanamo Bay" isn't a political picture, but it is a patriotic one, in the nonpartisan sense of the word. This sequel to the 2004 sleeper hit "Harold & Kumar Go to White Castle" doesn't have the stealth factor in its favor: "White Castle" was one of those comedies that most viewers approached with low expectations; it built its audience slowly but surely, particularly after it was released on DVD in January of the following year. Part of the appeal of "White Castle" was that, instead of being just another stoner comedy (albeit a pretty funny one), it acknowledged the reality of racial diversity in this country without pontificating about it, à la "Crash": Its protagonists, the Harold and Kumar of the title (played by John Cho and Kal Penn), were, respectively, an overachiever and a future med student trying to put off overachievement as long as possible. Both were Asian-American, although you could probably get through two-thirds of the movie (if not the whole thing) without even thinking about their ethnicity. Instead of your typical teen comedy featuring white principals with a few sidekicks "of color" thrown in, "Harold & Kumar Go to White Castle" made the point -- without doing anything so obvious as making a point -- that no one in real life can say definitively what an American looks like. Why can't it be that way in the movies, too?

Once you've posited that sly question, what do you do for a second act? I was worried that "Harold & Kumar Escape From Guantanamo Bay" -- which was written and directed by Jon Hurwitz and Hayden Schlossberg, who also wrote (but didn't direct) the first picture -- wouldn't match the squirrelly charms of its predecessor. And it doesn't quite: I'll never feel as affectionately toward it as I do toward "White Castle," which snuck into the No. 10 slot on my "10 Best" list for 2004.

But "Harold & Kumar Escape From Guantanamo Bay" is that rare sequel that builds on the movie that came before it without crushing its attributes to death. "Escape" doesn't feel belabored. Giddy, freewheeling and sweet-natured, it pulls off the effect of seeming spontaneous, a tall task by itself. The woolly plot kicks off with Harold and Kumar packing for their trip to Amsterdam -- they're going to follow Maria (Paula Garcés), the young woman on whom Harold has a crush, so he can win her over. Harold, the finicky account executive, chooses his clothing thoughtfully from the meticulous arrangement of cubbyholes in his closet; Kumar ferrets through the piles of clothes on his floor, picking out the items that look -- or smell -- clean. At the airport, they run into an old friend, an appealing young woman named Vanessa (Danneel Harris), and her preppy, upright-citizen fiancé, Colton (Eric Winter). It turns out that Vanessa is Kumar's ex, and he has never quite gotten over her, a fact that becomes clear when Kumar later finds himself in the company of two luscious babes who are happy to make out, naked, in front of him.

But I'm getting ahead of myself: First, Harold and Kumar are detained in, and sneak out of, Guantánamo Bay, after a mix-up involving a smokeless bong that Kumar has smuggled onto their flight. A devious, boneheaded fed, Ron Fox (Rob Corddry), sets out to recapture them. Somewhere along the way Neil Patrick Harris, reprising the role he played in the first picture (that of himself), shows up and, after nibbling too many 'shrooms from a baggie, has a close encounter with a glowing white unicorn.

There's much more, including a Klan rally that's really just an excuse for a beer blast, but the crazy patchwork that makes up "Harold & Kumar Escape From Guantanamo Bay" works best if you don't know what's coming next. Hurwitz and Schlossberg do an almost miraculous job of sustaining, and linking, the most improbable gags: Just when you think the movie has pooped itself out, it comes rolling back with some wayward giggle you couldn't have predicted. And like its predecessor, "Escape" both sends up stereotypes and revels in them. At one point Harold and Kumar's stoner buddies Rosenberg and Goldstein, played by Eddie Kaye Thomas and David Krumholz (the former sporting a nice-Jewish-boy yarmulke, the latter an "I [heart] Smegma" T-shirt and a crocheted Rasta beanie), are dragged into Fox's lair for questioning; he tries to get them to talk by showering them with gold coins spilled from a pouch. They keep mum -- but after they're out of danger, they glance at each other and proceed to scoop up the coins. "Escape" is so good-natured that it can get away with a silly little scene capper like that.

The movie's generosity extends to our wily, untrustworthy president himself (played by James Adomian), who gets a surprise visit from our heroes. The George W. that Hurwitz and Schlossberg give us isn't so much a sympathetic figure as a shimmering, impossible fantasy: If only the most terrifying U.S. president in history (I, for one, think he trumps even Ronald Reagan) would take a toke and chill out, he'd recognize his hubris and greed for what they are. Or maybe not. But Hurwitz and Schlossberg do give W. the movie's most hopeful line: "You don't have to believe in your government to be a good American. You just have to believe in your country." Like "Harold & Kumar Go to White Castle" before it, "Harold & Kumar Escape From Guantanamo Bay" embraces America's capacity for decency and kindness. The possibility that we could actually be that great country isn't just a pipe dream. Only sometimes you need a pipe to truly believe in it.