An infamous 1976 photo captured a violent encounter between white Bostonians and a black lawyer during an anti-busing rally. A new book explains why this image continues to haunt and define us. 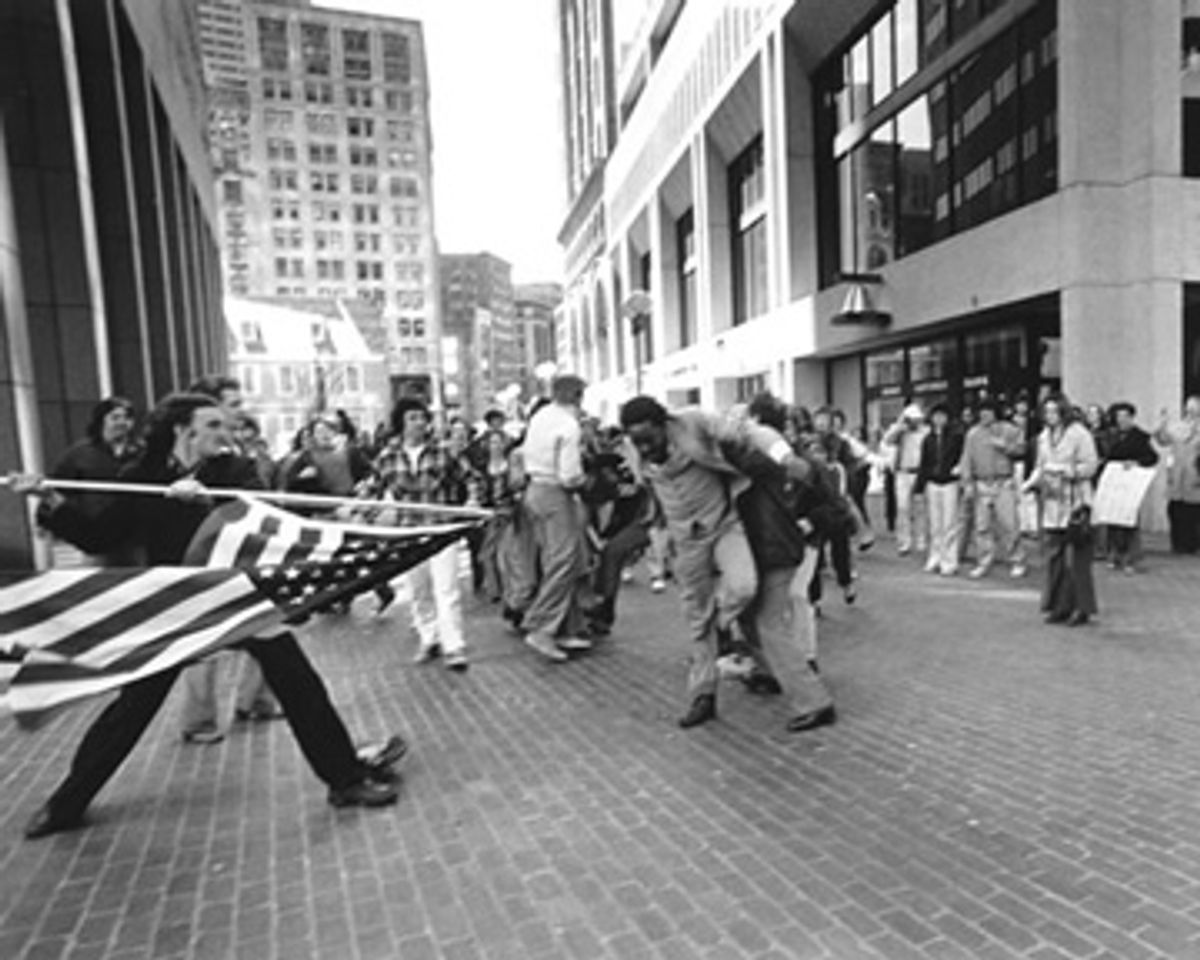 It was nothing more than a minor skirmish, to hear many of the parties tell it. Beautiful spring day ... couple hundred high-school kids massing outside City Hall ... a few tempers flare ... what's the big deal?

After all, in that spring of '76, tempers were flaring all across Boston. Two years earlier, U.S. District Judge Arthur Garrity had ordered the city to desegregate its schools through busing, and now kids from mostly black Roxbury were being forced to share classrooms with kids from mostly white South Boston, and the "Southies" didn't like it one bit. Boycotts and protests followed in short order, and when a crowd of white students descended on City Hall Plaza on April 5, it was pretty much business as usual.

Until a black lawyer named Ted Landsmark, on his way to a meeting, chose that particular moment to pass by. At once, a knot of protesters set upon him, knocked him down, kicked and punched him, shattered his glasses, broke his nose. Landsmark stumbled to his feet and walked away.

No more than 20 seconds had elapsed, but an enterprising cameraman named Stanley Forman had been there the whole time, snapping away. And the image he came away with, once seen, can never be forgotten. On the right: Landsmark, writhing in another man's grip. On the left: a high-school student named Joseph Rakes, caught in the act of driving an American flag into Landsmark's pinioned body.

The picture took 1/250 of a second to capture, and more than three decades later, it's still with us, still defining a pathological strain in our culture that shows no sign of going away.

What explains the image's power? To begin with, it is, like many "accidental" photographs, an extraordinary work of art. In his estimable chronicle, "The Soiling of Old Glory: The Story of a Photograph that Shocked America," historian Louis P. Masur does a fine job of unpacking the picture's aesthetic antecedents -- Paul Revere's engraving of the Boston Massacre, the flag raising on Iwo Jima, even Rubens' "Christ on the Cross" -- and an equally good job of "reading" the picture as metaphor.

At a strictly symbolic level, of course, it's a meditation on the American flag. Old Glory, once a tool for colonizing territory, is now being used to recolonize a U.S. citizen. "The protester," writes Masur, "is trying to implant the flag into the black man and claim ownership." (What the author is perhaps too polite to add: The flag is aimed not at Ted Landsmark's face but at his groin. The fear of black potency is every bit as palpable here as it is in "The Birth of a Nation" or "Light in August.")

Beyond its status as artwork, the picture gains immeasurable strength from its context. The attack on Landsmark happened during America's bicentennial -- and in Boston, of all places, that cradle of liberty, a stone's throw from where black martyr Crispus Attucks was shot down. Americans fed a steady diet of Selma and Birmingham and Montgomery and Little Rock were forced to acknowledge that a Northern city could be every bit as riven by race.

In fact, for many decades, de facto segregation had been quietly entrenching itself in Boston's working-class neighborhoods. (The Red Sox were the last team in the major leagues to field a black player.) The busing struggle was just the flashpoint that lit up ancient divisions. Look in the background of Forman's picture, and you'll see a swell of flannel shirts and Celtics jackets: the warrior garb of the Southies, white Irish Catholic working-class folks who, in Masur's words, had "watched their economic status decline, felt deep ties to their local community, disdained the riots that had engulfed the nation (Watts, Newark, Detroit, even Roxbury), and resented all the effort on behalf of black rights." Until Stanley Forman came along, this "toxic cocktail of racial hatred and patriotic fervor" had never been captured so starkly and succinctly.

The story of Boston's busing war is told in more sumptuous detail in J. Anthony Lukas' classic "Common Ground" (which was inspired by Forman's photo). Masur, though, has the advantage of being able to follow the story's threads to their natural conclusion. The Landsmark firestorm did succeed in crippling the anti-busing movement, but over time, white flight rendered the issue moot, as South Boston families increasingly fell back on parochial schools or fled to the suburbs. Between 1974 and 1987, the percentage of white students in Boston public schools plunged from 55 to 26 percent; by 1999, it had dropped to 15 percent.

Black students today account for roughly half the city's public school population, but most of their families moved there after the busing crisis. "You might as well be talking to them about Lincoln freeing the slaves," says Ted Landsmark, "as talk to them about busing and how it tore neighborhoods apart." Landsmark himself got up from the pavement of City Hall Plaza and went on to a distinguished career in public service, including a term as director of the Safe Neighborhoods Project. Joseph Rakes, not surprisingly, struggled. Tarred as the "flag kid," he plowed through a series of minimum-wage jobs, fled a murder charge (later dropped), and eventually settled into a stable life as a family man and construction worker. Heeding his grandmother's advice to "find a job no one wants to do and get good at it," Rakes now specializes in hazardous waste. (When will the symbolism end?) Asked about the flag incident, he told a reporter: "There was no thinking whatsoever. It was more rage than anything. I didn't know until it was over what had happened ... I mean, when you think about it, that Stanley Forman had a quick finger."

And that same finger, which seemed to scratch out a moment of unvarnished truth, proves, on closer inspection, to be as fallible as any other recording instrument. Look at the complete roll from Forman's camera, and a more complicated portrait emerges. Rakes, we now see, was not driving the flag at Landsmark but swinging it in his general direction. In reality, the flag never struck its intended victim. Landsmark's nose had already been broken when he was knocked to the ground. (A black doctor took care to exaggerate those injuries by covering Landsmark's face with tape.)

Even more surprising, the man who seems to be pinning Landsmark's arms behind him -- anti-busing organizer Jim Kelly -- is actually helping him to his feet. In the image that follows, Kelly has interposed himself between the mob and its victim, creating a human shield that allows Landsmark to escape; Forman never once leaves his post.

So, in addition to witnessing racial violence, we are watching a white man come to the rescue of a black man. We may also be looking at something more complex: the moment in American history where class begins to supersede race. What sets Landsmark apart from the crowd, after all, is not just his color but his dress. Take away the fact of his race, and he still represents everything Southies would despise: a Yale-educated lawyer in a three-piece suit, sticking his nose into workingmen's business. (Although his attackers didn't know it, Landsmark was heading to City Hall to lobby for minority hiring in construction jobs.) For the first time, perhaps, we are seeing the flag transformed into a weapon of class warfare.

Since then, that transformation has taken somewhat more benign forms -- think of the flag-burning amendments or George H.W. Bush's daffy trip to the flag factory -- but the underlying message remains every bit as malignant: "This is my America, not yours."

In the middle of reading Louis Masur's book, I stopped to watch ABC's coverage of the April 16 Democratic candidates' debate. A woman named Nash McCabe, beamed up from Latrobe, Pa., posed the following question to Barack Obama: "I want to know if you believe in the American flag." To be sure, there was a "context" for that question: the missing flag pins in Obama's lapel, the Rev. Wright's sermons. But this was a question that presupposed its own answer. Anyone who looks and talks and acts -- and bowls -- like Barack Obama cannot be considered a true American. And as I watched Obama formulate a reply, it seemed to me we had journeyed back once more to City Hall Plaza -- did we ever really leave? -- and that Joseph Rakes' flag was once again hoisted, moving in for the kill.