Long before there was "Law and Order," a TV criminal defense attorney named Perry Mason brought high courtroom drama to the masses. 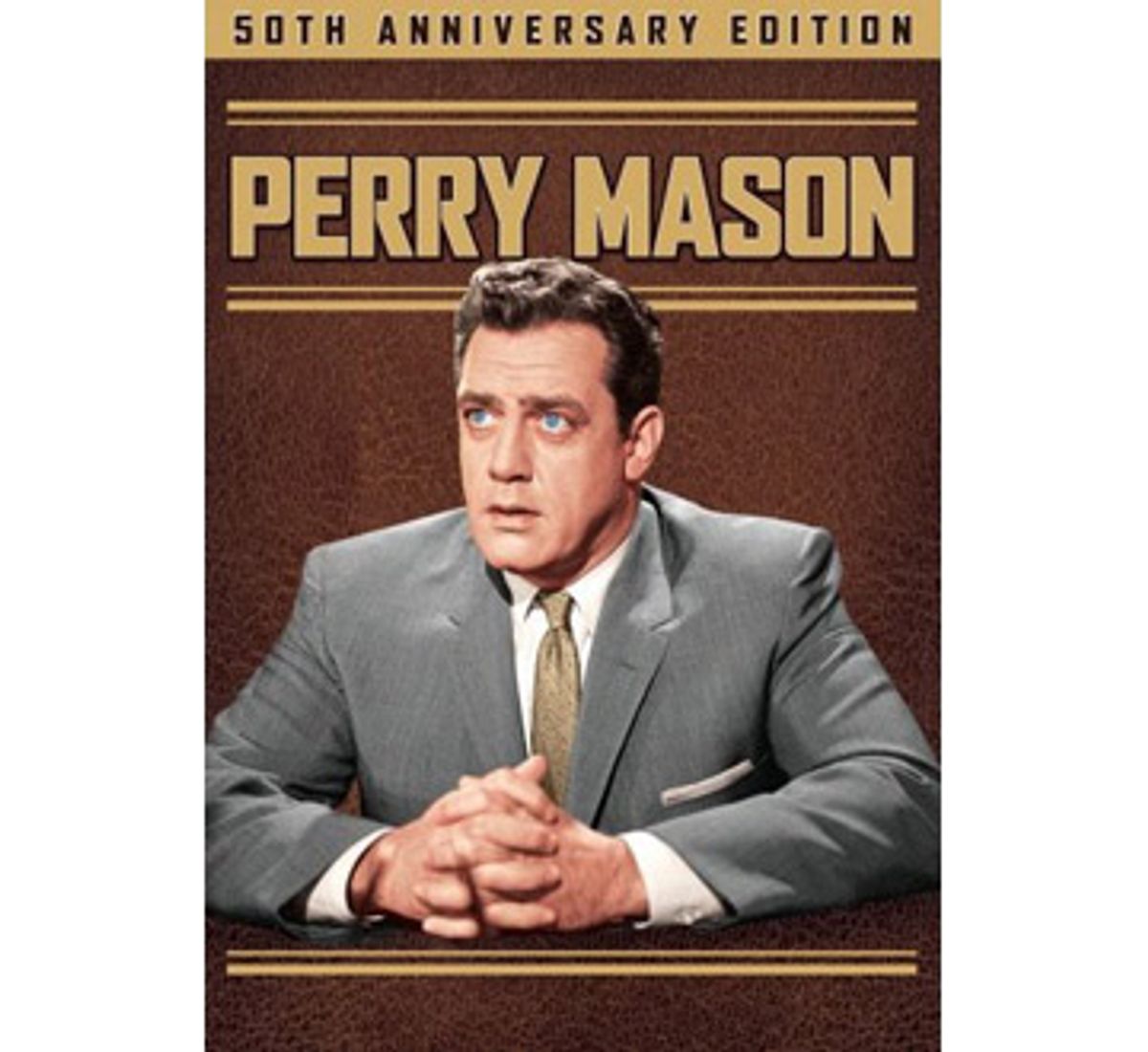 Journey, my children. Back to a time when Dick Wolf didn't have a 24-7 stranglehold on criminal-justice TV. Back to a time when God was on the side of the accused and not the accusers. A time when law and order was upheld not by a rotating cast of cops and prosecutors but by a single criminal defense attorney who made weekly mincemeat of the state's designated enforcers.

His name was Perry Mason, and he was the brainchild of a bad writer named Erle Stanley Gardner, whose titles read like 200-proof pulp: "The Case of the Negligent Nymph," "The Case of the Grinning Gorilla," "The Case of the Runaway Corpse." But the world of "Perry Mason," the hugely successful courtroom show that ran on CBS from 1957 to 1966, is an altogether orderly affair. In the opening sequences, we know that some person will prove so disagreeable that a large group of his acquaintances will practically fight each other over who gets to kill him. We know that, from this scroll of suspects, Perry Mason will agree to defend only the one with the most evidence against him. (Never mind that the client's explanations will run some gamut of the following: "We struggled ... Somehow the gun went off ... I must have blacked out.")

We know this, too. In the act of interrogating his final witness, Perry Mason will raise his voice. A decibel or two, no more, but enough to send a seismic tremor through the courtroom that drives the real murderer to his feet, shouting his guilt like a whore in a revival meeting.

Mistrial? No, you fool! Another win for Perry Mason.

The episodes chosen for the 50th anniversary DVD release boast early appearances by star-hatchlings like Robert Redford, Burt Reynolds and Ryan O'Neal, as well as a bizarre guest-lawyer performance by Bette Davis at her herky-jerkiest. But the shows themselves are still the attraction. Watching them, you may be surprised at how gore-free they are -- virtually every murder takes place off-screen -- and how unafraid the writers were of boring us with complicated points of law. But there's a larger and subtler surprise: A show conceived in the Eisenhower era is, for all intents and purposes, a harbinger of 1960s counterculture, the kind of anti-law enforcement, pro-Bill of Rights template that Abbie Hoffman might have scripted.

Note first the story arc of every script, which encourages us to rejoice not in the unmasking of the murderer (who is sometimes sympathetic) but in the vindication of the prime suspect (who is always sympathetic). Note, too, that the show's least appealing characters are the oily police lieutenant (former Mercury Theatre actor Ray Collins) and the pit-Chihuahua district attorney (William Talman) who, given how often Mason dines on him, is aptly named Hamilton Burger.

In real life, a prosecutor with Burger's dismal track record would have long ago been sent down to domestic or traffic court. In television's cruel Sisyphean ritual, Burger is forced to enact the same trajectory of humiliation week after week, beginning always in hope, finishing on a pyre of despair. By the time Perry has staged his final coup de justice, the bleary-eyed Burger can no longer muster the gumption for a single objection. He's riding a brief to nowhere.

By default, then, our competitive allegiances tilt toward the defense team, which includes tireless non-union gumshoe Paul Drake (William Hopper, son of Hedda) and attractively levelheaded secretary Della Street (Barbara Hale), who, in a nod to progressiveness, gets to address her boss by his first name.

And then there's Perry himself, who is neither heroic nor anti-heroic but simply ... well, what, exactly? Before he landed this sinecure, Raymond Burr was best known to moviegoers as a heavy: the wife-killer in Hitchcock's "Rear Window" and, ironically, the melodramatic D.A. who sends Montgomery Clift to death row in "A Place in the Sun." Nothing about Burr's middle-linebacker build implies white-collar finesse. Nothing in his demeanor suggests he'd care to see Della in something other than office wear. One can only conclude that the "Perry Mason" producers took their cue from the recesses in Burr's handsome, sad eyes. They wanted their star to be, at some level, unknowable.

Little did they know how unknowable he was. According to a new biography by Michael Seth Starr, Burr went to extraordinary lengths to conceal his gay life, inventing not just girlfriends but dead wives and children. He built his whole world around secrets, and far from hobbling him as an actor, these secrets trained him to play someone who kept his own counsel. In virtually every "Perry Mason" episode, there comes a point where a witness's unexpected response causes Mason to stop and smile softly to himself -- a moment of private resonance, in which an inner life briefly flashes out. Is it Perry Mason's or Raymond Burr's? Hard to say, but the man we're watching on that screen knows both the virtue and the cost of silence.