Obama and Clinton have trumpeted their religious credentials -- but is it really more secularism that they need? 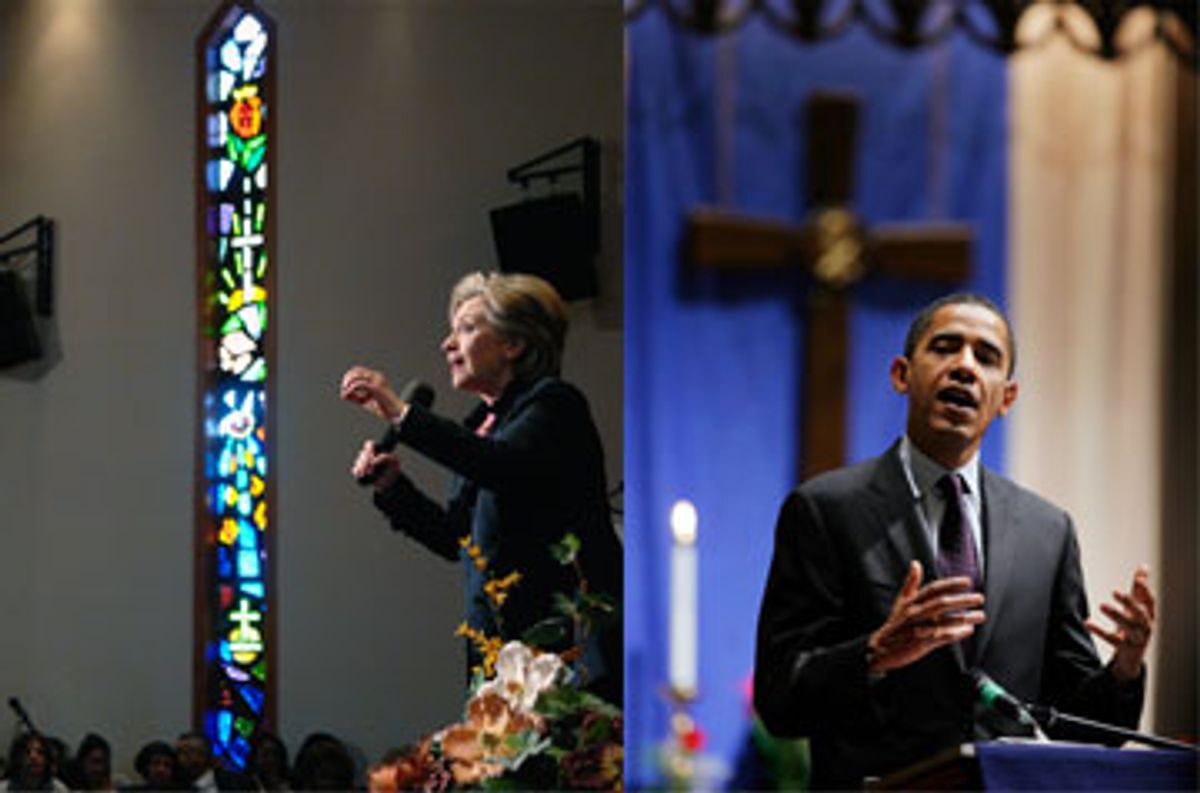 "The single biggest gap in party affiliation among white Americans is ... between those who attend church regularly and those who don't. Democrats, meanwhile, are scrambling to 'get religion,' even as a core segment of our constituency remains stubbornly secular."
-- Barack Obama, from "The Audacity of Hope"

This is a week when the Illinois senator probably wishes that he could say, "I'm from the stubbornly secular wing of the Democratic Party." Back in the days when religion in presidential politics was mostly limited to greeting Billy Graham when he arrived for an Oval Office photo op, White House candidates did not have to worry about off-the-reservation reverends. But that was before the 2008 Democrats called out the image engineers to bridge the God Gap. In Obama and Hillary Clinton, the Democrats boast the most overtly religious cross-on-their-sleeve presidential candidates since Jimmy Carter prayed alone.

Now Obama may be paying a political price (precise cost estimates will be available only after the May 6 North Carolina and Indiana primaries) for his embrace of wrong-way Rev. Jeremiah Wright. Just last month in his much-heralded race-and-religion address in Philadelphia, Obama, although he rejected Wright's ideological invective, still said of his longtime pastor, "As imperfect as he may be, he has been like family to me. He strengthened my faith, officiated my wedding and baptized my children." Only Tuesday, in Winston-Salem, N.C., did Obama finally read Wright out of his political congregation: "I want to use this press conference to make people absolutely clear that obviously whatever relationship I had with Reverend Wright has changed, as a consequence of this. I don't think that he showed much concern for me."

Deciphering Wright's motivations in delivering his recent jeremiads ranks right up there as a daunting psychological exercise with deconstructing Bill Clinton's campaign behavior. But what seems unambiguous is that Obama takes it personally that Wright chose to highlight his admiration for 20th-century hero Louis Farrakhan and to advance his diabolical theories about the origins of AIDS from the pulpit of the National Press Club. There was a wounded quality to Obama's comment: "I don't think he showed much concern for me."

Hillary Clinton has been as pantingly eager as Obama to testify about her religious beliefs in public, although her comments on theology often tend toward the saccharine. Just two weeks ago at a candidates-and-God religious forum broadcast on CNN from the campus of Messiah College in Grantham, Pa., the former first lady confided, "I have ever since I've been a little girl felt the presence of God in my life. And it has been a gift of grace that has for me been incredibly sustaining. But, really, ever since I was a child, I have felt the enveloping support and love of God. And I have had the experiences on many, many occasions where I felt like the holy spirit was there with me as I made a journey."

The point is not Clinton's and Obama's private religious beliefs, but their political calculation in searching for every possible forum to signal to religious voters that Democrats too are devout. The Republicans have long blurred the line between God and GOTV (Get Out the Vote), with Mike Huckabee, the runner-up for the GOP nomination, becoming probably the first major presidential candidate since William Jennings Bryan who unequivocally does not believe in evolution. Until recently -- with the exception of Jimmy Carter's 1976 born-again boasting -- the Democrats in their role as America's secular party have been far more reticent about reveling in religion.

Aside from a ritual "God bless America" as he concluded, Al Gore's only reference to the deity in his 2000 acceptance speech to the Democratic Convention was attacking "bean-counters at HMOs who ... don't have the right to play God." John Kerry, who had been schooled in the way that JFK handled the Catholic issue in 1960, was a reluctant warrior on the battlefields of religious pandering. Accepting the 2004 nomination, Kerry declared, "I don't wear my own faith on my sleeve. But faith has given me values and hope to live by from Vietnam to this very day."

There are dozens of reasons (ranging from the Supreme Court to the inept campaign counsel of strategist Bob Shrum) why Gore and Kerry never made it to the White House. But after the narrow 2004 "why-o, why-o Ohio" defeat, the Democratic consultants -- all singing out of the same hymn book -- decided that the party's fatal mistake was getting whomped by a better than 3-to-1 margin among evangelical Christians. Thus was born the Democratic strategic gospel that the devil take the hindmost because in 2008 God would be in play.

In a sense, the Democrats have been lucky since they are blessed with two candidates who have been walking the pews of religion for decades -- from Obama's lyrical autobiographical account of joining the Trinity United Church of Christ to Clinton's public flirtation with the religiously based "politics of meaning" during her early White House years. But now the Democrats may be dealing with the dread consequences of answered prayers.

The wrath of Wright calls into question not Obama's faith but his judgment, the same quality that he trumpets when it comes to his early opposition to the Iraq war. Clinton, for her part, may currently be feeling like she has been touched by a miracle, but it is difficult to reckon how she has gained votes through her own public religiosity. In short, if the Democrats win back the White House this November, it will be presumably because of earthbound considerations like Iraq, the economy and gasoline prices. But if the Democrats lose -- especially if the Wright-way-to-pray issue haunts Obama -- then the only response from partisans will be an anguished, "Oh, God!"