Take a rattle-trap road trip with a trio of Romanian losers, a haunting cruise "Up the Yangtze" and a silky slide into a Hitchcock-lite thriller. 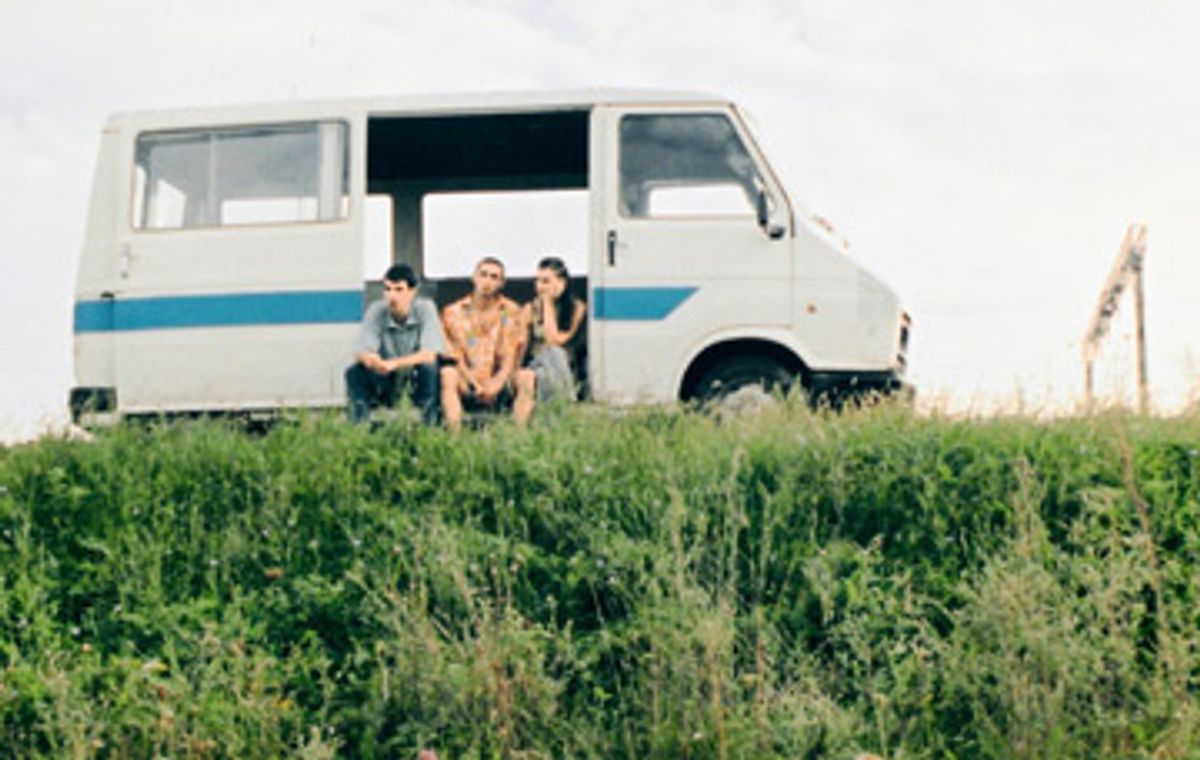 Left to right: Alexandru Papadopol as Ovidiu, Dragos Bucur as Vali and Ioana Flora as Bety, as seen in "Stuff and Dough."

I'm still buried under an ongoing avalanche of Tribeca films, but I need to gulp some oxygen and fling out some love for a couple of movies playing in actual theaters. So far only Tribeca-overwhelmed New Yorkers can catch "Stuff and Dough," the dark, funny, mysteriously affecting 2001 debut of Romanian director Cristi Puiu, who would go on to make the award-winning "Death of Mr. Lazarescu." (It's never played in the United States before.) Like so many recent Romanian films, "Stuff and Dough" is tremendously well made on almost no budget, and blends the rhythms of ordinary life with a subtly ominous atmosphere and elements of thriller. It follows a young entrepreneur and two of his no-account friends as they take a road trip across Romania's dull central plain, on a dubious errand for a local mobster.

Along the way, Ovidiu (Alexandru Papadopol), his loutish buddy Vali (Dragos Bucur) and Vali's girlfriend Betty (Ioana Flora) must deal with many delights of life in post-communist Romania, from mysterious assailants to corrupt cops, bad roads, fuel shortages and the erratic prices of cooking oil and Coca-Cola. It's a terrific little movie, gritty, real, ironic, ruthless and deeply humane. Aspiring American filmmakers should study it before they go off and make yet another faux-earnest, self-pitying indie. (Now playing at Film Forum in New York; further engagements should follow.)

Yung Chang is a Canadian director whose grandparents came from China, and his witty, lovely and profoundly unsettling documentary "Up the Yangtze" takes him back to the legendary river of his grandfather's homeland, now transformed beyond recognition. "Up the Yangtze" also completes an accidental trilogy of memorable recent films depicting the Three Gorges dam, which has reshaped the Yangtze valley, destroyed many towns and relocated roughly 2 million Chinese citizens. The other two are Jennifer Baichwal's documentary "Manufactured Landscapes" and Jia Zhangke's fictional docudrama "Still Life."

Chang travels on a cruise ship up the Yangtze with a boatload of visiting Westerners, who seem generally befuddled by the complexity of Chinese society and the rapid change happening around them. If he can't resist directing a few jabs at his fellow passengers, his real subject is the backstage world of young Chinese who work on the boats under assigned English names. His central character, known as "Cindy" on shipboard, is the diminutive daughter of a poor peasant family about to be displaced by the rising water. She's bright, ambitious and emotional, and dreams of going to high school and even college. Those things are out of the question for her parents, and she is sent to drudge work on the boats, which offer a chance to learn English, meet Westerners and see something of the world.

Chang's images of the Yangtze and the new megacities replacing the villages on its banks are spectacular, and his cast of characters rival any fiction film I've seen recently. Cindy's family belongs to an older, agrarian China the government is consigning to the past, while the cruise-ship boss, a blandly charming sycophant who addresses his workers in a pedantic blend of Mandarin and English, seems to be the country's future. His rules for talking to Westerners include no comparisons between Canada and the United States; no talk about Quebec, Northern Ireland or Israel; and never using the words "old," "fat" or "pale." I only hope that this year he's got Obama and Clinton on the list. (Now playing at the IFC Center in New York. Plays May 1-4 in Oklahoma City and opens May 16 in Los Angeles, May 23 in Coral Gables, Fla., June 6 in Boston, June 13 in San Francisco, June 18 in Stamford, Conn., and June 20 in Chicago and San Diego, with more cities to follow.)

If "Roman de Gare" is Claude Lelouch's best film in many years, an opinion that has been widely expressed, that's definitely damning with faint praise. Lelouch has spent most of his 46-year filmmaking career as the designated pop lightweight of French cinema, a reputation only cemented by his huge international hit from 1966, "A Man and a Woman." A glossy, enjoyable thriller that isn't quite as tricky or Hitchcockian as it wants to be, "Roman de Gare" gets by on high style and nice central performances by rubber-faced Dominique Pinon (better known for comic roles) as a mysterious motorist and Audrey Dana as the dumped, self-pitying woman he picks up at a rest stop. (The title, by the way, refers to the best-selling novels sold at train stations; we might say "airport fiction.")

Is Pinon's Pierre really, as he says, the ghostwriter and amanuensis to a famous mystery writer? (It's the great Fanny Ardant, in a thankless bitch-Machiavelli role.) Is he, instead, an escaped pedophile rapist who has the entire gendamerie after him? Or maybe just a suburban schoolteacher who's run out on his wife and family? By the time you know which one it is, Lelouch has locked himself into a nonsensical puzzle-plot, but the first half of the film, when Dana's Huguette brings Pierre home to her parents, passing him off as the doctor fiancé they've never met, is delirious with murderous and erotic possibility. (Now playing at the Angelika Film Center and Lincoln Plaza Cinemas in New York. Opens May 9 in Philadelphia, San Francisco and Washington; May 16 in Boston, Los Angeles, Seattle and Santa Barbara, Calif.; and May 23 in Chicago, Kansas City and Phoenix, with more cities to follow.)