Buzz Bissinger launches a profane, boneheaded attack on the Internet for being profane and boneheaded. 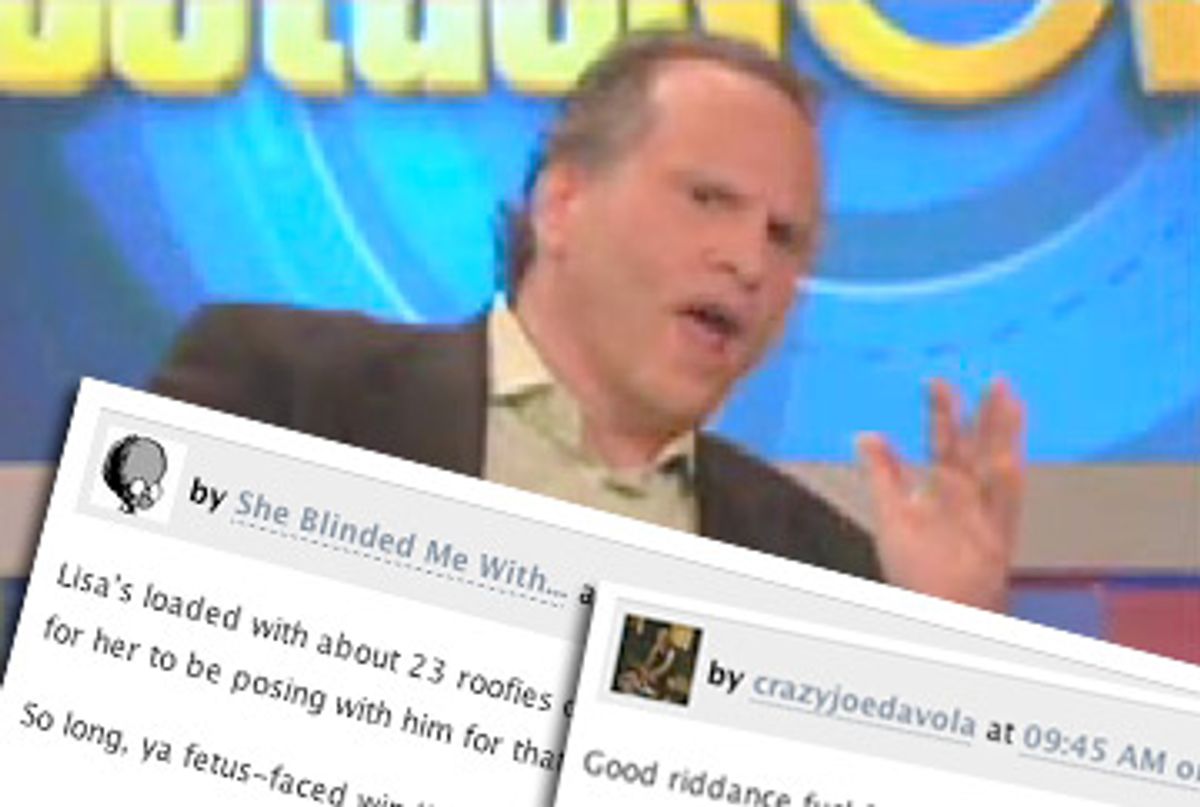 I missed that pompous ass Buzz Bissinger's ridiculous performance on "Costas Now" Tuesday night because I was busy watching galumpteen million playoff games, and all on boss-car-washing night too.

Bissinger appeared in a "round-table" discussion with Costas, Deadspin founder Will Leitch and Cleveland Browns receiver Braylon Edwards, who represented the people being covered.

They discussed the sports blogosphere, that nasty, wasty netherworld where people post pictures of NFL quarterbacks drinking from beer bongs and otherwise lower the sports discourse from the lofty heights of T.J. Simers and Jay Mariotti.

I know this because Deadspin posted a video of the segment. Bad, bad Interbloggy thing! How dare you make Buzz Bissinger, man of letters, look bad by showing a video of him saying the asinine things he thinks! A little respect please.

Bissinger launched a profanity-laced, idiotic assault on the Internet, which he doesn't like because it's profane and filled with idiots. How meta.

The segment opened with a packaged piece in which Leitch gave a boilerplate defense of his site's existence, then more of the same between Costas and Leitch live at the round table. Costas, who has recently taken some get-off-my-lawnish potshots at the blogosphere, joked, "To my surprise, I find you very palatable in person."

After a few moments, Bissinger could take no more. Perched sideways on his chair as though the very act of sharing a planetary atmosphere with Leitch was painful to him, he said, "I'm just going to interject because I feel very strongly about this: I really think you're full of shit."

Thus spake the man who says he has "spent 40 years of my life trying to perfect the craft" of writing -- which those punk kids on the Internet would never do -- and who is offended by the profane tone of the blogs.

That is, in the comment he printed out and brought to the show and read on "Costas Now," which to Bissinger apparently represents the entire Internet. This routine was very much like holding up a gummy worm and saying, "Food is terrible. I mean, look at this thing."

Things went on in this vein for about 15 minutes before Bissinger revealed himself to be not just a pompous jerk but also a hypocrite.

Interrupting as usual -- because as the defender of literature and higher learning whatever he had to say was, like, way more important than what anybody else had to say -- he told Leitch, "You say you don't want to be in the press box because the facts get in the way," which isn't even close to what Leitch had said. What Leitch had said was that he declined to apply for press access because "the minute I start doing that, I start writing for the other people in the press box ... I get a lot of benefit from having that distance."

But let's not let facts get in the way, right, Buzz?

"It seems to me," Bissinger continued, "what you're saying is, 'I don't want facts to inhibit me. Facts get in my way, so I'm going to sit in my little room and I'm going to give this nebulous fan's voice.'"

Pretty rich coming from a guy who sometimes -- for instance, in this very comment -- takes only a nodding interest in facts. Here, courtesy of FireJoeMorgan.com, are links to a bunch of smart people finding fundamental errors in a piece Bissinger wrote for the New York Times magazine Play last year about Kerry Wood.

He'd have found them himself if he'd bothered to do a little research instead of just transcribing the thoughts of Tony La Russa and other baseball men, as he'd done for his book "Three Nights in August" two years earlier.

And here he is acting like a slime bucket toward the excellent radio interviewer Boog Sciambi after Sciambi challenged the underlying thesis of the Wood piece -- that pitchers today are brought to the majors younger and with less minor league experience than in the past -- by asking Bissinger if he'd done any research to back it up.

The answer was no. The research that other smart people did -- see links above -- showed Bissinger's thesis to be exactly wrong. But that was long after Bissinger responded to Sciambi's impertinent question by randomly attacking one of Sciambi's co-workers. Sciambi hung up on him.

Bissinger is big on boneheaded generalizations about people who are younger than he is, which is 53. In "Three Nights in August," he wrote that the sabermetric movement had populated baseball front offices with "thirtysomethings whose most salient qualifications are MBA degrees."

"It is wrong to say that the new breed doesn't care about baseball," he wrote. "But it's not wrong to say that there is no way they could possibly love it, and so much of baseball is about love. They don't have the sense of history, which to the thirtysomethings is largely bunk."

If by "it's not wrong," he meant "it's absolutely 100 percent gold-plated wrong," then I'd agree.

Bissinger's generalization about the Interblogthingy came late in the "Costas Now" segment, as he lamented, I don't know, the death of the printed word, for which he, writer of books, reader of newspapers, which are printed on paper, you know, is evidently some kind of guardian.

"I just don't know where you're coming from," he said to Leitch, "except I think you are perpetuating the future, and I think the future in the hands of guys like you is really, really going to dumb us down to a degree that I don't know we can recover from."

Hey, Buzz: Here's something to read on the Internet. It's the complete works of William Shakespeare.

Here's something you can read in a newspaper. It's Ann Coulter's latest column.

Here's a book. It's called "How to Be a Super Hot Woman: 339 Tips to Make Every Man Fall in Love With You and Every Woman Envy You."

Books and newspapers are so much better than that appalling dump heap called the Interwhatsit, eh, Buzz?

Here's one more thing to read on the Webberlogthing. It's Leitch's funny, compassionate, frankly pitying assessment of Bissinger's performance, in which he explains why he sat calmly and let Bissinger rain spittle on him rather than, say, punch him in the nose.

"We cannot imagine any reasonable human being watching that display and saying, 'doggone it, that raving man has a point!'" he writes. "We are not mad at Bissinger, or Costas. We just watched a man immolate on national television. To have piled on the carnage would have been discourteous."

So I'm discourteous. That's how we roll on the series of tubes, dad.