If Obama wants to secure the nomination next week, he'll need to recapture the working-class voters who helped him rout Clinton in Wisconsin. 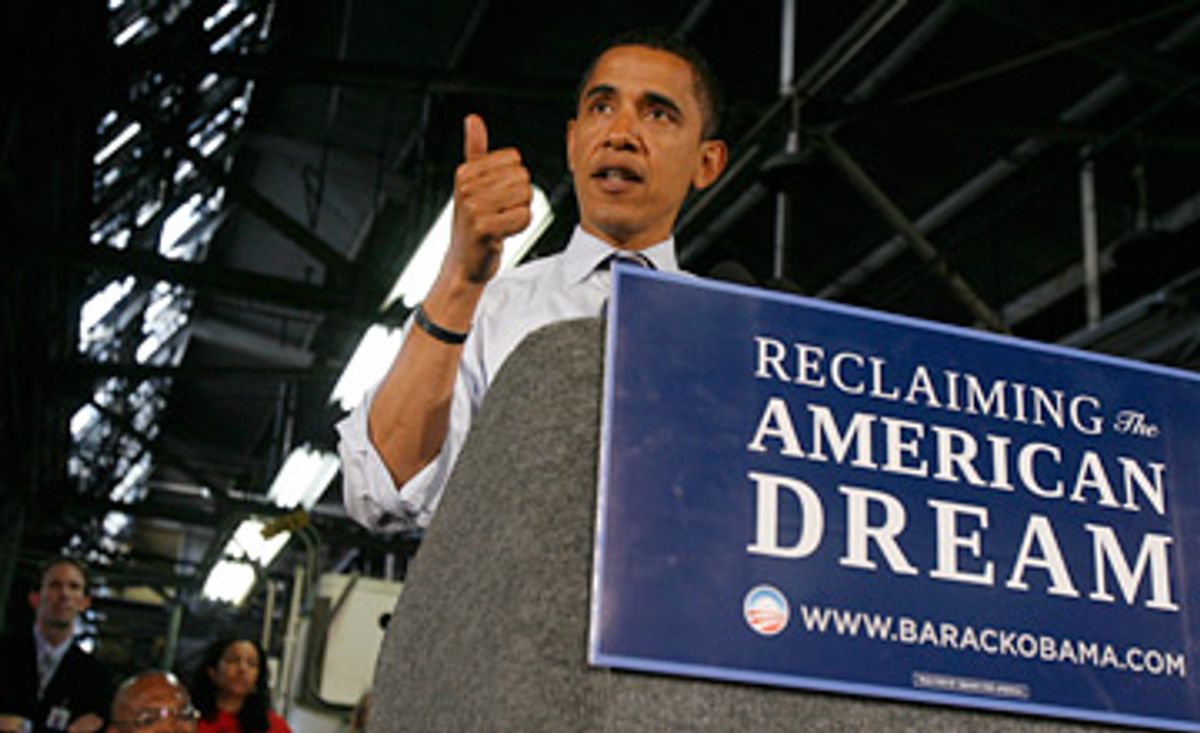 Over the last two months, the notion that Barack Obama can't win enough support from white working-class voters has been a key point of debate in the Democratic presidential race. After Rust Belt victories for Hillary Clinton in Ohio, and then in Pennsylvania, gave her flagging campaign new life, Clinton aides had new ammunition for the spin battle. "I think Democrats do have questions about whether or not [Obama] is going to be able to reach out and successfully win over the kind of blue-collar voters that Democrats need to win in order to take the White House back in November," Clinton strategist Howard Wolfson reiterated on CBS's "Face the Nation" on Sunday.

But that's not what Wolfson was saying back in February, when Obama clobbered Clinton by 17 points in Wisconsin, another state whose largely white, working-class demographics should have made it Clinton country. Census figures show the state is only 6 percent black, barely a quarter of residents have college degrees, and the median income hovers around the national average. But Obama won Wisconsin across the board, according to exit polls, taking almost every demographic group and subgroup. He won among voters who said the economy was bad, an issue that's been Clinton's core strength elsewhere. He won among Democrats, Republicans and independents in the state's open primary. He even won conservative voters, by a wider margin than he took the liberal vote. (The exceptions were women, split 50-50, and senior citizens, more of whom went for Clinton.) It was one of Obama's best nights of the entire campaign. In fact, on Feb. 19, when Wisconsin voted, Clinton's campaign didn't even acknowledge that an election had taken place. By the time the polls closed, Clinton was speaking in Ohio, and never mentioned the decisive loss she'd just suffered.

So why has Obama's broad appeal seemed to fizzle since then, slowing his bid for the party's nomination? A close look back at his win in Wisconsin could shed light on the next turn in the race. North Carolina and Indiana -- states home to numerous working-class white voters -- are set to hold primaries on Tuesday. Obama is expected to win North Carolina with strong support from African-Americans. But if his broad triumph in Wisconsin was an anomaly, Clinton could be poised for another comeback win in Indiana, yet another industrial state where economic woes are heavily on the minds of the working class. (Obama led Indiana in polls a few weeks ago, but now the race is close, with polls showing Clinton slightly ahead.) If Obama can achieve what he did in Wisconsin, though, it could quash Clinton's arguments about electability and shut the door on her dwindling chances to win the nomination.

Aides to both candidates, as well as neutral observers, said that the combination of factors that went into Obama's Wisconsin win may be tough to duplicate, especially with Clinton running a revived campaign that has hardened loyalties on both sides. "Everything was working for him," said University of Wisconsin political science professor Barry Burden, regarding the February blowout. "He was on message, the money was flowing, the machine was running cleanly. And that was not true for Clinton." But while the grinding battle over the last few weeks may have slowed Obama down, he can still look to Wisconsin to remind himself -- and any wavering superdelegates -- of how impressive his campaign has been when it gets on a roll.

Obama did head into Wisconsin with a big edge -- an underfunded, poorly organized effort by his rival. Clinton didn't bother sending paid staff to the state until about two weeks before the primary. "It really was right before Super Tuesday that it was, 'Oh my God, we are running a real presidential campaign,'" said Heather Colburn, Clinton's volunteer state director. "We just never thought those 32 delegates (up for grabs in Wisconsin) would matter, and now here's what we know -- those 32 delegates mattered."

The Wisconsin contest came in the middle of the roughest stretch of the campaign for Clinton. Nearly broke, on a long losing streak and suddenly facing a contest that went on weeks longer than her strategists expected, Clinton barely contested the state. She ran a last-minute ad attacking Obama for refusing a Wisconsin debate -- but then undermined her own message by failing to spend much time there herself. Her aides spent the last 36 hours before the election accusing Obama of plagiarism, a mostly bogus charge that never stirred voters much one way or the other.

Meanwhile, Obama handled the politics of the state nearly perfectly. Obama had started organizing in Wisconsin six months before the primary, as his campaign focused on a long-term strategy of picking up as many delegates as possible all over the map. Living just down the interstate didn't hurt, either. "We may root against the Cubs and the Bears -- which we do," said Paul Maslin, a neutral Democratic pollster based in Madison, Wisc., who helped run Howard Dean's 2004 campaign. "I do think there is a connection, though ... We're right next door." That kind of connection could help Obama in Indiana, as well. He has yet to lose a state that borders Illinois.

Wisconsin's political history helped Obama, too. The state was the birthplace of the progressive movement, and even working-class voters there may have been more open to candidates who promise to reform the system than elsewhere. The racial fault lines that appeared to work against Obama in rural parts of Pennsylvania and Ohio did not materialize in Wisconsin, either (although Jeremiah Wright also hadn't become a well-known name yet). "You could put the same demographics together and the same kind of community together, and I guarantee you that a liberal or African-American candidate will do about 5 to 10 points better" in Wisconsin than in other Rust Belt states, Maslin said.

But those factors alone don't explain why Obama beat Clinton so handily. If Obama was as unable to connect with white working-class voters as Clinton's aides believe he is, he couldn't have won Wisconsin by such a large margin. And he might not have come as close as he did to winning in Ohio or Pennsylvania -- Clinton strongholds -- either. Clearly, at some basic level, Obama appealed to Wisconsin voters in a way that, according to Clinton's argument these days, he simply shouldn't have.

A win of Wisconsin-esque margins for Obama in Indiana would probably end the campaign in his favor -- but that's not likely to happen. Wisconsin may have been the last time Obama could take so much support from voters inclined to support Clinton; her three wins out of four elections in March and April gave voters more reason to stick with her. But with the ailing economy increasingly at the heart of the 2008 election, the white working-class vote that Obama won in Wisconsin -- and lost after that -- may be key. If Obama wants to wrap up the nomination before June, he'll have to find a way to win those voters back.