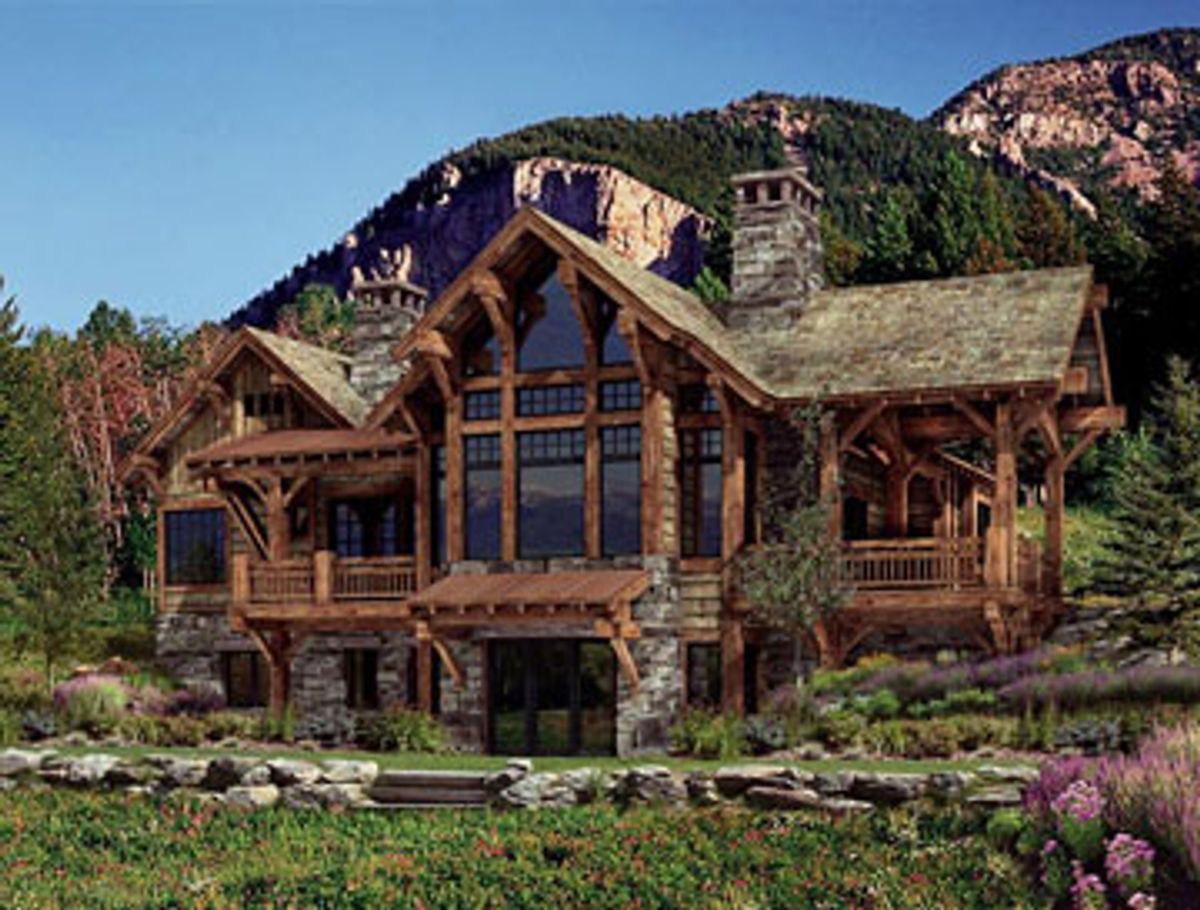 Somewhere on his 9,500-acre ranch in Montana's Paradise Valley, maybe as he watched the sun-dazzled Yellowstone River slide by the 12,000-foot Absaroka Mountains, Wall Street tycoon and self-described conservationist Wade Dokken must have had a vision: He would create a new kind of luxury community in the heart of the American West. Different from the typical recreation-based developments, utopian in concept, his Ameya Preserve would be a place of unsurpassed beauty, where bright and uncommonly well-heeled people could, however briefly, take their ease in a community implementing the kind of cutting-edge technology that could one day save the planet.

Along these lines, Ameya (Sanskrit for "without boundaries") would be powered entirely by solar, wind or geothermal sources, the buildings would be constructed according to the most advanced environmental specifications. Most prominently, Ameya would also be designed to "zero out," which means that the carbon emitted in the construction process would be scrupulously calculated, then offset by planting forest tracts somewhere else in the West.

In place of golf or skiing, residents could participate in a variety of Chautauqua-like events, conducted by Ameya "cultural directors," community members with distinguished backgrounds in the arts and sciences. Indeed, the people Ameya would have on board include some of the brightest stars on the American scene: best-selling author and restaurateur Alice Waters; soprano Renée Fleming; paleontologist Jack Horner; and former head of New York's Metropolitan Museum, Thomas Hoving, to name a few.

In terms of best and brightest, Dokken could hardly hope for better. The only thing he might wish is that Park County locals stay too dazzled to notice that his project is a meticulously designed biosphere for the über-riche, built smack in the middle of habitat that conservationists are fighting to save.

It's fair to say that, for the world's wealthiest, environmental issues have not always been a prime concern. Often enough, ignoring the environment is exactly how they got rich, and nowhere is this more true than in the American West, where the ravening extractive industries have run roughshod for over a century. It's not surprising that plush developments like Big Sky's Yellowstone Club (where skiers schuss on trademarked "Private Powder") occasionally have issues with the EPA.

The ultimate glitzification of sleepy mountain towns like Aspen, Colo., and Jackson Hole, Wyo., was more about insouciance than noblesse oblige. So to many, it was refreshing to hear a high-end developer talking knowledgeably about aquifers and habitat depletion. At first, Dokken got a lot of good ink about how painstakingly his initial proposal was put together. "I was kind of blown away (with it)," Jim Barrett, director of the Park County Environmental Council, told David Nolt, who penned an in-depth investigation of Ameya in NewWest.net ("The Voice of the Rocky Mountains"). "It's not perfect, but if we were to write the handbook on smart growth development ... that's basically what it was."

A North Dakota native, Dokken made his fortune on Wall Street as president of American Skandia, a financial services company. He sold Skandia to Prudential in 2003, returned west to deal in high-end real estate. (Price for an "Ameya Estate Preserve Lot": $2.1 million.) A tycoon who votes Democratic, a developer who sees himself as a conservationist, Dokken had straddled enough fences to know that if he was to build Ameya in a place like Paradise Valley, it would help to win over the community, and a fairly sophisticated one at that.

For years, the cowboys, ranchers, artists and working people of Livingston coexisted peaceably with celebrities, from movie folk like Sam Peckinpah and Jeff Bridges to famous writers like Jim Harrison and Tim Cahill. What they all had in common was they knew a great place when they saw one, and they liked it the way it was. In this manner, except for the bank account, notoriety and charisma, their move to the Montana Rockies was much like my own. I know a good place when I see one, too.

By last June, Ameya seeded the local papers with ads trumpeting the smorgasbord of benefits that the development, were it approved, would bring to Park County. These included a large spike in property tax revenues, a $50,000 donation to the rural fire department, the building of one Habitat for Humanity house for every 50 built at Ameya, funding for two advanced-placement teachers at Park County High School, and a 200-acre reservation for Livingston's "Farms for Families," a local program that promotes organic farming.

If such high-flying P.R. made locals a bit leery ("One can't help but notice the lengths to which Ameya is going ... to make their project palatable to the public," one letter to the Livingston Enterprise observed), the discovery that Ameya would try to buy two sections of public land made them downright skeptical. Though the project was still in the early planning stages, by July, locals began airing their doubts in a series of blogs and letters to the papers.

While some thought it laudable that Ameya eschewed the traditional 6,000-square-foot "Log-Mahal" for more discreet 4,000 footers, and that these homes would be powered renewably, and that the acreage upon which they'd be built was subjected to exhaustive impact studies, many struggled with pronouncements like "Ameya will be the most sustainable community ever built." Other project descriptions seemed almost nonsensical. A "private national park"? A "community of culture and conscience"? Finally, Ameya's assertion that "this project preserves natural resources that couldn't be preserved by any other means" involved the kind of death-defying, leap-of-faith logic few besides Dokken could manage.

Neither did it help that Ameya had a way of getting ahead of itself, and was prone to make claims it couldn't substantiate; for example, it was news to Thomas Hoving to learn he'd accepted Ameya's invitation, and it was news to the Corporation for the Northern Rockies to read that they'd already endorsed Dokken's project. More to the point, locals objected to a large-scale development built in a fire-prone drainage; they objected to the fact these were second, third or even fourth vacation homes; they objected to what seemed like Dokken's selective environmentalism.

Park County wildlife ecologist Peter Feigley, who smelled green wash early on, questioned Ameya's principles on the blog Luxist. "How many homes do the prospective clients [already] own, and how large are they? Think of how much jet fuel and gasoline is wasted by the ultra wealthy and their families, bopping around between their various homes and resorts." Feigley would go on to describe Ameya as "a sham; targeting wealthy and naïve, if not arrogant, individuals."

For Dokken, this proved too much. When you cracked on the ultra-wealthy, you were cracking on his people, and he couldn't let such a remark go unchallenged. He fired off a letter to Park County planner Mike Inman in which, among other things, he berated his critics for "class envy," claiming remarks like Feigley's were directed "at people who have had more success in life than the letter writers and blog writers ... Perhaps they were smarter. Perhaps they worked harder. Perhaps they managed their money better ..."

There followed a brief communal gasp. Had the locals just been scolded for not respecting their betters? Had Dokken been drinking? Whatever the case, everyone knew what really happened: A millionaire finally used the C-word.

It's weird to be discussing "class" in the 21st century West. For openers, many of us moved here precisely to get away from such a concept, and besides, the West is known for its frontier egalitarianism and hard-nosed reality checks; a beautiful but uncompromising place you were required to meet on its own terms. In short, it was a place where old-world conceits like "class" and "privilege" would get you nowhere, quickly.

Still, the fact that the high-end real estate market fairly suppurates with descriptors like "elite," "privileged" and "exclusive," underscores an unpleasant truth; the people who can afford to buy up the most beautiful spots in the West have no intention of leaving their aristocratic values back home. This would also seem to underscore Dokken's contention that the development of areas like the Paradise Valley is inevitable, and if he doesn't do it, some less visionary person will.

Be that as it may, Dokken seems to want it all; he wants to make money doing something that seems, environmentally speaking, indefensible, but he wants to be well thought of, too. Following his now infamous letter to the Park County Planning Board, he quickly wrote the Enterprise that he "deeply regretted (his) choice of words." He went on to state that "a careful reading of the remainder of the letter ... revealed an outline of environmental initiatives ..." that would, essentially, authenticate his commitment to conservation.

Mostly, a careful reading of the letter brings forth a number of statements that seem in direct opposition to the term as most people understand it. Consider: "Ameya Preserve will be the first carbon neutral community in the U.S. ... addressing the potentially greatest issue of our day in the single most responsible manner." On any green scale, how is the clearing, excavation and paving of elk habitat to build baronial-size, seldom-used luxury homes to be viewed as "responsible," no matter how they are powered, how many organic farming projects, easements or carbon switcheroos are in the works?

In any event, Dokken was hard-pressed to put the genie back in the bottle. For weeks, the Enterprise printed responses like the following:

"It is difficult to forgive Mr. Dokken for insinuating ... that we are stupid enough not to recognize a land speculator when we see one."

"The stark reality is that the Ameya Preserve will turn ... Paradise Valley into upscale suburbia."

"One piece of advice for you, Mr. Dokken. Don't get stuck in a snow drift, coming out of your 'preserve' ... you may find that nobody wants to stop and help you."

And finally: "Years from now, we will look back on the loss of these public sections with regret. The developer and his clients are the only ones who will be happy."

The coming summer promises interesting times for Ameya. While many elite developments have been hit hard by the slumping market (the Yellowstone Club and Idaho's Promontory, among them), interest in Ameya appears to continue unabated; in spite of local opinion, the development goes apace. In the past month, Dokken sold 4,000 acres of Ameya land to neighbor and fellow millionaire candy-magnate Giorgio Perfetti. The deal helped eliminate most of Dokken's debt, and helped move his project along toward final approval. Interestingly enough, Perfetti wanted to buy the land because he didn't want to watch it get developed.

The real genius to Ameya Preserve is that it foresees that global warming might take the fun out of being rich. What if they wouldn't let you jet to two vacation homes per week? But at Ameya, some of the wealthiest people in the world would get to feel that, with no noticeable change in their habits or behavior, they could still be part of the solution. In this way, what Dokken offers most closely resembles the medieval sale of Indulgences; instead of examining or changing behavior, well-heeled sinners simply paid the fine, went right on sinning. After all, they could afford it.

Fred Haefele's essays have appeared in Newsday, Outside, Wired and the New York Times Magazine. He is author of the motorcycle memoir, "Rebuilding the Indian." He currently lives in Helena, Mt.