In Indiana, Barack Obama settles back into his change-politics strategy, while Hillary Clinton campaigns as if the race itself is everything. 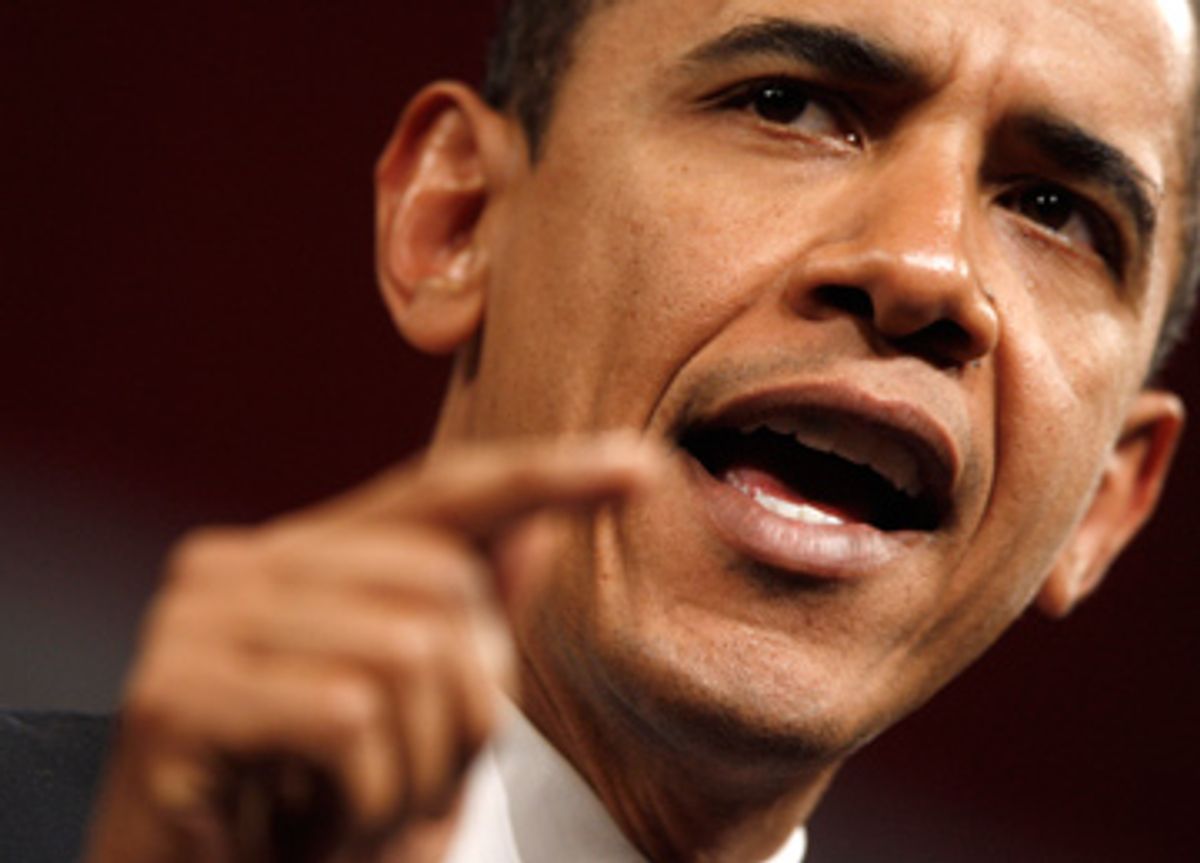 Barack Obama liked the speech so much that he gave it twice at high-profile events in Indianapolis over the weekend. Following Hillary Clinton and Howard Dean onstage Sunday night at the Indiana Democratic Party's fundraising gala, Obama repeated (at times word for word) the new campaign speech that he unveiled here Saturday morning. Some of the more pointed references to Hillary Clinton were stripped away for the Democratic dinner-theater crowd, but the essence of the speech remained unchanged.

What is significant is not Obama's deliberate repetition (if self-plagiarism were a crime, there would not be enough jails to hold the candidates and the reporters who cover them). But rather, at a moment in the campaign when Obama is trying to right himself after the uproar over Jeremiah Wright, the Democratic front-runner has deliberately chosen to offer the voters in Tuesday's Indiana and North Carolina primaries more of the same.

Under pressure to demonstrate in Tuesday's primaries (or, at least, in the exit polls) that he can relate to blue-collar voters, Obama alluded to his experience as a community organizer in Chicago when he said in both speeches, "Politics didn't lead me to working people -- working people led me to politics." But Obama also stuck to his vision of a new politics uncontaminated by the political cynicism of George W. Bush, congressional Republicans and, well, the Clintons.

As the Illinois senator said Sunday (and Saturday) in an implicit rebuke to Clinton's embrace of a gas tax holiday, "We can't afford to settle for a Washington where politicians only focus on how to win instead of why we should; where our politics dictates that we check our polls before we check our principles; where we calculate before we act on our convictions. That politics may get politicians elected, but it doesn't get America where it needs to go."

Clinton, for her part, is campaigning these days as if getting elected were not a slightly embarrassing necessity, but instead the central part of her being. All politics is partial artifice, but Clinton now seems to be enjoying its rituals as much as her husband does. There is no longer any subtlety to her campaign, as the candidate has long ago put Wellesley, Yale Law School and channeling Eleanor Roosevelt in the rear-view mirror.

Speaking to a large but far from Obama-size crowd at an outdoor rally in Indianapolis Saturday night, the former first lady declared in a voice raspy from overuse, "I've been talking about how we're going to get jobs back in Indiana. I've said that my campaign is about jobs, jobs, jobs!" Listening to this born-again populist, you could hear echoes of the favorite applause lines from two decades of consultant-driven Democratic politics as she said, "I think you have to decide for this election on Tuesday who's on your side and who you can count on to stand up for you and to work for you and to fight for you."

But often in politics, what works is a willingness to suspend any intellectual quest for originality. Through most of this campaign, Clinton has played against type when it comes to policy, jettisoning her cautious ways on issues like healthcare where she (unlike Obama) is willing to mandate individual coverage.

But Hillary the policy wonk has taken a vacation now that gas prices have become tops on the Hoosier hot plate. Clinton's poll-driven proposal to suspend the gas tax for the summer, and to use the proceeds from a windfall-profits tax on oil companies to pay for it, defies mainstream economic analysis, but it may pass political muster on Tuesday. Challenged by George Stephanopoulos in a Sunday morning ABC interview to name one economist who agrees with her gas tax proposal, Clinton sniffed, "Well, I'll tell you what, I'm not going to put my lot in with economists."

We have reached that bizarre phase in this unprecedented Democratic primary gantlet when no one really knows what the rules are anymore -- other than the one that winning primaries is infinitely better than losing them. But Obama probably could lose all eight contests remaining on the docket (seven states and Puerto Rico) and still hold a delegate lead, although such a fetid finish would panic Democrats more than MSNBC's being sold to a partnership of Rush Limbaugh and Ann Coulter. About all that is certain is that Clinton has to win either the Indiana or North Carolina primaries Tuesday or else the last dog truly will have died for the Democratic Party's first family of comeback politics.

As the state where the surveys and the soothsayers suggest that Clinton has her best shot on Tuesday, Indiana has an importance both real (79 delegates) and symbolic (another Rust Belt test of Obama's ability to expand his coalition). The demographics of Indiana, which the Democrats last carried in the 1964 Lyndon Johnson landslide, favor Clinton: 86 percent white and 19 percent college graduates. But an open-to-all primary and simple geography pose a more daunting challenge. Roughly 20 percent of the Democratic primary vote is in the Chicago media market (places including Gary and Hammond), which has been saturated with Obama coverage since his 2004 Senate race and is too expensive for the cash-crunched Clinton campaign to run TV ads.

"Northwestern Indiana is a critical part of us winning or Sen. Obama winning," says Robby Mook, who is running the Clinton effort here after directing her Ohio campaign. "If we come close to him there, there's almost no mathematical way that he can win the state." Clinton has spent more time in that corner of the state than anywhere other than the dominant Indianapolis area. The strategy for her campaign has been to use free media coverage to cut into Obama's margin.

There is also the mystery of how many Republicans will cross over in this open primary: A middle-aged woman with very conservative politics working in a downtown jewelry store said that she had been tempted to vote for Clinton in the Democratic primary to make mischief, but finally decided, "It didn't feel right."

If you clock the beginning of the Obama-Clinton donnybrook with the South Carolina primary on Jan. 26, which drove John Edwards from the race, then this fight that dominates TV news and the headlines has been going on for more than three months -- far longer than a general-election campaign. The result is that the fault lines have been exposed on both sides of the Democratic divide. According to a senior Obama advisor, voters in Indiana and North Carolina are "a little more locked in and less fluid in their sentiments" than Democrats in primary states that came earlier in the calendar. What this means, in practice, is that it may be harder to dislodge voters from their prior allegiances with the rap on the Rev. Jeremiah Wright and the rat-a-tat of dueling TV ads over the gasoline tax.

Howard Dean, in his Sunday night speech as national party chairman to the Indiana Democratic dinner, warned, "The only thing that can stop us from winning the presidency is ourselves ... In the long run this is not about Hillary Clinton and Barack Obama, this is about our country." Ostensibly, Dean was talking about the need for Democrats to rally around the eventual nominee. But there is an ill-concealed impatience among party leaders about the protracted contest. The problem is that this sense of haste has not trickled down to rank-and-file Democrats; despite all the arguments that the campaign without end is marring Democratic chances in November, there is no evidence that Hoosiers are planning to vote strategically to bring this contest to an end. Instead, they are watching with fascination as Clinton evolves into a pure politician and Obama resists evolving beyond his initial identity as a different-drummer candidate out to change politics.