The Iraq movie we've been waiting for

Nick Broomfield's pulse-pounding "Battle for Haditha" turns the infamous 2005 civilian massacre into a haunting classic about the inhumanity of war. 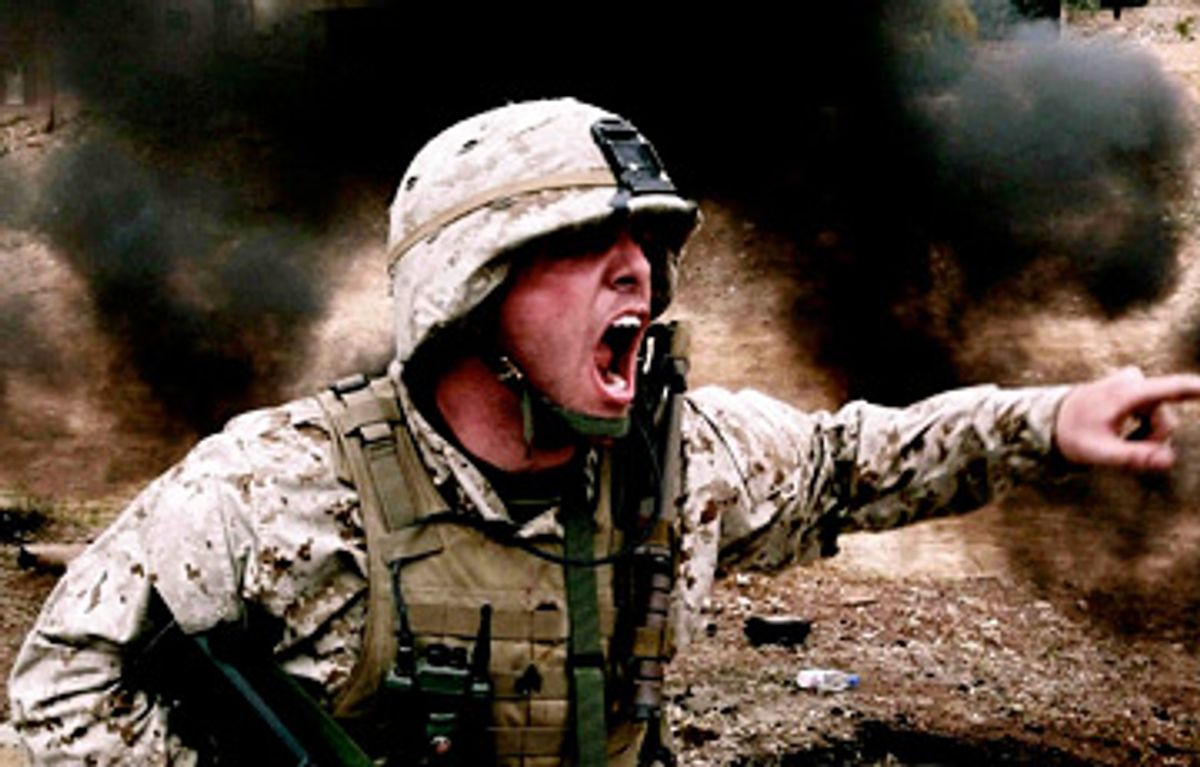 Eric Mehalacopoulos as Sgt. Ross, as seen in "Battle for Haditha."

After the shooting is over in Haditha, a Marine corporal named Ramirez takes a few seconds' break behind a Humvee to vomit copiously on the unpaved road where his unit has just been ambushed by an "improvised explosive device" (IED), or homemade bomb. He comes back out into the roadway, where another Marine seems briefly worried about him. "You OK, Ramirez?" he asks.

"I'm good," says Ramirez, a handsome Latino kid with almost feminine eyes and a fragile, uncertain charisma. He's got his profane, angry game face back on. His Marine face.

Everything about this momentary scene -- the nausea and puking, the nervous macho camaraderie that can't quite mask fear, the sense that these guys aren't talking about what they need to talk about, but can't possibly talk about -- is utterly convincing. The film they're in looks and feels like a documentary, and was directed by Nick Broomfield, who's known for making such sensation-seeking documentaries as "Kurt and Courtney" and "Aileen: Life and Death of a Serial Killer." But it's a narrative feature called "Battle for Haditha," which was largely improvised, cast with ex-Marines and Iraqi refugees and shot in Jordan. It might just be the movie this war has been waiting for.

I know, I know; we've been down this road before. Odds are excellent that hardly anyone in America wants to pay money to see this film. When you think about it, why would they? Most Americans are heartily sick of the Iraq war and all its sordid events, and even the minority of our fellow citizens who still support the Iraq war don't want to know much about it. Moreover, "Battle for Haditha" is about the most notorious of the alleged war crimes committed by U.S. forces in Iraq.

On Nov. 19, 2005, after a roadside bomb attack that killed one Marine and severely injured several others, members of a Marine convoy apparently ran amok in the Iraqi city of Haditha, barging into several houses and killing 24 unarmed civilians, among them seven children ages 1 to 14. Broomfield fictionalizes this event in the most devastating way possible, as a natural consequence of war, a massacre conducted not by Satanic imperialists or desensitized video-game robots but by ordinary young men in a dreadful situation. In fact, "Battle for Haditha" is a relentlessly exciting war film, unafflicted by moralism or finger-pointing, that leaves all the judgment to us. Which only makes it harder to bear.

Cpl. Ramirez (played magnificently by Elliot Ruiz, himself a former Marine corporal who was badly injured in Tikrit) is not the only protagonist in the film, but for American viewers he is unquestionably the focal point. He's an immensely likable hothead, a little wet behind the ears but fiercely loyal to the men under him. In an ordinary war movie, he'd be either the guy who gets tragically killed or the one who learns painful lessons and comes home as a sobered-up grown man. In this movie, he's a guy who barely notices crossing the line that separates soldier from murderer. You can put the blame lots of other places, as Broomfield's film makes clear -- the political and military machine that sent him there, the connivance of his superiors, the ruthlessness of "standard operating procedure" in Iraq and the nature of counterinsurgency warfare -- but this sympathetic, attractive young man commits unforgivable crimes.

We meet another likable character named Ahmad (Falah Abraheem Flayeh), as a burly, middle-aged pedestrian in the streets of Haditha, who goes home after seeing a body on the ground and tells his wife, "Those al-Qaida idiots just shot the English teacher." But Ahmad has mouths to feed, no means of legal employment and his own injured masculine pride to deal with; he was an Iraqi soldier when the U.S. occupiers disbanded Saddam Hussein's defeated military. As we gradually discover, he works for those al-Qaida idiots, even though he thinks their religious and moral crusade is bullshit, and he will detonate the IED as the Marine convoy passes.

Ahmad is left horrified by the consequences of his actions, and you can't avoid reflecting that in an alternative history of recent years, he and Ramirez could have ended up working together on rebuilding Iraq. His contacts among the Islamic militants are presented as narrow-minded boobs on one hand or shrewd tactical opportunists on the other. Some are obsessed with driving away alcohol merchants, but others see the Marines' debacle in Haditha less as a human tragedy than as a golden opportunity to win the populace to their side. As one imam notes contentedly near the end of the film, "The United States has lost the battle for Haditha."

When Ahmad's and Ramirez's destinies collide, the collateral damage will fall heavily on a large, extended family that lives in several interlocking houses on a ridge overlooking the main road through Haditha. A boy has recently been born, and the family has gathered, infants to great-grandparents, to celebrate his ritual circumcision. A beautiful young couple, Hiba (Yasmine Hanani) and Rashied (Duraid A. Ghaieb), sneak off for private liaisons, dreaming of escaping the small-town Muslim Puritanism of Haditha for life in Cairo, Egypt; Damascus, Syria; or the West. Some family members have noticed men burying a bomb by the roadside; they don't support the insurgents, especially, but they know better than to get involved in these things. Before the movie is over, most of them will be dead.

No doubt there will be complaints from various quarters about "Battle for Haditha." Some people may suggest that Broomfield is apologizing for the Marines' behavior by humanizing them, while others will say he is prejudging them unfairly. But his film is based on extensive research; he sticks closely to the known circumstances of the Haditha incident, and his inventions, such as the character of Ahmad, are entirely plausible. Cpl. Ramirez is a composite character; the principal Marine who faces murder charges for the Haditha killings is named Staff Sgt. Frank Wuterich. (Charges against various other enlisted men and officers have been dropped.)

With its documentary-style hand-held camerawork, clipped and oblique dialogue, and nervous-making death-metal soundtrack, "Battle for Haditha" builds tremendous tension with hardly any moments of exposition or self-conscious character building. When the violence starts, it seems terrible but impersonal, deadly without being climactic or cathartic, an inevitable and natural occurrence for these men in this place. As the Marines ritualistically tell one another, they're doing exactly what they trained for.

Broomfield allows Ramirez only one brief scene of emotional release, and frankly it's a scene that should have ended up on the cutting-room floor. He doesn't need it. If "Battle for Haditha" is the closest thing to "Paths of Glory" or "Full Metal Jacket" that the Iraq war has yet produced, it's because it doesn't try to explain anything, because it captures the schizophrenic body language, glazed-over expressions and motherfucker-laden, hip-hop-era slang of the men who've been there doing the killing in your name and mine. To prove that war is inhuman, and that it drags every human life it touches down into filth, we don't need to hear Cpl. Ramirez deliver a monologue into his shaving mirror. Losing his breakfast behind the Humvee is enough.

"Battle for Haditha" is now playing at Film Forum in New York, with national release to follow.