Is everything we know about American history wrong?

Forget the Pilgrims. America's roots are older and more twisted, what Tony Horwitz calls a "primordial slime of false starts and mutations." 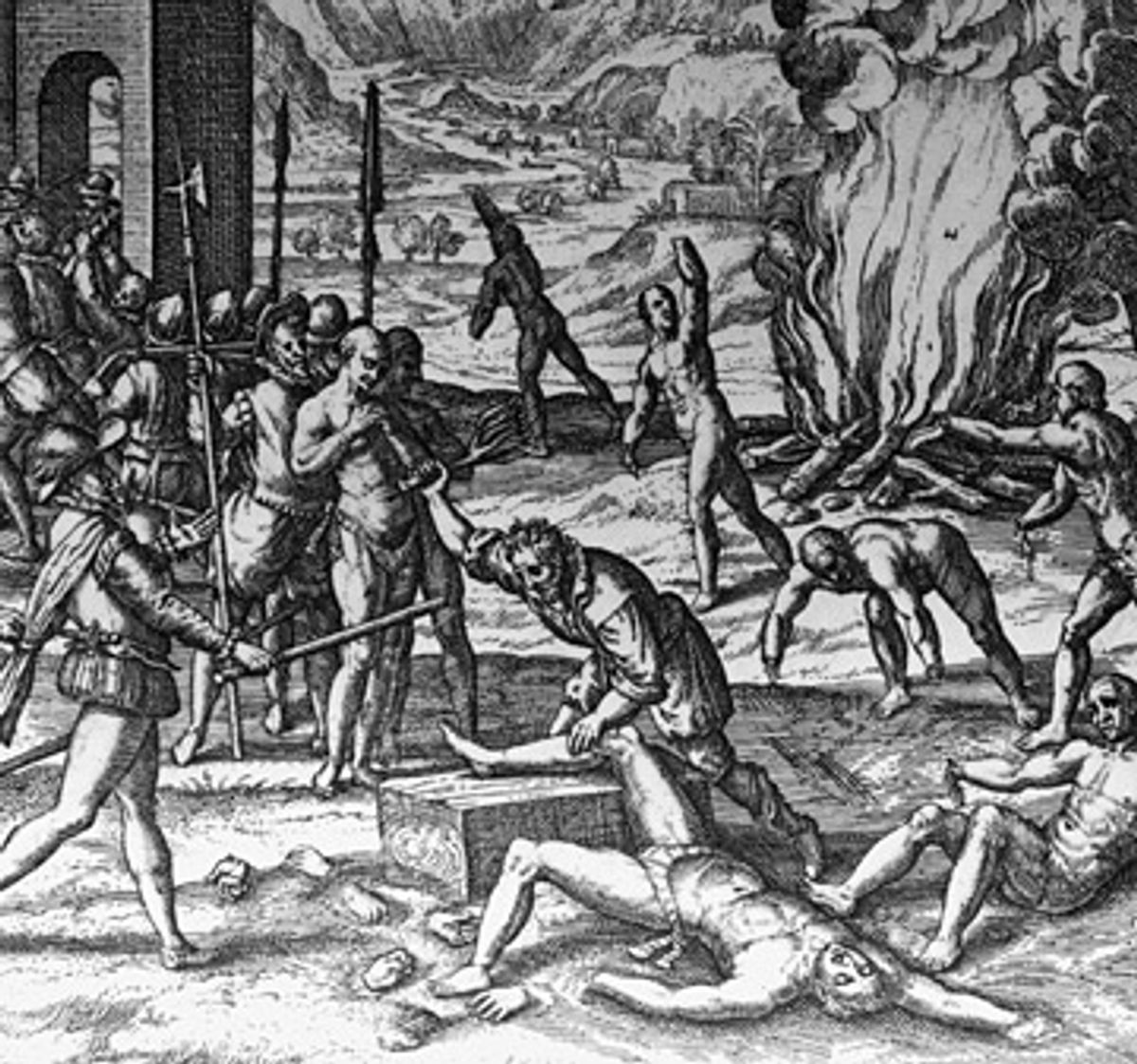 Just ask the Spanish conquistadors of the 16th century. Before attacking Indian settlements, they were required to read a summons called the Requerimiento, which spelled out the consequences of resistance: "I assure you that, with the help of God, I will attack you mightily. I will make war against you everywhere and in every way ... I will take your wives and children, and I will make them slaves ... I will take their property. I will do all the harm and damage to you that I can ... I declare that the deaths and injuries that occur as a result of this would be your fault and not His Majesty's, nor ours."

The Indians, of course, had no idea what was being shouted at them, and for the sake of expediency, Hernando De Soto never bothered with the Requerimiento. He preferred to loot the local maize supply, then impress available natives into service as porters and guides. Any natives who tried to escape were attacked by dogs or burned at the stake. In conquering the settlement of Mavila, De Soto's army succeeded in massacring between 2,500 and 3,000 Indians -- a single-day death toll that rivals Antietam.

The Indians at least had weapons. Spanish fleet commander Pedro Menéndez, after capturing two parties of unarmed French Huguenot settlers on the Florida coast, condemned hundreds of them to immediate death by stabbing. Among the few spared: those who converted on the spot to Catholicism and a few musicians "to play for dancing." The river where French blood ran still bears the name Matanzas, Spanish for "slaughters."

No, it's not pretty, this work of making empires. Nor is it a sure thing. Of all the American settlements launched by the lethally efficient Spanish in the 16th century, only St. Augustine, Fla., survived -- and barely. As journalist Tony Horwitz writes in his fascinating chronicle, "A Voyage Long and Strange: Rediscovering the New World," our nation's founding was "slow and messy: a primordial slime of false starts and mutations that evolved, over generations, into English colonies and the United States. Once on its feet, the newborn American nation looked back in search of origins, and located its heroes and sacred places on the stony shore of Massachusetts."

And thus a creation myth was born. Plymouth: where pious Pilgrims, by dint of their faith and labor, made a new nation.

And yet it takes only a little effort to see that the Puritans were walking in others' footprints. The first native to greet the Mayflower was an English-speaking Indian named Samoset, who asked for a beer. (He'd been introduced to the beverage by Britishers in Maine.) Shortly after came Squanto, who had learned the settlers' language the hard way: He'd been kidnapped by an earlier English expedition and sold into slavery. As for the coastal regions that seemed so ripe for the Pilgrims' taking, they had been conveniently emptied, thanks to a plague brought over by Europeans.

By the time the British secured a toehold in New England, other European nations had already explored 24 states -- penetrating as far inland as Kansas and Tennessee -- and had settled six. The Italian Verrazzano, who would later bequeath his name to a New York City bridge, had sailed the entire Eastern seaboard a full century before the Pilgrims even arrived. (We may be grateful that his name for Maine -- Land of Bad People -- never stuck.) Spanish conquistadors had, at great peril, rafted the Mississippi River, ventured into the Grand Canyon and climbed the Appalachians.

And yet you would be hard-pressed to find a modern-day American who knows any of this. Indeed, a better title for Horwitz's book might have been "The Corrections." All that stuff you learned in grade-school American history? Wrong.

Start with this. Ponce de Léon went to Florida to find not a fountain of youth but the same things that drew every Spanish invader: gold and slaves. (He found neither.) The first Protestant refuge in North America wasn't Plymouth but La Caroline, a fort built on the Florida coast in 1564 by the above-mentioned Huguenots. A year later, their slaughterer Menéndez held what was possibly America's first Thanksgiving dinner, well attended by local Indians.

On and on it goes: a hemorrhaging of certainty. The first European child born in North America? Not Virginia Dare but, more likely, a Viking boy named Snorri, born circa 1000 A.D. in what the Norse liked to call Vinland. The true founding father of New England? Not Bradford, not Standish, but John Smith, who gave the region its name and actively promoted its colonization.

And what about those flat-earthers who thought Columbus would tumble off the world's edge? You can blame that little fiction on Washington Irving. The Greeks had long ago figured out the world was round, and for more than 700 years, even the Catholic Church had accepted it. The only thing Spaniards were still debating in 1492 was the distance to Asia. In this, as in so many other matters, Columbus was mistaken.

Readers of Tony Horwitz's previous volumes, including "Blue Latitudes" and "Confederates in the Attic," know he likes to use history as a pretext for travel, the better to yoke past and present. The same pattern holds in "A Voyage Long and Strange," and it must be said that some of the author's excursions are more germane than others. There's fun to be had, yes, in watching him nearly combust in a Micmac sweat lodge, but it tells us next to nothing about Norse colonizers or the natives they encountered. It's even more fun to watch Horwitz go to the Dominican Republic and negotiate Santo Domingo, the New World's first city (where today the prevailing motto is "Estamos jodidos": "We're fucked"), but his experiences only reinforce what we already know about today's developing world.

Horwitz is on more fecund ground when he tries to duplicate the actual experience of the first colonizers -- clambering, for instance, into the 50 pounds of armor that one of De Soto's men would have had to drag through the Florida swamps or experiencing firsthand the wonders of the halberd: a combination hook, ax and bayonet that finished whatever business the Spanish musket and crossbow had begun.

Against his own better judgment, it seems, Horwitz keeps returning to those brutish Spaniards, ignoring the more pacific passages of La Salle, Champlain, Marquette and Joliet that were every bit as crucial to North America's future. From an entertainment standpoint, it's hard to blame him. The conquistadors may have been insane, but they were also insanely brave, "marching miles and miles," says one admirer, "with no idea who or what they'd meet." In pursuit of seven cities of gold, Coronado led his men across the Sonoran desert and mesa, then traveled 77 days across the Plains before returning to Mexico City. The journey of De Soto's army across the American Southeast, says one historian, was "a thousands-mile trek, right up there with the epic marches of military history ... Navy SEALs would be dropping with exhaustion after what these guys went through."

Of course, one of the things "these guys" carried out along the way was genocide. Their mission, as sublimated by Horwitz, was "gold and God, conquest and conversion." When Indian slaves petered out, they simply imported new ones. (The first African slaves arrived in Hispaniola in 1518.) Moral introspection was not the Spaniards' strength; neither was empiricism. Columbus was certain that Asia lay only 3,000 miles west of Spain -- about 8,000 miles short of the real distance -- and nothing he experienced could sway him. During his third voyage, he concluded he was "sailing up the breast of the world" to the nipple-extremity of the Garden of Eden. (In fact, it was Venezuela.) To his dying day, he believed he'd reached Asia. He changed the world, writes Horwitz, "not because he was right, but because he was so stubbornly wrong. Convinced the globe was small, he began the process of making it so, by bringing a new world into orbit of the old."

What distinguishes Horwitz's work from the usual anti-colonial tract is his reluctance to exchange one myth for another. Europeans may have trailed disease, violence and slavery in their wake, but the Indians they encountered were not the happy, dancing savages of New Age imaginings. The empire of the famous Powhatan (known to his people as Wahunsenacawh) extended from North Carolina to Maryland, and he ruled it with as tight a fist as George III's, exacting tribute from 15,000 subjects. Indian tribes were at constant war; fathers were even known to feed their baby daughters to dogs to keep them from being captured. It was "an impoverished and Hobbesian world," says Horwitz, "where all struggled against all for survival." A Spanish traveler found one tribe reduced to eating spiders, worms and deer dung.

America was an even crueler hostess to her European settlers. Half the Mayflower passengers perished within six months of landing. Of the 20,000-plus English who journeyed to Virginia during the colony's first decades, some three-quarters died, a mortality rate comparable to the Black Death at its height. Jamestown's most harrowing trial came in the long 1609 winter known as "the Starving Time": "When rations ran out, colonists ate horses, dogs, cats, rats, and mice. They ate shoes, cooked starch from their collars into 'a gluey porridge,' and devoured excrement. When nothing else remained, they ate one another ... Others disinterred corpses. The nadir was reached when a man killed his pregnant wife, 'chopped the Mother in pieces and salted her for his food.'"

The wonder, really, is that anybody survived at all. What separated England from its European counterparts, argues Horwitz, was not luck or planning but simply persistence. England, secure in its newly attained superpower status, could afford to send over wave after wave of colonists, giving its settlements the influx of human resources they needed to stave off extinction.

So what are we to do with the Anglophiliac bedtime stories we've been spoon-fed since childhood? "When the legend becomes fact," says the editor in John Ford's "The Man Who Shot Liberty Valance," "print the legend." Horwitz's suggestion is more radical: Let the legend and fact intertwine in a never-resolving dance.

The example of Amerigo Vespucci is instructive. A Sevillian pickle-dealer, he accompanied Spanish and Portuguese fleets to the Indies between 1499 and 1502 and embroidered his modest travels into flagrantly fictional accounts of places he'd never been. His stories feature big-bosomed native giantesses who use insect venom to make their husbands' penises swell and who freely offer sexual favors to every passing Christian. Vespucci was punished for his effrontery in this fashion: Two continents were named after him. Better than Columbus, Vespucci understood that the New World was not just a plot of earth but a state of mind.