Clinton and Obama on Al-Jazeera

The Arab network has followed the Democratic race closely. Inside its studios, I discover how Clinton's "obliterate Iran" comment played, and much more. 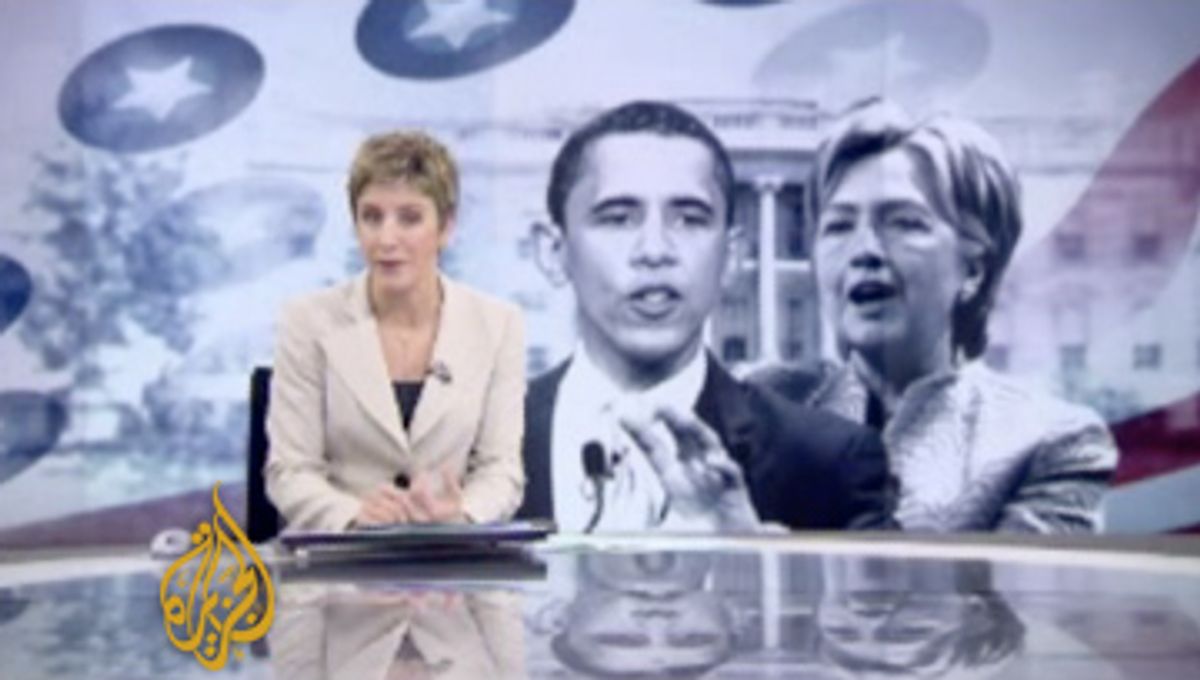 Last Wednesday morning, Al-Jazeera's Arabic service reported from Indianapolis on the split results of the North Carolina and Indiana primaries. For analysis, the anchor in Doha, Qatar, interviewed the network's Washington correspondent, Fady Mansour. "A state for each candidate, is that right?" she asked. Mansour replied that it might seem so from the outside, but in fact winning states was less important than winning delegates, and Barack Obama had bettered his lead over Clinton in that regard. He also said that behind the scenes the Clinton camp was seized with anxiety over whether their candidate's showing meant the end of the road.

Al-Jazeera's coverage of the primary focused on the facts and avoided editorializing, and its interpretation of the meaning of last Tuesday's events was squarely within the mainstream of U.S. political reporting. The only exceptional things about it were the language spoken by the on-air talent and the fact that a satellite channel based halfway around the world in a tiny Gulf emirate had the means and the interest to report from Indiana and Washington on the complexities of the U.S. primary system to Arabic-speaking viewers.

Many Americans incorrectly think of Al-Jazeera's Arabic-language network as al-Qaida Central because it occasionally broadcasts excerpts from videotapes of the terror organization's leaders. Nowadays, however, viewers are far more likely to see images of the American presidential candidates on the channel's screens. As the United States, always an interested party, has become a dominant on-the-ground player in the Middle East, residents of the region increasingly feel that their own fate depends on the outcome of this election. I was in Qatar earlier this month and stopped by the office of Ahmed Sheikh, editor in chief of Al-Jazeera's Arabic service, to ask him about his network's coverage of the campaign.

Al-Jazeera's Arabic service studios in the rapidly growing metropolis of Doha have been expanded but are still relatively modest. The facilities at the new English-language Al-Jazeera International across the street are far more state-of-the-art. The correspondent who welcomed me said that when Egyptian President Hosni Mubarak visited, he was taken aback by how small the studio was, remarking, "So this is the matchbox that has caused all that trouble!"

Safely delivered to Sheikh's office, I was plied with strong Arab tea. Soon our conversation turned to the U.S. presidential campaign. Why, I asked, give such distant events air time? "Because the United States is occupying Iraq and it is an ally of Israel and a power broker in the region," Sheikh replied. "The United States is the only superpower on the planet. Events in Iraq and Palestine affect this area."

He revealed that the station would be preparing 40 more stories between now and November covering the American elections. "We are interested in the Arab-American vote, but also in the black and Hispanic votes. Arab-Americans may be trending Democratic, largely because of the Iraq situation." (When I later spoke to Gaven Morris, the Australian head of planning at Al-Jazeera International, he said his service had not been covering the primaries intensively, but would ramp up coverage closer to the general election for its audiences in Asia, Africa and Latin America. I had the impression that the Arabic channel was more interested in the primary season.)

How did Sheikh view Democratic candidate Hillary Clinton's remark about the United States being able to "totally obliterate" Iran? "It will not be a picnic for the U.S. to attack Iran. That would push oil to $300 a barrel, with severe consequences. And Iran would find ways of retaliating." Interestingly, he made allowances, observing, "Hillary Clinton is in an election campaign. I would give her the benefit of the doubt."

What about presumptive Republican nominee John McCain's repeated gaffes in misrepresenting al-Qaida as a Shiite organization when it is actually made up of radical Sunnis? "Those people in Washington, D.C., do not do their homework," Sheikh lamented. "The U.S. 'empire,'" he said, making scare quotes with his fingers, "is not behaving rationally. It is not capable of taking the right decisions at the right time from the point of view of the rest of the world."

Sheikh did not see Iran as a burgeoning enemy, the way it is depicted in the United States and in some quarters of the Arab world, such as Saudi Arabia. He suggested taking a wider view. "Most people in Algeria and Morocco do not see Iran as an enemy but do not want Iran to dominate Iraq."

"Salafis are the ones who worry about an Iranian Shiite threat," he explained. Salafis are revivalist, fundamentalist Sunnis. Ironically, Al-Jazeera has often been accused of favoring the Salafis, and that is its reputation in Iraq -- where its offices have been closed since 2004. Sheikh gave no evidence of such a bias against Shiites. He expressed admiration for the deft way Iran had handled its crisis with the West. He seemed to be responding to the Bush administration's hopes for an alliance of Israel and the Arab states against Iran when he said, "The common enemy in the Arab collective mind is Israel as long as it doesn't reach peace with the Palestinians."

Have any of the American presidential candidates agreed to give Al-Jazeera an interview? Sheikh smiled. "We would be interested, but I believe they would not agree, especially John McCain." Is that reticence because of the station's perceived links to Muslim radicalism? "We do not support al-Qaida's policies. Al-Jazeera tries to cover all sides in the U.S. conflict with al-Qaida. It attempts to balance stories by giving both points of view." He said that the channel gives the United States 10 times as much coverage as it gives radical Muslim movements, and noted that it carries live White House, Pentagon and other news conferences. It has interviewed many U.S. officials, including, recently, Adm. Michael Mullen, the chairman of the Joint Chiefs of Staff.

Sheikh insisted that the channel was just doing good news gathering by airing portions of al-Qaida tapes. "Al-Jazeera edits a one-hour al-Qaida tape down to four minutes, and we put on the air what we think is newsworthy." He pointed out that some al-Qaida communiqués have made threats on which the terror organization followed through. "They don't just cry wolf."

The Bush administration's hatred of Al-Jazeera is legendary, and leaked information from the British government suggests that Bush even considered bombing its offices in Doha. Al-Jazeera offices in Kabul and Baghdad were bombed by the United States, even though the station says it provided Washington with its coordinates. Correspondent Tarek Ayoub was killed in the Baghdad bombing, and he is clearly viewed in the studio as a martyr to journalistic freedom in the face of brutal U.S. tactics. While I was there, the report came that the United States had released Sami al-Haj, a Sudanese who had been working for Al-Jazeera for only one month when the Pakistani military arrested him at the Afghanistan border. He was sent to Guantánamo and alleges he was tortured and repeatedly asked about Al-Jazeera's administration and structure. The news room went wild with joy at the news of his release.

The country where Al-Jazeera is based is relatively pro-American. It is a tiny but very wealthy place, with 15 percent of the world's proven gas reserves, and Qatar's citizens are well aware of how precarious their position is. One Qatari recalled to me how he woke up on Aug. 2, 1990, to find that Kuwait, another small Gulf country, had just vanished as a result of its annexation by Saddam Hussein. Qataris clearly fear that without the right alliances, they could also be gobbled up one day.

Despite its insecurities, Qatar, perhaps the world's richest country per capita, is emerging as a powerful, polyglot city-state that is as much Indian Ocean as Arab, as much Hindu, Buddhist and Christian as Muslim. It now has a population of more than a million, but Qatari natives are a small minority. Some 90 percent of its residents are guest workers. Twenty percent are from other Arab countries, and 20 percent are from India. Iranians, Filipinos, Nepalis and Pakistanis all make up about 10 percent each. Although the 2004 census suggested that about 30 percent of the population was non-Muslim, the country is attracting so many immigrants so fast that I suspect the proportion is now far higher.

The man who pays the network's bills is definitely pro-American. Al-Jazeera is subsidized by the emir of Qatar, Sheikh Hamad Al-Thani, who has taken his country into a firm military alliance, and a secret defense pact, with the United States. The United States maintains a military base at al-Udeid, west of the capital. Former CIA director George Tenet asserted in his memoirs that Sheikh Hamad had provided information used in the capture of top al-Qaida operatives Abu Zubaida and Khalid Sheik Mohammed in Pakistan. Qatar has hosted Israeli President Shimon Peres and, despite its sympathies with the Palestinians, has fair relations with Israel.

One might think an easy answer to the question of why Al-Jazeera has planned so many stories on the U.S. presidential race is that, with the base at al-Udeid, it is in some ways yet another 51st state. But the Qataris I talked to are far more pro-American than the station, which is dominated by expatriate Levantine intellectuals, like Sheikh, who is Palestinian. Within the globalized, cosmopolitan milieu of Qatar, the Arabic service of Al-Jazeera is an island of pan-Arab nationalism. In fact, Al-Jazeera Arabic tends to be more reflective of the typical concerns of the larger Arab world, the issues that matter to Egyptians, Jordanians, Palestinians and Lebanese: the Israeli-Palestinian conflict and the U.S. occupation of Iraq. The Arab world has been deeply shaped by American policies and interventions, and the Arab public expects the next U.S. leader to be consequential for them. In the age of the sole superpower, the American president is in some ways president of the world. Ahmed Sheikh and other Arab observers are asking whether the next one will bother to do his or her homework this time.