Hillary Clinton will likely win big here Tuesday. But could the primary vote in this former Democratic bastion be a clue to Obama's performance in November? 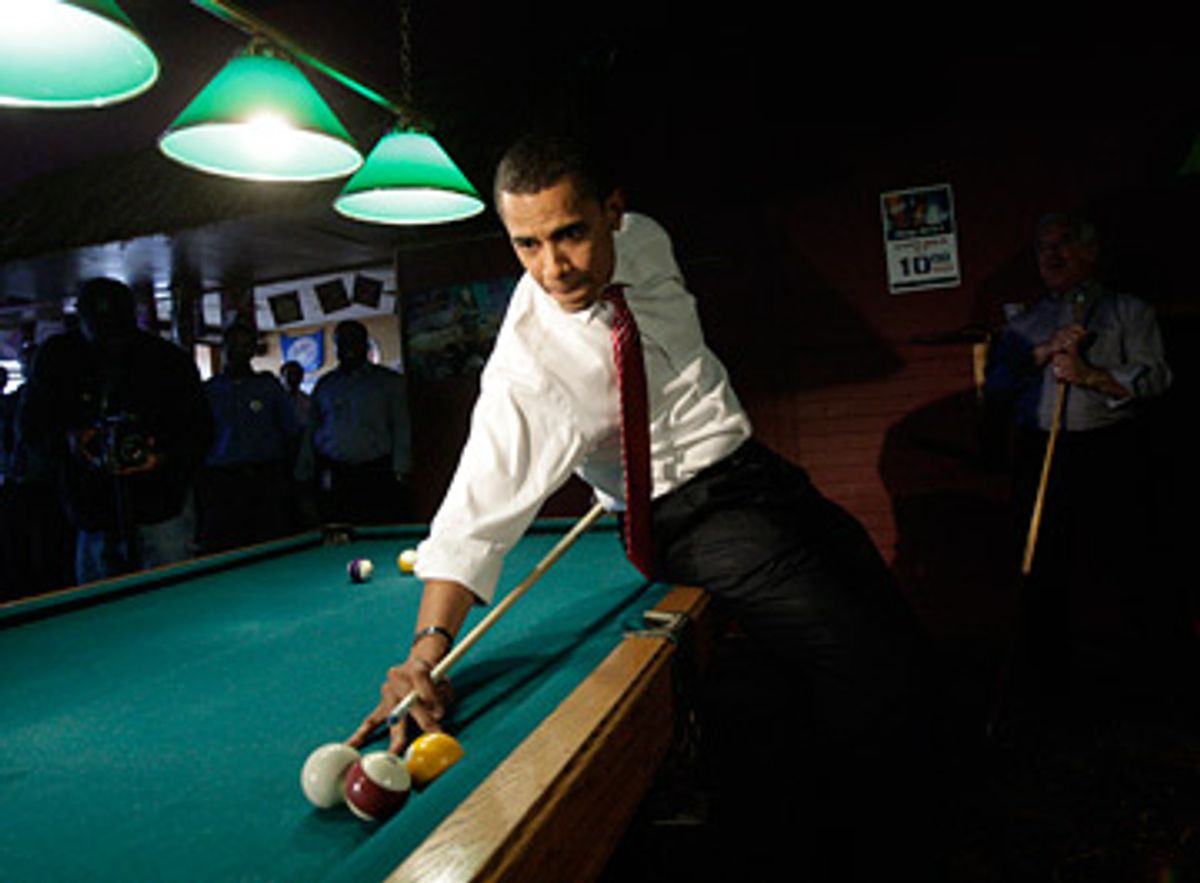 The day before the West Virginia primary, Barack Obama finally got around to making just his third visit to the state as a presidential candidate (if not his third visit to the state, period). He stuck around for less than half a day, giving a speech that made it clear that he, for one, has already moved on to the general election. On his way out of town, he stopped for the now-obligatory visit to a local bar, where he shot some pool and cheerfully admitted he expects to lose in a landslide to Hillary Clinton on Tuesday. Polls have her up by 30 or 40 points; the only question is whether turnout is massive enough to help her cut deeply into his national lead in the popular vote.

But the way Obama gives up on a state bears only a vague resemblance to the way Clinton conceded a few dozen to him back in February (a decision that helped put her in a delegate hole that West Virginia won't really help dig her out of). His campaign has field offices in 11 towns, plus a headquarters in the capital, and the backing of three statewide elected politicians, one of whom spent Monday barnstorming the state by helicopter to fire up Obama voters. An ad featuring Obama's biography was in heavy rotation on local cable stations. If Clinton had put that much effort into places like North Dakota, Kansas and Louisiana a few months ago, winning West Virginia might actually be significant for her.

As it is, Tuesday's election might prove to be more important as a bellwether for November than as a prize in the fight for the Democratic nomination. If Obama wins less than 40 percent of the vote in the primary, does he have a chance at beating John McCain here in the fall? By voter registration statistics, the state is one of the most reliably Democratic places in the nation. But West Virginia gave its five electoral votes to George Bush in both 2000 and 2004, and strategists are already wondering if it's heading back to the GOP this year.

Not that the GOP would be able to take much of the credit if it does. "Democrats who lose West Virginia don't do so due to Republican voters," said Curtis Wilkerson, a Democratic strategist based in Charleston. "They do so due to their own Democratic voters." Once upon a time, Michael Dukakis could carry West Virginia by five points, one of only 10 states he won in 1988. And Bill Clinton won the state twice. But cultural issues -- "God, guns and abortion," as Charleston's Republican Mayor Danny Jones put it Monday morning on local talk radio host Hoppy Kercheval's show -- finally moved West Virginia toward the red column in presidential elections, dooming Al Gore and John Kerry here. Now Democratic Party chairman Nick Casey isn't even sure the state is up for grabs in the fall. "We were a swing state, and we swung the wrong way the last two elections," Casey, who hasn't endorsed either candidate, said in an interview. "We got bamboozled, fooled, lied to -- whatever the word is -- by the inside-the-Beltway Republican Karl Rove machine. ... I don't know if people are considering us a swing state or not anymore."

For now, at least, Obama is doing all the right things to keep Democratic powerbrokers satisfied that he'll be fighting for the state in a few months. "The Obama folks have a definite interest in doing as well as they can," said Casey, who added that Obama has a "very good, very attractive" operation here. "They're not just here to say we showed up." Sen. Jay Rockefeller, who endorsed Obama in late February, gave an introductory speech Monday that could double as a brief for sainthood. "When I came out for Barack Obama, I felt liberated," Rockefeller said. "Finally, at last in this country -- beset by problems, with the world looking on us as they do -- we have somebody named Barack Obama, who has risen up the hard way and who's going to be our president."

Obama didn't seem too worried about the prospect of a blowout Tuesday. "There is an election here tomorrow," he admitted in his speech. "I'm honored that some of you will support me, and I understand that many more here in West Virginia will probably support Senator Clinton." That drew boos and cries of "No!" from the loyal Obama backers in the audience (which may have been a measurable percentage of his total vote in the primary). At Schultzie's Billiards, in South Charleston, Obama told reporters he wasn't surprised Clinton had "put more emphasis" on West Virginia than he had, but "at the end of the day, I am confident we're going to be able to unify the party."

The problem for Obama is that if any state is tailor-made for registered Democrats to abandon the ticket in droves if he's on it, it may be West Virginia. The state's population is older, whiter, poorer and worse educated than most of the rest of the nation -- all demographics that have flocked to Clinton in primaries so far. This may be the state where one of the Clinton campaign's arguments about electability -- if you don't win the state in the primary, you can't win it in the general election -- comes closest to being true. West Virginia casts a bigger shadow in Democratic history than it should based on its size; John F. Kennedy's win here in the 1960 primary helped prove a Catholic could win the presidency. But candidates either connect with voters here or they don't, and right now, Obama isn't.

At a Clinton campaign rally Sunday night in Eleanor, only 30 miles down the road from Charleston (motto posted on the main drag: "The Cleanest Town in West Virginia"), the Secret Service held on to pocketknives for voters so they could give them back once the candidate left -- not exactly the norm at Obama's rallies anywhere. Even for Clinton fans this late in the game, the crowd was fairly hostile to Obama. R.K. and Peggy Horton, both 71, said they'd never voted for a Republican for president in their lives. But if Obama wins, they will, and they think a lot of their neighbors will, too.

Obama rubs the Hortons the wrong way because they think he's arrogant. It's the same thing you hear from voters in a lot of the parts of the country where Obama's infamous remarks about bitterness would probably also apply. But that's not his only problem in rural West Virginia. "They won't go for a black man, that's just it," R.K. Horton, a retired heating and air conditioning business owner, said of his neighbors. "I don't think it's being racist necessarily, they just don't like black people that well." For that matter, it's not just his neighbors. "The arrogance and all that bothers me more than black, but black is a close second," he said. "Our generation was back when blacks were the back of the bus, and it's hard to change that outlook. I just feel like I couldn't vote for him."

That legacy is, sadly, yet another part of what Obama will be fighting against in the fall, even if he can overcome the broader cultural issues that tripped up Gore and Kerry. In places like West Virginia, race may complicate matters even more. "This will be the first election that many West Virginians will ever have the opportunity to vote for an African American," Wilkerson said. In fact, many of them had the chance to vote for Jesse Jackson in May 1988, but with Dukakis already the Democratic candidate in all but name, only 14 percent took it. Polls show more of them will take the opportunity this time, but still only one in three, even though this time it's the black candidate who's the presumptive nominee.

The odds are, overwhelmingly, that West Virginians will have another chance in November. Since Woodrow Wilson, every Democratic president has won West Virginia on his way to the White House. But Obama may need to find his electoral votes somewhere else if he's going to wind up there, too.