She's still in it to win it

Despite nearly impossible odds, Hillary Clinton pressed her case for the nomination with a victory speech in West Virginia. But the election still put her one step closer to ceding defeat. 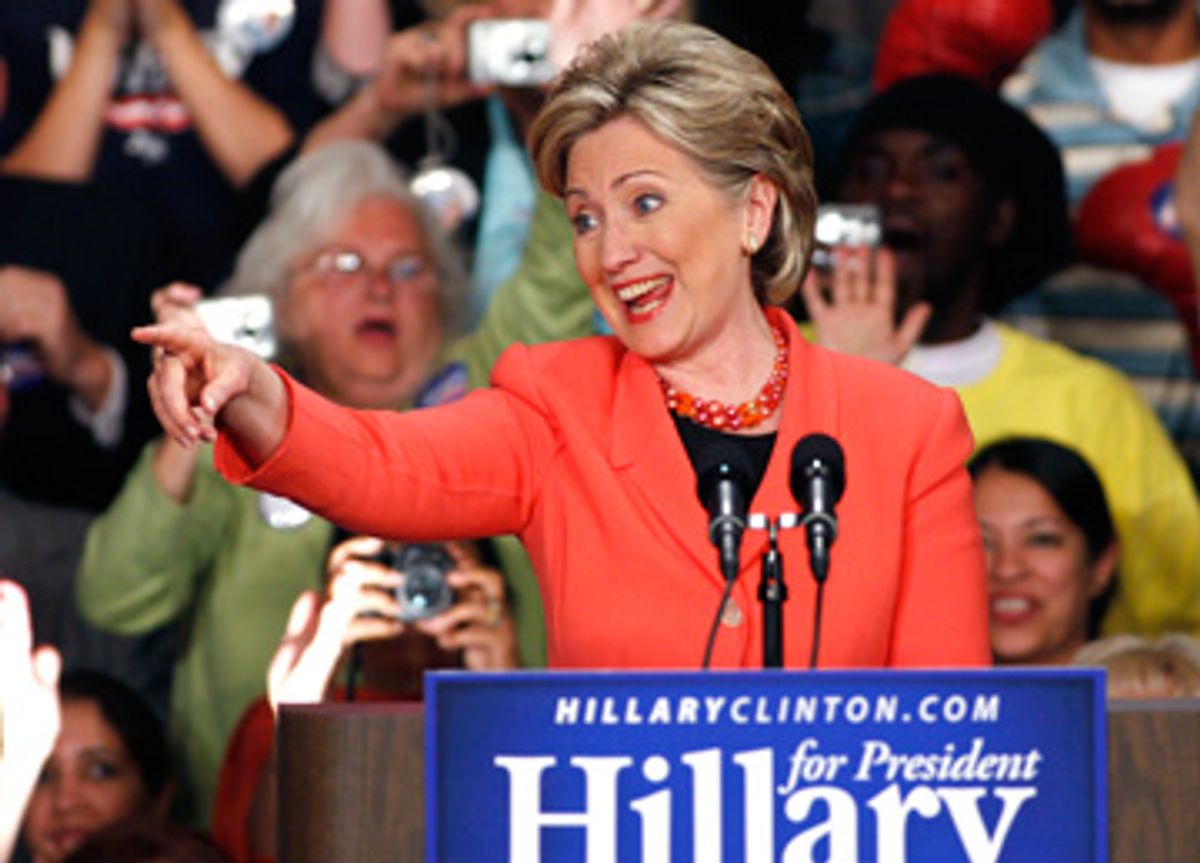 In modern campaigns, the real audience for most speeches is the one watching around the country on their TV sets, not the crowd actually listening in person at the venue. Yet, the speech Hillary Clinton delivered Tuesday night, after her landslide win in West Virginia's primary, stood out for how specifically it was aimed. Her remarks targeted a certain 200 or so people watching somewhere out there.

"In light of our overwhelming victory here in West Virginia, I want to send a message to everyone still making up their mind," Clinton said, speaking directly to the rapidly dwindling number of uncommitted Democratic superdelegates -- the only people in the United States who still have the power (if, almost certainly, not the inclination) to make her the party's nominee for president instead of Barack Obama. "I am in this race because I believe I am the strongest candidate to lead our party in November of 2008, and the strongest president to lead our nation starting in January of 2009. I can win this nomination, if you decide I should. And I can lead this party to victory in the general election, if you lead me to victory now. The choice falls to all of you, and I don't envy you."

So much for the speculation about which exit strategy Clinton would choose to gracefully leave the race. Instead of kneeling down and letting the clock run out, Clinton threw a "Hail Mary" pass to the party leaders watching on the sidelines. "The bottom line is this," she said. "The White House is won in the swing states, and I am winning the swing states." Winning West Virginia by about a 2-1 margin apparently convinced her to keep campaigning, even though the state's demographics more or less preordained the outcome, and it only carries five electoral votes in the general election. (A candidate needs 270 to win the White House.) "I am more determined than ever to carry on this campaign until everyone has had a chance to make their voices heard."

Clinton dropped some of her recent, explicit arguments against Obama, but the one she made implicitly -- that he's less electable than she is -- isn't likely to change the cold, hard truth of the numbers. Bill Clinton said last week that Hillary needed to win 80 percent of the vote with a turnout of 600,000 -- which would have surpassed even the wildest dreams of Democratic strategists here -- to "make the earth move" and change the dynamics of the race. Tuesday's win was an overwhelming one, yes, but not of the seismic-force variety. And considering that Obama has picked up more than two dozen superdelegates since last week's elections, including four on Tuesday alone, he's rapidly moving closer to claiming the nomination.

But the margin here made it seem as if Clinton would have won West Virginia even if she'd dropped out of the race last week, which surely would have embarrassed Obama more than a lopsided loss to a candidate still actively competing. (John Edwards -- who quit in January, but remained on the ballot here -- drew about 7 percent of the votes.) Network exit polls pointed to some data that could be problematic in West Virginia for Obama come November. Clinton won every demographic except the small handful of voters with post-college degrees -- there, they tied, 49 to 49. Obama even lost among people who say they have no religion -- surely a crowd that would be ready to resist the notion that he's an elitist who's out of touch with the state's conservative, rural values. If he's going to have a chance to compete with John McCain here in November, Clinton may have to make good on her promise, in her speech tonight, to come back to campaign in the fall -- just not on her own behalf. "If she's willing to come back to tell her West Virginia base, 'Listen, you love me, and I love him, go ahead and vote for him,'" Obama can make it a race here, said Curtis Wilkerson, a Charleston-based Democratic strategist.

Voters here do seem to love her. Clinton's final West Virginia campaign stop Monday night, at an "old-fashioned Democratic rally" sponsored by Gov. Joe Manchin in Fairmont, had been about as good a sendoff as any candidate looking at a short-term victory before an eventual defeat could ask for. She capped an evening of speakers, appearing onstage just after Manchin had fired up the crowd (which had already sat through most of the other statewide Democratic candidates) and leisurely stretching her stump speech to nearly 45 minutes. "There were some folks who didn't want us to keep going until we got to West Virginia," she said. "They wanted to say West Virginia doesn't matter. I don't think they understand West Virginia or politics, because West Virginia really matters when it comes to making the decisions that affect our country."

That hasn't really been the case lately -- as Clinton also pointed out, the last time West Virginia played a central role in a Democratic primary was 48 years ago, when John F. Kennedy overcame deep skepticism about his Catholicism to win here. But it went over well, of course, with the overwhelmingly pro-Clinton crowd. (Apparently there were a few Obama supporters in the room, but they were so outnumbered that a Clinton volunteer had to point them out to the press corps afterward.)

Once the speech ended, Clinton spent another 45 minutes working a rope line near the stage, as adoring fans pressed themselves up against the velvet barriers (and Secret Service agents) and passed books, campaign buttons, T-shirts, scraps of paper -- whatever they had handy -- to aides for her to sign. A troop of Girl Scouts gave her a patch, embroidered with the White House and "Madame President," which they said was part of a project they were working on (presumably to elect women to high office). "When I was a Girl Scout, we never had a patch like that," Clinton told them. Three Penn State University students had her sign a photo -- taken before the Pennsylvania primary of them posing with her there -- and then enlisted her to take a sequel. (It wasn't a bad metaphor for the campaign's endless endgame.)

But no matter how valiantly she posed for pictures or how many hugs she gave, it felt valedictory, and resigned, especially compared to her speech just minutes before. By this point in the campaign, with the race now over in 45 states, Clinton had saved her passion for the superdelegates. But even she seems to sense that it's probably too late. She had no "I'll keep fighting" or "we can do it" in her when voters in the crowd gushed about her campaign. Some of her most loyal supporters had to settle for a simple "thank you," an autograph and a smile.