"Blindness" is an apocalyptic horror flick, rendered dull and pretentious. But an astonishing animated war film and a gripping prison drama provide the fireworks. 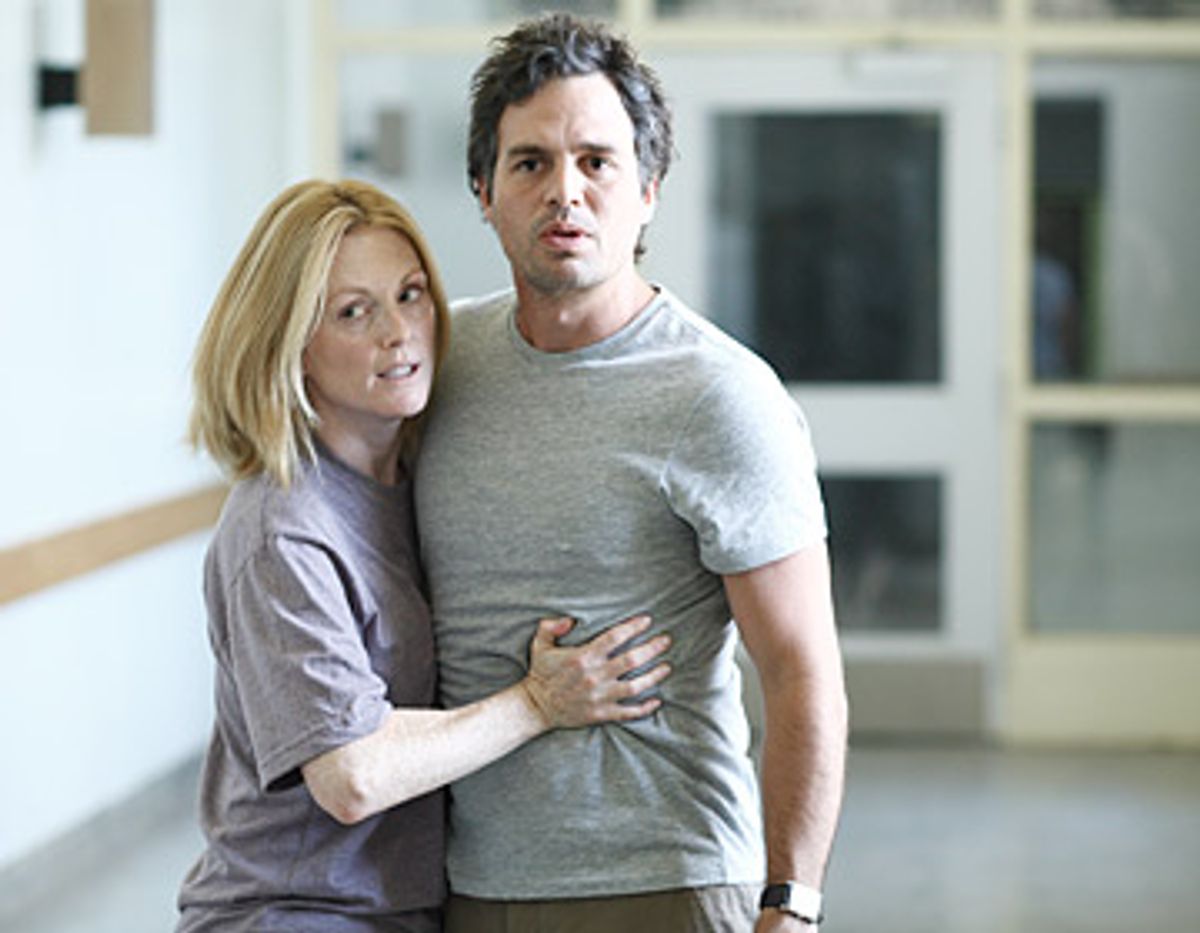 CANNES, France -- Is it really too late to call Carrie Bradshaw? Opening night at the 61st <a href="Festival de Cannes needed her badly.

There was a woman a few rows behind me who clapped long and loud after the press screening of "Blindness" concluded here on Wednesday afternoon. One can only admire her bravery, but she was very lonely. Maybe her favorite cousin was the production designer. Maybe she hadn't traveled for 16 hours in an array of subway trains, airplanes, buses and taxicabs to get here just before the movie started, the way I had. If my own foul and sweaty mood -- and my almost irresistible desire to sleep through the middle portion of Fernando Meirelles' earnest and dreary film version of José Saramago's 1995 novel -- were directly attributable to jet lag, the general tenor of the room was unmistakable. The 2008 Cannes kickoff was a dog.

Things improved dramatically and almost immediately, with the next two competition films. After witnessing Meirelles, Julianne Moore, Mark Ruffalo and Danny Glover ascend the carpeted steps of the Grand Théâtre Lumière for their gala premiere, the press adjourned next door to watch Ari Folman's devastating, dreamlike "Waltz With Bashir." If any of us were wondering why an unknown Israeli director's animated quasi-documentary about a largely forgotten war was scheduled so prominently, we're not wondering now. On Thursday morning, Argentine director Pablo Trapero's absorbing, emotional prison drama "Lion's Den," built around the marvelous actress Martina Gusman, provided Cannes with its first legitimate Palme d'Or contender.

So the good news is that the overcaffeinated, collectively sleep-deprived community that is Cannes will quickly consign "Blindness" to the memory hole. It's not a bad film in any risible or outrageous way; Meirelles is a careful craftsman who can create memorable images, and Julianne Moore gives a performance of great tenderness, strength and vulnerability in the leading role. But Saramago's allegorical novel about a mysterious epidemic of blindness that paralyzes a major city -- and perhaps all of human society -- just wasn't meant for the movies.

Saramago's book is a complex social fable or parable, which on one level channels the literary tradition of Kafka and Borges and on another refers to various 20th century horrors, from the concentration camps to the AIDS epidemic to the universal tendency of human government to default to tyranny, lies and brutality. It's all modulated by the author's erudite, sympathetic, lyrical and tragically inclined narrative intelligence, the true central character in all the Portuguese Nobel laureate's work.

What Meirelles and screenwriter Don McKellar have wrestled out of this is a mannered, unwieldy, art-house version of a standard-issue post-apocalypse film. It's basically "24 Days Later," with less violence, longer takes, washed-out colors and awkward passages of voiceover narration (read by Glover) that try to provide a depth and perspective the on-screen images and dialogue can't manage on their own. Here are the film's first words: "I don't think we went blind. I think we were always blind." Whenever the on-screen action slows down -- slows down more, that is -- Glover natters on in a similar pseudo-profound vein, turning snatches of Saramago's prose into New Age nostrums.

Moore plays the wife of an ophthalmologist (Ruffalo), who is the first doctor to notice the fast-spreading epidemic and becomes one of its early victims. For unknown reasons, she retains her sight even as the world around her goes blind, one person at a time. She feigns blindness to follow her husband into an abandoned, decrepit hospital used to quarantine the "infected," which begins as a barely habitable prison and rapidly descends into atavistic, "Lord of the Flies"-style chaos. Gael García Bernal plays the vicious self-appointed monarch of the place, who controls the food supply and uses it to extort valuables and sexual favors for himself and his cadre of followers. The scene in which female characters played by Moore, Alice Braga, Yoshino Kimura and others offer themselves to Bernal's men so their cellblock can eat is memorably hellish, but I'm not sure the film gives you sufficient reason to endure it.

One of the problems Meirelles never solves is the film's uneasy balance between realistic and allegorical modes. I haven't mentioned any of the characters' names because they don't have names, and the city and nation where this is happening are never identified. (As some of the supporting actors' accents suggest, the film was mostly made in Canada.) In Saramago's book, this has the effect of displacing us from the normative, naturalistic narrative mode: The story takes place outside social, political and scientific history, so questions about exactly why and how it's happening fade away.

But film is inherently a literal-minded medium, and this one is set in a recognizably modern metropolis of cars, apartment buildings and shopping centers. As "Blindness" bogs down between claustrophobic unpleasantness and symbolic dullness about halfway through, the viewer will quite reasonably start wondering things. Is the "white sickness" -- so called because the sufferer's field of vision becomes an amorphous, milky-white blur -- physiological or psychological? How is the media reporting on all this? Couldn't all the technology used to help the existing blind population be used to maintain some semblance of a functioning society? Wouldn't New York governor David Paterson, for instance, automatically become a world leader?

Of course these are the wrong questions. Saramago's "Blindness" isn't about blindness. It's about human beings in extremis, the terrible and noble things they will do to survive, the way the weak will crumple before the strong until they finally realize that by joining together they can resist them. Meirelles' film labors mightily to be about those things too, and "Blindness" finds some minor measure of redemption in its later scenes, when Moore, Ruffalo, Braga and Glover's characters, along with a few others, begin life anew as a reconstructed family. But it's all too true that many horror movies have addressed the same ideas in cleaner, more ruthless and vastly more entertaining fashion, and without repeatedly dropping the camera in a fishtank full of milk.

More quickly, Folman's "Waltz With Bashir" is a remarkable, haunting and intense work, quite unlike any animated film I've ever seen. Hand drawn in a crude, colorful underground-comics style, it captures Folman's struggle to recapture his lost memories of what he saw and what he did during Israel's ill-fated 1980s war in Lebanon, when he was a young draftee. Folman says that for many years he had no clear memories of his time in Lebanon, although he knew he had seen combat and that he had witnessed the Sabra and Shatila massacres of September 1982, when pro-Israeli Lebanese Christian militiamen carried out a near-genocidal campaign of murder in two Palestinian refugee camps.

While trying to work his way out of a severe depression, Folman contacted many of his former military comrades, along with a psychiatrist friend and a neurologist who specializes in memory impairment. The film combines pieces of these interviews with fragmentary episodes drawn from these men's memories, dreams and perhaps fantasies, all of them (until the utterly devastating last scenes) delivered in the same animation style. At least in part, the subject of "Waltz With Bashir" -- the title refers to Lebanese president-elect Bashir Gemayel, whose assassination inflamed Lebanese Christians to widespread anti-Muslim violence -- is the unreliable and fantastic quality of memory itself. One friend's dream about being pursued by a pack of wild dogs seems just as real or unreal as another's eerie memory of a firefight in a remote orchard against a shadowy opponent -- a boy of 11 or 12, who blows up an Israeli tank with an RPG before being killed himself. (Folman was involved in this battle, but apparently still cannot remember it.)

Oddly, the adventure-comics presentation of Folman's memory excavation lends it less rather than more power. (As he has said, the alternative was to shoot a bunch of middle-aged men talking.) His resurrected war stories really are exciting adventures, but also terrible, nightmarish and finally pointless ones. Dredging up these dreadful memories may have been therapeutic for the men involved, but the point of "Waltz With Bashir" is bigger than that. It's a provocative, strange and arresting film, whose unusual blend of style and substance should reach a large worldwide audience.

Julia (Martina Gusman), the protagonist of Trapero's "Lion's Den" ("Leonera," in Spanish) has memory problems too. She wakes up one morning in her Buenos Aires apartment, where she has evidently fallen asleep in her clothes and her makeup. The place is utterly trashed, and she's bruised and battered. She's got blood on her hands, her face and her pillow. She gets up, takes a shower and goes to work as usual. Only later in the day does it occur to her that something is wrong, and it's not until she gets home that she notices the two naked men on the floor: One of them (her boyfriend) is critically injured, and the other (his boyfriend) is dead.

That's Trapero's method in a nutshell: He's a tremendously skilled director, alive to every moment and capable of evoking nuanced emotional states, but he maintains a certain distance from his characters. (He also made the delightful family comedy "Rolling Family," which can almost be described as "Little Miss Sunshine" with less schmaltz.) We never learn much of anything about Julia's psychological history or her troubled family background, but we know right away that she's the kind of perpetually trashed, dyed-blond, Courtney Love-esque head case who won't even notice the dead guy in her apartment. When she's taken into custody and ordered to strip to her underwear by prison guards, we learn something else: Julia's pregnant, and at least five to six months along.

"Lion's Den" is a movie about a woman who gives birth in prison, and has to begin her new life of motherhood in a special cell block reserved for women with young children. But I know what you're thinking, and it isn't that kind of movie. Yes, this policy of keeping little kids in unbelievably squalid prisons is apparently a noteworthy social issue in Argentina, but Trapero isn't delivering a docudrama or a lecture-demonstration. He never moralizes or renders verdicts, and while Julia certainly becomes more adult and more resolute as a result of imprisonment and motherhood, there's no canned morality or easy redemption on offer here.

Gusman (Trapero's wife in real life) gives a vivid, ferocious, almost animalistic performance. Since there's virtually no back story to address Julia's guilt or innocence, or anything else about her earlier life, she carries the entire burden of drawing audience compassion to this clearly screwed-up, unmanageable person. Furthermore, I can only assume she was really pregnant for the opening scenes, because that's no special effect.

"Lion's Den" is marvelously shot and acted, constantly surprising, and completely focused on Julia's struggle to get from one moment, or one day, to the next one rather than through some formulaic story arc. It isn't a thriller; Julia genuinely has no idea whether she killed her boyfriend's lover or not, and we never get that tell-all flashback scene that explains everything. It isn't really a story about Julia's reconciliation with her estranged mother (Elli Medeiros), or about the sometimes violent, sometimes supportive community of prison motherhood, or about contextual lesbianism -- Julia eventually yields to the loving attentions of a nurturing fellow prisoner (Laura García) -- or about class and color in Argentine society. It has all those things in it, but none of them can contain it or control it. It's a terrifically engaging story about a woman who is damaged, angry, beautiful and indomitable, who loves her son and who remains a mystery to us, and to herself, right to the end.