The coal industry has turned up the heat on its ad campaign and apparently McCain, Clinton and Obama are buying. 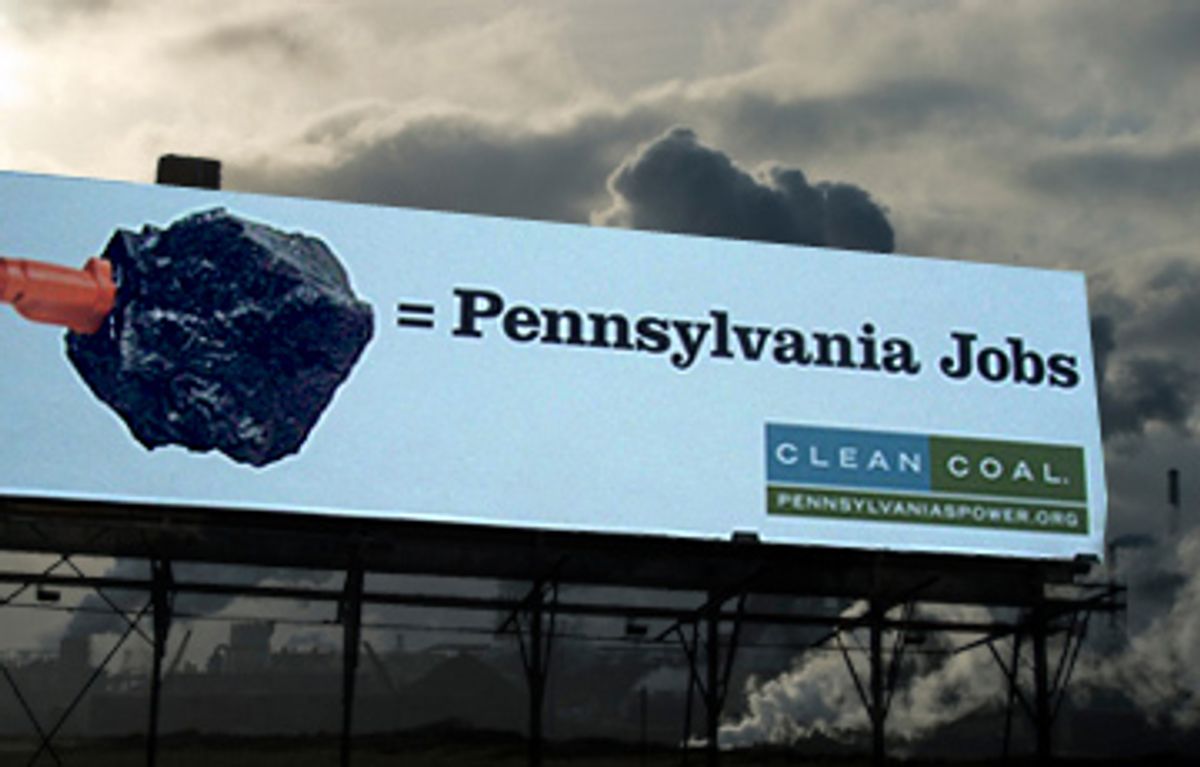 In one TV commercial, Kool and the Gang warble their celebration of good times because coal, yes, coal, makes the party possible in America. In another, white and black, young and old, male and female, and even someone in a doctor's green scrubs, stare into the camera and soulfully declare: "I believe" American know-how will make coal clean and stop it from contributing to climate change. Not sold? Maybe you missed the newspaper ads and billboards warning that turning away from coal could mean blackouts, unemployment and higher electric bills.

These messages and other variations on the coal-is-great theme are flooding the nation courtesy of the coal industry, coal-fueled utilities, railroads and related industries. The pro-coal marketing campaign -- known by its tag line "Clean Coal" -- has kicked into high gear as prospects for new plants have turned bleak. Wall Street is tightening financing, leading to what one analyst told the Christian Science Monitor is a "de facto moratorium on coal power." The expected election of a more environmentally friendly president may lead to the first federal limits on carbon dioxide emissions. Even red states like Kansas are now battling the construction of coal-fired plants. Last year, 59 new plants were either canceled or halted across the nation.

When it comes to the threat of global warming, "the coal industry are the last people to get it," says Daniel J. Weiss, senior fellow and director of climate strategy at the Center for American Progress, a nonprofit, progressive think tank. "That's why they're fighting so hard. They're on a death spiral right now."

The coal industry's woes have risen as worries over climate change have increased. Today's coal-fired plants emit copious amounts of carbon dioxide, a major greenhouse gas. One new plant planned for Iowa, for example, would dump 5.9 million tons of the stuff into the air in just one year. Two proposed Kansas plants would add 11 million tons annually.

Not surprisingly, none of these facts make it into the industry's marketing campaign. Two images you also will never see in a pro-coal commercial are pictures of coal plants or smokestacks. If imitation really is the sincerest form of flattery, then the coal industry is positively in love with the environmental movement. Blue skies with fluffy white clouds and greenery abound in pro-coal commercials.

The industry's campaign gained visibility this year by piggybacking on the presidential race. First up was a CNN ad buy where the industry co-sponsored four presidential debates. As early as the Iowa caucuses, Clean Coal staffers were driving their blue-sky-bedecked vans from rally to rally, shadowing the candidates. Billboards and ads tailored to each area have appeared in almost every state during each primary and caucus campaign.

As the primary and caucus season has dragged on, it's been hard to avoid the Clean Coal message. If you've watched a Sunday morning political talk show, you've seen a Clean Coal commercial. If you've attended a candidate rally and someone gave you a free Clean Coal T-shirt or ball cap, or shoved a Clean Coal brochure into your hand, you, too, have been touched by the coal industry. (Currently Clean Coal staff are in Kentucky in conjunction with Tuesday's primary.) Even Santa Claus got into the act in December. The industry sent 30 Santas to Capitol Hill to put a pro-coal twist on the old idea that only the naughty get a lump of something black in their Christmas stockings. The Santas delivered stockings filled with coal-shaped chocolate.

Coal's message has been carried by an ever-morphing conglomeration of nonprofit organizations that all work out of the same Alexandria, Va., office and use the same staff. The Center for Energy and Economic Development (working "on behalf of coal's interests") begot Americans for Balanced Energy Choices (promoting coal, but also "proponents of wind, solar and nuclear," its senior communications director reported). The two merged on April 17 to become the American Coalition for Clean Coal Electricity, or "ACE," as its leaders like to call it.

All three groups have been funded by the biggest names in coal and related industries. In its existence as ACE, the organization is supported by 40 corporations. Each incarnation has received funding from Peabody Energy, the world's largest private-sector coal company. Gregory H. Boyce, chairman and CEO of Peabody, sits on ACE's board.

Whatever face the industry has put on its campaign, though, coal and its allies are pouring millions into the effort. The budget of ACE's predecessor, Americans for Balanced Energy Choices, leaped from $8 million in 2006 to $15 million in 2007 to $35 million in 2008. This month ACE announced that its budget this year will be $45 million.

At the heart of the Clean Coal campaign are two ideas: 1) We can't stop using coal because it is abundant and cheap, and non-polluting sources like wind and solar power can't meet our needs; 2) technology will fix everything. Environmentalists assume that once a permit has been granted for a new plant, that plant will immediately start emitting carbon dioxide, explains Joe Lucas, vice president for communications for ACE. "In reality, it is between eight and 12 years before a plant goes into operation," Lucas says. "What has been missed is that during that period new technologies are going to start to come online."

The savior of the Earth will be a collection of technologies that will enable plants to capture the carbon they currently send into the air. The carbon would then be stored underground. "There has never been a technological challenge facing the coal-based sector where technology hasn't solved the problem," Lucas says.

The problem with the "trust us, we'll fix this" approach is that carbon capture and storage isn't close to being technically perfected or to becoming economically feasible. "When they say 'clean coal,' the first question that comes to mind is have they invented a new product that actually solves global warming, because right now that doesn't exist," says Bruce Nilles, director of the Sierra Club's National Coal Campaign. "It is a figment of their imagination." The Clean Coal campaign, he says, "is the latest example of trying to sell you the Brooklyn Bridge."

Achieving workable carbon capture and storage may be even more difficult than first thought. The New York Times recently reported that many energy experts have likened it to putting a man on the moon. Among the many problems is the fact that this moon shot has to be replicated at coal plants throughout the world. Many of those plants are in economically and technologically poor countries. The task is so expensive that the federal government's only major project designed to demonstrate the technology, a full-scale plant called FutureGen, is in danger of going under. The Department of Energy is attempting to revamp the project, while the latest word from Congress is that it might be put on hold until a new president takes over.

Even the most enthusiastic coal boosters admit that widespread use of carbon capture and storage technology is at least a decade away. Other estimates place that date at 20 years, says Patrick Hogan, a solutions fellow at the Pew Center on Global Climate Change.

Lucas' time frame is even a bit off for individual plants. The planned Kansas facilities would only take about five years to go online, not the eight to 12 years Lucas cited. Scientists warn that any delay will be disastrous. The problem is that greenhouse gases remain in the air. "Every day we delay, we're pumping stuff out there, and it's building up and making the problem worse and worse," Hogan says. "Even if we all stopped emitting tomorrow -- shut off all cars, and all power plants reached zero emissions -- you'd still see the effects of that buildup, probably over the next few centuries."

Climatologist James Hansen, director of NASA's Goddard Institute for Space Studies, has proposed a moratorium on building new coal- fired plants without carbon capture and storage. Existing plants would be phased out over the next 20 years. Last March, former Vice President Al Gore testified before Congress for the same kind of moratorium.

As the coal debate continues, the National Oceanic and Atmospheric Administration announced April 23 that global levels of atmospheric carbon dioxide increased by 19 billion tons in the last year. The worldwide concentration is now 385 parts per million. The level that is expected to tip the world into disaster is 450 parts per million.

Obama, Clinton and John McCain all favor legislation to fight climate change. The nearly identical programs proposed by the two Democrats are more far-reaching than that put forth by McCain. However, none of them support a moratorium on building new coal-fired plants.

Meanwhile, the Clean Coal marketing machine keeps rolling. As one commercial declares, coal powers "our way of life." On the soundtrack, Kool and the Gang sing, "Celebrate good times, come on!"

Diane Silver is a Kansas-based freelancer who writes about politics, climate change and human rights.