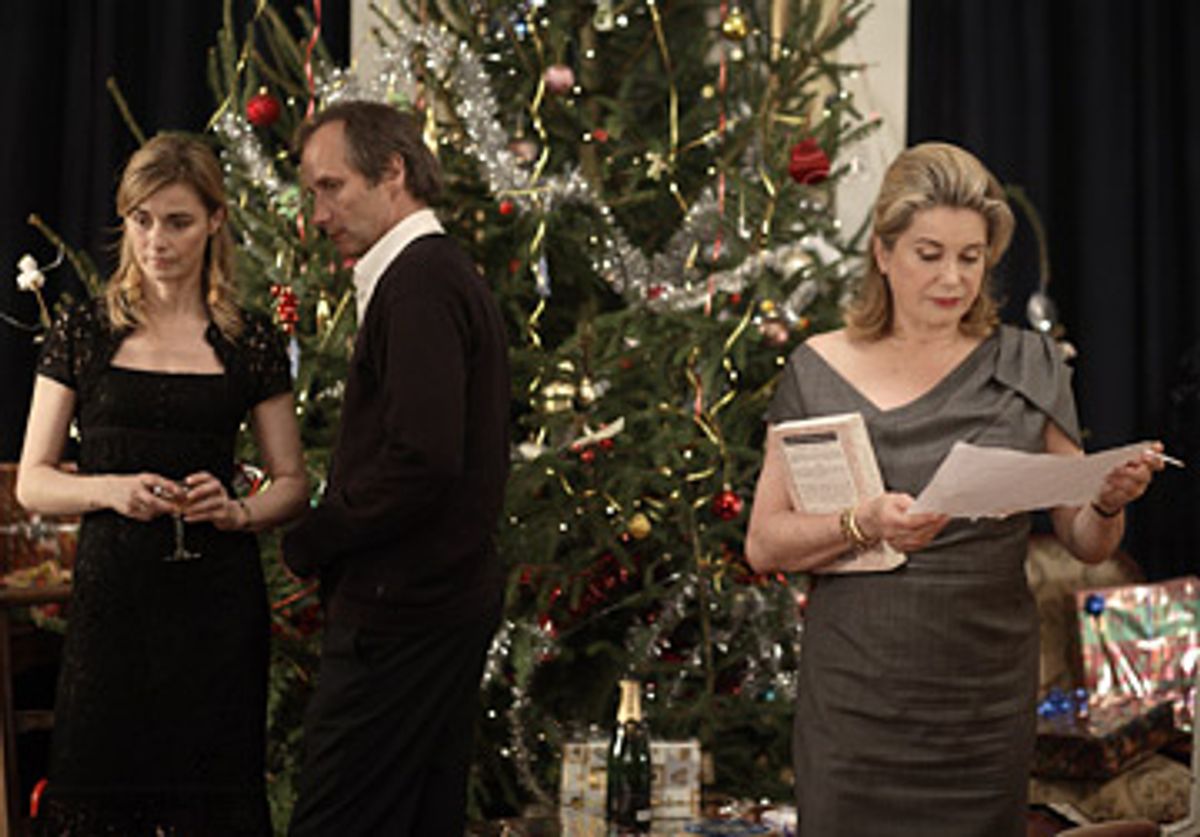 CANNES, France -- With cool, rainy weather settling in here for the weekend, the disco just up the street from my apartment building ran out of customers early on Thursday night. After a final medley of "Let's Dance," "Love Rollercoaster" and "You Shook Me All Night Long," the place shut down just after midnight and sent its youthful stragglers off to the Tunisian kebab shops. Friday night ought to make for a livelier dance floor, but after three days and five competition films, this festival feels sober, even serious. We've seen several ambitious and worthwhile films, and a couple I think are outstanding, but general reactions have been mixed to everything, and there's no clear Palme d'Or frontrunner among the first few entries.

Friday morning saw the press premiere of "A Christmas Tale" (Un Conte de Noël"), the new film from "Kings and Queen" director Arnaud Desplechin, possibly the most celebrated of current French directors. Like so much of Desplechin's work, this combines a largely naturalistic story with a highly idiosyncratic approach. Characters address the camera directly, or narrate their letters before a photographer's backdrop. There's a puppet show, a children's play, bits of romantic fantasy and mock-noir montage -- depicting the abundant nightlife of Roubaix, the provincial city in northern France where the story takes place -- as well as quotations from Emerson, Nietzsche and Shakespeare and snippets from "Funny Face," "The Ten Commandments" and other films I didn't catch.

Also, like much of Desplechin's work "A Christmas Tale" has elements of artistic transubstantiation. To a significant degree it adapts the central themes and formal approaches of Ingmar Bergman into something distinctively contemporary and distinctively French. Its all-star cast -- Catherine Deneuve, Mathieu Amalric, Chiara Mastroianni, Hippolyte Girardot and several others -- play members of a family poisoned by grief whose Yuletide reunion at their parents' house involves facing mortality, madness, buried sexual secrets and just the faintest suggestion of a ghost. This is the kind of Christmas where brothers-in-law have a violent punch-out at the dinner table, Mom "forgets" to bring her son's girlfriend home from the mall, little kids find their mother in bed with a man who's not their dad, and we get to watch a bone-marrow transplant in much more detail than we want to.

Deneuve plays the diffident matriarch who may be dying of leukemia, and veteran French comedian Jean-Paul Roussillon is marvelous as her adoring older husband. Their adult children are the high-strung playwright Elizabeth, played by Anne Consigny (an actress new to me, who is terrific), the bitter, alcoholic Henri (Amalric) -- whom Elizabeth has banished from her life -- and the congenial Ivan (Melvil Poupaud), whose wife, Sylvia (Mastroianni, Deneuve's real-life daughter), only now learns about the secret agreement between three teenage boys that brought them together in the first place. Girardot plays Elizabeth's husband, a supercilious mathematician, and the ever-gorgeous Emmanuelle Devos plays Henri's Jewish girlfriend, uneasy with the whole notion of Christmas.

At the very beginning of the film, we learn crucial background information -- about the family's first-born child, Joseph, who died at age 6 -- through a brief puppet-show sequence. Later in the film, the children's play (performed by Ivan and Sylvia's twin sons) recapitulates the central themes of the larger story in small but broad strokes: banishment, punishment, repentance, forgiveness. These and other moments of Bergman homage are too specific to be accidental, and the entire film bears a family resemblance to Bergman's "country-house" pictures, from "Wild Strawberries" to "Fanny and Alexander."

That patrimony may have something to do with what appears to be a mixed response here. "A Christmas Tale" lacks the Hitchcock-style femme fatale of "Kings and Queen" (played by Devos) or that film's elements of Hitchcockian thriller. Rather than supplying the holiday healing suggested by the title, Desplechin (and co-writer Emmanuel Bourdieu) have constructed a tale as emotionally challenging, fragmentary and unresolved as family life itself. At the press conference after the film, Desplechin said he always aimed to make films that were "strange and personal," and that were singular rather than generic. He has succeeded, perhaps at the cost of demanding too much from his viewers.

If this is not the obvious masterpiece on first viewing that "Kings and Queen" was, I found "A Christmas Tale" a marvelously rich visual, intellectual and emotional experience, one that I expect will grow deeper with repeat viewings. IFC has acquired United States distribution rights, and I applaud the company's courage. This won't be an easy sell even to European audiences, and it's not likely to win the Palme d'Or. But if I see another film all year long that prickles me, disturbs me or moves me half as much, I'll be surprised.