Gay marriage, so what?

Maybe I should be more grateful, but the California Supreme Court hasn't told me anything I don't already know. 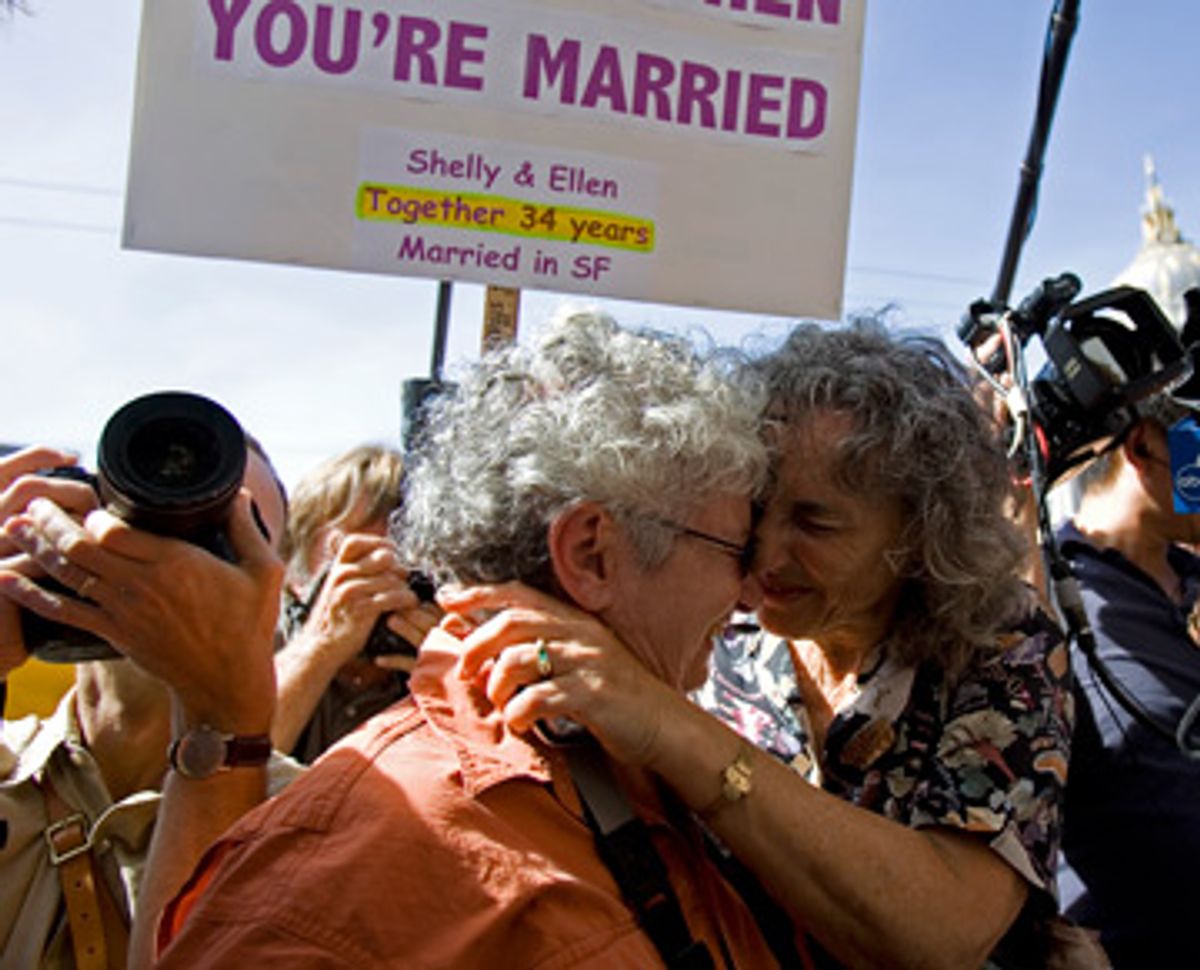 Hey, straight world? I think I'm finally over you.

I know. As a gay man, I should be more grateful. This very day, the California Supreme Court has ruled that same-sex couples have a constitutional right to marry, and unless a higher court intervenes, boy couples and girl couples will soon be lining up for marriage licenses and holding big honking receptions on the Golden Gate Bridge or the Santa Monica Freeway or whatever nightmare visions are currently haunting the Concerned Women of America. And all this is big news, and welcome news, and a lot of dedicated people, gay and straight, have worked very hard to bring it about.

But here's the deal. The California Supreme Court hasn't told me anything I don't already know, and it hasn't told you guys anything you necessarily want to hear.

Or maybe it's just we hear different things. For gay Americans, the issue of marriage speaks to our identity. For many years -- too many to count, really -- we were told our relationships were unworthy of legal recognition because they were too different from marriage; now we're told our relationships are unworthy of recognition because they're too similar to marriage -- so very similar that they might kill off marriage altogether.

This is more than a bait-and-switch operation, it is an injustice, and one that gay couples live through every day. And that's how we tend to see this issue: through the context of our lives. By contrast, many straight Americans see gay marriage -- how could they not? -- through the prism of politics. From the moment the California Supreme Court announced its decision, presidential campaigns kicked into overdrive, crafting carefully parsed statements that would reassure the faithful without alienating the undecided, while party apparatchiks and mainstream media fell over themselves trying to answer the all-consuming question: How will this affect the presidential election?

We know what to expect in the months ahead. GOP operatives will be cranking up as much hysteria as they can around "Mr. and Mr. Smith," and Democratic operatives will be trying, in the same breath, to crank it down. One side will be launching get-out-the-vote operations to save marriage; one side will be asking us (silently or aloud) why we had to bring up the subject now. Couldn't we have waited till December?

And God help me, I am tired of turning on the TV or opening the newspaper and seeing this issue illustrated by the same stock footage of two men or two women in matching tuxes -- as if the right to marry were just the right to have a bitching wedding.

The wedding trope is particularly nonsensical because, for several generations, gay couples have been showing America how marriages can be created without benefit of weddings. You may have seen us. Signing onto mortgages and joint checking accounts. Hosting barbecues, buying cars, planning for retirement. Starting families or not starting them. Wondering where the years have gone. Without any blessing from the state, we've married each other; we're just waiting for the rest of America to catch up.

And when the election's over? We'll still be here. Come up and see us sometime.