The Dunder Mifflin crew caps the season with a flurry of plot twists and fireworks. 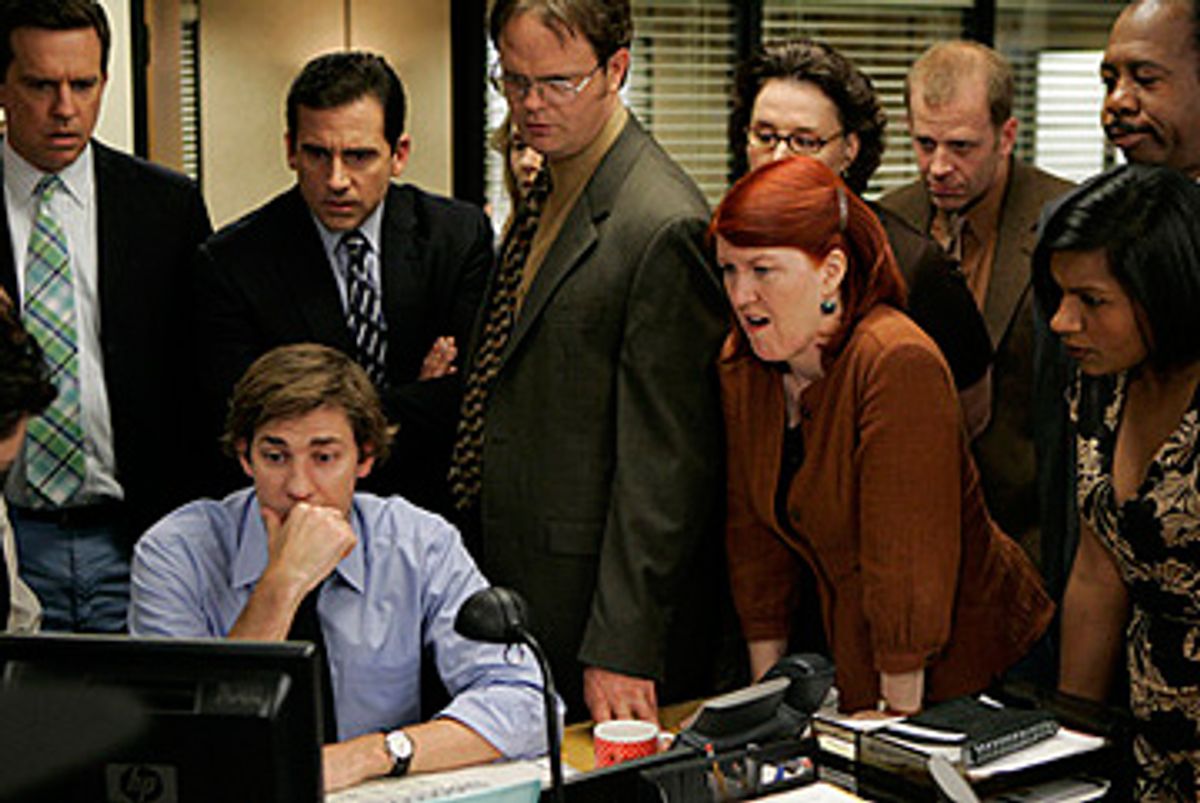 It might seem petty to fault a show that skewers the ridiculousness of the modern office for being too over the top, but a lot of ridiculous things happened on "The Office" this season that are hard to forgive. There were moments of sublime brilliance -- the cringingly delicious dinner-party episode -- but there were also a lot of big, loud, unbelievable moments, and the finale tried to compensate with a lot of fireworks, both literal and figurative. It mirrored the rest of the show's fourth season: funny at times, sure, but unsatisfying.

Blame those plus-size episodes. The season's several hour-long installments were too much of a good thing. They felt watered down, the same number of jokes spread over double the time. We saw less of the side characters: Oscar (Oscar Nunez) was gone for a while; Meredith (Kate Flannery) disappeared for a time after Michael (Steve Carell), in one of those big, loud moments, hit her with his car. Yet the larger character arcs, the season-long narratives, never really picked up speed. The long mid-season break brought on by the strike didn't help: By the time the dinner party episode -- in which Jan and Michael publicly played out their issues -- aired, right after the strike, Jan's (Melora Hardin) suit against Dunder Mifflin and Ryan's Web 2.0 visions for the company were hard to recall. And the show's timing never really recovered. It became a guessing game for critics and fans -- when would "The Office" start being "The Office" again?

One thing "The Office" has always been good for, though, is big endings. The last two seasons delivered a satisfying show that wrapped up some of the season's plotlines while making us curse that it would be months until we got to see the next one. Going into Thursday's season finale, expectations were high. This episode would finally bring it all together! Jim's (John Krasinski) proposal to Pam (Jenna Fischer) was probably going to be the centerpiece, but other plotlines waited in the wings: the renewed frisson between Angela (Angela Martin) and Dwight (Rainn Wilson), Michael's unresolved relationship with Jan, Toby's (episode co-writer Paul Lieberstein) move to Costa Rica, the battle of passive aggressiveness between Ryan and Jim. Despite the season's disappointments, last week's lead-in hinted that a lot would go down, and to quote from the voice-over promo cliché handbook, "The Office" "would never be the same again."

The show's theme was Toby's last day -- he's moving to Costa Rica. Versatile Oscar nominee Amy Ryan, also familiar to fans of "The Wire," arrives as Holly Flax, the new face of H.R. A mixture of gullible, cute and theatrical, she's less an obvious comic character than the rest of the cast. When Michael explains that she's filling the void as his logical opposite -- he calls human resources a "breeding ground for monsters" -- she parries with a joke about how boring Toby's tour of the office files was. Of course, Michael instantly falls in love with her.

Other shenanigans play out on the side: Ryan is arrested for his fraudulent practice of having employees enter all sales twice, once on the old system, once on the Web. Dwight begins hazing Holly, as though being hired to work in Scranton were like rushing a state school frat. "Hazing is a fun way to show a new employee she is not welcome or liked," he tells us. His tricks fall mostly by the wayside, except for the way he convinces Holly that Kevin (Brian Baumgartner) is the office's "special" employee.

Meanwhile, the party planning committee is arranging Toby's last hurrah. They end up with a miniature fair in the parking lot, complete with bouncy air castle and Ferris wheel. Jim offers to pay for fireworks. The stage is set! When will Jim pop the question? We know he will, because he tells the camera "I'm going to propose tonight" -- goofy grin -- "holy crap."

When the big moment comes, just as Jim begins fumbling in his pocket for the ring, Andy (Ed Helms) grabs the microphone and asks for everyone's attention. "I was waiting for the right time to do this, and I can't think of a better time than right now," he says. It's like he planned the whole thing -- he even has his parents there! -- and of course he awkwardly asks for Angela's tiny hand in marriage (her reply: "I said OK"). Cut to Dwight, looking pained. Pam's mouth drops open; Jim tucks the ring back into his pocket.

We were meant to feel sad about this, but the moment fizzled. The lack of emotional payoff here gets at why this season of "The Office" felt like it was missing something. For all its sitcom high jinks, the show has always had a sweet undercurrent of drama. We wanted Pam to dump her lame fiancé and be with Jim. We cheered silently for Michael getting together with hot, crazy Jan. Dwight and Angela's secret affair wasn't just played off for laughs.

But Michael provides the episode's only moving moments. After discovering Jan has decided to get pregnant without him -- she went to a sperm bank -- his pain is visible and real, and when he returns to the parking lot party he blows off Holly, who somehow has also clearly become smitten with him. By the end, we see him in his office on the phone, making the inevitable mistake of assuring Jan's voice mail he'll be at her Lamaze class, even though he has no idea what that is.

As a grace note, we're given a shocking final scene: Phyllis goes into the office after the party and catches Dwight and Angela all sweaty and naked. It's the scene that will likely be most discussed around the water cooler today, but it seemed too calculated. Sure, we never thought things would ultimately work out for Andy, but do we really care? He's always been a poor stand-in for Dwight.

I miss the sweetness of the Jim and Pam's romance -- it always stood apart from the rest of the office's gray shallowness, but this season, in part because of Jim's need to propose, it's been infected by it. For the show's first three seasons, we identified with Jim, the ironic presence who often literally winked at the camera. It seemed (or did we hope) that he might, at any moment, grab Pam and find a way out of the Dunder Mifflin cul de sac. Instead, Pam has become the character with a future that might not revolve entirely around paper -- will her three months at the Pratt Institute studying art be the basis for the rumored spin-off show? As the season progressed, Jim's mugging for the camera began to seem rote, his punking Dwight perfunctory, and we slowly began to realize that, as much as he might talk down Dunder Mifflin, he wasn't going anywhere soon. (Michael at one point says, "I look at somebody like Jim Halpert, and I think that guy could do anything that he wants to do. He could do anything. And he chooses to work here, selling paper. Just like me.") In some ways this finale was perhaps the closest the show has come yet to its British original: No one is getting out of here alive. * * * *