Woody Allen and Mike Tyson, together at last

A marriage made in Cannes: Two notorious tabloid-fodder Yanks are showered with love on the Riviera. 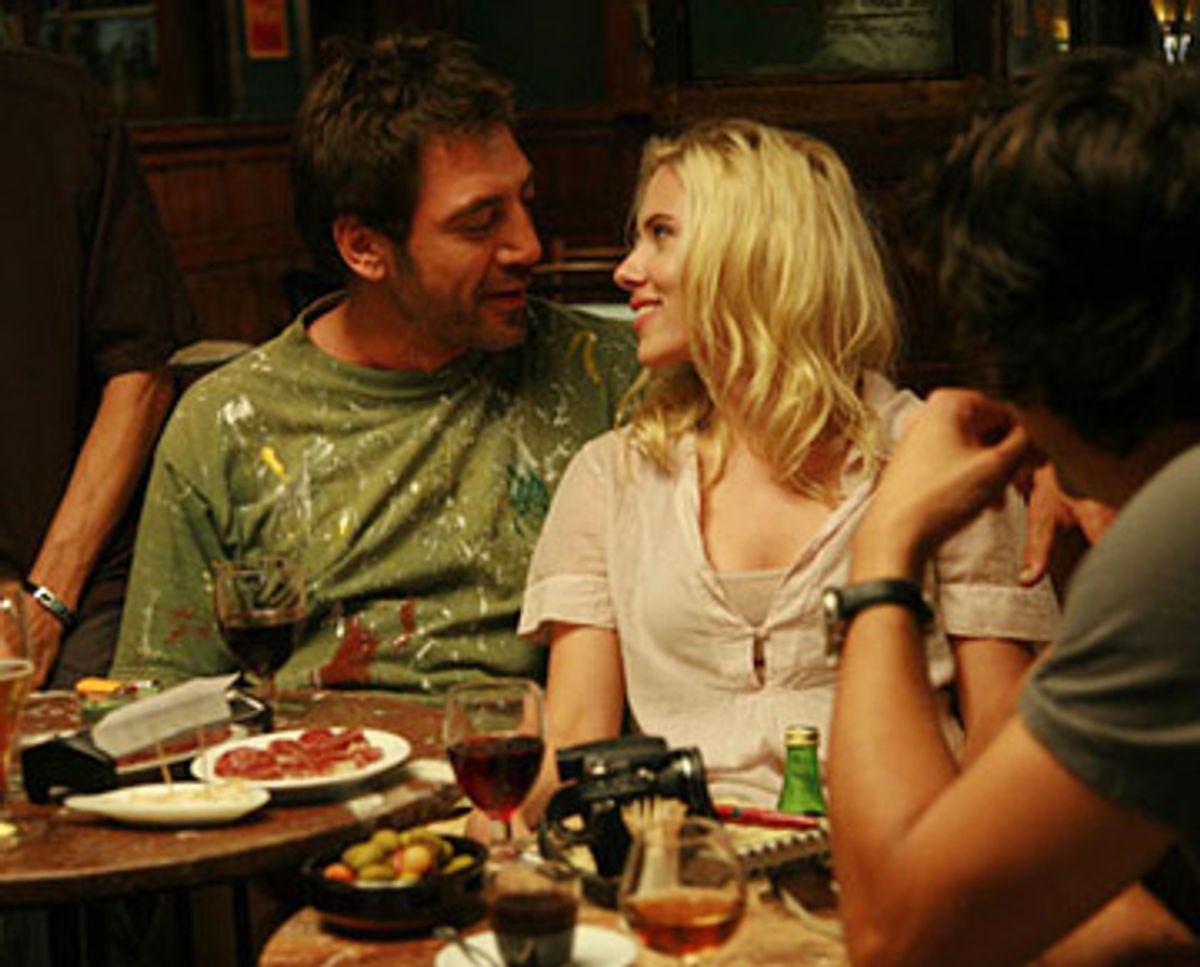 CANNES, France -- "This is way above my level. I'm a little intimidated," said the man on the stage, clearly emotional as he addressed the crowd in the Théâtre Debussy who had just greeted his arrival with a standing ovation. "I've never experienced anything like this in my entire life. Thank you all so much for coming."

Experimental filmmaker from Azerbaijan? Subject of a wrenching family documentary made in a remote Colombian village? No and no. The speaker was former heavyweight champ Mike Tyson, given a hero's welcome here for the premiere of "Tyson," the documentary about his life made by American movie maverick James Toback. On one level the reaction seemed bizarre; as Toback's film makes clear Tyson spent his entire athletic career psyching out opposing fighters and the public. But when I talked about it later over drinks with a few other critics, it dawned on us that Tyson has never before faced a crowd that was cheering for him as a person, rather than because they wanted to see him beat the living crap out of somebody.

The question of whether Tyson should be treated as a hero, in Cannes or anywhere else, is irrelevant to this festival, and also to Toback's film. Immense fame is amoral at its core, and so is the Festival de Cannes. Tyson has survived huge success and a dramatic fall, has endured the suffering he inflicted on others and on himself. Here he is, formerly a boxer of terrifying ferocity and an inordinately wealthy man and now neither of those things but not quite an ordinary middle-aged retired athlete either. That was enough for the Friday night crowd in the Debussy.

"Tyson" was one of the hottest tickets at Cannes so far, which may just reflect the fact that its subject is a worldwide icon whose meteoric career trajectory already seems ready for the movies. It combines Tyson's remarkably candid interviews with Toback with a quickie biopic that covers Tyson's life from his childhood in the crime-ridden Brooklyn, N.Y., neighborhood of Brownsville to his blossoming as a fighter under trainer Cus D'Amato (who virtually adopted him), two stints as the heavyweight champion, three years in prison and beyond.

Toback told us before the screening that he wanted to capture Tyson as a "complicated and in many ways noble human being." One can dispute the adjectives, but he certainly succeeds in rendering a man frequently depicted as an almost animalistic stereotype of African-American manhood as a tortured and vulnerable person who has genuinely struggled to understand his flaws. For the most part Tyson discusses his failings frankly and with a striking degree of insight, but he still refuses to admit any wrongdoing in the 1991 rape case that sent him to prison, and has no idea how much money he has made and lost (at least $300 million, and conceivably much more). Tyson recently filed for bankruptcy, but my guess is his money's no good here this weekend. (Since he's both a Muslim and a 12-stepper these days, the rosé is officially off limits.)

Another famous American with a tabloid-heavy history who's coming on all friendly-like with the European public is Woody Allen, whose new film "Vicky Cristina Barcelona" debuts on Saturday night. As I write this in the festival press room, in fact, Allen and his wife Soon-Yi Previn, along with Penélope Cruz and British actress Rebecca Hall, are ascending the steps a few hundred meters away. (Scarlett Johansson appears not to be present.) Cruz has just told a television reporter that this evening's gray and rainy skies over Cannes are "beautiful in a different way."

Allen has always had a different status on this side of the Atlantic than at home, but the contrast has grown ever starker in recent years. At age 72, he gets the prime spot on opening weekend in Cannes for a film that's likely to be a fleeting afterthought in the American indie marketplace. (If all goes as planned, I should have brief interviews with Allen, Hall and Cruz up in this space in a couple of days. After a long career of Garbo-like reticence, Allen is suddenly Mr. Availability.)

Maybe Allen is another of those Jerry Lewis figures in American culture who just reads differently in Europe (see also Jim Jarmusch, Abel Ferrara and, increasingly, Quentin Tarantino) but I'm inclined to believe that both sides are wrong about him. Allen seems to me to have been punished unjustly by his former American admirers for perceived failings in his private life, and it's no good judging an artist on that basis. On the other hand, I don't see how anybody can argue that his recent films -- while they're far from being terrible -- support the widespread European view that he remains a major figure in world cinema.

I caught "Vicky Cristina Barcelona" at Friday's press screening, and it's a pretty good late Allen film, meaning that it's a competent, entertaining blend of sweetness and misanthropy, and that the director seems enormously far away from his characters. Johansson and the British actress Rebecca Hall play Cristina and Vicky, two young Americans spending their summer together in I-bet-you-can-guess-which Spanish city. Neither character is all that interesting; they're like ideas about "today's girls" rather than the real thing. (Are we really supposed to believe that Vicky, who is writing a master's thesis on "Catalan identity," speaks no Spanish or Catalan? That's knockoff Tom Wolfe satire about the degradation of American education, not Woody Allen.)

At least Hall's gawky good girl, engaged to a chino-wearing business-school twerp (Chris Messina), actually seems alive with unconscious yearning and tormented by her post-graduate contradictions. This is one of Johansson's dullest roles; Cristina may be blonde and hot, and may think of herself as an artistic and sexual adventurer, but she seems profoundly bored with herself and with life. As with so many of Allen's pictures since the '90s, it's impossible to say whether he's fully aware of his contempt for his characters, or precisely what it's expressing. (Oh, OK, we can guess. But I'll leave that to you.)

What Allen's got here is something like a lightweight reworking of "Portrait of a Lady," or one of Henry James' other moral fables about American innocents abroad. Vicky and Cristina's Mephistophelean seducer is a bedroom-eyed Barcelona painter named Juan Antonio, and if the role is pretty close to Latin-lover caricature, Javier Bardem certainly digs into it with relish. Juan Antonio immediately tells our heroines that he wants to sleep with both of them. Vicky blows him off and Cristina is hot to trot, but if you're guessing that A) he'll get what he wants and B) none of it will quite work out as expected, then I guess you've seen movies before.

Anybody who knows Allen's films can see him projecting himself into these characters, or trying to. Sometimes it seems like fantasy wish-fulfillment, and sometimes like self-judgment. When Cristina imagines herself escaping the Puritanism and provinciality of America for a European artist's life (or at least a European artist's mistress' life), you think, oh, OK. When Juan Antonio proves so charismatic that beautiful women flock to his bed in multiples, you think, oh, OK.

All these people will in fact be disappointed, which may be the most honest aspect of "Vicky Cristina Barcelona," if not the most enjoyable. That property belongs to Penélope Cruz as Juan Antonio's demented ex-wife, a free-floating agent of chaos whose only role is to disrupt and destroy all possible manifestations of the central triangle.

Allen admitted at today's press conference that he made this film because Spanish financiers invited him to shoot in Barcelona; perhaps in the last stage of his career he'll become an itinerant artist who hires himself out to tourist boards in picturesque locations. One journalist from Uzbekistan invited him to come work in her country, and brought down the house by observing that this movie ought to play well in Central Asia, "where in our tradition we still have many women in the house as wives."

Beyond The Multiplex Boxing Documentaries Movies