Ignore the McCain vs. Obama polls

In the absence of other political news, pundits are obsessing over head-to-head matchups between McCain and Obama. It's much ado about very little. 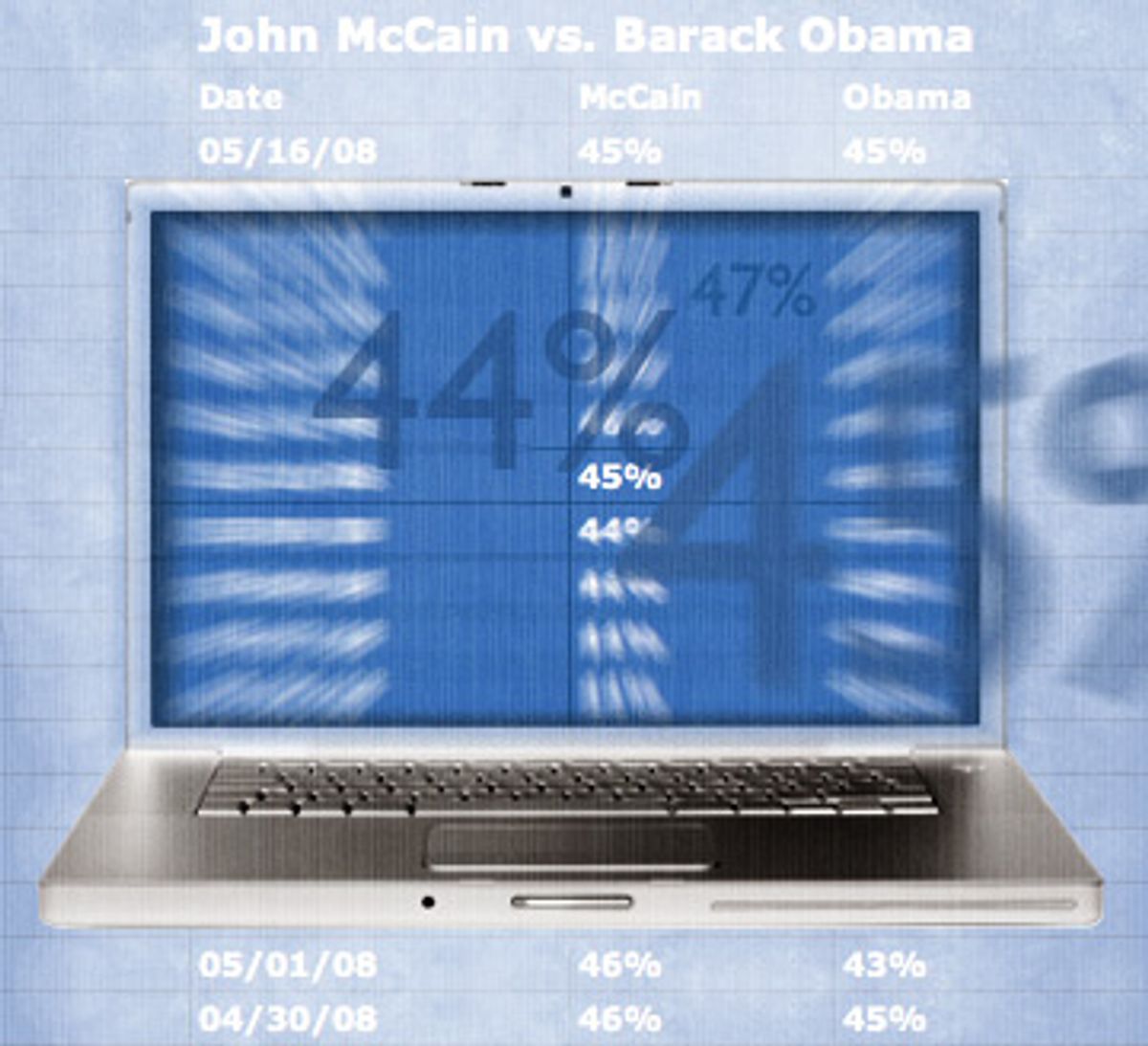 A grave crisis confronts America: The Democratic nomination fight that would never end is about to. With Hillary Clinton's days as a plausible presidential candidate dwindling down to a precious few, the question now haunting the nation is the same one that Robert Redford pondered at the end of "The Candidate": "What do we do now?"

For cable television, this is a debacle on par with the end of the O.J. trial. From April 15 to May 15, 69 percent of the airtime on the cable news networks was devoted to presidential politics during key viewing hours, according to the Project for Excellence in Journalism. To repeat: The Rev. Jeremiah Wright, the Pennsylvania primary and Obama's ascension received double the TV news coverage of the rest of the world combined, from Burmese typhoons to a forgotten president named Bush.

There is, to be sure, an unusual hunger for political news. According to a Washington Post-ABC News national poll conducted last week, 39 percent of those surveyed said that they were following the presidential race "very closely." When a similar question was asked in April 2000 that number was only 17 percent.

What do you do, more than five months prior to the general election, when the supply of significant political news cannot keep up with the demand? Thank God for pollsters, and red and blue maps, and Electoral College widgets.

As the talking heads on TV (along with those of us who still traffic in written words) switch to saturation coverage of Obama vs. McCain, every blip in the national polls is treated as a revelation on par with Dick Cheney's personal invasion plans for Iran. Forests are being turned into pulp analyzing what it means that, say, the nightly Rasmussen presidential tracking poll has Obama and McCain knotted at 45 percent each.

In truth, May horse-race polls have the predictive powers of a 7-year-old dressed up as a swami and using an upside down goldfish bowl to peer into the future. In the last five presidential elections, the Gallup Poll conducted right before Memorial Day got the eventual winner of the national popular vote wrong. From Michael Dukakis' 13-percentage-point lead in 1988 to John Kerry's 4-point edge in 2004, the Gallup Poll (like other national surveys) pointed in precisely the wrong direction. The only unequivocal success story was 1996, when Gallup (along with virtually every sentient American) figured out that the then-youthful Bill Clinton would handily defeat Bob Dole, the oldest first-time presidential nominee in history (McCain included).

This is about the time when news organizations unveil their maps of battleground states in an effort to preview the fall campaign. (Democratic pollster Paul Maslin did an artful job at this task for Salon). Too often the discussions of the political map are based on the glib assumption that the 2008 red-vs.-blue divide will look like 2000 and 2004. But the last two presidential contests were exceptionally similar elections for reasons that went beyond the waves of despair that hit the Democrats as the returns came in. Not since the Dwight Eisenhower landslides of 1952 and 1956 have as few states (New Hampshire, Iowa and New Mexico) changed parties in back-to-back elections.

What passes as political news in May often looks like trivia in hindsight. Four years ago this week, the political news provided few clues that the 2004 election would pivot around Republican turnout in rural Ohio. Kerry was still bandaging the last lingering wounds from the Democratic primary, effusively praising Dick Gephardt (and implicitly boosting him as a vice-presidential favorite) before the Teamsters in Las Vegas and then appearing with Howard Dean at an antiwar rally in Portland, Ore., designed to counter Ralph Nader's return-bid spoiler presidential campaign. For the record, Gephardt was not Kerry's running mate (though Rupert Murdoch's New York Post ballyhooed his selection in an epic wrong-call front-page headline) and Nader, who did not appear on the ballot in Oregon, won only 464,000 votes nationally.

None of this is to argue that there is no such thing as political news in May, or that all current measures of public opinion are irrelevant. Any analysis of the political climate has to factor in the jaw-dropping statistic from the recent Washington Post-ABC News poll that 82 percent of the public believes that the country is on the "wrong track." In similar fashion, the California gay-marriage decision may end up having far more influence on the election than anything that Obama or McCain say or do this week. Four years ago this week -- probably to Kerry's eternal political detriment -- the first legal gay marriage ceremonies were performed in Massachusetts.

The most dominant political story for the next three months will be the casting of the ballots in America's two most important non-free elections: Obama's and McCain's choice of running mates. If history is any guide, the pick-the-veep speculation will be for naught. At this point in 2000, the only mentions of Dick Cheney in the news are glancing references to his role in helping Bush winnow down the field of candidates for the heartbeat-away job. A NEXIS search from May 15-30, 2000, failed to find a single major newspaper (aside from the Hartford Courant) that even spent much time speculating about Joe Lieberman's chances to be on the ticket with Al Gore.

King Canute probably had a better shot of getting the tides to recede than this article does at convincing political junkies to go cold turkey. But aside from the vice-presidential selections, most political news until the conventions should come with this medical warning: "Dangerous side effects include a preoccupation with ephemera and a loss of all sense of proportion."