Indy and the Martian Inca mummies -- vs. the French! 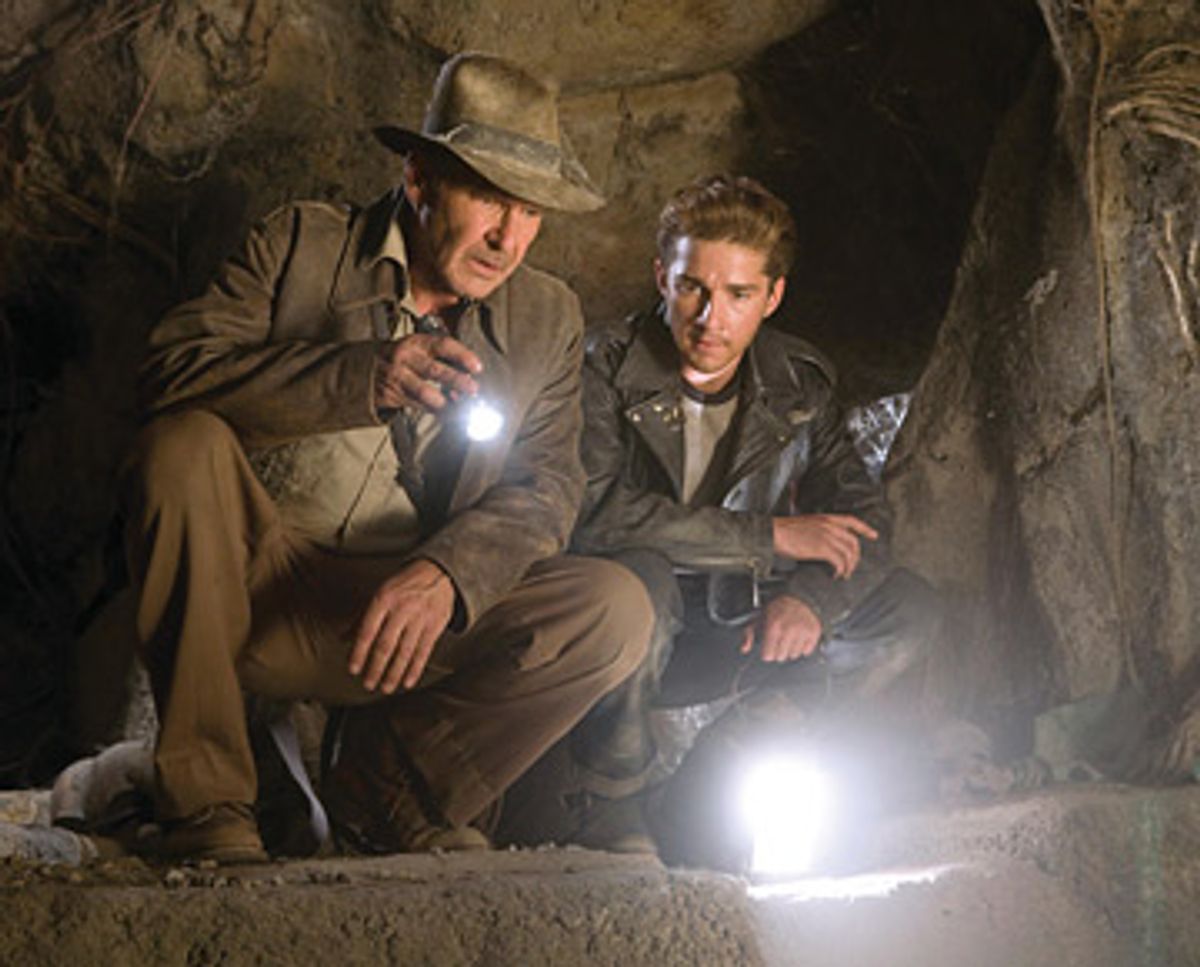 Harrison Ford (left) is back as Indiana Jones, co-starring with Shia LaBeouf in "Indiana Jones and the Kingdom of the Crystal Skull."

CANNES, France -- Jim Jarmusch received an award called the Carrosse d'Or late on Saturday night here, and if it's not one of Cannes' big-name prizes it's a coveted one among film directors. It's given by the French directors' guild during the Directors' Fortnight sidebar festival, and it's a lifetime achievement award given to a non-French filmmaker of world renown. (Previous winners have included David Cronenberg, Clint Eastwood and Ousmane Sembène.) During his potent speech about the power and limits of cinema, Jarmusch reminded us that Sunday would mark 40 years to the day since the student uprising of May 1968 invaded the Festival de Cannes, bringing that year's edition to an early and abrupt conclusion.

So how did Cannes celebrate the anniversary of that near-revolution, which had such a profound effect on French culture and French history? With "Indiana Jones and the Kingdom of the Crystal Skull," bien sûr! Hey, isn't it the Frenchies who have some saying about how the more things change, the more they stay the same? Steven Spielberg and George Lucas' long, long, long awaited fourth chapter in their big-budget-imitating-low-budget, self-consciously old-fashioned boys' adventure serial screened here for the first time before an audience on Sunday afternoon, and it was far and away the biggest and craziest media circus I've seen in three years at Cannes. Spielberg, Lucas and Harrison Ford (at a collective age of 190) will see your Brangelina hubbub and double it.

Part of me thinks that some flea-bitten Parisian radicals should come and close this shit down right now. And part of me thinks: You know what? Cannes needs Indy. We've had five days here of earnest and serious filmmaking, ranging from mediocre to outstanding, but nothing that feels like a movie that will rock the world. (And the locals will get their chance to revisit '68 when French counterculture hero Philippe Garrel shows up with his first-ever competition film.) Couple that with the unseasonably dreary weather on the Riviera, and the pent-up demand for celebutainment and sunshine was becoming unmanageable.

I'm not sure whether that guy ever got his snap of 'Arrison, but Ford worked both sides of the rope line avidly on his way out of the post-screening press conference, signing autographs, shaking hands and consenting, with avuncular grace, to being kissed by comely young women. You can say that his regular-guy shtick is shtick, but it's working for him and he clearly buys it himself. When a reporter asked him how he felt about the literally hundreds of people standing outside on the Croisette with hand-lettered signs, hoping to beg, borrow or steal a ticket to Sunday night's red-carpet screening ("Un billet Indy Jones S.V.P.?"), Ford said: "It's very gratifying. We're a service occupation, as I see it. People have to be interested in the stories we tell, or we're out of luck and out of business."

No one doubts that those hundreds of people on the sidewalk in Cannes represent untold millions of others around the world eager to see this movie. But if you want to know whether Ford, Spielberg and Lucas can recapture their mojo almost 20 years after "Indiana Jones and the Last Crusade," the only answers I can provide are frustrating ones, like kind of and maybe and it depends what you mean. The joy of the original Indiana Jones series lay in its discovery or rediscovery of the audience's love of cinema as pure adventure, unadorned with social issues or character psychology. In other words, they were meant to take you back to childhood, and perhaps not even your own childhood but your parents' or grandparents' childhood, or America's childhood.

Can that kind of rediscovery keep happening over and over again? And should it? Yes, it's rude to bring this up, but Ford, Lucas and Spielberg are all a lot older than they once were, and so are the rest of us. Furthermore, when Lucas and Spielberg launched this series in 1981, they were pioneers. Adventure movies had been left behind by the self-serious American cinema of the '70s, and they were the guys who were bringing them back. In the years since then, the world's filmgoers have gorged themselves on adventure movies, cheap ones and mind-blowingly expensive ones and every gradation in between. Asking the audience to remember how delighted they were by a swashbuckler made 27 years ago is like asking a diabetic to remember an awesome piece of chocolate cake he ate in high school.

In a sense, "Indiana Jones and the Kingdom of the Crystal Skull" has to get by on its nostalgia appeal -- nostalgia for an earlier style of filmmaking, nostalgia for an aging and beloved character, even nostalgia for an older and more innocent form of nostalgia -- which is an odd path to success for a $125 million motion picture. At the press conference, Spielberg compared these films (for roughly the bajillionth time) to the old Republic Films serials, which were already old-school in his 1950s childhood. The secret of the Jones movies, he said, was to "shoot a compact and economically told story ... and do it with real stunts and real people. We don't say we'll go and make the most amazing chase scene ever. We ask what the story demands and how we can make that funny and exciting."

Fair enough, and even in its inflated and creaky fourth incarnation, the Indy series retains a certain unassuming quality, at least compared to Hollywood's recent monstrous productions. Ford is rarely called upon to run more than a few steps, but he's a capable and athletic 65-year-old star who performs his own stunts. Until the film's ludicrous conclusion, which involves a big spinning hoobledy-whatsit full of supernatural thingummies (I think that's officially not a spoiler), there are relatively few digital effects. As Spielberg put it: "There's no inspiration when the director and actors walk onto the set and it's nothing but a blue screen. I wanted to be in all these wonderful booby-trap sets, which are built nearly to the scale you see on-screen, and get my ideas for great shots from the sets themselves."

My colleague Stephanie Zacharek will write a full review of "Indiana Jones and the Temple of the Crystal Skull" before its worldwide opening on May 22, so I'll limit myself to a few general comments. If you're profoundly allergic to any plot info, check out now, but I won't give anything away that isn't glaringly obvious from the trailer or the first half-hour. As all fans know by now, Spielberg and Lucas have aged Indy in "real time," so it's now 1957 in their universe. In the film's first few minutes, they channel the Red Scare, Elvis Presley, the alleged 1947 flying saucer crash in Roswell, N.M., the secret Nevada military test site known as Area 51, and the A-bomb.

Cate Blanchett is hilarious in a grossly underwritten role as a feline Soviet officer-scientist, basically a Bond villainess who wears the pants (and keeps them on). Spielberg is always a fine director of people and things in motion, and the first half-hour is terrific fun. But by the time Blanchett and her Commie minions have stolen a priceless artifact with strange powers (can you guess what it is?) from a super-secure United States military installation and Indy has survived a nuclear test by hiding in a lead-lined '50s refrigerator (and become an object of McCarthyite suspicion), you may begin to wonder whether the story's got anything left, beyond repeating its chase sequences and pseudo-mystical interludes over and over again in different settings. I think you know the answer.

In addition to a crystal skull, possible alien and Commie invasions and an evil Ukrainian with a hot haircut, the story involves several kinds of mummies, flesh-eating ants, the living dead, a previously unknown pictographic writing system, John Hurt in one of his demented-guy roles and the lost Amazonian city of El Dorado, so eagerly sought by Spanish conquistadors and so not-found. (At one point Jones refers to "15th century" conquistadors in South America. Might want to check the math on that, Steve and George.) I don't object to any of the fantastical or fanciful elements whatsoever, but Jesus, why do Spielberg and Lucas have to persist in depicting a supposedly respectable archaeologist raiding, destroying and looting the artifacts of ancient civilizations? Sure, a lot of them did that back in the day, but by '57 things were changing, and shouldn't manly-but-sensitive Indy be a little ahead of the cultural curve?

When Shia LaBeouf turns up as a nothing character called Mutt -- who rides a Harley and dresses like Marlon Brando in "The Wild One" -- to drag Indy out of academia and into the Amazon jungle, I felt actively embarrassed for this movie and its creators. First of all, Mr. LaBeouf, I have seen movies with Marlon Brando in them, and you, sir, are no Marlon Brando. Second of all, I can imagine the meeting where Spielberg and Lucas sat around with their casting agents and stuck pictures of young male stars up on the wall: "The teenyboppers! They love him!" Third of all, you'll never, never in a million years, imagine whose son LaBeouf's character turns out to be. Where the heck did George Lucas come up with that one?

Which brings us to the nostalgic element of "IJKCS" that no one will wish to resist, not even hardhearted me. As advertised, Karen Allen, purged from the series after "Raiders of the Lost Ark," is back as Indy's one-time paramour Marion Ravenwood, and if she's nearly a decade younger than Harrison Ford, that still makes her the most age-appropriate screen companion he's had in many moons. It's enough to make you forgive a great deal of this film's dumbness and appreciate it as meaningless, goodhearted and mostly non-obnoxious entertainment.

In an interview broadcast on French TV right after the screening, both Ford and Allen seemed genuinely emotional about their reunion. "I found it very nostalgic and moving to work with Harrison again," said Allen. "'Raiders of the Lost Ark' was such a big thing in all our lives, certainly in mine. So this was very resonant for me; it felt like walking back through a door into someplace familiar."

It's hard to do justice to Ford's masterful delivery of innocuous phrases in print, but this is more or less how it went: "That was the most important moment of my career [pause] doing 'Raiders of the Lost Ark.' [Pause, head shake.] So reuniting with these guys [gesture at Lucas and Spielberg] and getting back together with Karen [long pause] and all these talented actors [vague wave at LeBeouf, John Hurt, Ray Winstone and Jim Broadbent] was wonderful. [Long, long pause.] Really, really wonderful."