Blood on the beach

From a dizzying reinvention of the Mafia film to Tony Manero as serial killer to the death of Bobby Sands, it's a violent spring at Cannes. 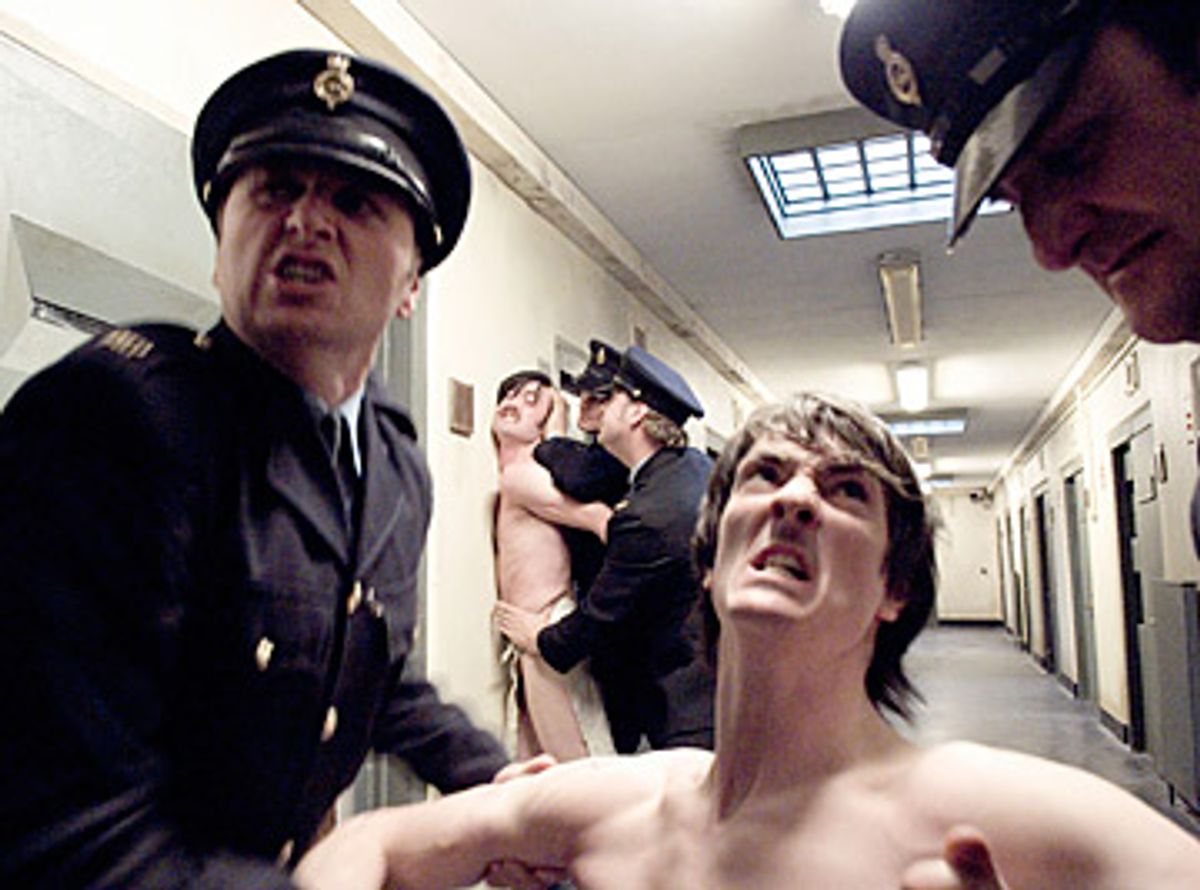 A scene from "Hunger."

CANNES, France -- As the annual beachfront trade show of world cinema reaches its halfway point, there are themes aplenty, none of them terribly uplifting. Movies about violence, crime, incarceration and degradation have dominated the first week here, and brighter days don't necessarily lie ahead. (Clint Eastwood's 1920s baby-switching thriller and Steven Soderbergh's four-hour Che Guevara opus will be unveiled on Tuesday and Wednesday, respectively.) Apparently the marketplace for films is as gloomy as the weather, which has stubbornly refused to yield to the Côte d'Azur's customary spring sunshine.

No doubt distribution deals for all sorts of films in all sorts of countries are being made in hotel bars, beach-tent parties and the stylish restaurants that climb the hill in Le Suquet, Cannes' picturesque old city. But from a Yank-centric point of view, there are only a few nuggets to report. IFC has acquired Arnaud Desplechin's wrenching and marvelous "Christmas Tale" and will be distributing it both in theaters and by video-on-demand, and that's terrific but expected news. IFC will also handle 24-year-old American filmmaker Joshua Safdie's "The Pleasure of Being Robbed" (screening in Directors' Fortnight), which I haven't seen yet. More surprisingly, Sony Pictures Classics has acquired Canadian director Atom Egoyan's competition feature "Adoration," which hasn't yet screened but arrives with only modest buzz.

Moving beyond the business-speak, some of the first week's best films have revealed how much new vibrancy and artistry can be breathed into familiar crime-drama and prison-drama formulations. I only hope you'll actually get to see some of them sometime. Argentine director Pablo Trapero's mothers-in-prison pic "Lion's Den," which I've already covered, remains my Palme d'Or pick among the pictures screened so far.

On Sunday morning we saw Matteo Garrone's "Gomorra," a dynamite reinvention of the Italian Mafioso movie as both a multileveled social melodrama and an Antonioni-style nihilistic contemplation. Based on an Italian nonfiction bestseller about the Neapolitan mob known as the Camorra, Garrone's film travels from the horrifying slum projects of suburban Naples to the corporate suites and the high-fashion ateliers, and finds them all poisoned and corrupted by organized crime.

Many critics here found themselves disoriented by "Gomorra," but I'm sure that's the director's intention. This isn't one of those crime operas with a cast of finely drawn mini-Lears and mini-Hamlets to follow. We're thrown into the middle of five different chaotic stories, and can barely keep up with the characters' names. Two brash teenage idiots decide to wage war against the local Camorra boss, a boozy, video-game-addicted clod who makes Tony Soprano look like Lorenzo de Medici. A tailor in a mob-supported fashion business secretly goes to work for their Chinese-sweatshop rivals. A businessman arranges the illegal dumping of corporate toxic waste on mob-owned land. A likable kid who delivers groceries and an aging mob soldier who drops off money become pawns in a widening gang war.

At times the viewer must struggle to keep up with him, but Garrone finds marvelous, dark, symbolic and poetic images in the appalling and decrepit urban-rural sprawl of Naples, where Chinese immigrants live in a building that's missing exterior walls and a pair of hit men stalking their prey must plod ankle-deep through the muck of an ox-shed. While his movie is about one crime-plagued city (the Camorra is believed responsible for 4,000 murders in Naples since the 1970s), it's hard to avoid seeing it as a broader commentary on Italy's recent social and political paralysis. Furthermore, "Gomorra" blends the disparate traditions of Italian cinema -- the crime drama, the melodrama, the art film -- more adeptly than any movie from that country in recent memory. Even so, Italian pictures can barely draw flies in the United States, and given this one's formal difficulty, it's hard to imagine it playing outside a few big cities.

Similar issues may limit the commercial potential of "Hunger," a remarkable, semi-experimental work by British artist-turned-filmmaker Steve McQueen that opened the Certain Regard section of the Cannes festival and might be the critical fave-rave to date. At least nominally, "Hunger" is about Bobby Sands, the Irish Republican Army hunger striker who starved himself to death in Long Kesh prison in Northern Ireland in 1982. Sands' world-publicized death sparked one of the hottest periods in Ireland's long-running, low-intensity "Troubles"; nine more hunger strikers followed him into the grave and IRA activity (from the British point of view, terrorism) intensified. Sands would without doubt have opposed the long period of compromise and reconciliation that subsequently led to the Good Friday Agreement of 1998.

With only a brief crawl of text to situate the viewer in place and time, McQueen plunges us into the prisoners' and guards' life in Long Kesh, constructed as a bewildering sight-and-sound sculpture where few words are spoken and the atmosphere of unbelievable, almost surreal tension periodically explodes into violence. In pursuit of political-prisoner status, IRA detainees refused to wear prison uniforms, wash or dispose of their waste in orthodox fashion, smearing the cell walls with excrement. (Yes, the whole thing is grotesque, but that way it dries more quickly and doesn't smell as bad.)

I have mixed feelings about "Hunger," largely because the political and religious context of the hunger strikes is crucially important, and the movie deliberately withholds most of it. There are brief snippets from speeches by Britain's then-prime minister, Margaret Thatcher, but only one scene of dialogue in the whole movie. In a single, static 20-minute shot, McQueen and his co-writer Enda Walsh, an Irish playwright, build a brilliant, elliptical confrontation between Sands (Michael Fassbender) and a Roman Catholic priest (Liam Cunningham) who tries to convince him a hunger strike is pointless. I'm not sure that's enough to make "Hunger" comprehensible as a chronicle of historical events. But as an immersive work of cinema that inevitably suggests more recent headline stories about famous prisons and the dire things that happen there, it's unforgettable. (In case you're wondering, yes, the oddity of having a film directed by someone named Steve McQueen and starring someone named Fassbender at Cannes has been widely observed.)

On Monday, the major premiere here was "Lorna's Silence," another minimalist drama about a harebrained criminal scheme from Jean-Pierre and Luc Dardenne, the Belgian filmmaking brothers (and two-time Palme d'Or winners). While the Dardennes are artistic heroes of the Francophone world, and their 2005 award-winner "L'Enfant" was a masterfully constructed and heartbreaking moral fable, this new tale of immigration, sham marriages, heroin and murder strikes me as an intriguing misfire. As usual, we're in Liège, the brothers' uncharismatic hometown, but they enter new territory with their title character, a pretty, plucky but ultimately inscrutable Albanian immigrant played by Arta Dobroshi.

"Lorna's Silence" proceeds through a series of tricky narrative revelations and switchbacks, the first coming when we realize that this likable and hardworking young woman, avidly saving money to open her own snack bar, is also involved with a low-rent local mobster (Fabrizio Rongione) in a conspiracy to murder her pathetic junkie green-card husband, Claudy (Dardenne regular Jérémie Renier). At first, Claudy's desperate efforts to get off smack produce nothing but pity and contempt in Lorna, whose real boyfriend is working various off-the-books jobs all over Western Europe. But then -- well, you know what happens next in movies about fake marriages, right?

Pushed by her shifting feelings for Claudy on one hand and by the evil mobster's scheme on the other, Lorna snaps back and forth in the winds of fate like a wayward kite until she snaps her string. The Dardennes' vision of downscale Liège is as intimate as ever -- or as intimate as an anonymous middle-Europe of bus stations, hospitals, laundries and postwar apartment buildings can get -- and the movie's mini-shocks are coolly effective. Dobroshi gives a brave and affecting performance, but there's something mechanistic and even cruel about "Lorna's Silence," which is more like a thriller than any previous Dardenne film, and correspondingly a lot less plausible. Whatever moral points it's trying to make about the underside of European affluence are uncharacteristically murky.

Nothing I've seen in Cannes has possessed and disturbed me quite as much as the Directors' Fortnight entry "Tony Manero," from young Chilean director Pablo Larraín. An American studio executive told me this morning that colleagues of hers had seen it and emerged violently angry. If that presumably is not the point of the film, it's nonetheless an accomplishment in which Larraín can take pride. Those people probably went to it, as I did, expecting one of those movies about how pop culture can help save your life -- and specifically, in this case, about how a middle-aged Chilean obsessed with impersonating the hero of "Saturday Night Fever" endures the Pinochet dictatorship of the 1970s. This is not one of those movies. If Larraín has an argument to make about the power of pop culture, it definitely isn't a positive one.

Here's how Raúl (Alfredo Castro), the corpse-gray, 52-year-old antihero of Larraín's film, endures the Pinochet dictatorship: By not giving a shit about anything or anybody other than his quest to become the leading Tony Manero impersonator on a third-rate Chilean variety show. (Unfortunately for him, the first time he shows up it isn't Tony Manero night, but rather Chuck Norris night.)

Raúl's detached, perfectionist demeanor conceals a pit of boiling rage and sociopathic desire. He becomes an incidental serial killer, piling up bodies as he tries to build a disco floor (out of chipped glass tiles and fluorescent strip lighting) in a scummy Santiago nightclub. There's a current of reckless, nihilistic black humor in "Tony Manero," which might just make it a candidate for international cult status. But only if you're the sort of person who understands that "Texas Chain Saw Massacre" is pretty funny too.