Are the Jews good for Barack Obama?

With Jewish voters critical in such swing states as Nevada and Pennsylvania, Republicans hope to exploit a supposed softness in Obama's support for Israel. So far, it's not working. 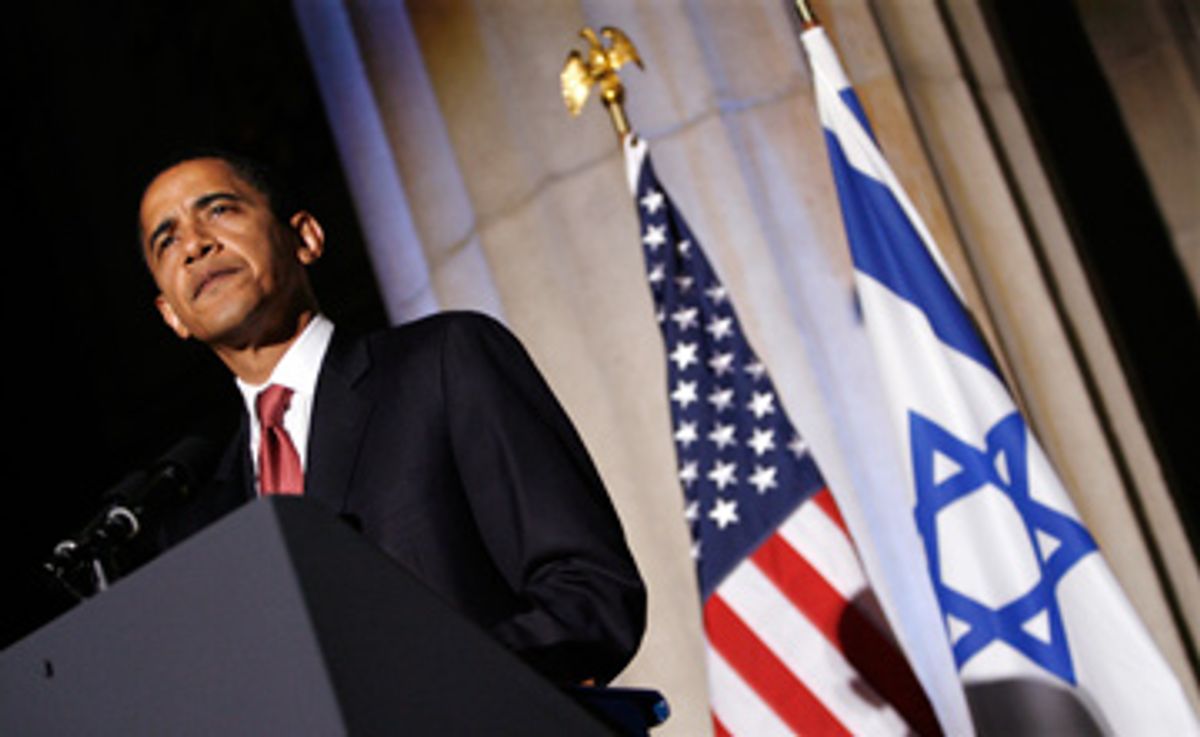 Some political attacks come in subtle forms, with a hidden, "dog whistle" message audible only to the voters who are supposed to hear it. And then there was President Bush's speech Thursday -- yes, the speech to Israel's parliament on the nation's 60th birthday in which he indirectly compared Barack Obama to both infamous appeaser-of-Hitler Neville Chamberlain and to a famous Nazi sympathizer.

By this point in his administration, it's clear that Bush is comfortable with unsubtle fear-mongering. But even by his standards, the point of that line -- and of the fury ginned up by House Republicans over an interview Obama gave to the Atlantic Monthly's Jeffrey Goldberg -- was pretty clear. The GOP is already pushing, and pushing hard, the idea that Obama has a problem with the Jewish vote, because of his proposals to sit down to negotiate with Iranian leaders who have threatened Israel, because of his former pastor's ties to Louis Farrakhan and (though most Republicans don't bring this up) because of false fears that Obama is secretly Muslim. Attacking Obama's Middle East policy while in Israel, and playing the Holocaust card in the process, plainly fits into that pattern, even if the White House spent most of Friday being shocked -- shocked! -- that anyone would think Bush meant to refer to Obama.

If Jews do flock to John McCain this fall, Obama would be in some trouble (assuming, of course, that Hillary Clinton doesn't win the nomination through a miracle more impressive than the one commemorated every year at Hanukkah); a strong majority of Jewish voters has gone Democratic in presidential elections since 1924. Jews have favored the Democrat in 21 straight presidential elections, and by an average margin of 3-to-1. In battleground states like Ohio, Pennsylvania and Nevada, the Jewish population is a large enough slice of the electorate that Obama can't afford for them to abandon him.

In Florida, Jews make up around 5 percent of the voting population -- more than enough to swing a close race. (If all the South Florida Jewish voters who intended to support Al Gore and Joe Lieberman in 2000 had actually cast their votes properly, Gore would have won.) Florida may be tipping from truly purple toward red; Bush won it easily in 2004 and the Republican governor, Charlie Crist, will work hard for McCain. But if the state is competitive again this fall, Obama can't afford to let McCain take a big share of Florida's Jewish voters, who turn out in disproportionately large numbers compared to their share of the state's residents. With an older population than the national average, Florida already poses demographic problems for Obama without losing a traditional part of the Democratic coalition.

Nationally, the problem for Bush, Boehner and, above all, McCain, is that right now there isn't much evidence of a lasting breach between Jewish voters and the presumptive Democratic nominee. By November, as the old saying goes, the Jews will most likely be good for Barack Obama.

For Republicans hoping to drive a wedge between Obama and Jewish voters, Israel is only the first stop. But it's a big one. The standard GOP line against Obama on Middle East policy is this: He wants to sit down with Iran and Syria, both sworn enemies of Israel; he didn't speak up loudly enough when former President Jimmy Carter, apparently a crypto-Obama supporter, met with Hamas leaders recently; he has listened to advice on foreign policy from people like Gen. Tony McPeak and Robert Malley, who some Jews believe don't support Israel strongly enough; and he was "endorsed" by a Hamas spokesman, who said his organization would prefer that Obama wins the election. Obama was also friendly with Columbia University professor Rashid Khalidi when Khalidi taught at the University of Chicago. The Arab-American Khalidi's criticism of Israel and advocacy for Palestinians has made him extremely controversial among hawkish Jews. "[Obama] has not taken appropriate leadership on any of these issues," said Suzanne Kurtz, a spokeswoman for the Republican Jewish Coalition. "If these are issues that are important to you, you really just find this alarming." The coalition, founded in 1985, has 30,000 members now, and is running ads in Jewish newspapers featuring Jewish Republicans who used to vote Democratic but switched over security concerns.

Of course, the most prominent person matching that demographic is Sen. Joe Lieberman, who has become one of McCain's most hawkish surrogates on foreign policy. "The fact that the spokesperson for Hamas would say they would welcome the election of Senator Obama really does raise the question why, and it suggests a difference between these two candidates," Lieberman told CNN's Wolf Blitzer last week. McCain himself picked up the same general theme after Bush's speech Thursday, telling a conference call with bloggers, "If Senator Obama wants to sit down across the table from the leader of a country that calls Israel a stinking corpse, and comes to New York and says they're gonna, quote, 'wipe Israel off the map,' what is it that he wants to talk about? What is it that [Obama] wants to talk about with him?"

Add to all that the months of controversy over the Rev. Jeremiah Wright, whose church once reprinted a column by a Hamas leader in its newsletter, and a series of e-mails that made the rounds of the Jewish community earlier this year alleging Obama is a Muslim, and you'd think McCain might actually have a chance at running away with lots of Jewish support this fall. "If people don't mind, I'd like to be honest -- a lot of the concern has been generated because of scurrilous e-mails that have been sent, generated based on speculation [regarding] the fact that my middle name is Hussein," Obama told Philadelphia-area rabbis at a meeting at a Center City synagogue before the Pennsylvania primary.

But a Gallup poll last month -- in the midst of the Wright drama -- found Obama beating McCain 61-32 among Jewish voters, a far wider margin than among the population as a whole. While that's lower than John Kerry's 76 percent margin among Jews (and 5 points lower than the 66 percent Hillary Clinton got in the same poll), Obama's campaign isn't worried about making up the difference by November. "If we're beating McCain 2-1 after 'Obama is a Muslim' scares and a month of Rev. Wright, then we're doing pretty well," one aide said.

Yes, Clinton has been beating Obama among Jewish voters in some primaries, but once the Democratic nomination fight finally ends, most observers of the Jewish community's political behavior expect him to consolidate support. In Chicago, prominent Jewish politicos like fundraiser Penny Pritzker, operative Abner Mikva and Rep. Jan Schakowsky signed on with Obama early in his campaign. Still, Obama's campaign appears to be taking the issue seriously, even though most Jewish voters live in safe blue states like New York, New Jersey, California and Maryland. Obama has been known to jokingly introduce himself to Jewish audiences as "Baruch Obama," using the Hebrew version of his Arabic first name.

On a national level, Obama doesn't have the long track record on Israel that McCain or Clinton has, but that's mostly because he doesn't have a long track record on foreign policy, period. "Senator Obama is not someone who has been familiar to the American Jewish community for decades," said Rep. Robert Wexler, D-Fla., an Obama supporter and one of Israel's most vehement defenders in Congress. "There are legitimate questions that should be asked and need to be answered ... (but) the more Senator Obama expresses himself as a staunch supporter of Israel, the more support he gains in the Jewish community." The largest pro-Israel lobbying group in the country, AIPAC, says McCain, Obama and Clinton all meet their approval. "All three candidates," said spokesman Josh Block, "have strong congressional voting records on issues important to the pro-Israel community and have demonstrated their commitment to the special relationship between the United States and Israel." AIPAC is nonpartisan, and won't endorse either McCain or Obama. But if the group felt that Obama wasn't sufficiently pro-Israel, you'd have heard about it.

That may be all Obama really needs to do about as well as most past Democratic candidates have done among Jewish voters. Observers of the Jewish vote say most Jews aren't really classic single-issue voters; if candidates can get past the basic question of whether they're pro-Israel or not, that's usually enough for voters to move on to other topics. "There are definitely some voters for whom Israel is an issue, but it's [one] issue among many," said an advisor to Obama's campaign on the Middle East and outreach to Jewish voters. Wexler, the campaign's chief surrogate for appearances in the Jewish community, agreed. An Orthodox Jew, he represents a South Florida district that he claims has more Jewish constituents than any other. "If the Republican Jewish Coalition believes that large numbers of Jewish people are uni-dimensional, they apparently do not interact very much with Jewish people."