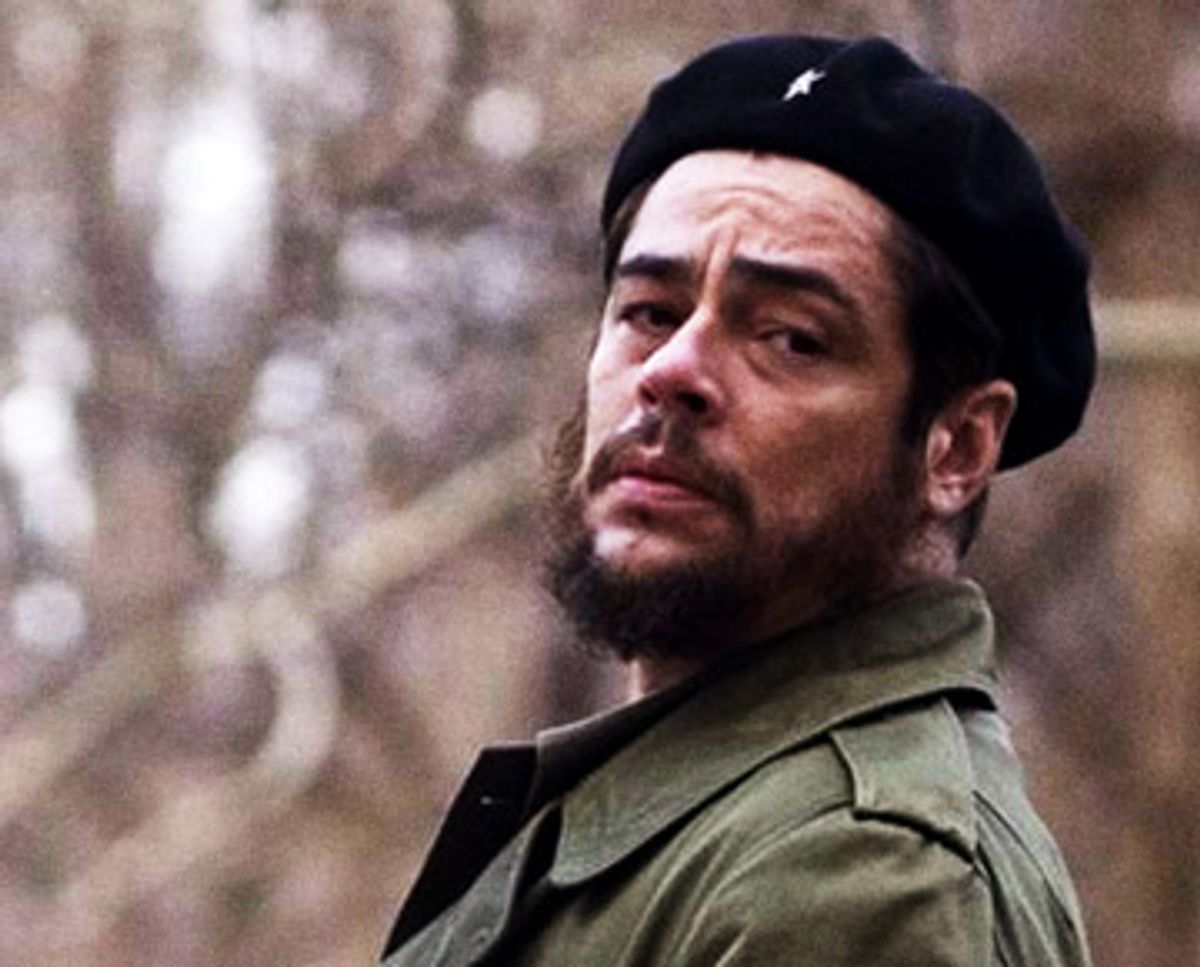 CANNES, France -- Nothing at this year's Cannes Film Festival has been awaited with such commingled dread and anticipation as the premiere of Steven Soderbergh's four-hour, two-headed Che Guevara biopic, screened here as a single competition entry even though Soderbergh has always intended it to become two different movies. And so it happened that on the first genuinely warm and sunny day since the festival opened, the press corps dragged its collective ass into the Théâtre Debussy at 6:30 on a lovely Mediterranean evening, and did not emerge until 11. We fortified ourselves with smuggled croissants and candy bars, with last-minute demitasses of espresso and bottles of water (but not too much of either, of course).

And you know what? It was totally worth it. By the time we got to the 15-minute intermission and discovered that the festival had prepared sandwiches for us, served in brown paper bags emblazoned with the film's logo, it already felt like a special, only-in-Cannes event. Whether it's one movie or two, "Che" clearly isn't finished. It was shown here with no opening or closing credits, only a few crude digital intertitles ("NEW YORK 1964") that looked as if they'd been slapped on an hour earlier. As with seemingly every movie in this Year of Mixed Emotions at Cannes, reactions to the screening were all over the map; nobody in the group of critics I ate dinner with was entirely sure what he or she thought.

The Cannes "Che," probably a film no one will see again, is a big, sprawling, ambitious mess. It's less a grand-opera mess than a beautifully constructed machine whose parts don't all quite work together. I was never bored, in four hours-plus. Whether or not it ends up becoming a great film (or films), this is miles and miles beyond anything I thought Soderbergh could create from this material. He joked at Thursday's press conference that he had warned the dozens of actors in his cast that this huge production required him to stay on time and on budget, and he wasn't likely to spend time talking about character back-stories or holding their hands. More directors should work that way, if you ask me. He also spoke of his admiration for Walter Salles' "Motorcycle Diaries," and said that, with these films, "Now there's a trilogy."

Although Benicio del Toro provides a marvelous physical and emotional performance as the asthmatic Argentine doctor who became Latin America's most legendary revolutionary since Simón Bolívar, del Toro's Che is not a character we completely understand, at least not in the psychological-realist mode of most motion pictures. He is sometimes warm and sometimes cruel, often dogmatic and occasionally witty, a brilliant strategist and tactician of guerrilla warfare who made crucial mistakes leading to his death. (I should quiet one widespread fear about this film by noting that it's almost entirely in Spanish, which required arduous study by some of the cast.)

Soderbergh makes no effort to resolve Che's contradictions, or to define him conclusively as either a hero of liberation or a supporter of tyranny. This is cinema emulating the naturalistic novel, or historical reporting; "Che" gives us the upward trajectory of a man who led a successful revolution, and the downward trajectory of a man who died fighting a failed one. You could say that Soderbergh humanizes an iconic figure, but he humanizes him exclusively as a public figure and man of action. Guevara was also a practicing physician, an intellectual who wrote books and articles, and the father of five children. Those aspect of his life and career are visible only as tiny snippets of background.

In the two hours we watched before eating sandwiches (presumably the film that will be called "The Argentine"), Soderbergh leaps back and forth through the 1950s and '60s, from scenes of the young Guevara and Cuban exile Fidel Castro (Mexican actor Demián Bichir) in Mexico City as they plan a revolution to black-and-white faux-newsreel footage of Guevara's famous 1964 visit to New York as a Cuban government minister, where he attended high-society parties and spoke at the United Nations, advocating revolution throughout Latin America. We hear excerpts from that speech, but not its most inflammatory lines: "Imperialism considered us a weak and submissive flock; and now it begins to be terrified of that flock; a gigantic flock of 200 million Latin Americans in whom Yankee monopoly capitalism now sees its gravediggers."

In between those points in time, Guevara and Castro traveled to Cuba on board a leaky boat called the Granma and launched a laborious and painfully small insurgency against dictator Fulgencio Batista, from their base in the Sierra Maestra mountains, that would transform Latin American politics for decades to come. The nuts and bolts of this improbable victory -- how it happened, if not quite why -- is the meat of this first film. There have already been protests directed against "Che" because Soderbergh does not depict Guevara's leadership of the revolutionary tribunals that executed hundreds of old-regime Cubans after the revolution. But anyone who watches this movie with an open mind will see that everything Che and Castro did later, from the undoubted social progress of their new regime to its increasing totalitarianism and intolerance, from the self-righteousness of both men to their convenient blindness to the evils of Soviet and Chinese communism, was already present when they were struggling guerrillas in the mountains.

I think Soderbergh presents the story bravely and honestly, hewing closely to factual reconstruction, and that pro-Che and anti-Che viewers will see the movie in different ways. This central section of the first film is also a dynamite, fluidly constructed war film, which excitingly captures the inexorable turning of the tide as the guerrillas launch ever more daring attacks against Batista's forces, who despite far superior arms and American aid rapidly lose their will to fight for a corrupt regime. After the battle of Santa Clara on the last day of 1958, a classic example of Che's brilliant tactics and near-suicidal daring, the Batista government evaporated overnight.

Soderbergh leaves Che on the road to Havana in January 1959 at the end of the first film, and when we meet him in the second he has become an international mystery man of revolution, some seven years later. Guevara abruptly disappeared from Cuba in 1965, and began a James Bond-style global peregrination, leading a failed rebellion in the Congo and visiting Mozambique (where local insurgents apparently rejected his help) before setting up a Cuban-funded guerrilla camp deep in the Bolivian jungle.

This second section of "Che" (presumably "Guerrilla") is far less showily cinematic than "The Argentine," but it's more intense and has more forward momentum. Leading an embattled force of just a few dozen revolutionaries, most of them foreigners, Che made one miscalculation after another. Without knowing it, he was facing an elite detachment of U.S.-trained Bolivian special forces, inaugurating another unsavory Latin American trend that continues to this day. "Guerrilla" is something like "The Argentine" translated into the hostile Bolivian highlands and run in reverse. Instead of embracing Che's revolution, the local peasants reject it (few if any guerrillas spoke the local language, an issue that doesn't come up in the film). Instead of drawing in new recruits week after week, Che's ragged band gets constantly smaller as his fighters are killed or wounded, fall ill, or simply run away.

The universe of this second film is a constantly diminishing one as the guerrillas are surrounded and the inevitability of death or capture draws near. The joyful zeal of the Cuban revolution dwindles to a pointless, dirty bloodbath and then to a single point as Guevara, shot through the leg, is taken prisoner and brought to the abandoned schoolhouse in a village called La Higuera, where he spends his last hours. Chicago-based Polish critic Zbigniew Banas told me after the movie that there's something about this story of failure and death that transcends narrow questions of politics and ideology, perhaps something existential. I think he's right, but it's difficult to describe.

What Soderbergh has sought to capture here is a grand process of birth and extinguishment, one that produced a complicated legacy in which John McCain, Barack Obama and Raúl Castro are still enmeshed. There will be plenty of time to argue about the film's (or films') political relevance or lack thereof, to call Soderbergh names for this or that historical omission, for this or that ideological error. He's made something that people will be eager to see and eager to talk about all over the world, something that feels strangely urgent, something messy and unfinished and amazing. I'd be surprised if "Che" doesn't win the Palme d'Or (remember, Sean Penn is the jury president), but be that as it may, nobody who saw it here will ever forget it.