She's in it to spin it

Hillary Clinton's goal is to come out of the primaries with a popular-vote lead over Barack Obama. Any questions? 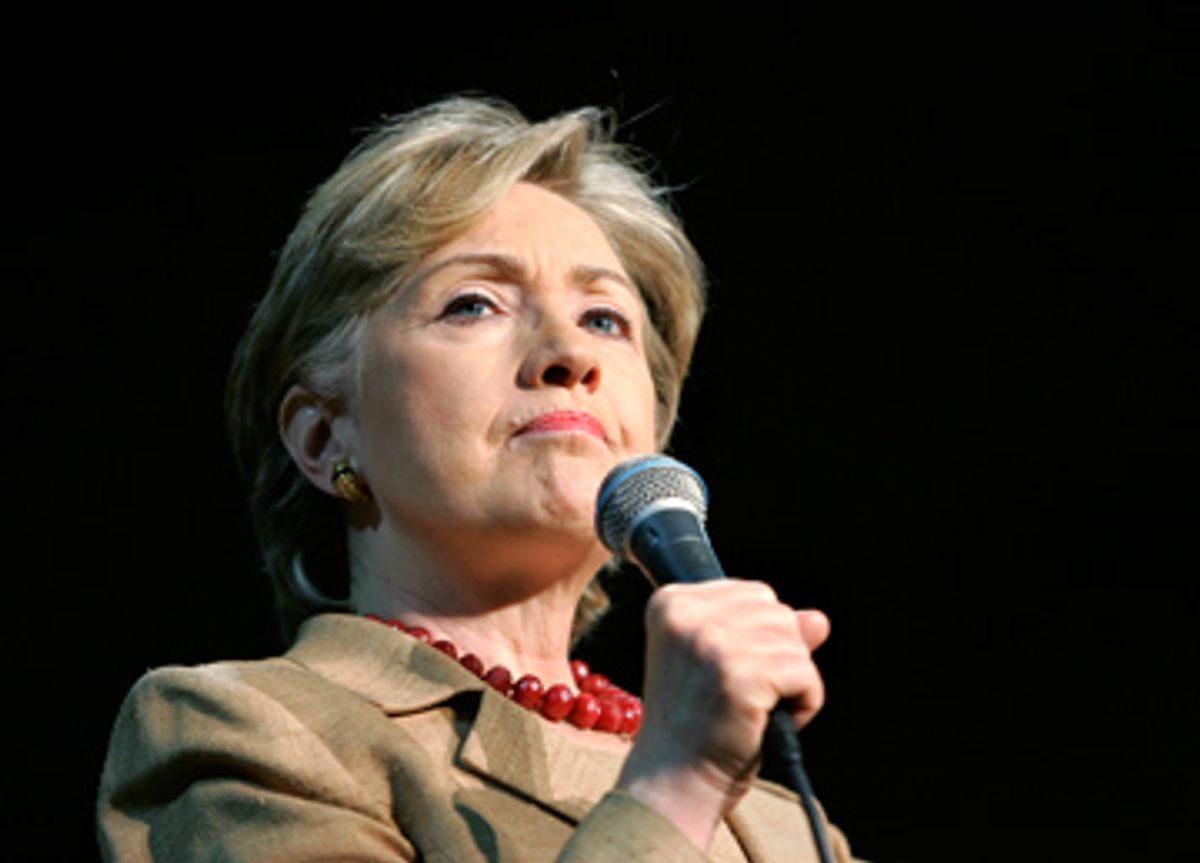 The Tuesday night story line never varies: Hillary Clinton wins a primary (Pennsylvania, Indiana, West Virginia and Kentucky) and then, bizarrely enough, continues to behave as if she were a realistic candidate for president. Instead of bowing to the inexorable arithmetic of Barack Obama's delegate lead, she takes comfort in more ephemeral numbers like her 250,000-vote victory margin in Kentucky.

Early in her first-lady years, Clinton described herself as "a Rorschach test." But right now the image embedded in the ink blots is as perplexing as it has ever been. There are those who see Clinton staying in the race out of ill-concealed ambition -- whether it is a ploy to become Obama's indispensable running mate or to lay the groundwork for an I-told-you-so 2012 campaign. Others go to the opposite extreme in theorizing about her delusion, denial or even wanton destructiveness.

But what if -- for the sake of argument -- Clinton is merely doing what she always said that she intended to do, which is to scrap for every last delegate through the final primaries? What if she is actually moved by the you-go-girl enthusiasm she encounters hand-shaking her way along all the rope lines? What if she looks at the electoral map and broods about Obama's potential difficulties in November in Ohio, Pennsylvania and Florida (all states that Clinton carried in the primaries)?

Offering such bland explanations is not going to win anyone points for cleverness at a dinner party nor prompt a return invitation as a cable-TV talker. But sometimes the trite is true. And these factors do have the virtue of explaining Clinton's dogged determination to continue ever since the nomination spun out of her grasp with Obama's ferocious march through the mid-February primaries and caucuses. Since that winter wipeout, Clinton has won seven of the last 10 primaries and beaten Obama by a little more than 500,000 votes. But through it all, she has been practicing one-day-at-a-time politics, with any semblance of advance planning deferred to the dictates of daily crises.

These days, Hillary is in it to spin it. Her goal is to come out of the primaries (which end June 3 in South Dakota and Montana) with a popular-vote lead over Obama after toting up all the primaries. While this is an entirely symbolic benchmark (as is Obama's claims to a majority of pledged delegates), it now seems attainable post-Kentucky. A Puerto Rican landslide June 1 (a territory where 2 million voted in the 2004 gubernatorial election) would probably give Clinton the lead in primary votes cast, even without counting the results from the Michigan and Florida primaries conducted in defiance of party rules.

Of course, there is an element of "how many angels can dance on the head of a pin" argumentation here. Do you count verifiable caucus results from states like Iowa? Do you include Florida (where a record 1.7 million Democrats voted) and exclude Michigan (where Obama's name was not even on the ballot)? The mind reels from the possible statistical variables here. But Clinton is now almost certain to end the primaries with a glimmer of an argument to legitimacy, even if Obama ends up tantalizingly close to the 2,026 delegates (not counting Michigan and Florida) needed to lock down the nomination.

It is not much of a strategy -- and it is hard for the Clinton spin team even to maintain it with a straight face -- but it is hers. In theory, Clinton could gain at least 56 delegates on Obama if the Democratic National Committee's Rules and Bylaws Committee votes May 31 to seat the disputed Michigan and Florida delegations. But even a total victory for Clinton at the DNC meeting (which could be appealed to the Denver convention by the Obama forces) would amount to little more than a stay of execution. You can virtually mark it on your calendars: Sometime in the week after the June 3 primaries Obama is going to go over the top by legitimately claiming a majority of convention delegates.

Still, even the most realistic residents of Hillaryland take comfort in the continuing delays in officially heralding the Age of Obama. They are adept at noticing the qualms before the storm. If, for example, Clinton were merely a "spoiler" candidate, then why are more than 200 superdelegates still on the fence? True, some are timid politicians reluctant to antagonize either the Obama or Clinton camps by taking sides. But others appear to be genuinely, if quietly, nervous about the party's prospects with Obama at the top of the ticket. According to the exit polls from Kentucky, a state that Bill Clinton carried twice, Barack Obama won the votes of only 22 percent of white Democrats. Obama may be the all-but-certain nominee, but he is not winning the race with a dramatic closing kick.

So, buckle up, we have -- at minimum -- another two weeks of Obama being shadowed by Hillary Clinton. For despite the snarkiness of the press and the grumbling of some Democrats worried about long-term divisiveness in the party, Clinton takes comfort that her campaign is still intact. No prominent supporter like Govs. Ed Rendell (Pennsylvania), Jon Corzine (New Jersey) and Ted Strickland (Ohio) or Indiana Sen. Evan Bayh has in public counseled retreat. The New York finance team for the most part is glum but remains loyal. And whether it is pollster Geoff Garin, former Democratic national chairman Terry McAuliffe or communicator-in-chief Howard Wolfson, the Clinton team is still able to offer up campaign surrogates willing to rattle off talking points on television.

Maybe the morning after the June 3 primaries, Hillary and Bill Clinton will realize that it is finally time to pull the curtain down on the road show called "Return to the White House." Maybe the entire Hillary spin team will be afflicted by a mysterious epidemic of laryngitis. Maybe the former first couple will be convinced to quit by quiet advice from people whose loyalty and discretion is beyond question -- counselors like campaign manager Maggie Williams, lawyer Vernon Jordan and strategist Harold Ickes.

But, for the moment, Hillary Clinton -- Democratic candidate for president -- is still too busy campaigning to contemplate her next step. After all, she may still hope: Last week West Virginia, this week Kentucky -- and next week, the world.