"Indiana Jones and the Kingdom of the Crystal Skull"

Steven Spielberg's beloved adventure series has built its own Temple of Hype -- but the latest installment manages to surprise and delight. 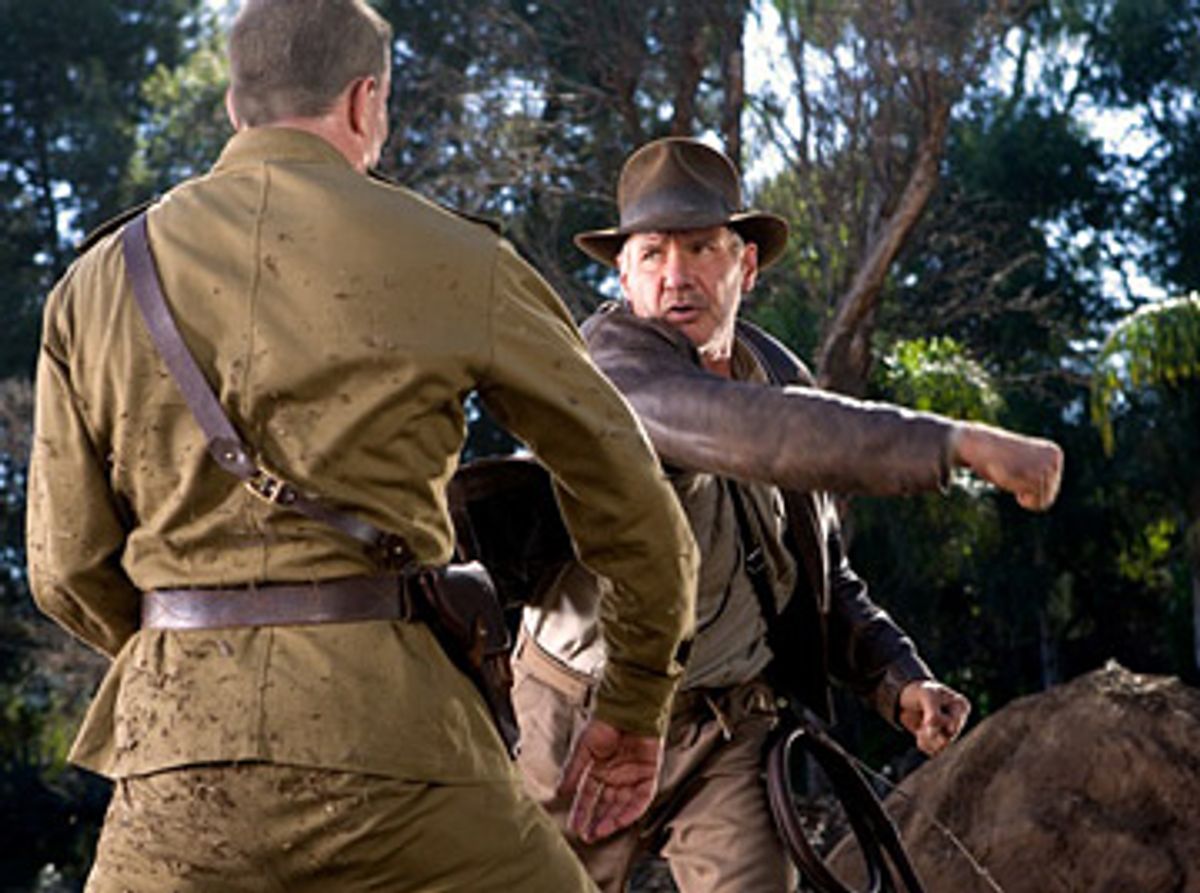 A few months back, just before the release of George Clooney's "Leatherheads," I happened to be standing near a poster for the movie in a New York City subway station. A young man, who looked to be in his 20s, walked up and, after spending a few seconds surveying the image of Roaring Twenties football players in their quaint get-ups -- aliens from another world -- said to his girlfriend, a little wistfully, "I don't know why, but I want to see this."

The idea of being drawn to a movie and not knowing why is practically lost in the contemporary moviegoing experience, at least when it comes to mainstream Hollywood pictures. We're so conditioned to feel excitement over the new Spider-Man movie, the new Batman movie, the new Judd Apatow-produced movie, that the idea of walking up to an interesting-looking poster in a subway station and thinking, "Now this might be something," is almost unthinkable.

It's completely unthinkable in the case of "Indiana Jones and the Kingdom of the Crystal Skull," the fourth installment in Steven Spielberg's rabidly beloved adventure series, which has been building its own Temple of Hype for several years now. But the strange thing about Spielberg's latest is that, for me at least, it miraculously pulled off the effect of feeling like a surprise: The picture both fulfilled some vague, unexpressed hopes I didn't know I had and also left me with the sense that I'd just seen something I wasn't quite prepared for -- the kind of contradiction that great showmanship can bridge. In a movie climate that seeks to promise bigger, bolder thrills, "Crystal Skull" daringly offers less, in the sense that it gives us action sequences that rely on visual logic rather than lots of fast cutting; its computer-generated effects are used with relative judiciousness; and it features human faces that actually look human -- in other words, they belong to people who have aged, visibly, with the rest of us. "Indiana Jones and the Kingdom of the Crystal Skull," made by a man who's amassed a great deal of money exploring the dreams and fears of childhood, and featuring a one-time action hero who's now in his 60s, is an adventure about the inevitability of adulthood -- but if you put that on a poster, almost nobody would come.

The "Indiana Jones" pictures, based on characters and stories created by George Lucas, were inspired by '30s movie serials that were old-fashioned even by the time of Spielberg's '50s boyhood, and the party line on the series is that it stems from Spielberg's unflagging obsession with lost childhood -- anyone's lost childhood. But even if "Indiana Jones and the Crystal Skull," like its predecessors -- the most recent of which was "Indiana Jones and the Last Crusade," released 19 years ago -- harks back to a past that Spielberg didn't live firsthand, the nostalgia it's selling isn't the smug, self-satisfied sort, but a more melancholy variety: Now that we live in the future, there's nothing to look forward to -- even rocket ships have become passé. Why not resurrect a hero who spends his time delving into the earth for ancient -- and, in this case, otherworldly -- artifacts? For Spielberg, the only way to get back to the future is by digging into the past.

"Crystal Skull" is set in 1957, 19 years after the close of the last installment in the series, and Indiana Jones -- just like Harrison Ford, the actor who plays him -- is 60-ish and vaguely creaky. Indy's old enemies the Nazis, so reliably evil they'd become as comfortable as house slippers, have been effectively vanquished. But there are new enemies waiting to take their place, specifically a team of Soviet operatives led by a ball-buster in a Buster Brown haircut: Her name is Irina Spalko (Cate Blanchett, in a marvelously purring, stylized performance) and she's keenly interested in a crateful of contents that the U.S. government has been keeping under top-secret wraps in a Nevada warehouse. Whatever's in this crate -- I won't tell you what it is -- is linked to the other, more important thing Irina and her countrymen are seeking, which happens to be the special crystal skull of the movie's title. Never mind that the thing, when we finally see it, looks like a coffee-table gewgaw stuffed with aluminum foil; it holds the secrets of the universe -- what Cold War hussy worth her weight in rubles could resist that?

Irina and her henchman collar Indy and his sidekick, Mac (Ray Winstone, in a sadly underdeveloped role), to help them find the mysterious wooden box they're after, which is just one of many similar containers stacked floor to ceiling in that Nevada warehouse. They finally get what they want, leaving behind a mess of debris and smashed crates -- one of which, in the movie's slyest visual joke, contains the Ark of the Covenant, the precious MacGuffin of the first movie, a gleaming gold treasure that's been cast aside as if it were yesterday's news, because, after all, it is.

After his escape from the Russians, Indy returns to his home, and his teaching post, in a leafy New England town, but there's trouble there too: Because of Indy's knowledge of the thingie-in-the-crate, the FBI has insisted on ransacking his files and forcing him out of his job. If he's an American hero, he's also one who can't trust his own country: As the dean of the college, Indy's close friend Charles Stanforth (Jim Broadbent), laments, "You have reason to question your friends these days."

Just as Indy is about to leave town, he's accosted by a greaser kid who glides into the picture on a motorcycle, à la Marlon Brando in "The Wild One" -- which makes no sense unless you accept that the cell walls of "Crystal Skull" are permeable, allowing the shadows of characters to wander from one movie to the next. The kid's name is Mutt (Shia LaBeouf), and he needs Indy's help in locating a man he considers a father figure (who turns out to be John Hurt in a rough cloth serape, but let's not get ahead of ourselves). That fellow also happens to be one of Indy's former colleagues, and so Indy agrees to help Mutt in his quest. The rest of "Crystal Skull" involves a trek to Peru in search of -- what else? -- a long-lost kingdom, as well as Indy's reunion with his old flame Marion (Karen Allen), from "Raiders of the Lost Ark." And Irina continues to slink through the picture like a leopard goddess.

Some have already proclaimed "Indiana Jones and the Crystal Skull" a tired sequel; what's more remarkable to me is how unjaded it is. It's the most tender, warm-spirited and entertaining picture Spielberg has made in years, and I say that as someone who's regularly rejected the whatever-it-is that Spielberg is often trying to sell: There are Spielberg pictures that I love ("E.T.," "Jaws," "Schindler's List") and others I despise, like his delusional work of sci-fi craftsmanship "War of the Worlds," which I consider one of the ugliest, most mean-spirited pictures of the decade. Spielberg is an extraordinary craftsman, but he's not a great thinker, and when he tries to stuff big ideas into his movies -- as in "A.I. Artificial Intelligence" or "Munich" -- his point of view is never quite clear, maybe because he doesn't really know what he thinks. His ideas tend to be blurted out in signposts along the lines of "War is hell" and "Revenge gets you nowhere." He knows, cannily, how to make movies work as you're watching them; but I've found that many of Spielberg's movies disintegrate in my mind not long afterward. They may be built to last, and still, they break down.

But at his best, Spielberg is certainly capable of tapping, to almost unnerving degree, collective moods and fears and longings, both emotional and cultural. I don't think of Spielberg as any sort of savior of contemporary cinema: He is, after all, an executive producer of the "Transformer" movies. But "Indiana Jones and the Kingdom of the Crystal Skull" -- its smart script is by David Koepp, and it was shot in muted, suedelike tones by Janusz Kaminski -- is so beautifully made, and so full of inventive, delightful touches, that it feels like a manifesto, as if Spielberg were taking a stand against the crap we're so often forced to sit through. At one point, Mutt and Irina engage in a sword fight atop parallel moving trucks -- this isn't a new idea, but Spielberg makes it look fresh and vital.

LaBeouf is appealing enough in "Crystal Skull"; he sensibly keeps his performance as low-key as possible, which you need to do when you're acting with Harrison Ford. Ford has never been a particularly expressive actor, though he has often managed to give sturdy and nicely understated performances in spite of it. Now, more than ever, he has the face of a tiki god -- yet he seems more expressive rather than less, particularly in his first scene with Allen. When he sees her, his face shows what can only be described as pure delight, and it's little wonder: Allen, an actress of a certain age who isn't afraid to look like a real person, is radiant here. Her performance is like joy let out of a box.

"Indiana Jones and the Crystal Skull" also contains one of the most grimly funny sequences I've seen in years. Indy has just escaped from the Russians, and he heads, with obvious relief, toward a small town, the kind of place where freshly washed sheets and towels, stretched out on clotheslines, flap in the breeze like friendly flags. He dashes into one house, looking for help, and finds a family parked in front of the TV set. (The show is "Howdy Doody," with its sinister-cheerful theme music.) Only this isn't a real family -- its people are made out of plaster, like department-store dummies. Indy realizes he's stumbled into a fake town that's been set up by the government for a nuclear test, and he scrambles into the family refrigerator (comfortingly, the legend on its door reads "lead lined"), hunkering down for the inevitable blast.

That refrigerator keeps Indy safe from radiation. But is he safe from his own country? Spielberg floats the question without ever attempting to answer it. He doesn't have to. The sequence suggests that even Spielberg knows the limits of nostalgia: Here, he literally explodes our collective fantasies about American family life in the '50s. Indiana Jones is a hero precisely because he's so skeptical of the perceived comforts of that life: He'd much rather travel the world, maybe alone or perhaps with a partner or two, digging up secrets. "Indiana Jones and the Kingdom of the Crystal Skull" is a mainstream family blockbuster about the allure of the solitary, unconfined life. That's not a contradiction in terms. That's showmanship.