He'll be releasing everything about his repeated cancer surgeries. But he won't release his psychiatric records, which hold clues to the effect of his Vietnam captivity. 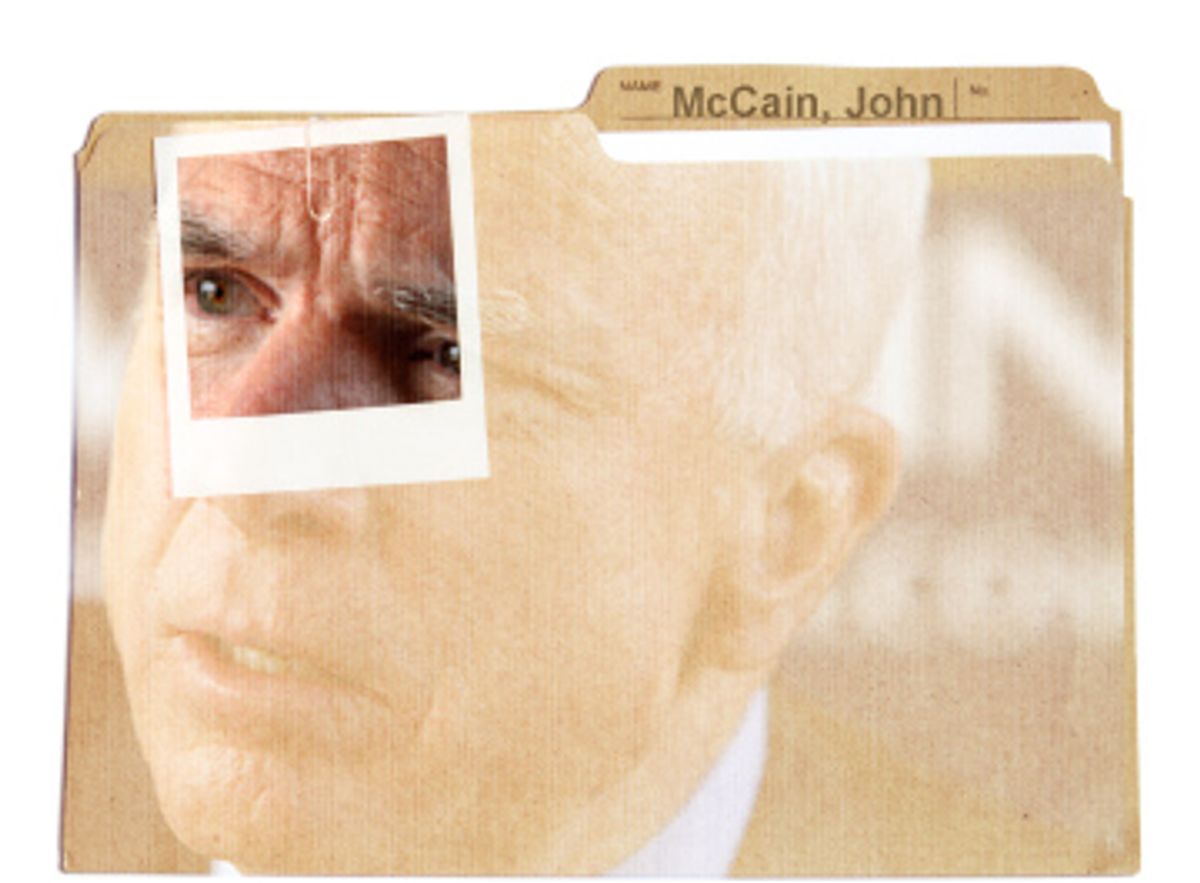 Presidential candidate John McCain has survived three plane crashes, four melanomas, and more than five years as a prisoner of war in North Vietnam, enduring torture and solitary confinement. There would be questions about his health and his fitness for the office he seeks even if he weren't turning 72 in August, and even if he weren't likely to be running against a man 25 years his junior.

On Friday, after repeated pledges to do so going back more than a year, the McCain campaign is set to release new information about the Arizona Republican's health history. The release, according to the campaign, will cover the year 2000 forward, a period when McCain had three of his four skin cancers removed, as well as lymph nodes and part of a salivary gland. It will not, however, include McCain's psychiatric records, which McCain allowed a select group of reporters to examine in 1999 but have never been released to the public. The new information is unlikely to quash recurring questions about McCain's age, his bouts with cancer, or how his experience in Vietnam may have affected his mind.

The most famous of McCain's physical ordeals began when a SAM missile knocked his A-4E Skyhawk out of the sky above Hanoi on Oct. 26, 1967.

By then, McCain had already survived three other harrowing incidents involving airplanes (not counting the time he snapped some power lines in Spain by flying too low). Soon after graduating from the Naval Academy in 1958, McCain's plane dove into the water near Texas. Knocked unconscious, he woke up as the aircraft settled on the bottom and he swam to the surface. McCain ejected from another plane near the Maryland coast in December 1965 when the engine died. McCain was also lucky to escape with his life on July 29, 1967. He was sitting in the cockpit of his A-4E Skyhawk on the deck of the USS Forrestal off Vietnam when a missile on another plane accidentally discharged, striking his plane. He dove out of the cockpit through flames. Fire engulfed the Forrestal, nearly sinking her, and killing 134 men. McCain was hit with shrapnel in the legs and chest, but recovered.

Less than two months later, McCain was shot down during a mission over Hanoi. He ejected from the cockpit, breaking his right knee and both arms. Dragged from a lake by an angry crowd, he was bayoneted in the ankle and groin. Today McCain suffers from arthritis in his shoulders and knee, his records show, and he may need joint replacement surgery.

During the five and a half years of captivity that followed, McCain was held in solitary confinement for two years straight, inflicting psychological strain the senator has described as worse than a beating. He memorized the names of POWs, details of guards and interrogators and reconstructed books and movies in his mind. "It's an awful thing, solitary," McCain wrote in "Faith of My Fathers," his 1999 memoir. "I had to carefully guard against my fantasies becoming so consuming that they took me to a place in my mind from which I might fail to return."

What were perhaps McCain's darkest hours came in the summer of 1968, during three days of nearly continuous beatings and torture with ropes that left him in an interrogation cell with a broken arm, cracked ribs, broken teeth and lying in a puddle of his own blood and waste. He gathered enough strength to stand on a waste bucket and try, twice, to hang himself with his shirt. Both times guards disrupted his suicide attempts.

During McCain's first White House run, his unsuccessful battle with George Bush for the Republican presidential nomination in 1999 and 2000, he faced a whispering campaign from rivals that suggested his Vietnam ordeal had permanently damaged his psyche -- specifically, that his famed outbursts of temper might be a sign of something serious, like post-traumatic stress disorder.

It is well documented that the sort of treatment McCain endured can harm the mind. A 1989 study in the Journal of Nervous and Mental Disease, one of many studies on the subject, showed that a third of American World War II prisoners of war met diagnostic criteria for PTSD fully 40 years after their release.

In 1999, McCain responded to the questions about his mental health by allowing selected reporters to peruse 1,500 pages of his health records dating back to his release from Hanoi in 1973. Reporters were not permitted to photocopy any of the documents. The reporters who looked at the records did not describe any mention of a PTSD diagnosis. However, they failed to note that it would have been impossible for McCain to receive such a diagnosis -- since the term "post-traumatic stress disorder" was not in use until seven years after McCain's release from captivity. The term first appeared in the American Psychiatric Association's Diagnostic and Statistical Manual of Mental Disorders in 1980.

There are behaviors associated with the candidate that would be consistent with a diagnosis of PTSD. Author Robert Timberg mentions McCain's intense explosions of anger --- a hallmark sign of lingering mental trauma from war -- in his book "John McCain: An American Odyssey." Timberg describes the episodes as "an eruption of temper out of all proportion to the provocation." Timberg, who McCain has said "knows more about me than I do," wrote that McCain's sudden fury is a result of Vietnam coming "back to haunt him." McCain has himself described having an adverse reaction to the sound of jangling keys, which reminds him of his Vietnam jailers. McCain also told doctors that during solitary confinement he had strayed pretty "far out" and had referred to himself as "mentally deteriorating."

But had the term "PTSD" been in use in the mid-1970s, there is no evidence to suggest that the doctors examining McCain would've used it. Their overall statements on his mental health were positive, echoing McCain's own assertion in "Faith of My Fathers" that he was not diagnosed with PTSD or any other mental condition. One psychiatrist who treated McCain when he returned from Hanoi in 1973, Dr. P.F. O'Connell, wrote in his records that the Navy pilot had "adjusted exceptionally well to repatriation," with an "ambitious, striving, successful pattern of adjustment." Psychological tests, said O'Connell, supported this assessment.

At the time, the campaign also released a statement by Dr. Michael M. Ambrose and Dr. Jeffrey L. Moore of the Robert E. Mitchell Center for Prisoner of War Studies, where McCain underwent a series of psychological tests and examinations between 1973 and 1993. "Senator McCain," the doctors wrote, "has never been diagnosed with or treated at the center for a psychological or psychiatric disorder. He has been subject to an extensive battery of psychological tests and following his last examination in 1993, we judged him to be in good physical and mental health." In a phone interview with the Associated Press, Ambrose said, "He had a very healthy way of dealing with his experiences."

McCain himself believed that he'd gained some psychological benefit from surviving the ordeal. McCain had been a mediocre officer and a notorious Navy troublemaker with a playboy image. But during his crucible in Vietnam, McCain "learned more about himself, about others," O'Connell wrote. He added that the Navy pilot "felt that he had profited by his experience and had changed significantly." An examiner even noted that McCain had improved his ability to control his famous temper via his ordeal.

Enduring captivity also gave McCain another apparent psychological gift: a feeling of credibility. It finally allowed him to escape the shadow of his father, Jack, a four-star admiral who commanded the entire Pacific theater during Vietnam. "Although proud of his father, he has been preoccupied with escaping being in the shadow of his father and establishing his own image and identity in the eyes of others," O'Connell wrote on McCain's return from Vietnam. "He feels his experiences and performance as a POW have finally permitted this to happen." A 1979 doctor's note in McCain's records described this dynamic as "Oedipal rivalry."

Psychiatrists who have studied prisoners of war say it is possible for a former POW to benefit significantly from imprisonment. A 1980 study of former Air Force POWs from Vietnam by a psychiatrist, Dr. William Sledge, documented how some prisoners experienced "an increased interest and sensitivity to interpersonal relationships, and altered values about career and the culture at large." That study noted that "Some POWs perceived these beneficial aspects as outweighing the disadvantages."

However, the same psychiatrists note that despite any perceived positive effects of imprisonment, the POWs also battled ghosts. "It is for all of those guys a life-changing experience," said Sledge, now at Yale-New Haven Psychiatric Hospital. "So many of them told me in my interviews that they had benefited from it." But Sledge added that some of the same former POWs simultaneously suffer some negative mental consequences. "These things seem to be operating on different tracks within the human mind."

Even if McCain has put questions about his mental health behind him, on Friday his doctors are likely to get a grilling from the press about his fight with cancer. According to McCain, all of his melanomas, including a fourth on his nose in 2002, were reportedly removed successfully before spreading. While melanoma is the deadliest form of skin cancer, it is highly treatable when caught early. In August 2000, it took doctors nearly six hours to remove two malignant melanomas on McCain's left arm and left temple, as well as lymph nodes in his neck and part of his salivary gland, apparently as a precautionary measure. Eight years later, a long scar is still visible on the left side of his face, starting at his temple. By all accounts, McCain's doctors watch his skin closely and the senator is famously shy of the sun and dutiful about applying sunscreen.

The melanomas removed in 2000 were Stage IIa. Stage IV is the most serious category. Survival rate for State IIa melanomas 10 years after diagnosis is 65 percent. The longer the patient survives, the better the prognosis becomes. Because McCain has survived more than five years already, the likelihood of the cancer's return has fallen to 14 percent, and the incidence of death is projected at 9 percent.

The fact that McCain feels pressured to allow reporters to interview some of his doctors on Friday shows that he is on the defensive about his age and his health and it is going to be an issue that will occasionally knock his campaign off message. "It takes up media space," said Christopher Gelpi, a political science professor at Duke University.