John Cusack talks about his new film "War, Inc.," a nightmarish satire about waging an outsourced war in the Middle East. Wait, isn't that happening? 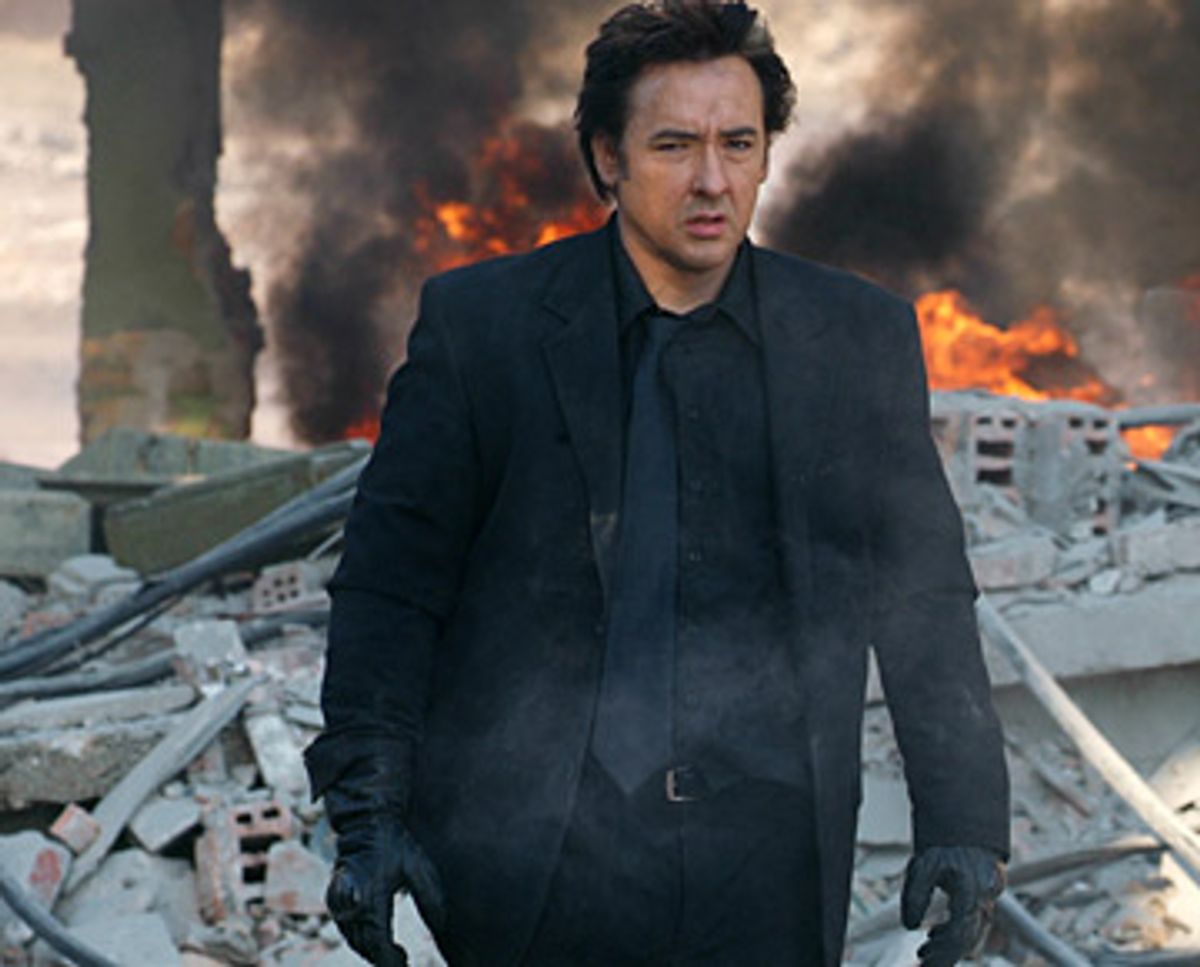 John Cusack has long been one of the film industry's most outspoken personalities. Before his new satire "War, Inc." was even completed, he spent a day calling reporters to talk about what he saw as the urgent political issues underlying the film. As he told me, "War, Inc." is set just a hair into the future, when the American fetish for outsourcing all government functions to private industry has been pushed to an illogical extreme: an entirely privatized Middle East war.

An actor with tremendous technique and comic timing, Cusack has played a sequence of off-kilter characters in both Hollywood films ("Must Love Dogs," "Runaway Jury") and indie efforts ("Being John Malkovich," "High Fidelity"). He's gradually been moving into more prominent off-camera roles. "War, Inc." is his third film as a writer or co-writer (after "Grosse Pointe Blank" and "High Fidelity") and his eighth as a producer or executive producer. While this film was directed by Joshua Seftel (and co-written with novelist Mark Leyner and "Bulworth" screenwriter Jeremy Pikser) you get the feeling that Cusack's directing debut can't be far off.

So I gather "War, Inc." is a satire about something that's really happening, the outsourcing of the American war effort. Is that in the ballpark?

Yeah, that's kind of right. Basically, it's set just a hair into the future when wars are 100 percent outsourced.

As opposed to 50 percent, right?

As opposed to half, which we have now. So we did it in the context of a samurai movie, where the mercenary is kind of wandering around this fallen world and the house that he left was corrupt, and he's looking to find someone to take his services. But there's corruption all around, and he's corrupt himself. We sort of did a little samurai myth in the middle of an absurd satire. It's hopefully an indictment of the neo-conservative ideology, but within the tradition of mocking the power elites and the corporate aristocracy. From state to church, you know. Political cartoons, George Grosz, Preston Sturges, the Marx brothers, "The Rules of the Game." Mark Leyner and Jeremy Pikser and I usually talk about those things. How do we do throw some genres into a blender, come up with something that's off-kilter, that will engage and entertain people.

Was this an attempt to make a film about what's going on Iraq that people wouldn't receive as preaching or lecturing?

Yeah, in a certain sense. But when we were writing it, the White House press secretary was saying, "These people better be careful what they say." There was straight-up McCarthyism and war fever, and George Bush was getting standing ovations in the Senate. Any dissent was seen as being disrespectful to the troops. So we were outraged. We thought the whole thing was so obscene.

You'd read about things like, OK, the Committee for the Liberation of Iraq, whatever that was. Basically a propaganda arm of the administration. They had, like, Bruce Jackson, who used to be V.P. of Lockheed Martin, and all these people like that to make a case for the war. They helped sell the war, and then the stock prices of their companies jumped 145, 150 percent. Statesman so-and-so would come forward, and then you find out that he's also on the board of Bechtel, and Bechtel has a $2.3 billion contract for Iraq. I wonder, did he have to sell his shares before he made his case? It's a privately owned company, so they don't have to tell you that. And the list goes on and on and on: Boeing, Lockheed Martin, Halpern, Bechtel, Parsons.

I think at a certain point you're like, look, the economy that these guys are a part of is outsourcing core functions of the government so that the war itself is the business. The medium is the message, man. They're just setting up inside the State Department as if it's an ATM. They're just taking money for it. They help create the company to go to war. They make the argument. And they get paid to go into war. And then they bar the competitors from the cleanup, the aftermath. Then they make money reconstructing it. And then they come back and speak evangelically about free markets. I guess they don't need to hire anybody. It's like a vast protection racket. And then we're supposed to say "Oh, yay! Oh, yeah! Free markets!"

My father said to me, "If you live right, you can look any man in the eye and tell him to go to hell." I can't say that to a lot of people, but war profiteers? Yeah. I got no problem saying it to them. And the other thing is, the film is anti-corporate. I own a Frigidaire. But I don't think Frigidaire is subsidized by our tax dollars, and that Frigidaire is getting people killed. To the best of my knowledge. You might look into Frigidaire and find out that I'm wrong. But I'm not anti-corporate. But Halliburton and all these other companies, it's the real deal. They're trying to privatize every aspect of what it means to be a state. You're going to have private surveillance at the borders, private interrogation, private jails. They're already outsourcing interrogation to private companies. That means that private companies are making a profit, on a cost-plus basis, to torture.

That's true, and it's also purely surreal. How do you even satirize something like that?

That's on our dime, right? Look, if these companies want to do whatever they want, fine. Secede from the union. Take your chances on the open market, right? Go take over a country. But don't do it on our dime. Move to Kuwait, raise a private army, and take over somewhere. But don't ask us to do it. Don't ask us to sit around and take it and not know what you're doing. These aren't particularly subtle facts. I'm not breaking any information you can't read somewhere. It's so beyond a doubt. The lie is so foul, and the stench of lies is so great. People just don't want to face that it's true. I haven't heard the Democrats talk about it.

Not really. It's kind of strange that this is such a big part of the political and economic climate and we have three presidential candidates pretending it's not happening.

Well, anybody who talks about this I'll vote for. Blackwater has had $600 million of contracting. What were they doing in New Orleans after Katrina? Whose interests were they protecting? Who gave them the right to roam the streets after a national disaster? Corporate ideologues on the right try to eviscerate anything to do with the government or the state. Then they say, "See, it doesn't work. Bring in private enterprise for profit." That's what they're doing. Who's giving immunity from federal and international law? What part of the constitutional checks and balances covers them? Who gave them a license to kill?

Do you think people are so inoculated with this idea that private enterprise is good that they just don't think about this stuff?

Yeah, I think Naomi Klein's book ["The Shock Doctrine"] is so groundbreaking that way, when she's taking on that mythology that the free market equals freedom, but we're not even free. She's one of many voices, but she's footnoted and sourced it. So I think there's a real movement. I think Jeremy Scahill's book on Blackwater is excellent. There's a whole tide of new books coming out.

Would you hope that your movie will provoke some people to learn more about the issue? Is that part of the motivation for you?

We as filmmakers, the directors and the writers and I, were also trying to be experimental with form and do something new. So we were exploring other things, like form and moviemaking and genres. But the core underneath it is satire and comedy and seriousness. Hopefully it will be part of a conversation that says, "What's happening here is radical. The government is more than just awarding contracts to private companies who can use our tax dollars as an ATM, some corporate feeding frenzy." So those are our big ideas. Our thing is maybe like Moli&eagrave;re or "Sesame Street." I mean that in a good way, but my writing partners might kill me for saying that. It's like an incendiary political cartoon about all those things.

Maybe satire is a way around the difficulty that serious dramatic films about Iraq have had in finding audiences.

Satire is a great way to cut through. I think sometimes truth is so disturbed that if you don't look at it through an absurdist lens, you'd never get out of bed. And I think also it's a way of getting at the idea that it's all inevitable. That murder is a legitimate economic policy, for example. We believe that's just the way it is and there's nothing that can be done about it. It's just like the weather. There's nothing we can do about it. We treat the war like the weather and the weather like the war. Like, when a big storm happens, everyone is like, "What can we do? We're so outraged. How did this happen? What are we going to do?" With the war, everyone goes, "These things happen. It's just what happens." And I go, "No, no, no, the war is the preventable one." So I think that satire is a good way to get the ideas out.

It's a strange little punk rock movie. But it was definitely meant to have that feeling of inevitability, to tell a different myth, a different story that questions the official narrative. That's what listening to a Clash song did for me.

"War, Inc." is now playing in New York, Los Angeles and other major cities, with wider release to follow.