At Cannes, a big win for old Europe 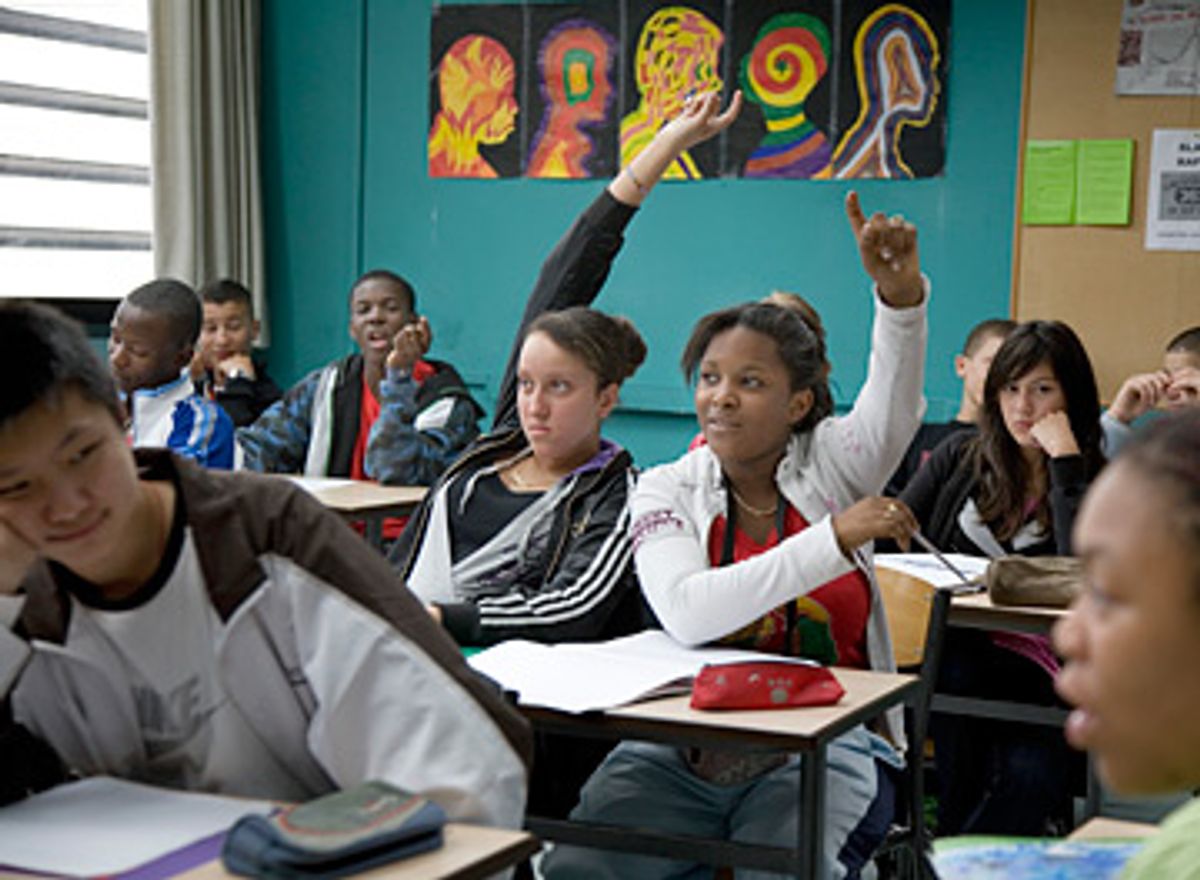 A scene from Laurent Cantet's "The Class" ("Entre les murs"), winner of the Palme d'Or at Festival de Cannes.

CANNES, France -- Europe's greatest old-school filmmaking nations can cancel the annual bitching and moaning. At the closing ceremony of the 61st Festival de Cannes on Sunday night, the Palme d'Or went to a French film for the first time in 21 years. Laurent Cantet's "The Class" (the French title is "Entre les murs," or "Between the Walls"), a collectively improvised high-school drama, premiered here on Saturday, the last day of competition. Everyone who saw it immediately grasped it was something special. Its screenwriter, former teacher turned bestselling author François Bégaudeau, plays the witty, erudite and short-tempered Monsieur Marin, whose multiracial French class at an inner-city Paris high school navigates a year of conflict, triumph and tragedy.

Many journalists (myself included) had expected Sean Penn's jury to reward Steven Soderbergh's hydra-headed "Che" with the big prize, but "The Class" was the most technically flawless, funniest and most rewarding film in this competition, and it ought to be headed for worldwide success. Its themes of ethnic and cultural strife, and its creators' desire to create a complex portrait of contemporary education that transcends both liberal and conservative stereotype, should reach a broad audience throughout mainland Europe, Britain, the United States, Canada and other immigrant-rich societies. (No U.S. deal has been announced, but that should happen quickly now.)

If the Palme d'Or can't be considered an upset, the second- and third-place prizes can. Both went to Italian films, the runner-up Grand Prix to Matteo Garrone's riveting, chaotic Neapolitan crime drama "Gomorra" and the Jury Prize to Paolo Sorrentino's "Il Divo," a pop-inflected biopic of legendary Italian politician Giulio Andreotti. Actor-director Sergio Castellitto -- the only Italian on Penn's jury -- observed that last year there was talk in Cannes about a "crisis in Italian film," because there were no pictures from that nation in competition. "Nobody's talking about a crisis now," he said. Neither "Gomorra" nor "Il Divo" is a natural for U.S. release, although the former (which I admired tremendously) is somewhat likelier. Perhaps they'll help break the virtual embargo, and audience apathy, that has frozen Italian pictures off American art-house screens.

Soderbergh's "Che" got its prize when the festival's best-actor award went to Benicio del Toro for his extraordinary performance as the Argentine born doctor and revolutionary whose rise and fall the two-part film chronicles. Del Toro got an extended ovation from the tuxedo-clad throngs inside the Grand Théâtre Lumière when he dedicated the prize to Che Guevara himself, but in briefly taking questions from the press he avoided expressing any political sentiment. "I wouldn't be here without Che," he said. "It's his story, so anytime the film wins anything I have to honor the man."

Continuing a long Cannes tradition, the best-actress prize went to a little-known first-timer, Sandra Corveloni, who makes her acting debut at age 45 in Walter Salles and Daniela Thomas' "Linha de Passe," an ensemble drama set in the slums of Sao Paulo. This one was a total surprise, since most journalists had focused on the showier star performances by Arta Dobroshi in the Dardenne brothers' "Lorna's Silence" and Martina Gusman in Pablo Trapero's "Lion's Den." (I haven't seen "Linha de Passe," which got mixed reviews here.) Corveloni was not on hand to accept the award for tragic personal reasons; she recently suffered a miscarriage and did not travel to France with the film.

Turkish filmmaker Nuri Bilge Ceylan won the festival's directing prize for "Three Monkeys," a moody, almost plotless drama about a working-class family torn apart by various levels of lies and miscommunication, and haunted by a very spooky dead child. I admired the film more than I enjoyed it; Ceylan creates some of the most memorable images in international cinema, but I don't think "Three Monkeys" has the coherence and clarity of "Climates," the Bergmanesque relationship drama that premiered here last year). Still, it's a movie that may well improve with repeat viewings away from the ludicrous atmosphere of Cannes. Ceylan movingly dedicated his prize to "my lonely and beautiful country, Turkey, which I love passionately."

Best screenplay went to the Belgian filmmaking brothers Jean-Pierre and Luc Dardenne, who were going for a Palme d'Or threepeat this year with their crime drama "Lorna's Silence." (Their Palmes came in 1999 for "Rosetta" and 2005 for "L'Enfant.") Like Ceylan's film, "Lorna's Silence" was perceived as a slight disappointment by many critics, at least outside the Francophone sphere, where the Dardennes are regarded as cinematic demigods. Their lead actress, the Kosovo-born Dobroshi, is wonderful as a recent immigrant to Belgium caught up in a grotesque murder plot, but the film's plot, while undeniably gripping, struck me as more cruel and mechanical than their previous work.

Penn's jury handed out special prizes to Catherine Deneuve and Clint Eastwood, which amounted to a de facto apology for the fact that neither Arnaud Desplechin's dense family drama "A Christmas Tale" (in which Deneuve stars) nor Eastwood's moody period piece "Changeling" (aka "The Exchange") won any significant awards. Both pictures were highly regarded here, and French critics would no doubt be up in arms about the dis to Desplechin if they didn't have other things to celebrate. Trapero's moms-in-prison drama "Lion's Den" and Israeli director Ari Folman's animated "Waltz With Bashir" were even more conclusively shut out, and the latter omission qualifies as a major surprise. Plenty of people here had speculated that Folman's dreamlike exploration of Israel's early-1980s war in Lebanon might bring home the Palme d'Or.

When an Israeli journalist asked Penn why the jury had neglected "this great Israeli film which everyone was buzzing about," the jury president handled the question tactfully. "One thing you learn on the jury is that buzz means nothing," he said. "First of all, I would agree with you that it's a great film, but we only had so many prizes to give, and there were films that called out to us. We thought we had certain categories filled, and then other things came along and seized our attention. I would add that 'Waltz With Bashir' is a terrific film that will find its audience without our help."

Penn said the jury had unanimously agreed on "The Class," and insisted that their first concern was not thematic or political. "We started with the art of film," he said, "and this was a virtually seamless film. All the performances were magic, all the writing was magic. All the provocation and generosity in the film was magic. On top of that, the issues it addressed touched us deeply."

Mexican director Alfonso Cuarón, another juror, described "The Class" as "high cinema that you can share with a very young audience," but it was Marjane Satrapi, the Iranian-born writer and co-director of "Persepolis," who had the best line of the jury's press conference. "There's almost nothing I believe in anymore, but I believe that culture and education give us the opportunity to be less stupid," she said. "It's always better to be less stupid than more stupid."

Asked about her reaction as a French citizen to "The Class," which arrives at a moment when this country is consumed with anxiety about its future, actress Jeanne Balibar said, "I was very grateful to the film. It dealt with every contradiction, and it never claims to solve those contradictions, either for the people on screen or for French society. We have a lot of work to do in France. It shows us those contradictions and it offers us hope, but it never says, 'Things have to be like this,' or 'Here's the solution.'"

When Cantet and Bégaudeau arrived in the festival's press-conference room clutching their Palme d'Or, they brought 23 teenagers with them, virtually the film's entire cast. I would venture to guess that never in Cannes history has quite such a boisterous group been crammed onto that podium. After trying to answer a couple of questions through the joyful pandemonium, Cantet pretended to turn serious, claiming they were all going back to Paris on the 11 p.m. train. The students erupted in a choral howl: "Mais non!" They were staying on the Côte d'Azur a bit longer.

In that case, suggested Bégaudeau, their on-screen "prof," they'd have a drama class at 11 and then read some Flaubert. This was a serious film about education, after all. When press conference host Henri Béhar asked whether the kids would travel with the film to the places it's likely to go -- to Brussels, London and New York, for example -- Cantet held his head in his hands in despair. "Brilliant idea," he said. "Thank you so much." His 23 cast members roared their approval. Wherever that group is as I write this, two hours later on a warm and windy Cannes night (thanks, McDonald's, for your "Wi-Fi gratuit et illimité"!), I imagine they've only gotten noisier.

Before we got to that joyous sendoff, we also learned that the Certain Regard competition, for lesser-known films and directors, was won by the Russian-Kazakh co-production "Tulpan," directed by Sergei Dvortsevoi. (Unlike Borat, Dvortsevoi really is from Kazakhstan. I didn't see his film, but I've heard it's terrific.) As most of us expected, English artist and filmmaker Steve McQueen won the Caméra d'Or -- for best first feature in all sections of Cannes competition -- for "Hunger," his immersive, almost experimental film set during the Northern Ireland prison hunger strike of 1981. When asked who he'd phoned first after winning the award, the born-and-bred Londoner replied simply: "Me mum." I'm sure she was delighted.