Two Democratic dynasties near the exit

The end of both Clintonism and its opposite -- Kennedy-style liberalism -- draws closer. 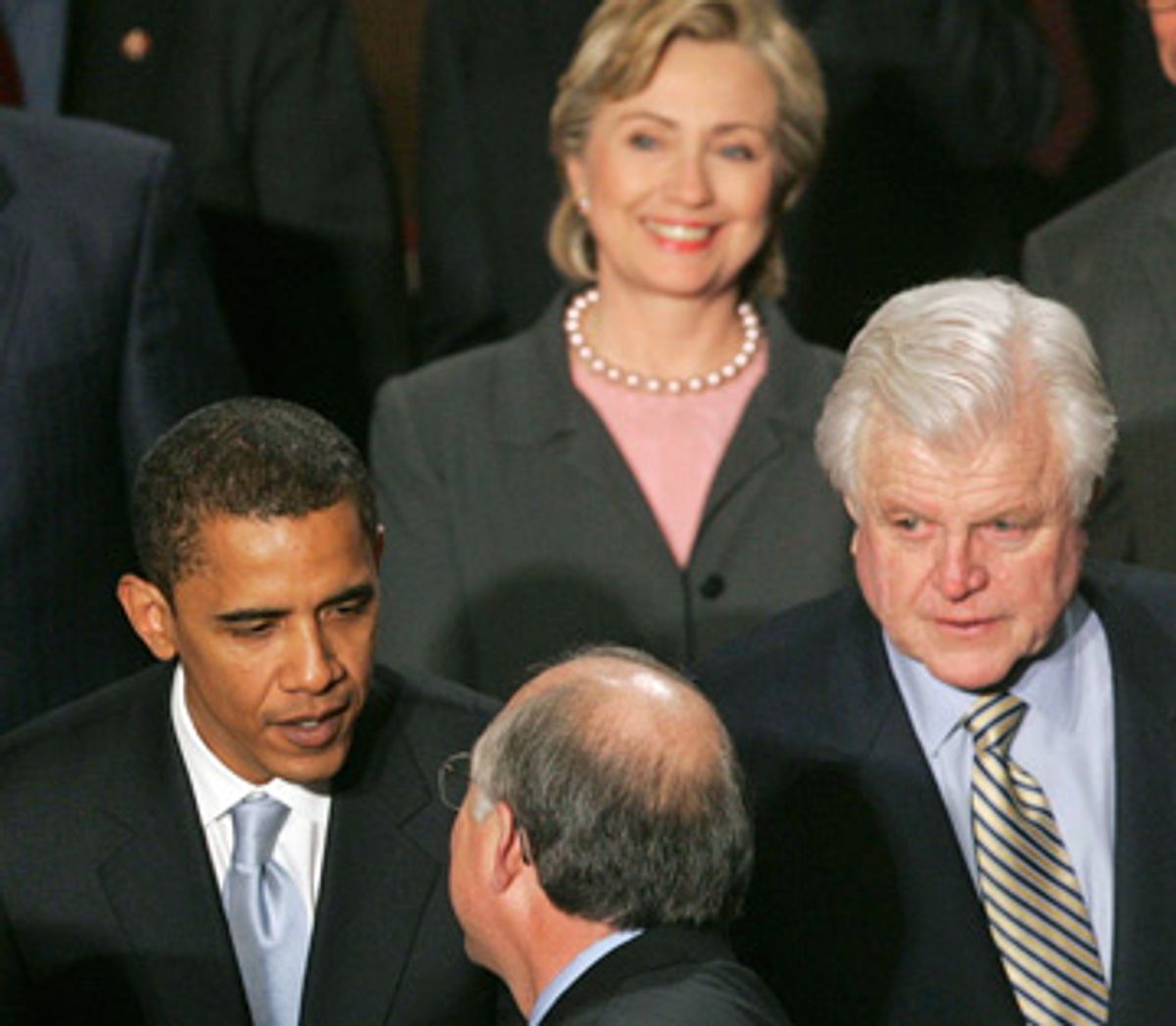 The sun-dappled image from August 1997 shimmers in memory. The two great Democratic political dynasties had set sail on carefree waters. Aboard the Mya as the schooner maneuvered its way out of Menemsha Harbor on Martha's Vineyard were the reigning Clintons and the radiant Kennedys. The news photographs, which mesh with my memory, show the president and the ruddy white-haired Massachusetts senator, along with a waving Hillary Clinton and the extended Kennedy clan, including Rep. Patrick Kennedy and daughter-of-Camelot Caroline Kennedy Schlossberg.

Last week, 11 years after that in-happier-times snapshot, the curtain began to descend on the Kennedys and Clintons alike. Before the wrenching news of a brain tumor, there had always seemed something eternal about Ted Kennedy: the survivor, the eternal-flame keeper of the dream that never died, the last active link to the heady days of can-do 1960s liberalism.

Each day brings Hillary Clinton closer to publicly acknowledging that her own presidential ambitions are over or, at least, redeposited in a safe-deposit box with a long lease. Certainly, her maladroit comment last week about Bobby Kennedy's assassination -- even if it was wrenched out of context in a take-no-prisoners media environment -- may well have been her presidential swan song. At the same time, her husband, the baffled 42nd president, is struggling with his new role as "Over-the-Hill Bill." In an interview with People magazine, Bill Clinton admitted that he can no longer be trusted to speak "late at night" when he is "tired or angry" without issuing himself "Miranda warnings."

The Clintons and the Kennedys were on separate trajectories long before Teddy and most of his family blessed the presidential ambitions of Barack Obama. Like comets with elongated orbits, the two families would periodically intersect (a teenage Boys State president from Arkansas shaking JFK's hand at the White House) and forge fruitful political alliances as they did during the 1990s. But even though they could dominate rooms and domesticate political enemies, the 76-year-old patriarch of the Senate and the 61-year-old former president are, at their core, as different as Hyannisport, Mass., and Hope, Ark.

Ted Kennedy and Bill Clinton (more than Hillary) represent the two ends of the Democratic practical-politics spectrum. When Kennedy, unbowed in defeat, spoke to the 1980 Democratic Convention, he boldly declared, "I will continue to stand for a national health insurance ... Let us resolve that the state of a family's health shall never depend on the size of the nation's wealth." At the height of his greatest triumph, his smashing 1996 reelection victory over Bob Dole by 8 million votes, Bill Clinton devoted exactly two words to "health care" in his second inaugural address. With Newt Gingrich neutered and Monica Lewinsky still unknown, Clinton instead opted for poll-tested banalities like prattling about "personal responsibility" and proclaiming, "Government is not the problem and government is not the solution."

Actually, the leader most responsible for reshaping Democratic politics after Vietnam may well have been Ronald Reagan. Clinton's entire presidency can be seen as an effort to take off the table most of the issues that Reagan used as cudgels against the Democrats -- welfare, crime, permissiveness, budget deficits and big government. Once the healthcare reform debacle and the 1994 elections prompted Clinton to stop thinking about tomorrow and start brooding about yesterday, his cautious centrist approach to governing was mostly about building a bridge to the next election. Hillary Clinton (aside from her poll-propelled pander on the gasoline tax) has pointedly rejected triangulation on domestic issues during this campaign, more than matching Obama on any liberal policy grid.

During the Reagan years, Kennedy -- out of necessity -- mastered the art of bipartisan compromise. His olive-branch legislative style led to missteps like his credulous support for George W. Bush's all-the-funding-left-behind 2001 education bill. But Kennedy also deserves credit for his role in the 2004 passage of the prescription-drug bill -- the biggest (and, to be honest, as yet unfunded) expansion of the social safety net since Medicare.

It was in response to Reagan's mantra that "the Democrats are weak on national security" where Kennedy parted company with the Clintons (yes, here we are definitely including Hillary). Maybe having experienced the hair-trigger moments of his brother's nuclear confrontation with Nikita Khrushchev over missiles in Cuba gave Kennedy the self-confidence to challenge the Bush family's portrayal of Saddam Hussein as Adolf Hitler Redux. About the only argument that can be mustered in defense of Hillary Clinton's 2002 vote (presumably influenced by Bill's counsel) to permit the war in Iraq is that the entire feckless wing of the Democratic Party joined in this march of folly toward Baghdad.

For more than three decades, Ted Kennedy has been a living refutation of F. Scott Fitzgerald's maxim about "no second acts in American life." Ridiculed as the president's dim-bulb youngest brother when he was handed a gift-wrapped Senate seat for his 30th birthday in 1962, and then reviled for his conduct on a tragic night at Chappaquiddick, Kennedy took an idiosyncratic path to becoming a senator worthy of a Capitol Hill legislative office building someday being named in his honor.

Hillary Clinton will probably not take her defiance-of-reality fight all the way to the Democratic Convention, as Kennedy did in his scorched-earth struggle against Jimmy Carter in 1980. But she will soon face a similar second-act career dilemma. Will the next four or eight years merely be a holding action as she plots a final assault on the White House? Will she stalk a would-be President Obama much as Kennedy shadowed Carter? Or will she follow Kennedy's later and wiser example by deciding that her ambitions can be sated by waging the good fight in the Senate -- a body where the current majority leader, Harry Reid, is not exactly the stuff of Statuary Hall.

Last week, quickly denied rumors bubbled up from the underground springs of premature vice-presidential gossip claiming that the Obama and Clinton camps were in talks over the heartbeat-away job. In truth, since John Kennedy tapped Lyndon Johnson at the 1960 Democratic Convention, only two vice-presidential selections (George Bush in 1980 and John Edwards in 2004) have been the runners-up for the presidential nomination. An Obama-Clinton ticket certainly still could be engineered, but the loyalty oaths needed to ratify such an alliance would be more rigorous than those required by the House Un-American Activities Committee.

But beyond uneasy personal relationships, Obama may regard the Clintons as a historical artifact of the 1990s. True, Obama has managed to survive primaries and caucuses in 48 states without ever revealing how much of his political philosophy is Clintonian moderation and how much is Kennedy-esque liberalism. When it comes to middle-class tax cuts and a no-mandates healthcare plan, Obama cleaves to safe centrism. On Iraq and other foreign policy issues, Obama is bolder and more inspirational. But maybe the real Obama difference is that -- unlike Ted Kennedy and both the Clintons -- the 46-year-old all but certain nominee is the first true post-Reagan Democrat.