Charlie Gibson says that it's not the job of the media to "debate" with political leaders, merely to pose questions. 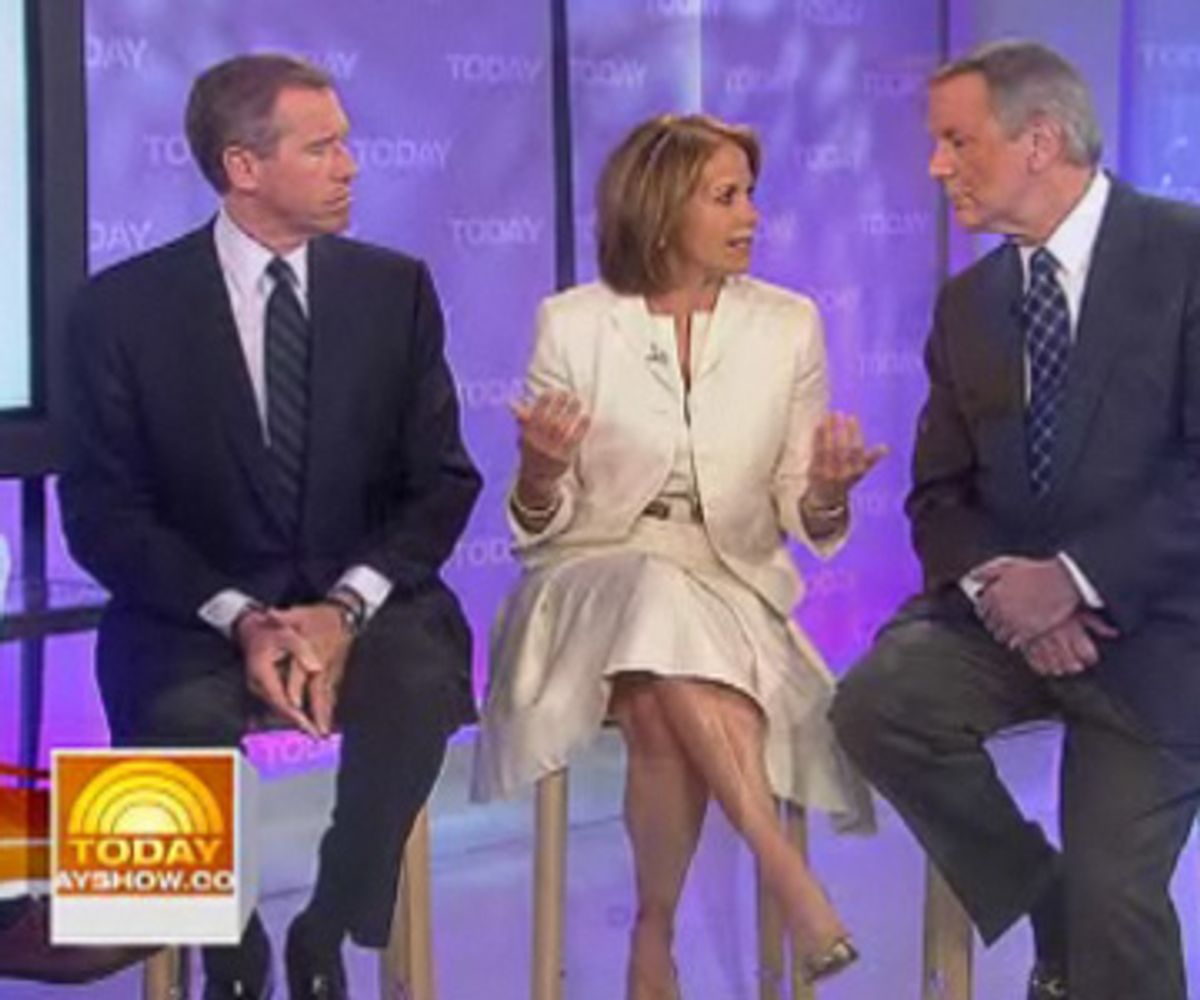 I was going to add this as an update to my prior post on Scott McClellan's extraordinary description of the media as "deferential, complicit enablers" of Bush administration "propaganda," but it should really stand on its own. Here is an absolutely amazing link to a video where the three network news anchors appeared jointly on The Today Show this morning and were forced by McClellan's book to address whether the media failed in its duties in the run-up to the war -- the first time, to my knowledge, that this topic has ever been broached by network news journalists (h/t Kitt). The fact that television news has blacked-out the whole issue until now is, by itself, rather amazing. While Katie Couric impressively argued that the media did fail to do its job -- pointing out that the White House threatened networks which were perceived to be too critical with cutting off access to the war and that anyone who questioned the war was deemed unpatriotic and all of that "affected the level of aggressiveness that was exercised by the media" -- the painfully empty-headed Charlie Gibson and the mindlessly establishment-defending Brian Williams both insisted that the media did a perfectly fine job and that they would do nothing different. "There was a lot of skepticism raised about" the Colin Powell speech, said Gibson, in one of the falsest statements ever uttered on TV. He continued:

It was just a drumbeat of support from the administration. And it is not our job to debate them; it's our job to ask the questions.

Indeed. Perish the thought that journalists should be adversarial to our political officials, challenge what they say or point out when they're lying. Instead, their job is merely to pose polite questions, let political officials say what they want in response, and then go home -- just as Charlie Gibson said. This is why most establishment journalists will never be convinced that they failed to do their job, no matter how much evidence is presented: because of the understanding they have of what "their job" actually is. If anything, by Gibson's understanding of what they're supposed to be doing, they did their job brilliantly, by letting Bush officials go on their shows and -- as Cheney aide Cathy Martin said about what happens when they went on Tim Russert -- "allow[ing Bush officials] to control the message."

As I often do, I'll use this 2005 speech by the great David Halberstam, delivered at the Columbia School of Journalism, to illustrate how rancid and worthless our establishment journalists of today are -- especially the TV stars like Gibson and Williams. Halberstam observed that "by and large, the more famous you are, the less of a journalist you are," and recounted that his proudest moment in his career was when, as a young reporter in Saigon, he stood down a General in Vietnam who was attempting to threaten and intimidate him from independently investigating claims that the Pentagon was making about the war. Halberstam apparently didn't share Gibson's aversion to "debating" government officials.

Back in 1999, Halberstam wrote: "Somewhere in there, gradually, but systematically, there has been an abdication of responsibility within the profession, most particularly in the networks." He continued:


Television's gatekeepers, at a time when a fragmenting audience threatens the singular profits of the past, stopped being gatekeepers and began to look the other way on moral and ethical and journalistic issues. Less and less did they accept the old-fashioned charge for what they owed the country.

The viewpoint seemed to be -- from their testing and polling -- that the American people did not want to know what was going on, so why bother them with unwanted facts too soon? So, if we look at the media today, we ought to be aware not just of what we are getting, but what we are not getting; the difference between what is authentic and what is inauthentic in contemporary American life and in the world, with a warning that in this celebrity culture, the forces of the inauthentic are becoming more powerful all the time.

The arc of our country and its media: from David Halberstam's confrontation with a U.S. General in Vietnam over his demands to investigate (rather than mindlessly accept) the Pentagon's war claims to Charlie Gibson and Brian Williams sitting around giggling on TV with Matt Lauer and muttering about what a great job they did in covering the administration's march to invade Iraq, when even Bush's own Press Secretary mocks them for being weak, complicit little mouthpieces for government propaganda. That damned Liberal Media.

UPDATE: Concerning this statement by Gibson -- "You go back to the Powell speech. There was a lot of skepticism raised about that" -- I just described it as "one of the falsest statements ever uttered on TV." But when I wrote that, I hadn't gone back and read what Gibson and his Good Morning America colleagues were saying at the time about the Powell speech. Now that I've done that, I realize that I was far too kind in describing Gibson's comment.

On February 6, 2003 -- the day of Powell's speech -- Gibson had on as guests former CIA Director James Woolsey and Terence Taylor of the International Institute For Strategic Studies to analyze Powell's claims. Here are some of the super-tough, skeptical questions Gibson asked:

* Question number two that was in my mind. James Woolsey, he showed intercepts, he showed photo intelligence. He talked about human resources that we had. How much intelligence was compromised?

* On a scale of one to 10, one being the most sanitized of intelligence information and 10 being laying out all our intelligence ammunition, where was he yesterday on the scale?

* Terence Taylor, as I look at some of the pictures that we were talking about just a moment ago with James Woolsey, the pictures dramatic in that they show Iraqi trucks pulling away from sites virtually as the, as the inspectors trucks are pulling up. How compromised are the inspectors there? Are they totally infiltrated by Iraqi intelligence?

Here's how the segment ended:

James Woolsey, the Iraqis immediately challenged a lot of what was shown, said it was altered, said it was doctored. The international community -- do they know that stuff was genuine?

Oh, anybody who is objective about this I think does. The people who now doubt whether or not Saddam really has WMD programs, chemical and bacteriological, in particular, are really of two types, either they work for Saddam or they're doing a human imitation of an ostrich. There really are, I think, no other possibilities.

Oh, the "skepticism" is just so bountiful. The administration must have been just furious with Gibson for his tough, skeptical questions. Later in the show, Diane Sawyer introduced Gibson at the top of the hour and he said: "I'm Charles Gibson in New York. We're gonna have more reaction to Colin Powell's presentation at the United Nations. It was very direct, it was detailed, it was comprehensive." That's just scathing commentary by Gibson.

On the same show, Diane Sawyer introduced Martha Raddatz to talk about the Powell speech, and Raddatz promptly said things like this: "Good morning, Diane. Secretary Powell laid out a strong case against Saddam Hussein," and like this: "Powell said Iraq moved weapons to avoid detection. Satellite imagery, he said, shows a storage area for chemical weapons," and like this: "Powell also said evidence indicates that Iraq may have 25,000 liters of anthrax, has two of three components needed to build a nuclear bomb, and has ties to and harbors al Qaeda."

They then cut to Condoleezza Rice saying: "The Iraqis know what they need to do. And a little bit here and a little there is not going to get it done." Raddatz concluded: "Powell's presentation walked a delicate line between revealing new information and protecting methods of intelligence gathering." There was not a single syllable uttered that questioned any of this and, needless to say, no dissenting voices were heard.

But this morning, Charlie Gibson specifically points to the tough, skeptical reporting he did with regard to Powell's U.N. speech to prove what a great job the media did. Worst of all, that they think they did a good job means they'll not do anything different in the future.