"My kids think I work in a trailer"

In this interview and podcast, Julianne Moore talks about being a normal mom and her distinctly abnormal role in the incest-murder drama "Savage Grace." 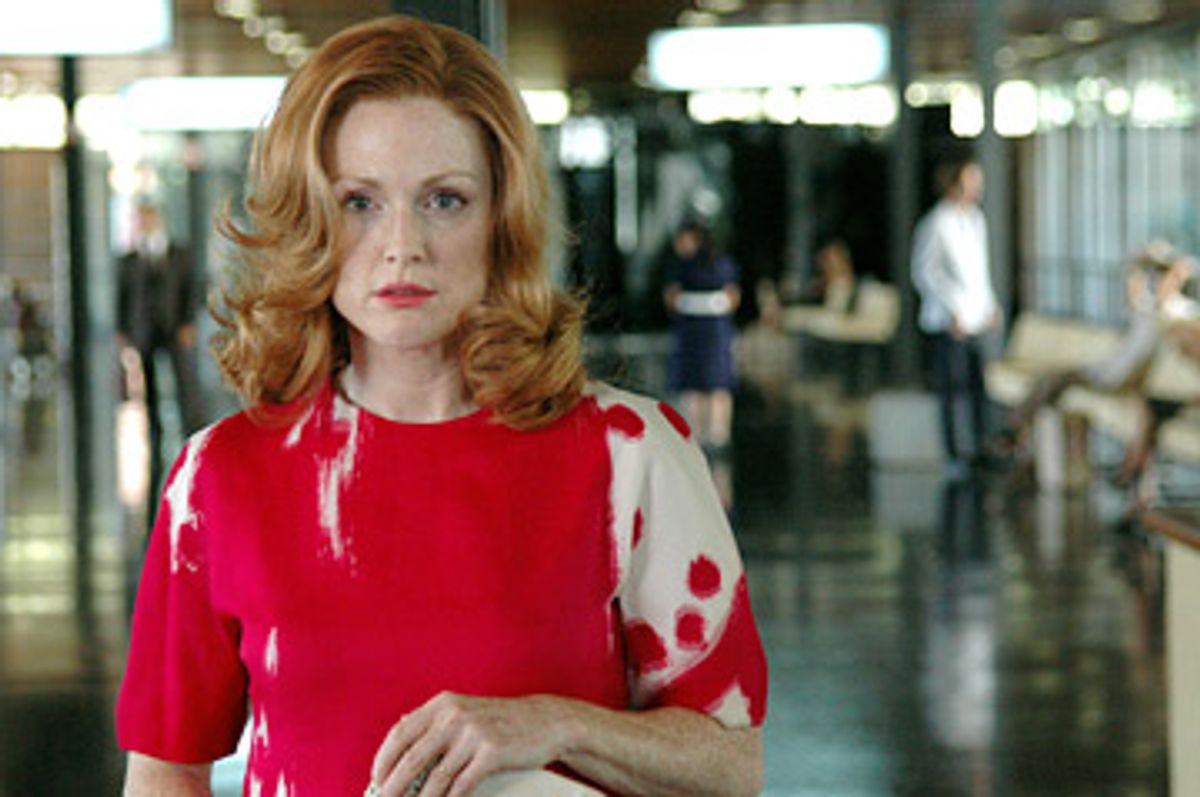 "Savage Grace" involves an exceedingly unlikely combination of ingredients. It's a sleazy, true-life story of decadence, incest and murder. It features a four-time Oscar-nominated movie star, but was directed by a man who's spent much of his career making gay-themed experimental films aimed at the art world, and who last made a feature film in 1992. It took many years for that director, Tom Kalin, and that star, Julianne Moore, to get the picture made, and since they premiered "Savage Grace" in the Directors' Fortnight at Cannes last year, it's been on a seemingly endless tour of global film festivals, visiting Karlovy Vary (Czech Republic), Melbourne, Toronto, Reykjavik, Vienna, London, Stockholm, Sundance, Glasgow, Dublin and Tribeca, among others.

Of course nobody should like a film simply because it has interesting and artistically complicated origins, but that background may help provide some important context for "Savage Grace." Saying that it's gotten a mixed reception around the world is probably being generous, but some people who hate "Savage Grace" may hate it for doing exactly what it sets out to do. Based on the once-notorious Baekeland murder case of 1972, Kalin's film is an off-kilter, deliberately arch portrait of a vanished world of ultra-rich overseas Americans as they descend into madness and debauchery. If Henry James had lived in the modern age and developed a taste for cocaine and anal sex, he might have written this story.

"Savage Grace" is a deliberately excessive picture that recalls the self-indulgent '70s cinema of Luchino Visconti, Bernardo Bertolucci and R.W. Fassbinder, and also the "queer cinema" of the '90s in which "Swoon," Kalin's first feature, played a crucial role. It offers the viewer no acceptable hero or heroine to identify with; social climber Barbara Daly Baekeland (Moore), her philandering husband Brooks (Stephen Dillane), heir to the Bakelite fortune, and their only son, Tony (played as an adult by the English actor Eddie Redmayne), are viewed as if from an analytical distance.

Two of the movie's sex scenes, both of them officially heterosexual, might be among the kinkiest and most disturbing such scenes in cinema history. If you've heard anything at all about this movie, you've heard this: When Barbara begins to fear that Tony is just a bit too interested in his male friends, she takes matters (as it were) in her own hands.

I'm fully prepared to defend "Savage Grace" as a purposefully unstable blend of social satire, female-centric family tragedy and trashy eroticism, but there's no point pretending that a wide audience is likely to enjoy it. Even critics who've attacked the film are proclaiming Moore's performance as one of her finest. Barbara Baekeland was a woman who had married dramatically upward in class and felt the danger of having that wealth and status taken away from her. As Moore plays her, Barbara isn't merely a basket-case divorcée betrayed by her husband and (at least in her mind) her son, but a beautiful, driven, wounded woman, appealing from certain angles and appalling from others, who is gradually poisoned by the environment of toxic depravity around her.

Last May in Cannes, Moore met a group of reporters at a beachfront pavilion just after the film's premiere. (At least the weather was better than at this year's festival, when the beach was largely out of the question.) She was a likable, commonsensical and forthright conversationalist, who dealt gracefully both with hopelessly broad questions and with intrusive ones about her private life. She told us she was about to start work on a new film with Brazilian director Fernando Meirelles -- a film that of course turned out to be "Blindness," which opened the 2008 Cannes lineup. As for "Savage Grace," Moore said she had first read Howard A. Rodman's script on board a boat when her daughter Liv was a few months old. Liv is now 6. (You can listen to this interview here.)

"It took us that long to get the financing," she said. "Every summer we'd think we'd have the money, we'd say, 'Oh, we almost have it, we almost have it.' And then it would fall apart. Until finally, when it happened with Barcelona last summer [in 2006], we were incredulous. It just didn't seem possible. And we did the film in, like, five weeks. I was very interested in this story. I think that had it been fiction, you would just think, 'Oh, this is just sensationalism. This is just salacious.' But because it's nonfiction, you're really struck by how epic this tragedy is. It's a classic tragedy of a family destroying itself."

As for the incestuous relationship between Barbara and Tony, which is a small part of the story but almost the sole subject of media interest in the film, Moore said, "I don't think you can talk about it out of context. I think that's what very important. You know, obviously you do have some trepidation about a story like this. It's really serious stuff. But it's not being celebrated. We're not telling this story to celebrate this transgressive family. This is presented as a tragedy. It's kind of the way you'd look at Oedipus or any of those stories. You're like, 'Wow, this exists. This is possible within the realm of human experience.'"

Someone asked about the purpose of a tragedy as baroque as the Baekeland disaster. "We tell these stories to ensure our own behavior, probably," Moore suggested. "I don't know if ultimately -- are they cautionary? That's what the Greeks thought. There are ways to live your life and there are ways that are going to cause certain disaster."

The Baekeland story, Moore suggested, offers a kind of counterbalance to our social obsession fascination with the lives of the rich. "In this day and age there's this ridiculous fascination about wealth," she said. "It's kind of upsetting and out of proportion. But this is sort of a cautionary tale. You see these rich people with no boundaries. They have no job, they have no purpose, they have nothing to do. They have no focus, and so their focus kind of shifts to one another. They seek this incredible stimulation because they get no stimulation from how they're interacting with the world. You see the sexual stimulation, the stimulation from drugs. All this kind of stuff that happens to these people that have too much."

When one reporter asked whether she felt empathy with Barbara, or could identify with her, Moore drew a distinction between the two. "I felt a tremendous amount of empathy for her," she said. "She was loving and charismatic and smart and compelling and kind of wanted to be part of the world desperately. She was also needy and difficult and boundaryless. So I felt a tremendous amount of empathy for her. Identification? No. But that's a different thing. I think people are always asking actors, 'How are you like this character?' But that's not what acting's about. It's not about identification. It's about empathy for people, for the human condition."

When asked if her own stable family life allowed her to play a damaged nutcase character like Barbara Baekeland, Moore laughed and quoted Flaubert's maxim: "Be orderly in your life so you can be violent and original in your work." She added: "For me, that's kind of how it is. I have a very, very normal life, with the exception of being very lucky and privileged. I have two children, a dog, a husband [writer and director Bart Freundlich]. We live in New York, the kids go to school."

One journalist wondered how Moore's kids might react, some years from now, if they pull "Savage Grace" off the shelf and see the memorable scene in which their mom, clad in a tweed suit, climbs aboard the lap of a bored-looking young actor who's playing her son. She smiled and shrugged it off. "Children have a very limited interest in what their parents do," she said. "Can you remember what your mom and dad did, exactly? I know that my mom is a psychiatric social worker, but if you asked me to name the hospital I'd go, 'Uh ...' It's the same with us. My kids for a long time thought I worked in a trailer, because that's where they went to visit me. They know I'm an actor, but I'm their mom. What I try to tell them about work is that Mommy and Daddy are very lucky and we like our work. When they grow up and see my movies, they'll know that I did what I cared about."

"Savage Grace" opens May 30 in New York, with more cities to follow. It will also be available via IFC In Theaters on many cable-TV systems.