The fight over Florida and Michigan

Here's what to expect when Democratic leaders meet to decide the fate of delegates from the two states' outlaw primaries. 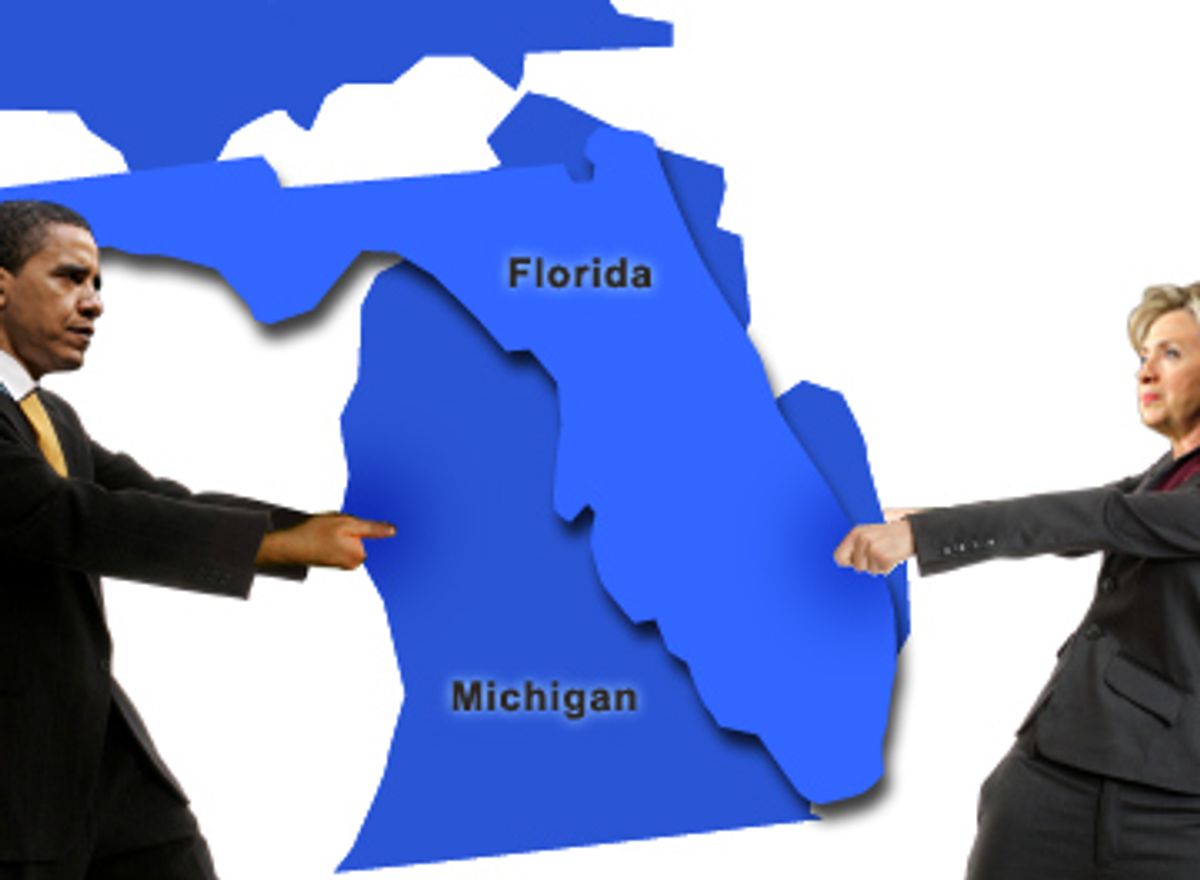 Nearly five months after the opening-gun Iowa caucuses, the last major clump of Democratic convention delegates will be awarded Saturday to two states that so badly wanted to be among the first. While there are technically still three primaries (Puerto Rico, South Dakota and Montana) on the Democratic docket, the remaining drama will be played out in a hotel ballroom, when the party's 30-member Rules and Bylaws Committee meets to modify its punishment of Michigan and Florida for holding January primaries in flagrant defiance of the officially sanctioned schedule.

Despite desperate cries from the Hillary Clinton camp to count every delegate from these two outlaw primaries, which she won, the contours of a half-a-loaf deal are already in place, according to Democratic insiders. Key figures on the Rules Committee informally agreed by telephone Wednesday night to seat the entire Florida delegation based on the Jan. 29 primary, but to give them each only half a vote. The same principle would be applied to Michigan, but there are still unresolved complications over how to handle the "Uncommitted" delegates chosen in the Jan. 15 primary in which Barack Obama's name was not even on the ballot.

Under this 50 percent compromise, the beleaguered Clinton would gain a 28-delegate edge (19 from Florida and nine from Michigan), not counting the half-votes from the 53 superdelegates from the two rogue states. With Obama nearly 200 delegates ahead and the clock nearing midnight for Clinton, the Rules Committee's verdict is likely only briefly to delay the anointment of a Democratic nominee. That margin explains why the Obama campaign is now willing to be partially accommodating. "The fairest resolution, since neither of us campaigned in these states, would be a 50-50 distribution," said David Plouffe, Obama's campaign manager, during a Wednesday conference call with reporters. "We're obviously now agreed to accept some outcome that gives her delegates."

Former Democratic national chairman Don Fowler, who is an expert on party rules, offered a puckish, but highly probable, forecast about Saturday's meeting: "We're going to settle it peacefully, I think. There'll be some strident remarks, maybe some by me, and we'll seat about half the delegates. Not as much as Hillary wants, but some. Then after six or eight hours, we'll kiss and make up and go home."

The Rules Committee has been a fierce protector of the principle that the presidential race should kick off in small states that place a premium on personal campaigning. By illegally queue-jumping into January, Michigan and Florida triggered a scheduling nightmare that almost sent the New Hampshire primary and Iowa caucuses hurtling into December 2007. While the initial punishment of stripping Michigan and Florida of all their delegates was draconian, the strong consensus on the Rules Committee remains in favor of meaningful and lasting sanctions. "Does the emperor have any clothes or not?" said a member of the committee. "The issue is simple: Can the Democratic Party enforce its rules?"

Even Tina Flournoy -- a top Clinton advisor and a longtime member of the Rules Committee who publicly advocates restoring all the delegates -- acknowledged the need to deter states in the future from elbowing their way to the front of the line. "I don't think any state in 2012 will want to go through what Michigan and Florida have gone through in the last year and a half," Flournoy told reporters during a Wednesday conference call by the Clinton campaign. In truth, the law of unintended consequences remains the most potent weapon against front-loading the primary calendar in the future. Clinton and Obama lavished attention on laggard states like Pennsylvania, Indiana and North Carolina, while all Democratic contenders abided by a pledge not to campaign in Michigan and Florida.

In prior presidential nomination fights, the candidates skirmished over procedural issues that were entirely specious, such as the unsuccessful effort in 1980 by Ted Kennedy to free legally bound delegates to vote their conscience. But for the Rules Committee (on which Clinton boasts 13 public supporters and Obama eight), the Michigan and Florida issue involves far more than scrapping over delegates. As Donna Brazile, Al Gore's 2000 campaign manager and a long-standing member of the RBC, says, "We're all rules geeks. People don't understand how seriously we take this committee. We all have the history of the party rules and we all know how the rules came about."

Democratic Party attorneys provided the Rules Committee with an advisory memo Wednesday arguing that party statutes required stripping Michigan and Florida of, at minimum, half their delegates. But despite news stories that portrayed this memo as suddenly limiting the authority of the RBC, the reality was that the DNC's lawyers tailored their recommendations to fit the consensus on the committee. Since the Clinton give-all-the-delegates-back position was going to lose on Saturday anyway, the memo merely provided a legal justification for the committee's preexisting position.

While Florida's Democratic leadership is quietly willing to accept the verdict of the Rules Committee, the Michigan situation remains troublesome. The seemingly arcane issue that may dominate discussion on Saturday is what to do with the 55 delegate slots that the "Uncommitted" line won in the Michigan primary. Because Obama and John Edwards had removed their names from the Jan. 15 primary ballot, Democrats opposed to Clinton had few options other than voting for "Uncommitted." The position of the Michigan Democratic Party is, as spokeswoman Liz Kerr put it, "that the 'Uncommitted' delegates are Obama delegates."

But Democratic Party rules -- as Clinton strategist and RBC member Harold Ickes stressed during a Wednesday conference call -- treat the entity called "Uncommitted" as if it were a flesh-and-blood candidate. So from the Clinton side of the equation, there is a major issue about whether the "Uncommitted" can be arbitrarily assigned to Obama. The Obama camp has its own concerns about the 55 real-life "Uncommitted" Michigan delegates who were chosen at party conventions, since they claim there are pro-Clinton Trojan horses among their ranks. But Fowler predicts that these differences will be papered over: "I'm sure that we'll find an innovative way around this."

Traditionally, the RBC gathers the night before their meetings for a private rules-geeks-only dinner. Odds are that the solution of the Michigan muddle will probably be worked out when committee members meet face-to-face. For all the pro-Clinton demonstrations that are planned for Saturday, for all the overheated parallels to the 2000 count-every-vote claims, the most protracted rules dispute of the 2008 season is likely to end with half-filled glasses raised to toast half-votes for Michigan and Florida.