Did humor save the left at its darkest hour?

How did Stephen Colbert become a progressive political force? Theodore Hamm discusses "The New Blue Media," the rise of netroots and their role in the next administration. 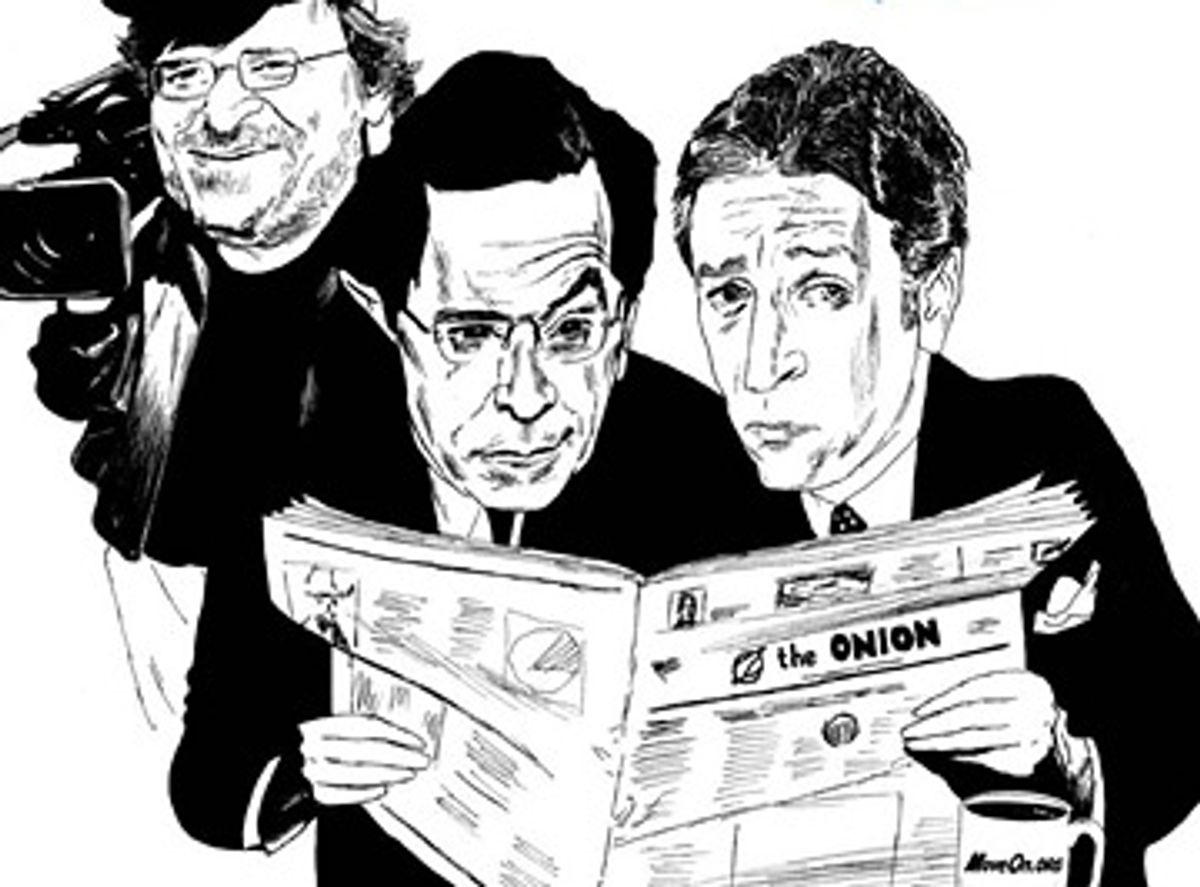 When future historians write of the long months between the terrorist attacks on the World Trade Center and the U.S.-led invasion of Iraq, there will most likely be a chapter about the overwhelming failure of the mainstream political media to properly question the Bush administration during the buildup to a failed war. Journalists who should have acted as government watchdogs instead acted largely as yes men, spuriously debating what should be done about Saddam Hussein's weapons of mass destruction.

In that recriminatory chapter, there will likely be a section about the exceptions: left-leaning, often satirical media outlets like "The Daily Show" and the Onion, whose headlines in the run-up to the invasion included "Bush Won't Stop Asking Cheney if We Can Invade Yet" and "Bush Seeks U.N. Support for 'U.S. Does Whatever It Wants Plan.'" These exceptions are the focus of

Salon spoke to Hamm about the emergence and growing influence of these media outlets and about the future of progressive political discourse.

In "The New Blue Media" you chart the emergence of media entities like the Onion, Air America, Michael Moore, liberal bloggers, "The Daily Show" and "The Colbert Report." Other than the fact that they are all left-leaning, what makes them a cohesive group or phenomenon?

The project actually originated in the campaign that most of us would like to forget, 2004. The netroots -- MoveOn and the blogosphere, which was still kind of young at that time -- had essentially backed Howard Dean, but then when Dean imploded and John Kerry became the electable nominee, pretty much everyone on the liberal-leaning left rallied to support him. MoveOn, Michael Moore, Air America, when it was launched in 2004 -- they were all kind of joining together, sometimes directly at particular events, or by appearing on each other's shows and by doing other kinds of cross-promotions, and so there was a constellation of different new media outlets that were pushing Kerry in 2004.

In the section on Air America, you mention that certain corporations like McDonald's and Hewlett Packard refused to advertise with the network, and you suggest that corporate pressure could be a possible danger for progressive media outlets aspiring to reach the levels of commercial success attained by right-wing media figures, such as Rush Limbaugh and Bill O'Reilly. I wonder if you think the failure of Air America has more to do with the fact it was on the left or with the way it delivered those leftist views?

I think the reason it failed was because of its business model, trying to start as a national network, rather than starting with syndicated programming. And had it retained some of the attempts at comedy, that might have made it more appealing as well. They were also delivering the same kind of mush that was being put forth by Kerry and the Democrats in 2004. Air America didn't really create anything that new or independent, and then it wasn't entertaining, at the same time.

I was interested to read just how entrenched the Clinton camp was in the early development of Air America and in Al Franken's other projects.

Sure, and that put the network so clearly in tandem with the Democratic Party that they weren't really offering anything independent. And you know, you see that on the right. Limbaugh and company obviously are in alignment with the Republican Party, but they also depart on issues that they hold dear -- immigration and so on. There was a spirit of independence lacking in Air America.

And you see that spirit of independence more in the netroots movement. Can you explain what you mean by netroots?

The netroots are the grass roots of the Democratic Party that are organized online, the Internet-based activism that started with MoveOn and mydd.org [now mydd.com] and some of the early blogs, like Daily Kos. The netroots have maintained a spirit of independence, but it fluctuates there as well.

In some ways, the netroots seem sort of like the progressive or left-wing answer to what the Republicans and the Christian Coalition did in the 1980s. That kind of grass-roots politics has been echoed on the Web.

Yeah, and it's starting to happen on the right, but up until this current campaign, it's still been liberal terrain or left-leaning terrain. There are definitely influential right-wing Web sites -- I wouldn't really define the Drudge Report as a blog -- but in terms of organizing and activism, the left still holds the advantage. The netroots are media watchdogs too. They counter the right-wing noise machine. They are challenging the mainstream political media, and when they are challenging the Democratic Party, which obviously needs to be challenged on Iraq and many other issues, that is when they are most effective.

It is ironic, then, that the outlet you find to be the most successful as a media watchdog is the one that has become the most mainstream: "The Daily Show." How is it that "The Daily Show" and "The Colbert Report" have become such huge phenomena but have still kept to what you see as the spirit of the "new blue media"?

Because they are asking the questions that the mainstream political media won't. They are best seen as ongoing works of media criticism. The very fact that Colbert playing a faux Bill O'Reilly now wields nearly as much influence throughout the political media as the actual Bill O'Reilly shows that there has begun to be a successful counter-attack against the right-wing noise machine.

In the book, you say that you see Colbert's infamous speech at the White House Correspondents Dinner as the moment that embodies the power of the new media to take down the old one.

It was a great moment. He shook up a roomful of the Beltway media elite, and in the wake of it, the old media led by the Washington Post tried to take him down, and they were overwhelmed by the response from the blogosphere.

You write a lot about the huge success that these nontraditional media outlets have had in capturing audiences, more particularly young, white, educated or at least semi-educated audiences. Though you are generally enthusiastic, you hint at the fact that by presenting themselves as comedians rather than political commentators or media critics, Stewart and Colbert are shirking an intellectual responsibility to deliver concrete ideas or fully explain their positions.

But if you look at some of the conversations that Colbert has with various authors and political figures ... I mean, Bernie Sanders was on there a couple of weeks ago making a case for socialism. Where else are you going to find that in the mainstream media? So, yeah, they are not presenting serious policy debate, but the issues that are discussed in the Nation and other progressive outlets turn up in "The Daily Show" and "Colbert" critique.

But in a much fluffier form!

I think there is obviously a need for both. People aren't going to be fully informed simply by watching these shows, even though for young people, ["The Daily Show" and "The Colbert Report"] are increasingly becoming the primary news sources. There is some danger in that, because people do need to be reading other, more serious analyses and different positions. But the success of these outlets also makes candidates recognize that they can't just give policy issues the typical treatment. They have to actually be accountable and explain why it is they are doing what they're doing.

But media is not a substitute for politics. I think that the netroots and other organizing that gets people involved are actually more important in some respects than media superstars making the rounds.

In the last chapter, you suggest that the influence of the netroots and the more activist wing of the new blue media would be marginalized in the (increasingly unlikely) case of another Clinton administration, which you characterize as inevitably pro-war and pro-corporate.

Clinton has attacked MoveOn for its organizing capacity, for its ability to turn out volunteers and voters to caucuses. As I show in the book, she's never been on friendly terms with the blogosphere and generally with the antiwar base of the party, who still won't forgive her for her vote or trust her. But the interesting thing is that she actually has adopted one of the main styles of the new blue media. To me, in the last few months in particular, she sounds a lot like Howard Dean in 2004, when he was the initial figurehead of the netroots. She's the combative fighter who, just the other day in North Carolina, was standing up on a pickup truck making her populist appeal. Obama is not coming across as a fighter in that same way, but he is in sync with the interactive nature of the netroots.

What do you mean by "interactive"?

So much of his campaign has been driven by use of the Internet and bringing out volunteers via text messaging and other new technologies. He's got the whole MySpace/Facebook campaigning thing down, and he's really succeeded in appealing to youth voters through those means. So two of these styles have emerged in recent years … the fighting Democrat style embodied by Dean and the more interactive, netroots-oriented campaigner.

But in the book it seemed pretty clear that you feel Obama is a better representative of the potential of this new media.

Well sure, because the style is only one component. The substance is important too. I'm showing all along that all of these outlets (except when Al Franken was the figurehead of Air America) have been steadfastly opposed to the Iraq war. So I think that Obama, because of that particular stance, is much more of a fit.

In an Obama presidency, what kind of role do you think the new blue media would play?

Obama is repeatedly stressing that politics flow from the bottom up, not from the top down. And that is the netroots perspective. It's basically an invitation to maintain pressure from below and keep advancing policy positions.

Why were you personally compelled to write this book right now?

Personally, just having come through the Bush era, I can't imagine what it would have been like without Jon Stewart, Michael Moore, the Onion, Stephen Colbert and company. It would have been pretty joyless, to say the least, and we probably would have felt powerless without the ability to try to influence the party through the netroots.