Not only is former Texas Sen. Phil Gramm a shill for special interests, his deregulation policies helped spur the mortgage crisis, among other financial disasters. 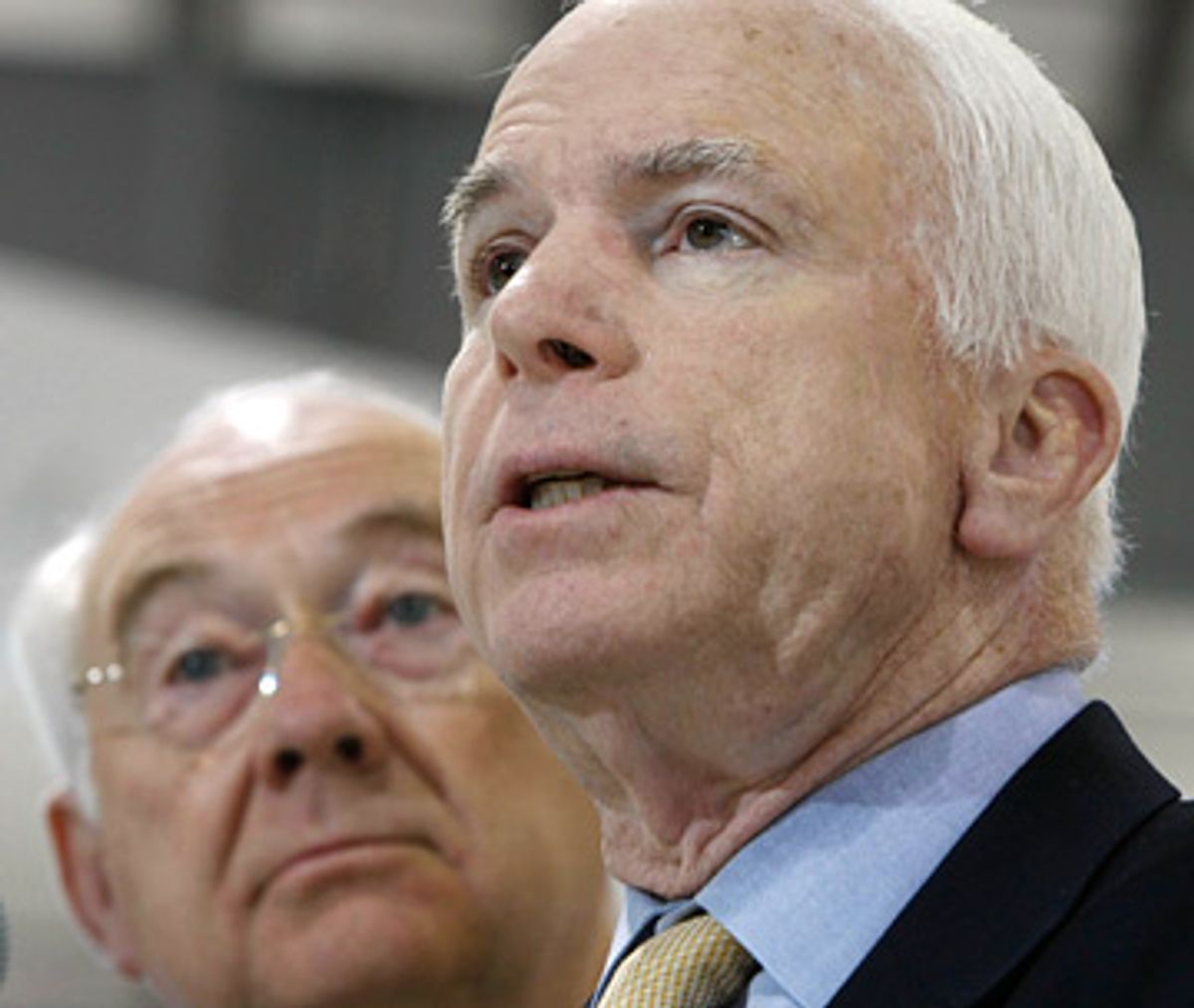 Even as John McCain struggles to preserve his image as a reformer by dismissing a few of the Washington lobbyists who dominated his presidential campaign, the futility of that effort suddenly became painfully obvious. Dire bulletins in the financial media warned of many billions in rotting mortgage paper held by UBS, the financial conglomerate that just happens to employ former Texas Sen. Phil Gramm, McCain's campaign chairman and chief economic advisor. Until two months ago UBS listed Gramm as a federal lobbyist on housing and mortgage issues.

So there at the shoulder of the Arizona maverick is perched yet another special-interest shill, in this instance not merely an errand boy for various dictators but the vice chairman of a Swiss bank whispering advice on how to cope with our economic woes. Or how not to cope, as in McCain's do-nothing approach to the foreclosure crisis, which displayed the strong influence of the financial lobby on his campaign.

Undoubtedly Gramm is promoting the agenda of those who subsidize him, as he has done ever since he entered politics as a servant of oil interests in his home state. He took hundreds of thousands of dollars from energy and financial interests as a congressman and then as a senator, rising to the chairmanship of the Senate Banking Committee, where he could really perform major favors. He is famed for slipping in an amendment desired by Enron Corp. back when his wife was on that doomed company's board. His employment by UBS, a company that recently warned some of its executives to avoid entering the United States for fear of criminal prosecution, demands fresh scrutiny of him as well as McCain.

But if Gramm's role as a banker and lobbyist is embarrassing to McCain, the greater harm is likely to be done by his economic advice. He and McCain have been friends since they were young congressional "foot soldiers in the Reagan revolution," as both like to say, and he is often touted (or was until lately) as a likely candidate for Treasury secretary should McCain win the White House.

Now that Gramm has resurfaced in national politics, he surely deserves to be arraigned for his long history of service to powerful interests, dating from the Enron scandal and beyond. But for most Americans, the dubious connections of McCain's lobbying pals, including Gramm, should be less worrisome than the likely results of yet another four years of Republican economic nostrums. Gramm's career stands for the false promises of right-wing ideology and the troubles that such schemes, embodied in legislation, have repeatedly inflicted on us.

The former Texas senator is less voluble these days than he used to be, perhaps unsurprisingly, but in years past he has boasted of his central role in key conservative legislation, especially in liberating major sectors of the economy and finance from public oversight and skewing taxation in favor of the wealthy.

So how has that worked out over the past few decades?

Back in the '80s, Gramm smiled upon the abrupt deregulation of the savings-and-loan industry, described by his idol Ronald Reagan as America's opportunity to "hit the jackpot" of growth. He used his political clout to protect the Texas operators whose crooked machinations eventually helped to bankrupt the S&L industry. In fact, the S&L debacle cost taxpayers hundreds of billions of dollars.

Meanwhile, Gramm had lent his name and energy to passage of the first Reagan budget in 1981, whose sweeping tax cuts failed to prevent recession -- and eventually required a long series of tax increases, beginning in 1982, to stanch the enormous deficits they created. At the same time he coauthored the Gramm-Rudman Act, which supposedly placed sharp constraints on federal spending but in reality had little impact.

When Bill Clinton came into office and found that the Reagan and Bush administrations had left the nation in deep deficit, he got no help from Gramm in cleaning up their mess. When Clinton bravely demanded a tax increase on the wealthiest Americans, who had profited hugely from Reagan policies skewed to their benefit, Gramm and his fellow Republicans bawled piteously about the nation's impending doom.

"I want to predict here tonight," he said on the evening that Clinton's budget passed in the spring of 1993, "that if we adopt this bill the American economy is going to get weaker and not stronger, the deficit four years from today will be higher than it is today and not lower ... When all is said and done, people will pay more taxes, the economy will create fewer jobs, the government will spend more money, and the American people will be worse off."

Is it necessary to point out how utterly wrong that prediction turned out to be? Most Americans did not pay more taxes, the economy created millions more jobs, the deficit was sharply reduced, and people were better off by every measure of economic progress, from productivity and profits to homeownership and reduced poverty.

But Gramm was not the kind of economist whose convictions are shaken by evidence, no matter how compelling. So obsessed with protecting bankers from government oversight was he that when Clinton tried to place stronger controls on terrorist money laundering, Gramm opposed even that measure as a "totalitarian" incursion.

Before he retired from the Senate in 2002, he wrote the Gramm-Bliley bill, an act broadly deregulating the financial industry -- and now blamed by many economists for the epidemic of speculation and fraud that has shaken the global economy.

Touting those changes as a way to "modernize" American finance for a global future, Gramm said they would bring wonderful new efficiencies and savings to consumers. As with the energy deregulation that he sponsored -- which was supposed to bring lower prices and better service, but led to blackouts and price gouging -- those economic wonders never quite appeared. The damaging effects of banking deregulation took nearly a decade to be felt, but whether we have experienced the worst still remains to be seen.

Over and over again, from the savings-and-loan fiasco to the Enron shock to the global banking meltdown, the golden promises of deregulation have turned to leaden ruin. Perhaps nobody cares about the lobbyists surrounding McCain, but someone should ask him why he would cherish the advice of a man whose devotion to ideology has already done us so much damage.