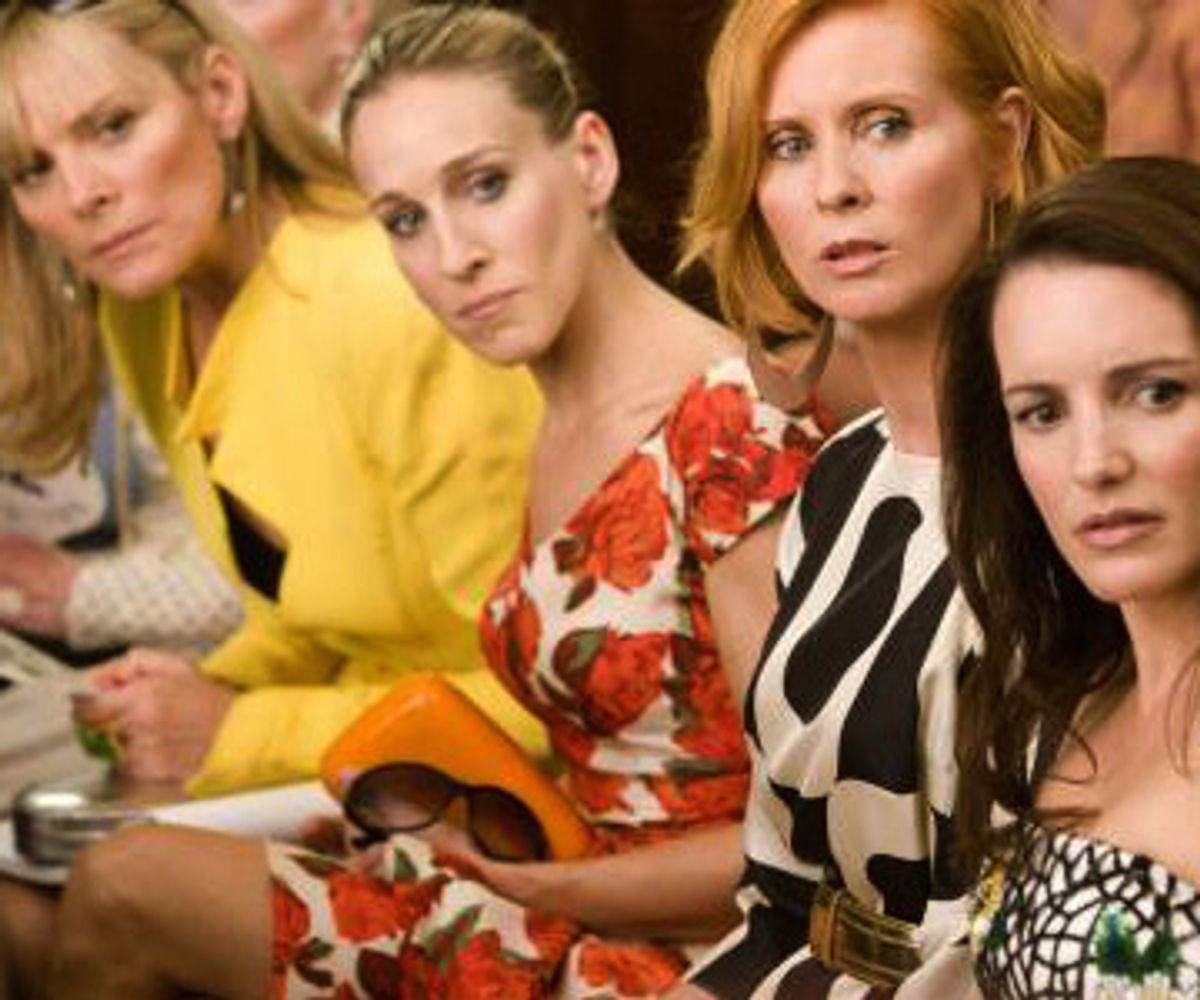 These days, you can't swing a vibrator without hitting a college sex columnist -- that's one way you can see the influence of Carrie Bradshaw, "SATC's" kicky heroine (based on New York Observer writer Candace Bushnell). Perhaps the most prominent is Sex and the Ivy's Lena Chen, a 20-year-old Harvard junior and sociology major who has blogged about her sex life with an explicitness that would make prim Charlotte York projectile-vomit onto her Prada pumps. Recently, the New York Times declared Star magazine editor at large, fame-seeker and general goody-two-shoes Julia Allison the new Carrie Bradshaw. But it's women like Chen, with their hardcore approach to covering sex without self-censoring, who aren't just the New Carries -- they're going where Carrie feared to tread.

When "Sex and the City" originally aired, Chen was 10. Suffice to say, she didn't watch it. What was once revolutionary for women to witness on TV-- women speaking graphically about their sex lives in (gasp!) public -- elicits shoulder shrugs from Chen and her peers. For these young women, "Sex and the City's" take on sex is, like, so passé. The episode where Samantha takes a female lover? Yawn. "A lot of my girlfriends would have already done [that] in college," Chen says, sounding horrified at the prospect, "not in their 30s." On another blog that she created, The Ch!cktionary, Chen posted a photo of herself with an unidentified male's money shot smeared all over her face. Carrie wouldn't take that lying down -- or, for that matter, standing up.

Female sex writers in a post-"SATC" world have found their perfect mates in the Internet, which enables them to publish whatever they want, whenever they want. These women are unabashed, unashamed, unrepentant and winning over male and female readers by talking about real sex -- not the prettified fantasy of it as seen on "Sex and the City." One such writer is Tracie Egan, a 29-year-old who goes by the unsubtle moniker "Slut Machine" on Gawker Media's popular site for women, Jezebel. Egan says that, once upon a time, "Sex and the City" "seemed like the personification of the things that I was thinking about." Today, what strikes Egan about the show is that it has "some really old-fashioned views about sex." She references a recent article that compared the foursome's husband hunting with that of Jane Austen heroines and says, "Carrie's columns were about relationships and head games. It wasn't about straight-up sex." Watching a recent episode of "Oprah" with an audience of screaming "Sex and the City" fans, Egan wondered just how sexually emancipated these Middle American women were.

But in many ways, "Sex and the City" wasn't really about sex at all. It was about a lifestyle: the shoes, the clothes, the parties. It was about relationships: Will Samantha ever commit? Will Carrie marry Mr. Big? In Egan's opinion, the real message of "Sex and the City" was about money. "I feel like Carrie's spending habits are so much more dangerous than her sex habits. A bad credit history is more dangerous than herpes," she says.

At the same time, some erotic pioneers are unapologetic about their "Sex and the City" fandom. Take, for instance, Jamye Waxman, a sex educator whose professional credits include directing a line of educational adult videos. Not only did "Sex and the City" open up the public dialogue on the sex lives of women, she says, but its impact on the real sex lives of women was also a very real phenomenon -- not a marketing ploy. "Sex and the City," Waxman says, "gave women permission to talk about subjects that they might not know how to bring up to each other, to their partners, or even to themselves. The topics are universal for a lot of women, whether you live in New York or Ohio. It gave all of us a platform to dissect ourselves and to say, 'I don't agree with this, let's talk about this, this is what I agree with.'"

One thing most writers -- perhaps especially those in New York -- didn't always find true was the show's glossy depiction of big-city existence. "I don't think [Carrie's] life as a writer was anything like my life a writer," says Rachel Kramer Bussel, a former Village Voice sex columnist who is currently editing "Best Sex Writing 2008." But, she points out, "SATC" tapped into something significant going on in the culture. It's a trend that continues today, a pursuit among women for a kind of sexual autonomy that hadn't existed in history, a new sexual revolution that's clearly a work still in progress. For the first time, Carrie et al. "could have sex just like men," says Bussel, who is quick to add, "which I think is a stupid phrase." Carrie may have been looking for love all along, but the most revolutionary depictions of sex in the series were the moments in which the women had sex like the other half does -- with impunity. Sometimes, they were looking for one-night stands, and they weren't about to apologize for it, an attitude that one can't help seeing in the sexually voracious writings of all the women interviewed.

Of course, not everybody's happy about the success and the return of "Sex and the City." Susie Bright was the original sexpert. The author of countless books on human sexuality, erotica and her own sexplorations, Bright was writing about sex before Carrie Bradshaw was in diapers. These days, she lives in Santa Cruz, Calif., with her partner and writes about her life, motherhood and sex at SusieBright.com. What does she think of "Sex and the City"?

"My ideas were clearly ripped off," she says. For her, it's like Iggy Pop spotting a CBGB T-shirt for sale at the mall. What "Sex and the City" did was co-opt a very real, very important movement at the time that was dedicated to female sexuality and was in no small part spearheaded by Bright. Unfortunately, "in some cases, like with 'Sex and the City,' the fantasy became bigger than the reality of women speaking about their sexuality." As "Sex and the City" returns, "everyone knows who Sarah Jessica Parker is, but Sarah Jessica Parker is not a pioneer in sex-positive feminism."

The women of "Sex and the City," asserts Bright, aren't political. "They're desperate to get married. They obsess about their marital status." And they turned the sexual revolution for women of the new millennium into a business. To make her point, Bright references a recent New Yorker essay, "The Fall of Conservatism" by George Packer, in which Pat Buchanan paraphrased social theorist Eric Hoffer: "Every great cause begins as a movement, becomes a business, and eventually degenerates into a racket." Comments Bright: "'Sex and the City' is the racket part of what once was recognizable as the sexual self-emancipation of the feminist movement." For her, the commodification of the 21st century female sexual revolution hits too close to home. "I can't watch these women, you know, make asses of themselves and be so petty and small-minded about sexual possibility. I take it too personally."

Says Bright, "I feel like someone drove over me with a truck. I feel invisible. I feel -- you know what I feel like? I feel like Trotsky when Stalin airbrushed him out of all the pictures of the Russian Revolution. I feel like the revisionist version of the sexual liberation movement is so stupid and shallow. If the original idea was about self-knowledge, and being orgasmically aware, and large and in charge, and independent, and not pathetically hung up on a man's approval, then the show is a failure." But, she adds, "I take it very seriously. I'm sure the people who make the show would say, 'Lighten up. Susie Bright -- what a pain.'"

While "Sex and the City" freed up the possibilities for a new generation of Susies, the downside is that, in pop culture, sex is now but one more commodity. Bright explains, "It does a disservice in the same way that you see an ad for a Lexus with your favorite Rolling Stone song or John Lennon song. This used to be something. I've always been sad when capitalism ruins my favorite passions."

Does she intend to see the film version of "Sex and the City"? "If someone asked me to go on a field trip, I would go to see what everyone's so excited about. Anything that gets women out of the house, hanging out with each other and confiding in each other and how they traverse their own sexual terrain, that's great. I don't care what gets you going. There will be no Susie Bright picket line. I'm not organizing a boycott. I have a real live-and-let-live attitude about it. But when pressed, I will confide that, for something so wonderful, this wasn't it. You have to laugh sometimes, how these things finally enter the mainstream vocabulary, what becomes exploitable, and what becomes lost. Sexual ecstasy is not something you buy. It cannot be bought. But we have come a long way. No question. Definitely. But it's not because of 'Sex and the City.' It's because of what real women have done in real lives, not on TV sets."

Love And Sex Sex Sex And The City