What you need to see, read, do this week: Al Green, undercover Green Day and ... "Poultrygeist: Night of the Chicken Dead." 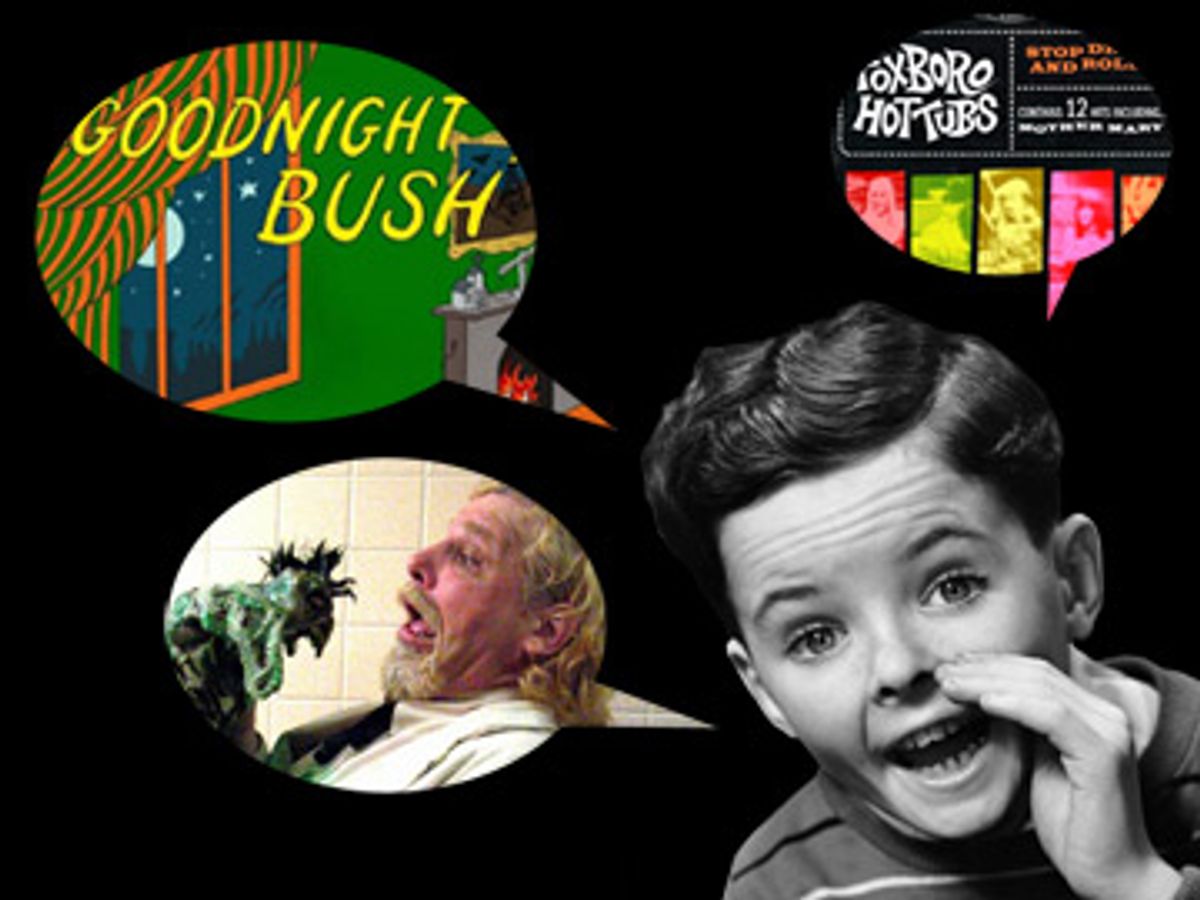 "Goodnight Bush: A Parody" by Erich Origen and Gan Golan
Seldom have an administration's failings been set to such a lulling cadence: "Goodnight Constitution/And goodnight evolution … Goodnight contractor beheading/Goodnight innocent bloodshedding ..." This unauthorized but highly welcome parody transforms the soporific imagery of Margaret Wise Brown's children's classic "Goodnight Moon" into the most spine-chilling bedtime story ever. The three little bears become war profiteers, the bowlful of mush is now "war in a rush," and the titular moon gives way to a refinery plume. Satirists Erich Origen and Gan Golan make all the expected textual points, but the book's real strength is its visuals, which harness Clement Hurd's original illustrations toward alarming ends: clear-cut forests, New Orleans floods, Lynndie England and, best of all, a wolfishly grinning Dick Cheney in an ermine-lined robe -- surely the scariest old lady ever to whisper "hush." -- Louis Bayard

Al Green's "Lay It Down"
Al Green could sing a parking ticket and leave no panties in the room dry. Over his 40-plus years in the music biz, the 62-year-old has always used his erotic, soul-drenched style to grab listeners. Songs, not as much. His masterpiece, the slinky classic "Let's Stay Together," for example, proved that his velvet purr and falsetto, coupled with the right arrangement, could transform sketchy sentiments into gospel truths. Tina Turner covered it successfully, but who else could? In 2003 Green reunited with Willie Mitchell, the producer of his early '70s hits, and made "I Can't Stop," an album whose steamy grooves came close to demonstrating that the past actually could be recaptured. In contrast, "Lay It Down" aims to bring Green up-to-date with the retro-soul revivalism of Amy Winehouse or Sharon Jones, pairing him with relative R&B tenderfoots John Legend, Anthony Hamilton and Corinne Bailey Rae, and Jones' horn section. But with Green giving a master class in reverend-like cadences, high notes and raspy outbursts over these passionate, down-tempo testaments -- "You've Got the Love I Need," "Stay With Me," "I'm Wild About You" -- the youngsters tend to fade. -- James Hannaham

"Poultrygeist: Night of the Chicken Dead"
If you're looking for some faux-1970s B-movie delight, my advice is to slide right on past Uwe Boll's overly obvious "Postal" and seek out the disgusting, deranged and thoroughly brilliant "Poultrygeist: Night of the Chicken Dead," the latest work of social criticism, bodily-fluid dispersion and generalized anarchy from "Toxic Avenger"/Troma Pictures impresario Lloyd Kaufman. Like the best of Kaufman's work, "Poultrygeist" will leave no viewer unoffended; it plays like a Monty Python mash-up of "Pet Sematary" and "Fast Food Nation," loaded with gratuitous slurs against lesbians, Muslims, Mexicans, rural whites and 60-year-old Jewish exploitation filmmakers. Not to mention singing, dancing and horrible undead chicken-monsters. (Now playing in New York; opens June 13 in Los Angeles.) -- Andrew O'Hehir

"The House at Midnight" by Lucie Whitehouse
This aptly titled novel is the sort of book you pick up desultorily a half-hour before bedtime and find yourself still reading at 3 a.m. It's the story of a group of friends in their 20s, not unlike the characters in Donna Tartt's "The Secret History," albeit post-collegiate. The narrator finally gets together romantically with her best friend, then decides she doesn't want him after all, especially since he inherited that creepy old mansion in the country and let a back-biting womanizer move in. Hovering on the windy side of the line between literature and trash, it's soapy, heartfelt, confessional and weirdly engrossing. -- Laura Miller

The Foxboro Hot Tubs' "Stop Drop and Roll"
Summer demands a soundtrack: music that makes you want to dance your Coppertone-slathered butt off, songs that are loud and fast and silly and strangely romantic. And coming just in time for longer days and hotter nights are Foxboro Hot Tubs. The songs from their "Stop Drop and Roll" have been quietly appearing and disappearing from the band's Web site for months now, but the album is at last available for your hair-flipping, zombie-stomping delectation. Full of fuzzy guitars, retro howls and relentlessly infectious beats, it's a homage to '60s pop that's fresh and timeless. Could the band's charm rest in its meticulous attention to the vinyl era, down to its clever ordering of songs into an A and B side? Could it be the sharp-yet-sweet lyrics that implore the listener to "hang in love from the gallows"? Or could it be the fact that this carelessly time-traveling garage band's alter ego is none other than Green Day? Whatever the reason, "Stop Drop and Roll" is as stinging and cool and welcome as Noxema on a Fourth of July sunburn. -- Mary Elizabeth Williams

"Control" and "Joy Division" DVDs
This week marks the DVD release of "Control," Anton Corbijn's superb, sensitive biopic of Ian Curtis, the lead singer of the influential U.K. postpunk outfit Joy Division, who committed suicide in 1980. Even if "Control" didn't happen to come to a theater near you, at least it made the rounds. Grant Gee's marvelous documentary "Joy Division" -- which, like "Control," has Miramax as a distributor -- never made it into theaters, and is being released on DVD only on June 17. Gee's documentary meshes beautifully with Corbijn's fictionalized take, detailing how the death of one band, Joy Division, gave birth to another, New Order. Together, the two pictures serve as a brilliant example of how fiction and nonfiction can support and enhance each other. And each movie, in its own distinctive way, pays tribute to a singer whose life was sadly cut short. -- Stephanie Zacharek