Will Clinton or Obama be voted off the island?

Puerto Rico may not provide Hillary Clinton with a national popular vote victory, much less those extra half-million votes Rob Reiner was talking about. 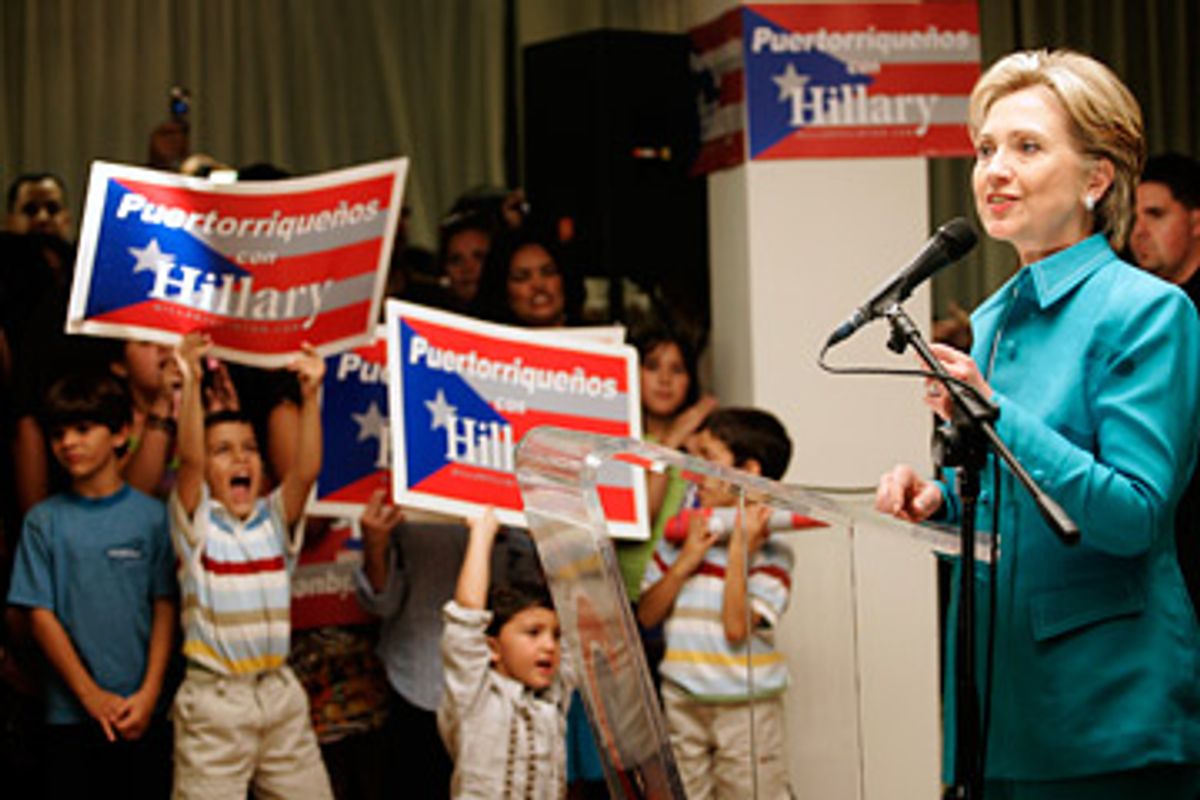 Even before the fireworks started, you could hear the political rally Thursday night from blocks away. Two live salsa bands alternated with a catchy jingle blaring from the speakers. The emcee exhorted the crowd -- all dressed in the official campaign colors -- to help put their candidate in a position of power in Washington. Police closed off the surrounding streets. There was free food. No question about it: Everybody was ready to get out there and vote.

Unfortunately for both Hillary Clinton and Barack Obama, the rally in downtown San Juan wasn't for either one of them. The catchy jingle was for Alfredo Salazar, the Popular Democratic Party's candidate for Puerto Rico's nonvoting "resident commissioner" in the U.S. House of Representatives. As was the emcee's fervent shout, "Tell your neighbor -- with Salazar in Congress, we'll achieve progress!" The candidate's banners declared, "For Puerto Rico, for your wallet -- the man of action in Washington!"

The whole rally was geared toward an event a little further down the line than Sunday's Democratic primary: the Nov. 4 general election, to be precise, in which Puerto Ricans can't vote for president but do have two hot local races to settle.

While the primary and its 55 delegates may be crucial for Clinton in particular -- she wants to win big amid heavy turnout to help edge Obama in the overall popular vote -- it could wind up being mostly an afterthought in Puerto Rican political culture. Centered on the island's status as a U.S. territory, local politics only vaguely matches up with the raging right-versus-left battles of the mainland. Many members of the two biggest political parties here, the PDP and the New Progressive Party, would consider themselves Democrats, not Republicans, but most voters don't waste much time thinking about either of the national parties. (Nearly all of Puerto Rico's few Republicans are members of the NPP.) Leaders of both local blocs are split between Clinton and Obama, and the mayors of some of the island's biggest cities are Republicans who aren't interested in the primary, so the powerful electoral machines that turn out Puerto Ricans in numbers that would shame even the most civic-minded U.S. states for the commonwealth's general elections (nearly 82 percent in 2004) won't be working at anything close to full blast.

Here's how confused the local-national relationship is: Both Salazar and his NPP rival for resident commissioner, Pedro Pierluisi, have endorsed Obama. Pierluisi is Obama's campaign co-chairman here, and someone in Salazar's entourage flashed an Obama banner from the stage Thursday night, the only real sign at the rally that there was another election to worry about before the November showdown.

So even though Hillary, Bill and Chelsea Clinton have spent enough time wandering around Puerto Rico over the last few weeks that you could easily confuse them with tourists who got a good rate on a family vacation package, it's looking like the turnout for Sunday's primary won't hit the mark Clinton needs to take a lead in the popular vote before the Democratic campaign finally lurches to an end on Tuesday. She may not even win with the kind of blowout margin that she's racked up in recent primaries in West Virginia and Kentucky, despite her familiarity among islanders built by Bill's eight years in the White House and her seven years representing more than a million nuyoricans in the Senate.

Some Clinton backers had been counting on Puerto Rico as a popular-vote mother lode, with its 2.4 million voters giving Hillary enough of a plurality to change the conversation, however briefly. As Clinton surrogate Rob Reiner said in April, "People don't understand that Puerto Rico has a lot of voters ... We can pick up 400,000-500,000 there with the popular vote."

That kind of number could give Clinton a national popular-vote victory over Obama even without including Florida's votes. But that number depends on both a turnout and a Clinton margin that may not be achievable. Clinton supporters have grasped at the fact that 2 million voters showed up for the commonwealth's 2004 gubernatorial election and at the lopsided margins among Latino voters in earlier primaries. But a poll in Wednesday's El Vocero newspaper put Clinton up just 51 to 38 in Puerto Rico, and 50 percent of the respondents said they didn't plan to vote at all. Even counting Florida's outlaw primary, Obama leads Clinton by 163,000 votes nationwide, so she needs to win by more than 16 points, with turnout topping 1 million, to make up that ground on Sunday.

Puerto Ricans do love elections, including primaries. "We had a million people go to the local party primaries last March, because there was this very really heated primary campaign for the PNP for governor," said Manuel Alvarez-Rivera, an expert in local elections who used to work for the Commonwealth Elections Commission (called, in Spanish, the State Elections Commission). But this Sunday's election doesn't seem to be stirring the same kind of passion. "People were really very, very excited [about the local primary] -- you could almost sense the tension in the air," he said. "This primary, it's almost a non-event." Alvarez predicts about 600,000 people will vote Sunday "plus or minus 100,000." The elections commission, he pointed out, usually orders three times the number of ballots they think they'll need; they've printed 1.8 million for the primary. Some local officials are predicting an even lower turnout.

Not that both campaigns aren't trying hard. Clinton will spend the entire weekend here, leaving only after the polls close on Sunday afternoon. News that the famous native and ex-Menudo star Ricky Martin had endorsed her was in Thursday's editions of the Spanish-language newspapers here, well before the campaign sent out a press release to national reporters in English. Meanwhile, Obama has an ad on Puerto Rican TV where he speaks entirely in Spanish, telling voters, "I was born on an island, and I understand that food, gas and everything costs more." A semi loaded with loudspeakers drove through downtown San Juan Thursday afternoon, steering clear of the touristy neighborhoods to blast loud pro-Obama announcements directly to residents. "Vote Sunday, brother," a volunteer told me in Spanish when I rolled down my window to listen. "Remember!"

There isn't much to differentiate the candidates on the issues that matter to locals. While the PDP supports the status quo -- Puerto Rico as a semiautonomous commonwealth -- and the NPP wants it to become a state, neither Clinton or Obama has endorsed either idea. Both say the island should decide its own future. (A small third party that supports independence has told its members to boycott Sunday's election.) Few of the electioneering posters and murals that usually dot the island before a local election are visible now (though the Obama campaign did manage to put up one sign outside the ritzy resort where Clinton is staying this weekend.)

Clinton has more of the island's superdelegates on her side, including the president of the local Democratic Party, also a member of the PDP, Roberto Prats Palerm. (Obama is backed by Gov. Anibal Acevedo Vila, of the PDP, but his indictment in April on corruption charges cut his political clout substantially.) Residents say they like what Clinton has done for Puerto Ricans in New York. "She's already pushing a lot of things for us puertorriqueños," said Melba Colon, a PDP member from San Juan who wandered by the Salazar rally Thursday night. What does she think of Obama? "I'm not going to say. You heard me? I'm not going to say." (If she did, she hinted, it wouldn't be anything particularly nice.)

But Obama's supporters are making a pragmatic argument: Clinton isn't going to win the nomination, so it doesn't matter what she says she'll do for boricuas as president; you may as well vote for the winner, even if he hasn't spent much time here. "I know he would have stayed longer, but he couldn't, because he has to campaign against McCain -- he has no choice," Pierluisi said in an interview. "I just hope that Puerto Rican people send a message of support to who I believe will be the next president of the United States." As long as Obama runs within 20 points of Clinton, his supporters won't feel too bad.

By now, the energy is starting to drop out of the campaign on the mainland, too; nearly half of Democrats in one recent poll said it was a bad thing that it was still going on. The race, actually, is starting to resemble Puerto Rico's other favorite blood sport besides politics. At the Club Gallistico de Puerto Rico, just outside San Juan, two roosters are sometimes evenly matched and their 15-minute fight ends in a draw. There’s no dramatic, grisly finish, only a sad, endless-seeming wait for the end of a bout that clearly won't be won decisively. While the crowd of bettors yell at each other, the birds just circle each other slowly, obviously exhausted, pecking and pecking away until the buzzer sounds and the referees separate them. The Democratic campaign can't end in a draw. But the primary in Puerto Rico looks like yet another election that fails to deliver a final blow for either side.